A Lesson in Social Tracking

For those of you who have been following this site for a while, you will note that I often talk about social as being more than just what you do on Facebook. I will tell you that what you do on your own social channels is insignificant in relation to what other people do about you. And I will tell you that measuring social is more than just tracking links from Twitter.

I detailed this (and more) in "The Mystery of Our Social Traffic". 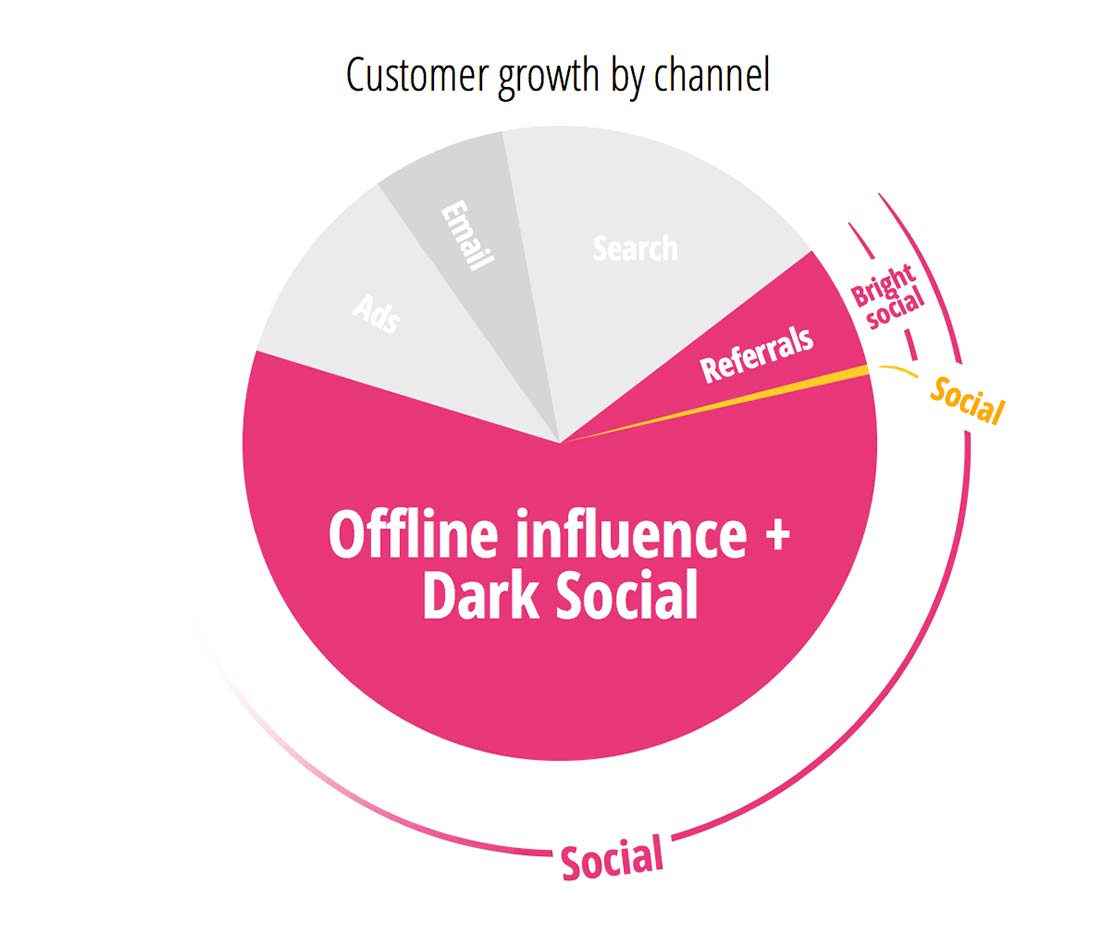 I see this for pretty much every single brand that I have worked with. But let me show you another example from this site.

One of the special things about Baekdal Plus is that it's designed in a way so that I can track sharing without the need for campaign variables or social buttons (which are often unreliable). When a subscriber shares an article, the URL itself identifies itself as being shared.

In other words, I can segment my analytics on only the traffic that arrives via sharing, by the URL itself. And this gives me tremendous insight into just how mixed real social sharing is.

Here is the breakdown for the first two quarters of 2014: 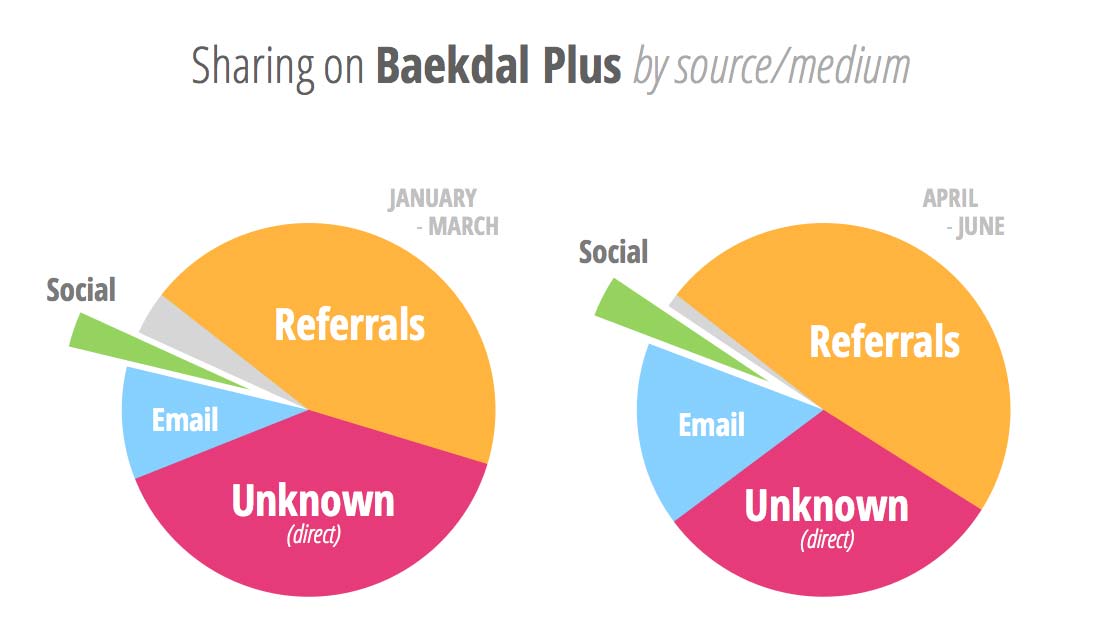 Remember, all of this traffic is 'shared'. What you see here is only the people who came to Baekdal Plus via a shared link from a subscriber. There is no organic traffic here, nor any search traffic. It's also ONLY traffic shared by other people than myself.

The first thing you will notice is that 'social' only represents 3-4% of the total. This is staggering considering that all of this is shared. So it's all social.

And the reason for this is that a shared link usual starts out being shared on Twitter/Facebook, but then it is picked up and reshared on other channels. But because our analytics systems can't track sources across people, this data ends up in our analytics as 3-4% social and 96% something else. And this is one of the main reasons why we are seeing such low numbers for 'social' sharing.

The largest source is the many forms of referrals. This changes dramatically from one month to the next. But sites like 'Pocket' are often scoring high, as are Reddit, but most of this shared traffic is from hundreds of individual sites, each not that big, but massive when combined.

Email is another big source. Again, remember, this is not from my newsletter (none of this is via my channels, only from others). In other words, this is when people are sharing a link to a Plus article in their newsletter.

Note: I'm keeping a close watch on these. Sharing a link to a Plus article in a newsletter is fine (and encouraged). But it's not okay to do it in a way so that you are essentially republishing my content. So far, however, I haven't experienced any misuse.

Then we have the big block of 'Unknown' traffic, or what most analytic services identify as being 'direct'. This, as you know, is when your analytics cannot identify where people are coming from.

There is absolutely no way that this is direct. Nobody would ever type this in, nor can this be traffic via bookmarks (since I'm tracking people and not views). So, essentially, this is what I call 'dark-social'. This is shared traffic that we have no idea what is.

And finally, we have 'other', which are listed as either something weird or 'not identified' in my analytics system. You will notice that this 'other' traffic is sometimes bigger than 'social'.

So, you see the problem here? All of this is shared traffic, originally shared by my subscribers, and then reshared by others. All of it is social, and yet, only 3-4% of it is identified as such.

And this is the key thing to understand about sharing. If you look at your sources, you are only learning about the last-point-of-sharing. Let me give you a simple example of this:

Here is what happened to just one link that was shared, by one of my subscribers on Twitter. In other words the first-point-of-sharing was 100% social, and via Twitter. Then some of his Twitter followers clicked on the link and some of them, in turn, decided to reshare it. Some did so via Twitter, others via Facebook or Google+, but increasingly the link spread outside the social channels and into blogs and media sites. 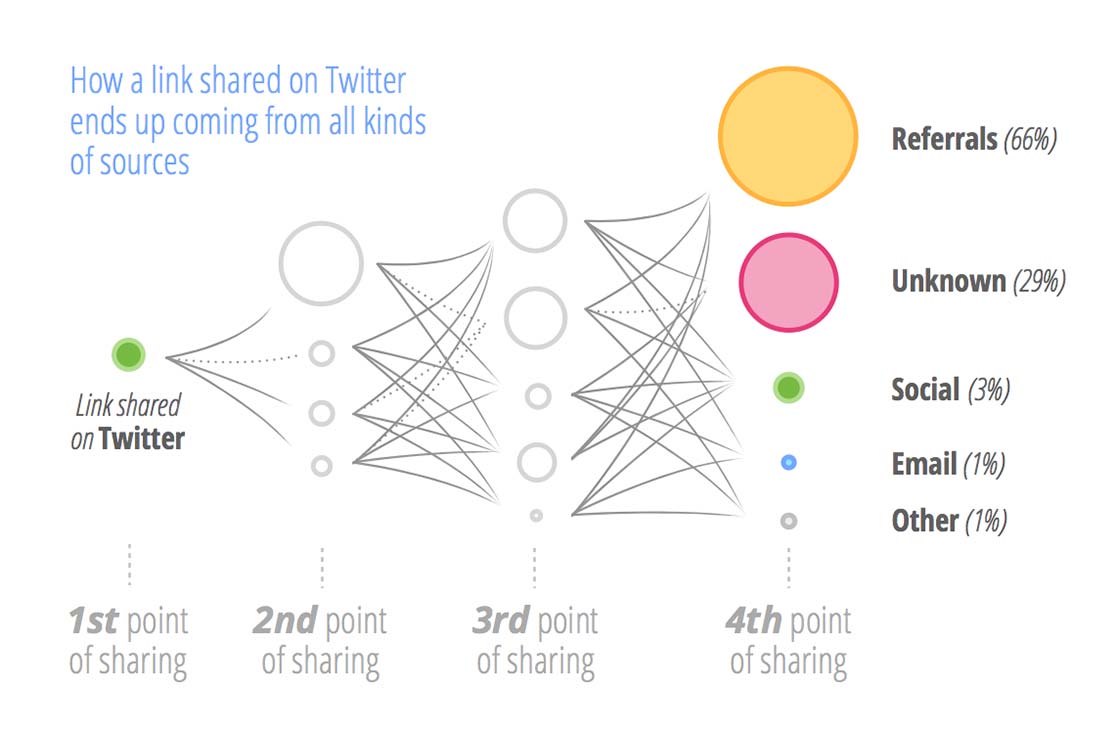 The result is that, what started out as someone tweeting a link, is now shared traffic coming from all kinds of sources. And because your analytics is only recording the last step, you have no idea that this link's traffic was originally caused by 100% social interaction.

Notice how, by the end, that only 3% is being reported as coming from social, but none of this would have happened if this subscriber hadn't tweeted the link to begin with.

Another way to look at this is by comparing Twitter Analytics, to the actual amount of sharing. When you use Twitter Cards, you get this nice breakdown of people sharing your content, and the individual tweets they shared.

Take a look at the first one. This person caused 196 clicks from just one tweet. That's wonderful, thank you! But because I can track individual links with Baekdal Plus, I can then compare this to my own analytics (UA). And it is reporting 669 clicks.

In other words, from just this one tweet. 196 clicks came directly from Twitter (original tweet + retweets), while another 473 clicks came from other sources via other forms of resharing. The true impact of social, for this tweet, is being underreported by 341%.

This leads us to a very important question. How important are your own social channels compared with sharing as a whole?

Obviously, there is no single answer as it depends on so many factors. The reason you interact with people socially is for the purpose of building up momentum, as I wrote about yesterday.

And the effect of your social channels depends on whether that momentum is also what you need, or if you would gain this through other means.

Take this site. I have never really spent any money on advertising this site. I started it in 2004, and from that it just grew slowly over time to what it is today. So, in that sense, all of my traffic is in some ways influenced by me. And if it wasn't because I had reached out an engaged with people on other channels (in the beginning on forums and community sites and today mostly via social sites), nothing I do today would have been possible.

Today, however, this site is fairly well known within my niche. And if I look at the cause of my new traffic and new subscriber over the past six months, almost none of it is caused by me. It is instead caused by other people sharing and resharing my articles.

So, in terms of growth, what I do on Twitter, Google+ or Facebook makes practically no difference to me anymore. Instead, my own social channels are focusing on 'nurturing' my existing readers. If almost all of my growth comes through other people, it's essential for me to nurture you, my readers, so that we have a tighter bond. And this is especially true for Twitter and Google+ where my most loyal readers spend most of their time.

Just to compare: Last month I posted a link on Twitter (that I could track), and compared that to all my shared traffic overall (per link). And the result was the link I posted got a generally high level of views, but it only represented 2% of the shared total.

So, what your strategy should be is different from every brand and every publisher. You have to look at where you are today, compared with where you are lacking in momentum and how good your existing connections are.

For some brands, your own channels might actually be more important. For instance, where do your most loyal customers discover what's new? In order for other people to start sharing something about you, they first have to know what you are doing, right?

It all depends on the nature of your relationship with your customers and the market you are in. For instance, I follow a number of brands on YouTube, and without those channels, I would never know that they were doing something new. It is my only source of contact.

My point is two things: First that, by only looking at the last-point of sharing, you often get a completely distorted picture of the real value of your social interactions. And secondly, that these social interactions often doesn't start with anything you are posting on Facebook or Twitter.

You must focus your social strategy on sharing itself, and less on whatever it is you are doing on your own social channels.