A Lesson in Traffic, Reads and Conversions

Views, reads, and conversions. It's such a complicated topic because they sound like they should have something in common, but often that's not the case. You can have an article with a ton of views, but with almost zero conversions. It's the age old problem of "I'd rather have three people see my content and proceed to buy my stuff, than have a hundred people see it, but only one of them buy," as Gary Vaynerchuk recently put it.

Let me show you a number of real examples from this site.

Last week I posted two articles that did fairly well. One was an article where I looked at AlexFromTarget, and the other was one where I told the media that they were old. The screenshot below is from my CMS system.

As you can see, both of these articles were free, and both of them had about the same amount of views. But notice the read-rates. This is the rate of people who read the entire article. The story about Alex had a much higher read-rate (48%) than the story about newspapers (33%).

Note: The average read-rate for all articles is 34%.

What can we learn from this?

We can learn that looking at views alone is a poor metric for how an article performs. It's far more interesting to look at what this traffic does. This is why many publishers are now starting to focus on 'attention minutes' as the new audience metric. I wrote more about this in "Valuing Traffic Beyond Attention Minutes"

We can also learn that the length of the content doesn't correlate with attention. You will notice that both articles are about 1,500 words in length. But, visually, the Alex article is almost twice as long because of all the images. But this has little influence on read-rates. In this case, the longer article (visually) has the highest read-rate.

I sometimes hear from publishers that they think people are less interested in an article if it appears too long. But I have never seen that, nor have I ever experience that on this site.

Or to be more precise. I do not see any correlation between initial attention and length. For instance, this is the attention graph for the past 50 articles compared with their length. 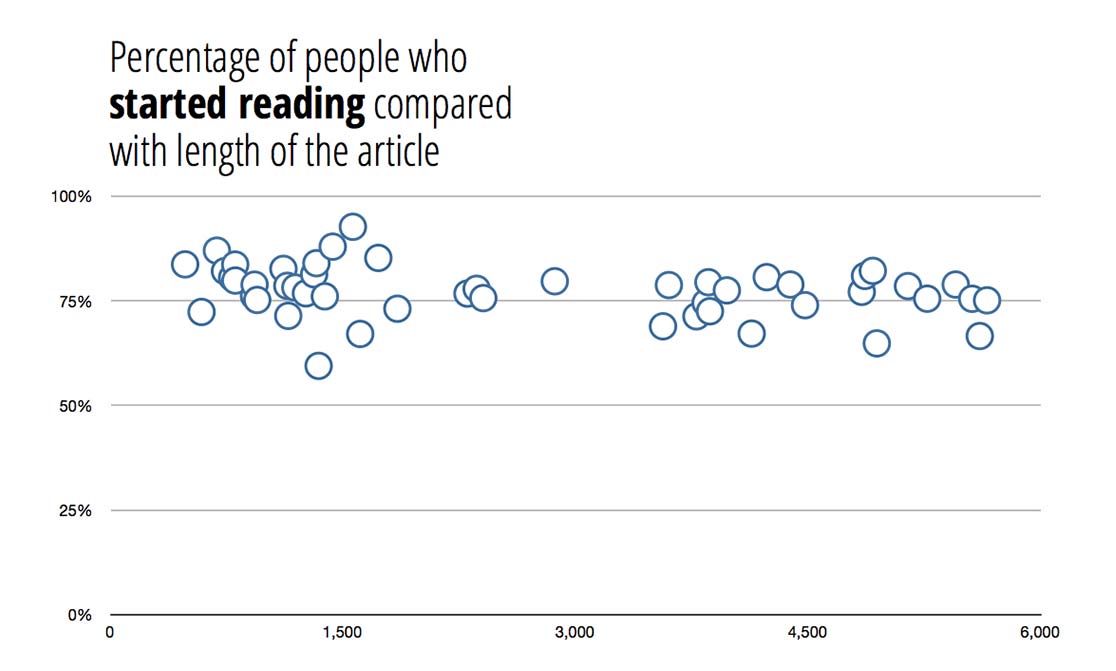 As you can see, the level of initialattention is around 75%-80%, regardless of how long an article is.

Another interesting thing is to look at how people are glancing at an article. Does that change with length? Well, not really. At least not on this site.

Here are the percentages of people who merely glance at an article, but never took the time to read it. As you can see, length seems to have no influence on this. 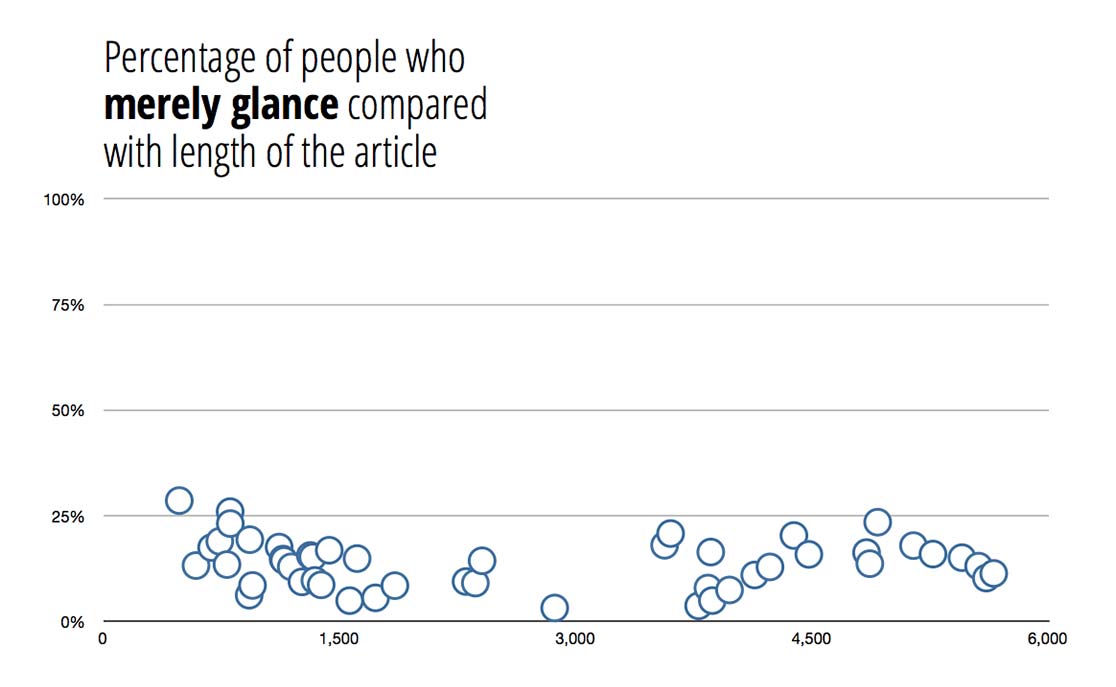 What we are left with are our 'lost readers', as in the number of people who started reading the article but for some reason never finished it. And here we do see a negative effect by length.

Here is the graph for lost readers on this site, compared with the length of the articles. As you can see, the shorter the article, the less of a loss of readers... but only to a point. There is no real difference above 1,500 words 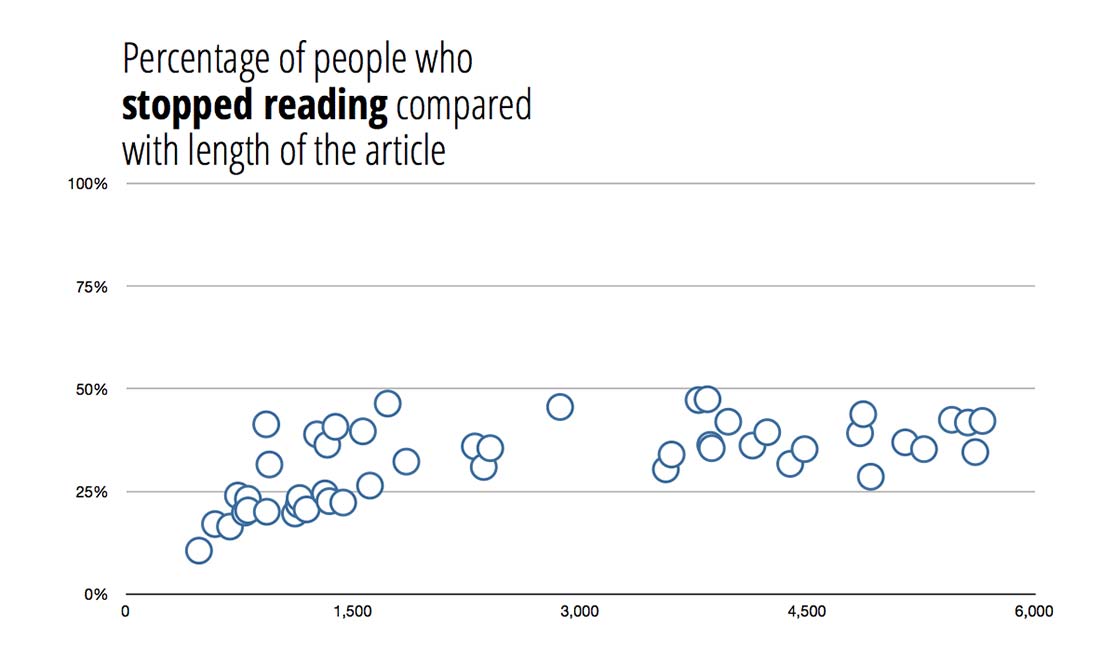 Obviously, these graphs are all for the articles I'm posting here on this site, and my articles are of a different nature and written for a target audience are media professionals. Entertainment sites based scale and monetized via advertising, for instance, follows very different reading patterns.

There is one thing missing from all of this. What about conversions? A conversion can, on this site, be three things.

Note: If you are monetized by advertising you would have other conversion metrics.

How do conversions fit into views, length and read rates?

Take a look at the two articles mentioned at the start of this article. Which one do you think has the highest conversion rate? The one with slightly more views and a 48% read-rate? Or the one with only a 33% read-rate?

You can probably guess from how I'm leading the question that the article with the highest level of conversions isn't the 'Alex From Target' article. In fact, that article has almost zero conversions, while the other one about newspapers did fairly well.

This is something I see with all my articles. I cannot identify any correlation between how well an article will do in terms of conversions and how well it did for its other metrics. Views, length, or read-rate have a low impact on conversions, especially for articles that are so similar in traffic numbers as the two above.

Obviously, you are likely to have a higher number of conversions if your 'mass' is higher. And it's obviously also a good thing to have people read it. An article with no views or readers wouldn't convert anything at all, but it's rarely because of traffic that people convert. And this is specifically true for publishers. Nobody decides to subscribe to a magazine after just reading a single article. That's not how it works. You have to build up momentum.

The main reason why people convert comes down to momentum gained based on personal value and level of recommendation. And the articles above are a good example of that.

The article about 'Alex From Target' was interesting to a lot of people simply because of all the buzz that was happening around it. But it wasn't something people could use. As such, it was something that was nice to know, but not necessarily something you needed to know. Add that the majority of the social activity that happened around that article came from people interested in the whole 'Alex' controversy, and not the media professionals who are my usual target market.

The combination of those two things was an article with 13,000 views, but almost zero conversions.

In comparison, the article about newspapers being old was about a topic that media professionals have to deal with every single day. As such, it had a high level of personal value to those who read it. But at the same time, the article was so narrow in scope that most people simply didn't bother to read it.

But none of that mattered because, in terms of conversions, personal value and interest far outranks read-rates. As such the narrower focus created exactly the kind of conversion that I need to position Baekdal Plus as a source worth subscribing to.

The best Plus article all year

Sometimes, of course, you just nail it and you end up with the best of both worlds. You get both a ton of traffic and a very high level of conversions. One example of that was when I wrote "What If Quality Journalism Isn't?" 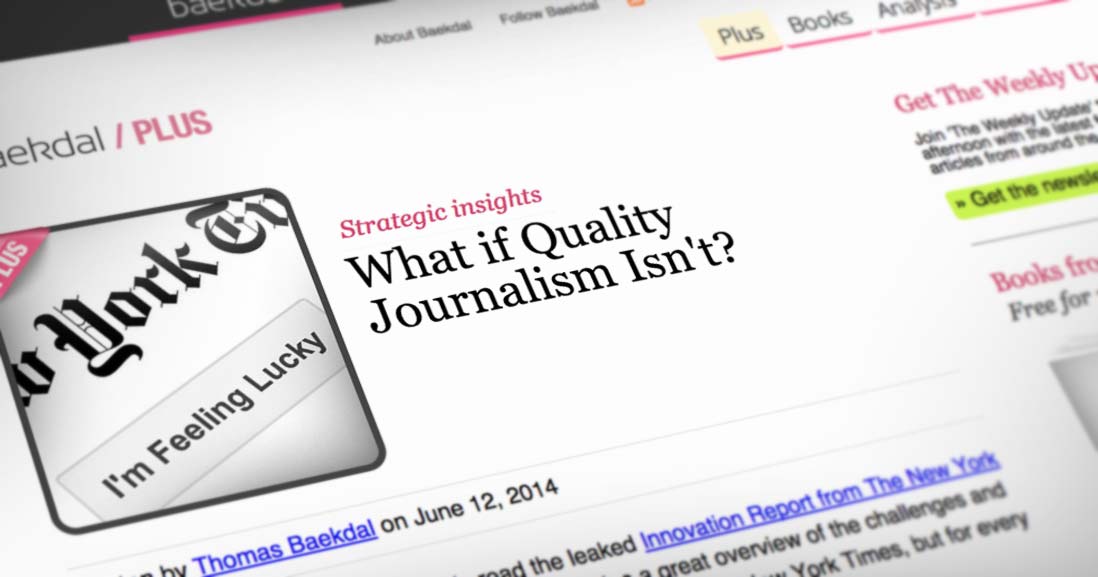 This article has been viewed more than 215,000 times and has a conversion rate that is more than 10 times higher than any other article this year. That's just remarkable... and yet, its read-rate is one of the lowest of all my plus articles, at only 20%.

Ten times the conversion rate is pretty spectacular, but a 20% read-rate is rather abysmal for a Plus article.

What's going on here? Well, there is an interesting story to this, which is something I also observe quite often. Viral traffic is only valuable when it's targeted.

That article started out having a really high read-rate of about 60%, which lasted for the first 50-75,000 views. This was because it was shared and discussed by several people in the media industry, thus reaching exactly the type of people who were interested in this topic. And pretty much all of the amazing conversions happened within those initial 50-75,000 views as well.

In short, all the views from 75,000 and up were practically meaningless. It's fun to have, but it didn't help my business in any way. The conversions weren't there, people didn't read it, and the same for the return rates. Only the initial 50-75,000 views made a difference, and only those initial views created conversions.

Obviously, if you are monetized by advertising, all of this would be different. Advertising based media would profit from all the 215,000 views because it matters less that the article isn't causing high read-rates throughout its life. For media supported by advertising, you would look at actions, attention, and general exposure. And you would also listen to your advertisers to get a feel for if they are getting a good ROI as a result.

You can't just look at a single metric, nor can you automatically correlate one metric with another. You have to think about the behavior that causes it to happen in the first place.