After I started posting about analytics data from Twitter, several of my readers have asked me what the heck that was. Thus, in this simply guide I'm going to show what it is, and you can get it too (well, kind of).

First of all, here is where you can find Twitter Analytics.

Well, there are three ways:

First way: Either you are awesome, and Twitter has somehow just given you access. This is the case for some of the people I know (but I was not one of them), and I have no idea why. Maybe it is because they have a verified account?

Second way: Partner with Twitter advertising. But, this is only available for some. For instance, when I try to do it, I'm greeted with this message:

Thank you for your interest in Twitter Ads. At this time, the platform that is best suited to serve your advertising needs is not available. We will be in touch when these offerings are available.

Third way: Implement Twitter cards on your site. Obviously this is only possible if you have a site that is content based, which I do. But even at that you need to be manually approved. For me, this took more than a month, and I had almost gave up on them.

They approved my use of Twitter cards after about a week, but I still didn't have access to analytics. And it took another four weeks before I could finally see it. During all this, there were no communications from Twitter at all.

However, I now have access. But I have no idea if that's just because of my site, or if this applies to anyone else as well. So, try it...

Can you, for instance, see the number of times your tweet is seen? Or how many unique people that is? Or how many times people see your profile?

The answer to all of those are... no! But you can see some other interesting things.

The first interesting thing you can see is how each tweet performs in relation to favorites, retweets and replies. Basically, the same thing that you can see by clicking on each individual tweet. But in Twitter analytics you can see it as a nice list, order by great, good, or all.

More important though is the you can also see the number of clicks each link received. This is basically the same as what you get from Facebook Insights.

Note: I need to test this. I'm suspecting that they are measuring the t.co activity in general, and not just clicks on that specific tweet.

You can also get a lot of useful insight into your followers. You can see the count of mentions in 6-hour increments, as well as how many people followed and unfollowed.

You can see the total followers, just like if you were using tools like TweetCounter (not really that useful).

But, then you also get this fabulous page detailing the interest and demographics of your followers. 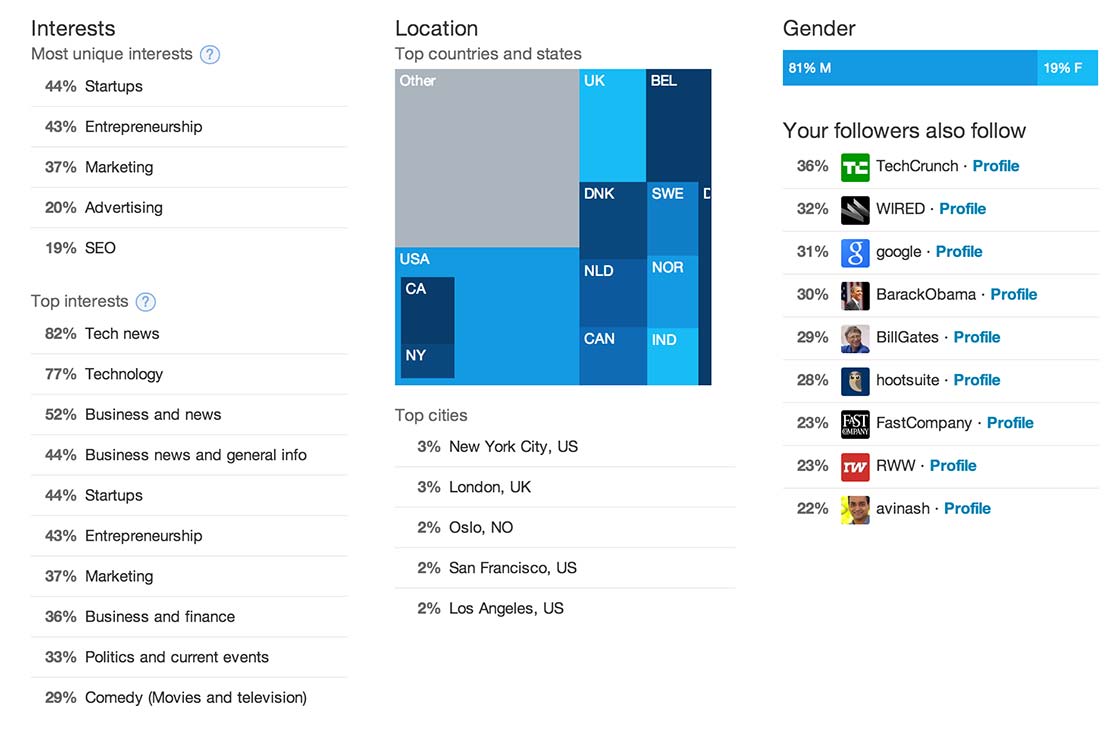 As you can see, my followers are mostly interested in startups, entrepreneurship, marketing and advertising. Not to mention tech in general. I'm wondering why it doesn't say 'news media/magazine' but maybe that's not a category?

I can also that my followers are mostly coming from 'Other', which is a very clear illustration that I'm truly global. I can see that 81% are male (*snif* ... I need more women ;)). And that my followers are also following Wired, Google, Bill Gates and Avinash. In other words, I have some pretty smart followers!

Isn't this an awesome page?

But now we come to the really awesome stuff. Twitter Cards Analytics.

Twitter Cards Analytics does something that I wish we had on all the other social networks. It allows you to track not just the tweet you post to your site, but what everyone tweets about your site.

Here is an example:

This shows you all the tweets, posted by anyone, that includes a link to baekdal.com. So, during this specific period, 204 tweets have been posted. This generated 65,491 impressions, causing 465 clicks, and 50 retweets. And this is from anyone on Twitter. And the small bubbles underneath are the tweets that specifically came from @baekdal.

This is just crazy awesome. Imagine you could get this from Facebook?

You can also see this as a nice graph, detailing tweets, impressions and URL clicks, again from anyone posting a link to your site on Twitter. It's brilliant.

But it gets better. Yes, better. Because Twitter will also tell you who tweeted a link to your site. Remember, this is not about the @baekdal Twitter account. This is about the links. So these include people linking to one of my articles, without even mentioning @baekdal in the tweet. 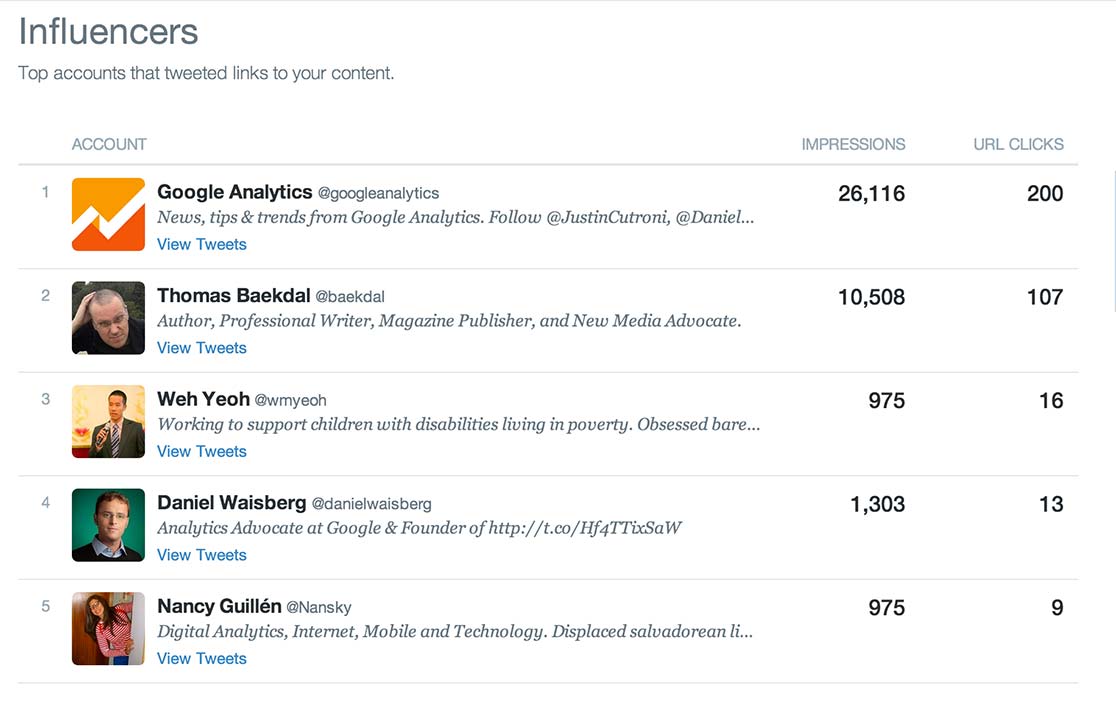 And you can see the tweets themselves, ordered by the best tweets first. Again, notice the second one. Here Weh Yeoh tweeted a link to one of my old articles, without mentioning me at all. 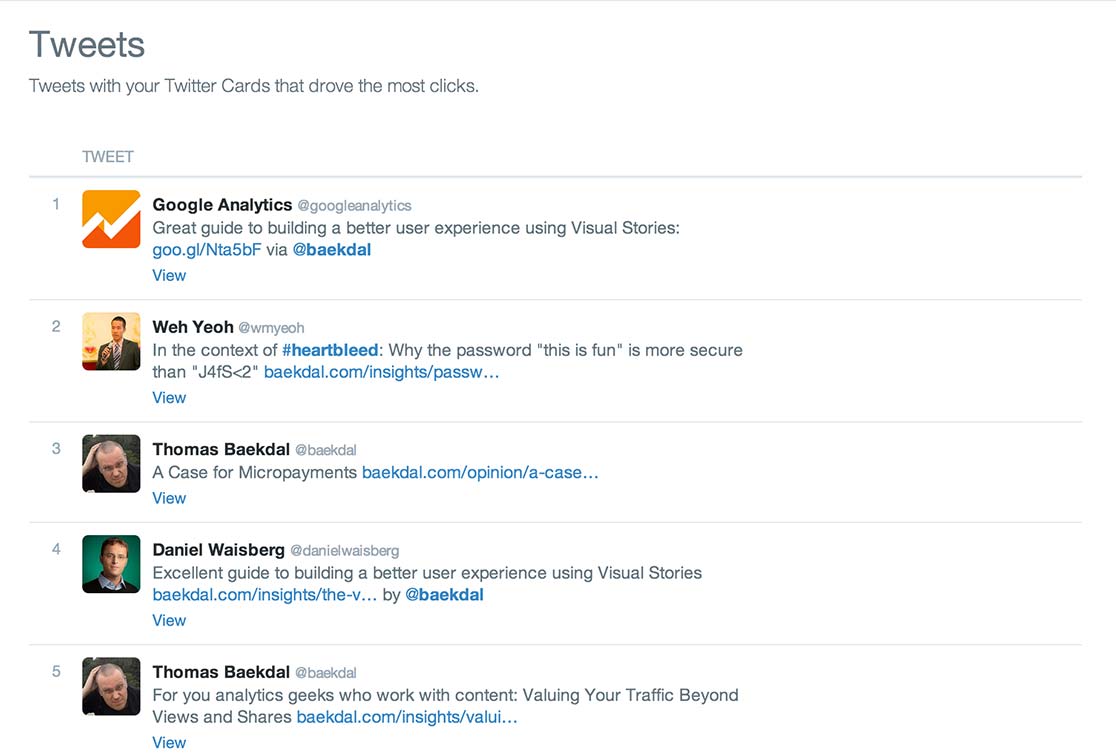 And, you can flip it and instead look at it on a URL level. As you can see, my Plus article about visual storytelling has performed rather well over the past week. 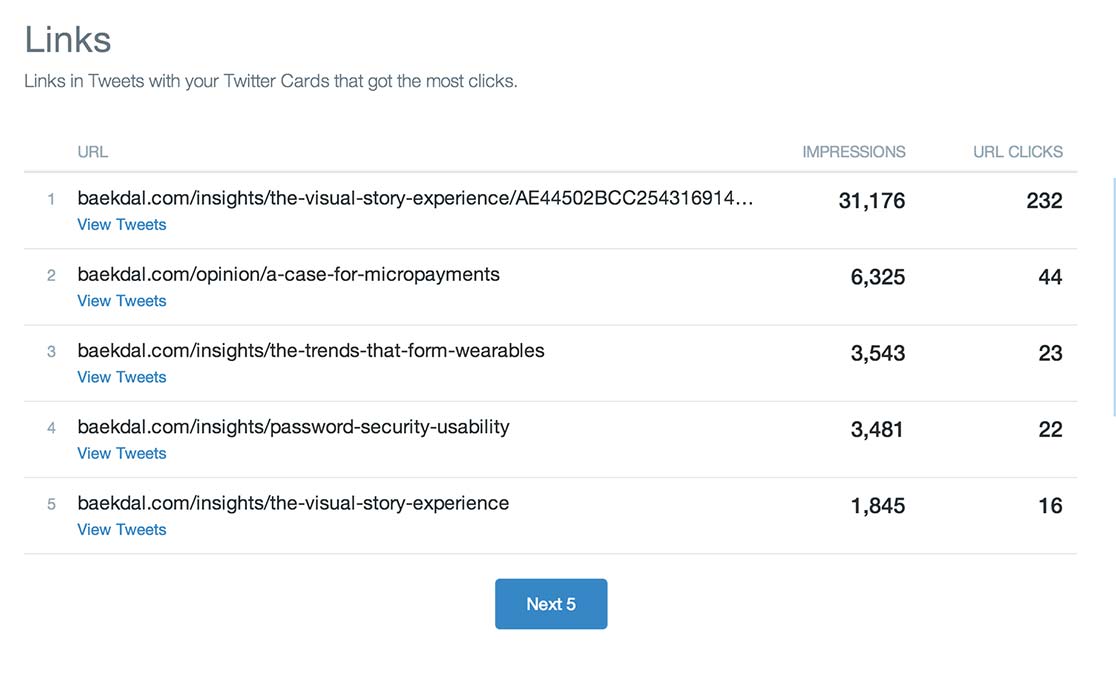 You can also see how each of your card format performs, in relation to everyone else (awesome), but since I have only implemented the 'Summary Card' I can only see the one. 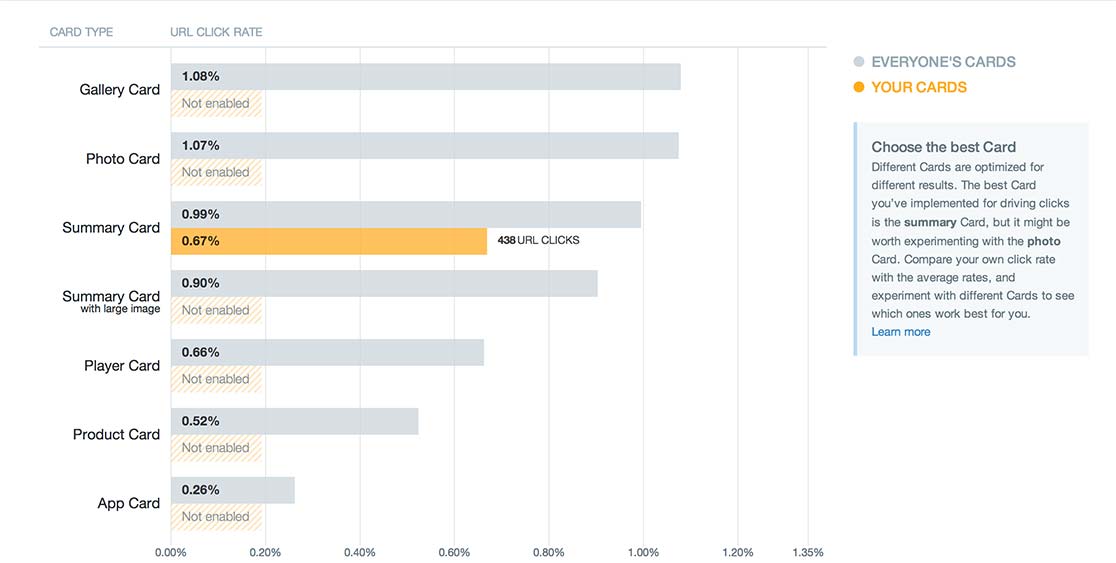 And this wasn't enough, all of the above is focused on URL clicks. But you can also focus it on retweets or app installs, and you will get all the same stats recalculated for those.

It's not perfect though. There are a number really big problems. As I mention to begin with, you have almost no Twitter Profile analytics. And, it's a bit shallow.

The main problem being that you can't measure 'people'. Knowing that you had 65,000 impressions doesn't tell you anything unless you also know how many people that is. That's like measuring pageviews on a site, without knowing how many unique visitors you have. It can give you an indication of movement or a pattern, but it can't be used for much specifically.

Also, there is the question of how Twitter is measuring this. My Tweetdeck is open on my Mac all day, so does Twitter assume that I see every tweet? How does it know which tweets people see?

On Facebook, it's measured by looking at how many posts that it fetches. It loads 6 posts when you load the page, which are all counted as seen regardless if you actually scroll down or not. And then it loads another 6 when you scroll down, which are also counted.

But how does Twitter do it? Knowing this can have a huge impact on how accurate the numbers can be assumed to be. And I just don't know (yet).

But I truly love Twitter Card analytics. It's not just about what I tweet, but also what others tweet about me. And as I wrote in my recent report about social strategies, that type of thinking is critical to your social success.

Anyway, I hope I answered all your questions.