How many clicks did Associated Press' sponsored tweet campaign get? Let's look at the numbers.

Two days ago, the Associated Press announced that they had started selling sponsored tweets to Samsung.

The Associated Press announced today that Samsung will be the first company to provide sponsored tweets to the news agency's primary Twitter account.

I wrote about it here, and detailed why it would never work. They are competing directly with twitter, using Twitter's infrastructure to cover their cost, and that simply isn't going to fly. Twitter has already blocked it via their API, so it's only a matter of time before they close this loophole too.

We will not allow any third party to inject paid tweets into a timeline on any service that leverages the Twitter API. We are updating our Terms of Service to articulate clearly what we mean by this statement, and we encourage you to read the updated API Terms of Service to be released shortly.

Why are we prohibiting these kinds of ads? First, third party ad networks are not necessarily looking to preserve the unique user experience Twitter has created. They may optimize for either market share or short-term revenue at the expense of the long-term health of the Twitter platform. For example, a third party ad network may seek to maximize ad impressions and click through rates even if it leads to a net decrease in Twitter use due to user dissatisfaction.

Secondly, the basis for building a lasting advertising network that benefits users should be innovation, not near-term monetization. Twitter is uniquely dependent on and responsible for the long-term health and value of the platform. Accordingly, a necessary focus of Promoted Tweets is to explore ways to create value for our users. Third party ad networks may be optimized for near-term monetization at the expense of innovating or creating the best user experience. We believe it is our responsibility to encourage creative product development and to curb practices that compromise innovation.

It is important to keep in mind that Twitter bears all the costs of maintaining the network, protecting the Tweet stream against spam, supporting user requests, and scaling the service. Indeed, Twitter will bear many of the support costs associated with any third-party paid Tweets, as Twitter receives support emails related to anything a user sees in a tweet stream. The third-party bears few of these costs by comparison.

The same arguments can be used to shut down media companies selling sponsored tweets outside Twitter.

What might be even more interesting is how these sponsored tweets are doing. How many clicks did they generate? It turns out that since the Associated Press is using bit.ly to shorten the links, we can see exactly how they are doing.

So far, three sponsored tweets have emerged in their stream: 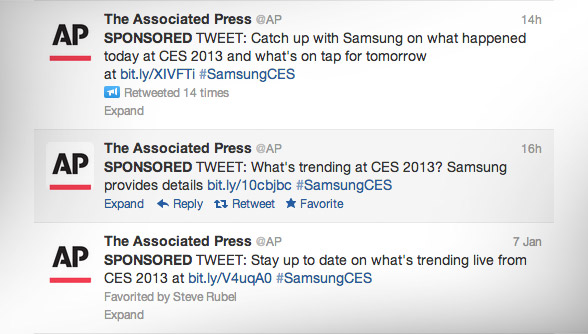 As the Associated Press wrote "The effort builds on AP's expansion into new advertising for mobile and social media. The AP's flagship Twitter account has more than 1.5 million followers."

That sounds impressive doesn't it? But of course, everyone who works with social media knows that the number of followers are useless as a measurement of expected results. First of all, only a fraction of those will ever see the tweet, and the rest might not care that much.

I don't know how much Samsung has paid the Associated Press (I'm guessing it is a lot), but I cannot imagine that this would ever have produced a positive ROI.

Here is the data for these three tweets: 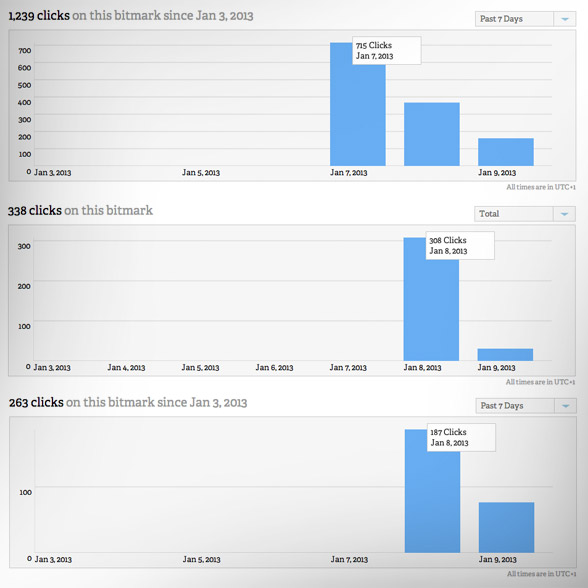 As you can see, the first tweet reached 1,239 clicks, but that was largely because several media sites wrote about it, and embedded the tweet within their articles. This caused a lot of media professionals to click on it to see what it was about. So those doesn't count.

But after that, the real impact is clearly visible as the subsequent tweets received very little response, and it's dropping. And there are still 4 more days to go for this campaign.

Is it just me? Or does it sometimes feel like the whole of the internet is screaming at the news industry: 'Jeez, you guys really need to innovate more and hurry up and get yourself a new business model.' And then the response to any attempt at a new model is 'But not that one.'

It was a funny article, but that's exactly how this is. Yes, the Associated Press needs a new business model, but it isn't this one.

I have said this before, but the challenge faced by the news industry is that everything we do can be measured. And let's face it. Most of the old advertising market works because people don't know that they are losing money.

For instance, it is said that TV commercials only generate a positive ROI for 18% of the ads. Meaning that 82% of the market is based on a mistaken belief of value.

On the internet, where everything can be measured, this 'game' doesn't work.

I wrote about this in "The Non-Future of Advertising", in which you can read how Mel Karmazin, president of Viacom, believed advertising should work:

"You buy a commercial in the Super Bowl, you're going to pay two and one-half million dollars for the spot. I have no idea if it's going to work. You pay your money, you take your chances."

But this approach only works if the brands have no way of measuring the result. It's time to not only rethink advertising, but also readjust your expectations for how effective it will be.

The Associated Press might have 1.5 million followers. But the value of those followers is only around 300 clicks per tweet.

Arguably, this is not just the fault of the Associated Press. The tweets themselves also convey no value to the listener. You have no idea what it is about unless you click on it. That is not a very good way to write a tweet.

What Samsung should have done was to use the tweet to provide interesting news. Like "Samsung teams up with Chelsea Football Club: [link] #SamsungCES". Instead of just tweeting: "Stay up to date on what's trending live from CES 2013".

If Samsung had done this, the click-through rate would likely have been higher. But even with that, and with the diminishing cost of advertising for brands, I don't see how this could ever be a profitable business model for newspapers.

It works for Twitter, but only because they are a platform and thus control the long tail. As a single publisher, even one as big as the Associated Press, the numbers just don't add up.

If you want to make money from advertising, you have to make it special and unique, and it has to be targeted against a real outcome.