Dissecting an Episode of MythBusters

MythBusters is an excellent TV show on Discovery Channel, in which Adam, Jamie, Kari, Tory, and Grant test popular myths. That show, like so many other shows, is designed for a TV time-slot. It has to be a certain length. There has to be a certain number of breaks, at certain times etc.

But most people probably do not realize just the tactics that go into making an episode. So just for fun, let us dissect a show, and see what we can learn from it.

One hour time-slot, once per week

First, let us look at how much time MythBusters spend on the actual show itself vs. all the other things. By timing each individual thing, we get this neat graph. 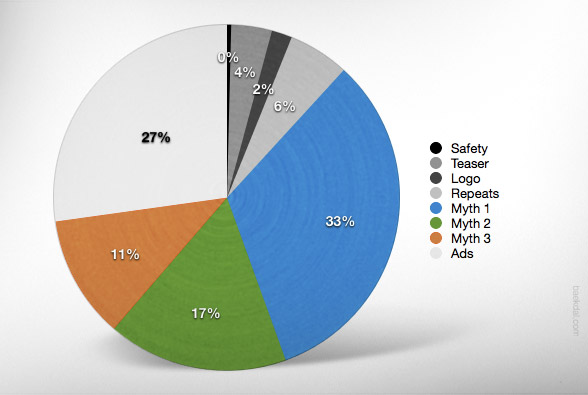 They spend 4% of the time talking about what is "coming up next," 2% of time showing the MythBuster logo, and 6% repeating something they have already said - e.g. when returning from a commercial break.

All of that is just filler content. It doesn't actually provide you with any value.

But then comes the real shocker. 27% of the time is spent watching advertising. Everyone hates advertising online, but the time your spend looking at ads on a website is tiny in comparison to the massive amount of advertising you are exposed to on TV.

For every single hour, you spend 16 minutes watching advertising.

Putting it all together

Even more interesting is how they then put it all together. How do you get people to watch 16 minutes of advertising, every hour?

It is all about tactics.

If that doesn't get you hooked to, MythBusters also start off the second myth - giving you two reasons to stay on the channel. By this point, you have invested 12 minutes of your time. There is no chance the you are going to turn away now.

Now that you are hooked, it is time to bring in the commercial break. But again, here we see even more tactics.

They bring as many ads as they can. But, just short of you being annoyed by them, they return you to the show for another 2 minutes of the first myth, only to immediately having another commercial break.

This period of commercial breaks is actually 10 minutes long.

At this point, you are very close to being really fed up by all the ads. And MythBusters knows it. So, they return you to the show, and give you another long uninterrupted period of entertainment.

Followed by another commercial break.

Now it is time to start the third myth. Which is a short 5 minute piece, interrupted by another commercial break.

Then to return the continuation of the first myth - and another commercial break. At this point, the interruptions don't really matter anymore. You have already invested most of the hour getting this far.

And then we reach the end of the show, where we finally learn the results of the first myth.

There you have it. The tactics involved in creating one hour of MythBusters.

Also, because they have to fit the show into a one-hour time slot, there are a lot really interesting content they had to cut out. This content is instead published on the website for fans to "snack on."

There is actually a lot of it. For the first myth of this episode, Mythbusters have uploaded more content to the website than what they could fit into the show itself.

The real question now is. What do you do when the TV world turn digital, and you no longer have to fit everything into a time slot because everything is on-demand? But, that is a topic for another article.