Earlier today I was reading Pev Research's report on "Older Adults and Social Media," and how that age group has doubled in size. It's a fascinating report.

It then struck me that it would be more interesting to compare the actual population numbers from US Census Bureau, with the latest social media usage numbers - for all age groups.

That's the really interesting number. We always see usage graphs listing the quantity of users, but most of them don't compare it to how many people who are actually alive within each age group.

What I didn't expect to find was that people lie a lot about their age. The numbers being reported by Facebook doesn't add up. According to them, more than 100% of the population, age 15-25, use Facebook. That's not actually possible.

Here are the graphs for USA and UK: 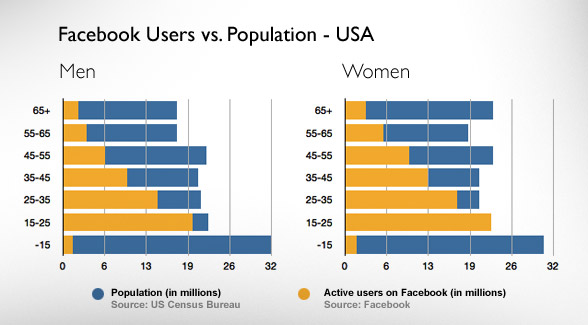 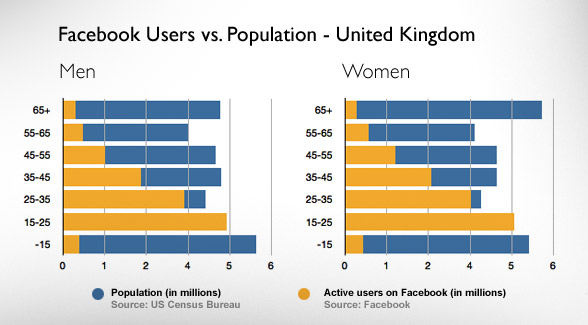 But, there is an easy explanation. People lie about their age, especially of you are under 13 years old.

As you might know, you have to be at least 13 years old to sign up for Facebook. But we all know that a lot kids below that age use it too. They simply sign up telling Facebook that they are 17 or 20 years old.

This explains why the 15-25 age group is artificially inflated, and why there is such a significant drop when looking at the age groups below 15.

Note: Facebook is clearly aware of this behavior, as they are using it to defend themselves in a recent lawsuit.

While I believe this is the primary reason, the stats are also skewed by people having more than one account. I have 3 + 5 dummy accounts for clients (used for administration purposes). For each of these, the age is set to match the target market.

Note: A number of people also think this might be caused by old men telling girls they are 18, for unethical reason. But, while that is disgusting, I don't think they make up a significant number (but I have no data to support either claim).

We also have people telling the world that they are younger than what they really are. Like when a 34 year old person say she is only 24.

This clearly indicates just how inaccurate our social stats really are. It's not that Facebook is lying about the numbers; the problem is that people aren't being completely honest about their age.

I think the numbers above 35 are pretty accurate, but it gets complicated below that.

Keep in mind that there is an old saying in the world of marketing, it's not about how old people really are; it's about how old they feel.

The kids below 13 are clearly lying about their age to gain access, and that skews the numbers dramatically. But, if a person who is really 34 is indicating that she is only 24, you must threat her as a 24 your old person. That's how old she feels, and that is the only thing you need to know.

Real age is overrated. And apparently, so is social media statistics.