A couple of days ago, several tweets pointed me towards a blog post by Jeff Bullas, with the "fact" that 32% of all Facebook users earn more than $100,000 - which is spectacular. The only problem is that it is not true.

Jeff is a good guy, but in his post he used a number of very questionable sources, and mixed that together to create what appeared to be facts. Facebook's numbers (in the US) according to Jeff Bullas are:

Let's go through one-by-one to illustrate what the problem is, and see whether we can find the real numbers.

Might be true, but it really depends on the source of analytics. Compete list them as number three, Alexa put them as number to, Hitwise put as number one a while back. They are definitely up there, but there is so much variance between each 3rd party analytics company that we really cannot be sure.

This is the first place where things start to get really wrong. Jeff is not comparing the same sized groups.

He says that 55-65 year olds are the smallest group, and the second smallest group is 13-17. But there is ten-year time span between 55-65, but only four year timespan between 13-17. Those two groups are not comparable.

I did a study about Facebook's users a while back, where I used numbers supplied directly by Facebook - the result was this:

Note: It's important to note that I found that teenagers lie about their age, skewing the results, and that Facebook doesn't support detailed data about people below 13 (who are no tallowed to join, but do so anyway), or people above 65.

Using this data, we suddenly see a very different picture. The biggest groups of both male and female are 15-24 year olds.

The actual age of a Facebook user is illustrated in the graph below. This graph uses data supplied directly by Facebook, and it paints a very different picture.

Only 37% of Facebook's users are 35 or older, and the average age is 32 years old. It is a far cry from the numbers Jeff reported.

But, wait a minute, there is something odd about this graph. Facebook does not allow teenagers under the age of 13 to use their service, but we all know that they do so anyway. And Facebook groups together everyone above 65.

So if we adjust for the age grouping of people above 65, and the many teenagers that lie about their age, the graph looks something like this (estimated).

Now the average age is 31 years old, and we can also see that the biggest group is 15-25 years old.

Finally, how much do a Facebook user earn? Jeff reports that 32% earn over $100,000, but that is simply impossible.

The mistake Jeff made was to look at 3rd party analytics companies for answers, like Quantcast, Compete, Hitwise, Alexa etc. They are all trying to give you website data, and they are all completely wrong.

In July, most of these services estimated that Reddit had only about one million users, but then Reddit sent Mashable a screenshot of their Google Analytics dashboard, clearly showing the real number was eight million.

We have seen the same thing from Digg, and just recently Google's Reader team debunked the story that RSS usage was dropping (it isn't)

Earlier this year I studied this site, and found Compete and Quantcast to be highly inaccurate. Quantcast, specifically, seems to be living in a different world. Their numbers are so far from reality that they can possibly get.

Jeff Bullas turned to Quantcast, and they gave him the wrong numbers. 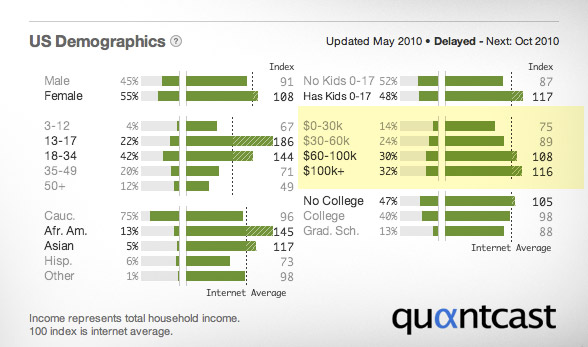 ...or compare it to Google's Ad planner. It gives a completely different set of numbers; numbers that are much closer to what we get from US Census Bureau.

An even bigger problem is that Jeff compared individual Facebook users to "household income". Those two are incomparable. He should have compared it to personal income.

There is a huge difference between an individual earning $100,000+, and a family of five where each parent earns $55,000 each. Both give you a household income of $100,000+, but only the individual have any real purchasing power.

We don't really know what the right number is, but it is definitely not 32%. Considering that the US Census Bureau reports it to be 6.24% for the population as a whole, and that Facebook's active user base is relatively young, I would estimate it to be below that - maybe 5%.

The lesson is: Do not trust 3rd party analytics from companies like Compete, Quantcast, Hitwise, Alexa etc. They haven't the faintest idea what is really going on.

It is still an estimate, but much closer to reality than the numbers posted by Jeff. Again, I don't think Jeff tried to deceive anyone, he simply used untrustworthy data sources, and made the wrong conclusions on that basis.

Note: He also posted a data for Twitter, Linkedin, YouTube, and MySpace. I have not analyzed them, but considering that they are based on the same data as his Facebook numbers, it is safe to say that they are wrong too.