The Trouble With Ad Spending Studies

Every month we see these studies illustrating the change in ad spending. A recent one is from eMarketer, which illustrate a significant growth in mobile. 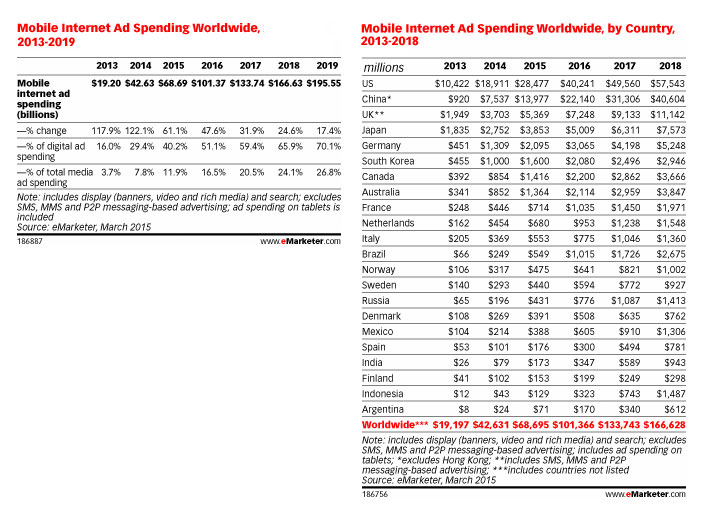 There are four things to keep in mind here, though.

First of all, how does this relate to the total ad spending across all channels? Is that also increasing, and if so, by how much?

The reason is that we often get sidetracked by all these amazing numbers that we forget to consider where it is coming from. Brands, generally speaking, don't spend that much more on advertising per year (some reports that it's up 3.2% in the US overall). So for digital and mobile to grow by that much, the money has to come from other channels that must then be in decline.

The eMarketer study doesn't look at that, but we know from other studies that the loser here is print (with traditional TV flattening out and starting to experience difficulties in keeping up the momentum).

Secondly, each of these studies has very different views on what is mobile and what is not. Is an iPad part of mobile, even though the behavior we see on those devices much more closely mimics that of laptops than smartphones? The eMarketer's study includes tablets, but others don't.

And what about laptops? There is a huge difference between the old desktop computer which was locked to a desk in a specific room, and a MacBook that people use on their couch. So, is mobile defined by the device, the behavior or the size of the screen? In other words, is mobile advertising a form where normal display advertising can't fit the screen?

You see the problem with this in terms of simplifying it in a study?

Thirdly, there are different opinions about what defines ad spending. Is ad spending only the money brands spend paying for placing the ads? What about the other activity? If you create an Instagram account for your brand, is that advertising for your brand, or marketing? When you ask brands about their advertising budgets, some define that as the total cost, whereas others only define it as the ad placement cost.

Finally, there is a considerable mismatch between studies, in terms of what numbers they report. Let me give you a couple of examples.

eMarketer reports that mobile ad spending in the US, in 2015, is $28.5 billion, which is 40.2% of the total digital share. Meanwhile a similar study by Strategy Analytics reports that digital ad spending in 2015 is $52.8 billion, which leaves $21 billion for mobile. That's 25% lower than eMarketer's numbers. Meanwhile, MyersBizNet estimates 2015 mobile ad spending to be $12 billion. And Business Insider Intelligence estimates 2015 numbers to be $18 billion.

And we see this across pretty much all the studies. They are all over the place in terms of what the exact numbers are.

The same is true for looking ahead. eMarketer estimates that mobile ad spending in the US will be $57.7 billion, while Business Insider Intelligence estimates it at $41 billion.

The trends are the same, but the numbers vary quite a bit.

So, all of these studies are interesting from a trend perspective, although neither of them of should come as a surprise to you. Ad spending is almost always reactive by nature and several years behind the usage patterns. But don't dwell too much on the numbers. Focus on the patterns and the trends, and then relate that to your specific business.

Mobile is very important, but how it's important differs quite a bit between companies.