Top Media Sharing in the US

Yesterday I posted about the new media analytics tool from Bit.ly. It allows you to see from where people share stories for the 10 largest media publishers, by US states, segmented into the four categories: Newspapers, TV/Radio, Magazines and Online only.

It's a truly fascinating tool because sharing is in many ways a more insightful tool than visitors or page views. Sharing can be linked to interest. Pageviews cannot (at least not directly). 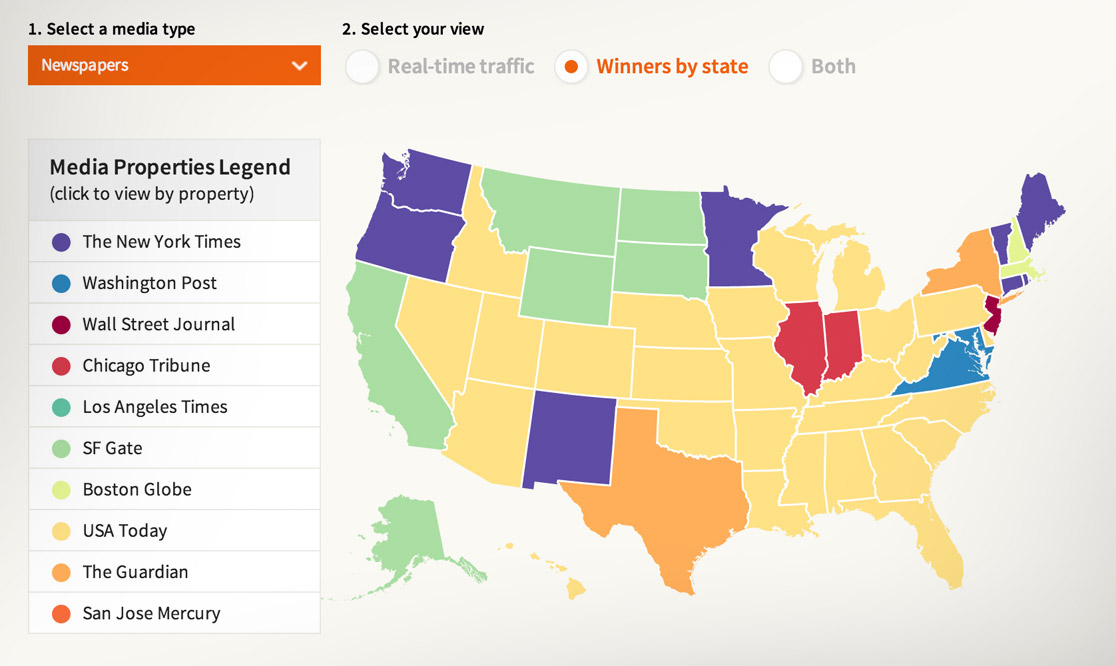 And looking at the data reveals both highly predictable patterns, but also several surprises. For instance, it's not really that surprising that the Chicago Tribune and LA Times are mostly read in only those cities: 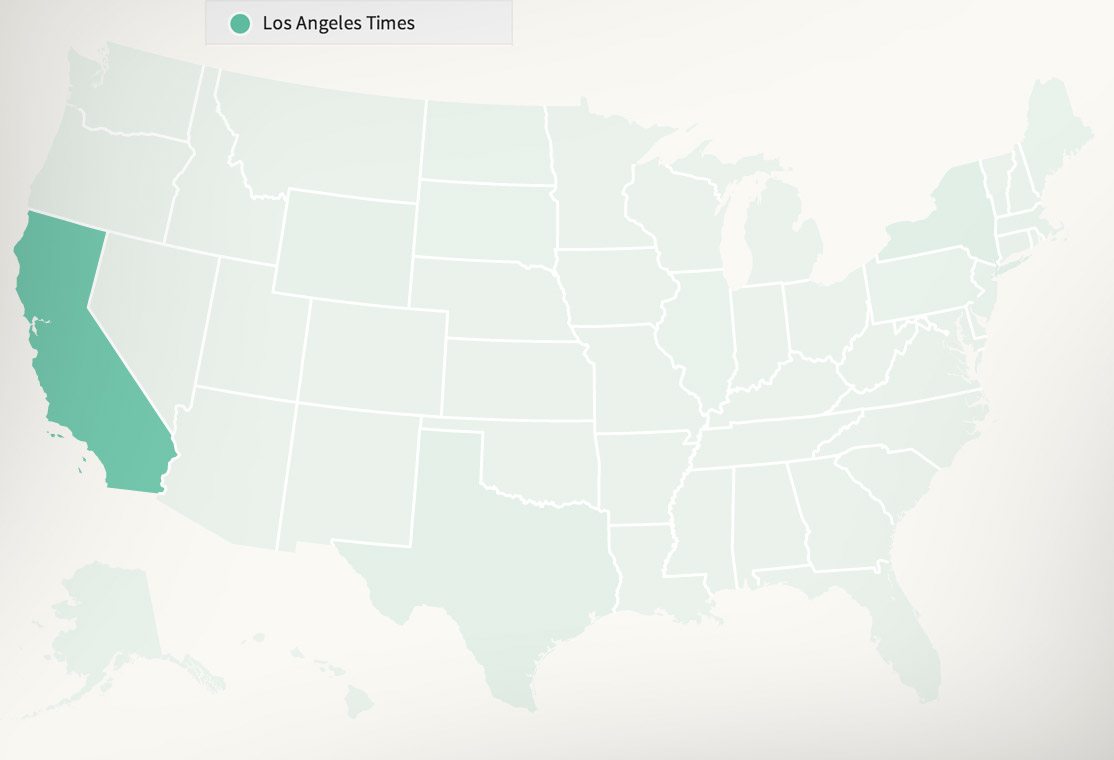 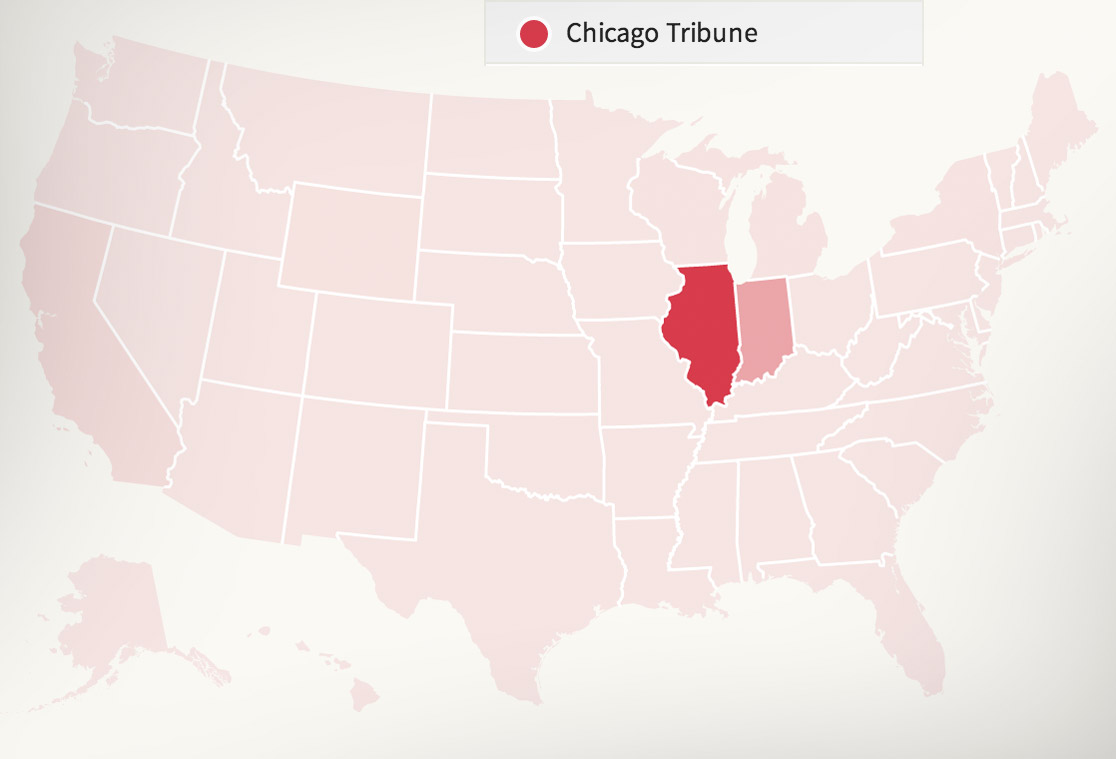 Nor would it surprise you that Fox News is centered in the southeast, home to most of the Republican voters. (Nor that Al Jazeera is mostly read in states that don't read Fox news). 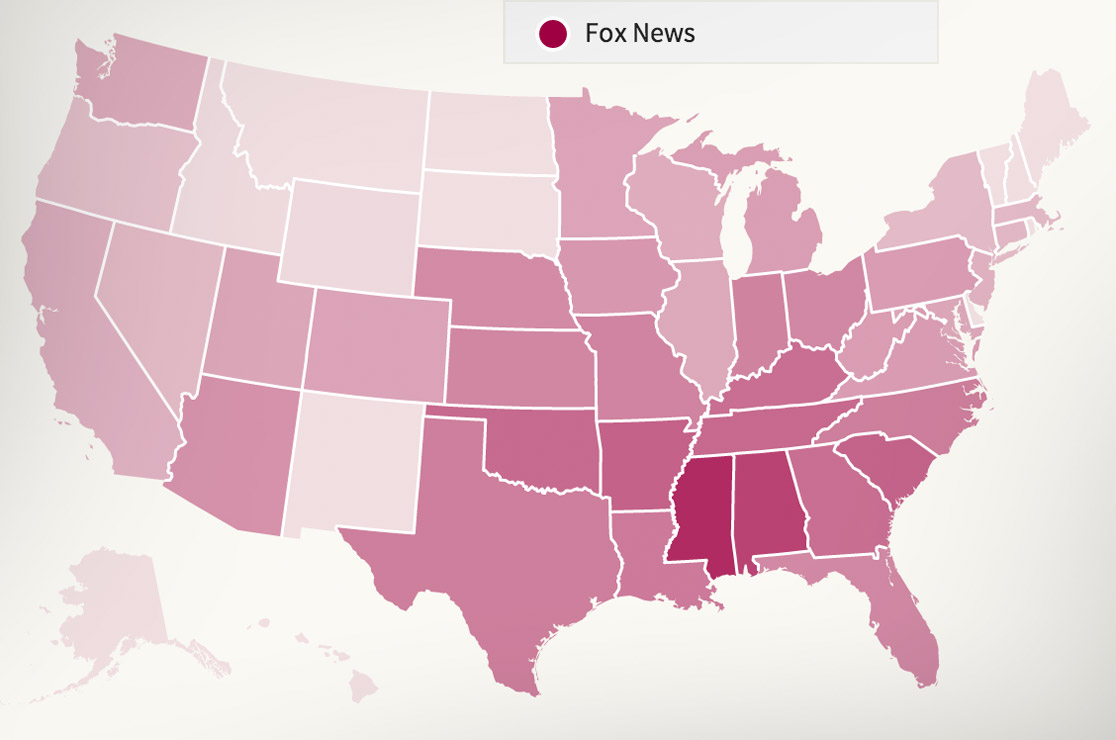 What may surprise some is that NY Times' reach is not centered around New York but has transformed itself to become a national (global) newspaper. 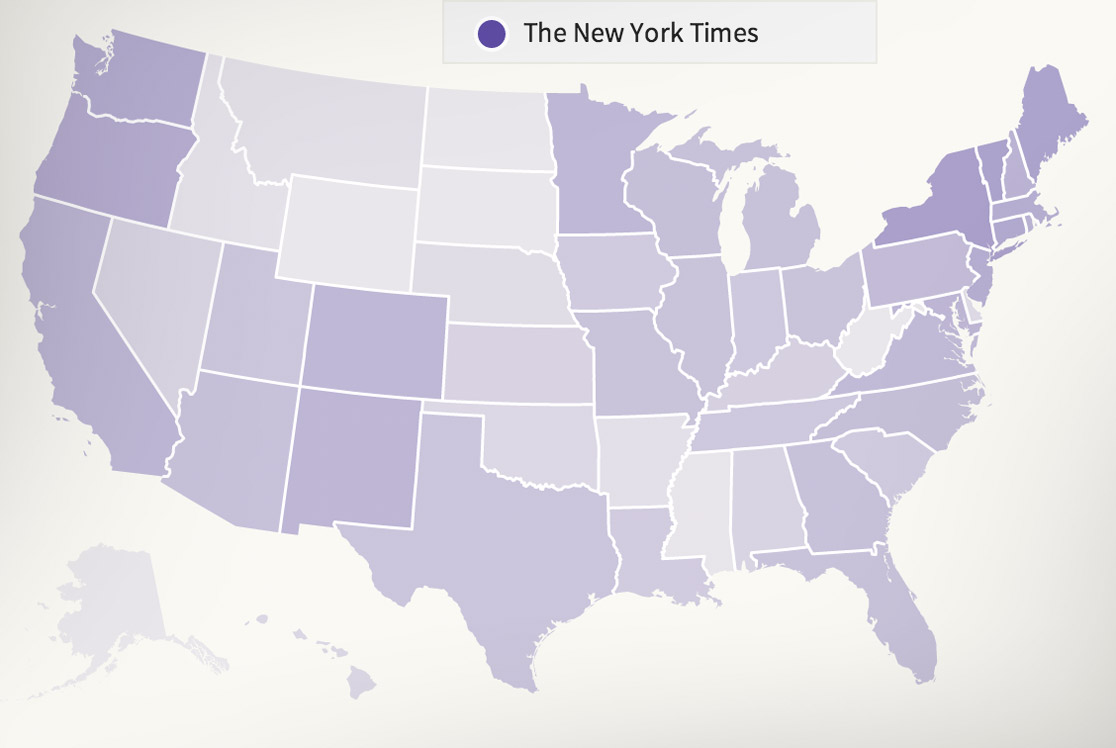 Looking at online media, we find that sites Like Huffington Post is read across the US, while tech sites like Techcrunch and Mashable are centered around Silicon Valley, Seattle, Chicago and New York (the major tech centers). Nothing surprising here, except perhaps how profound this polarization is. 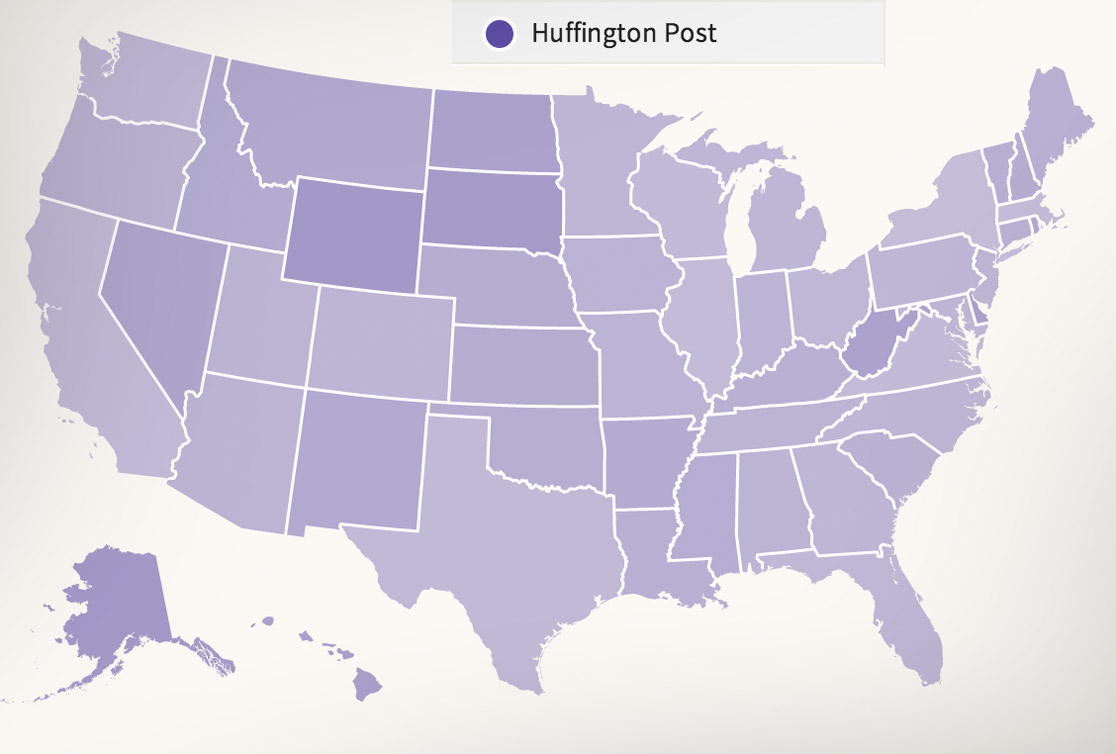 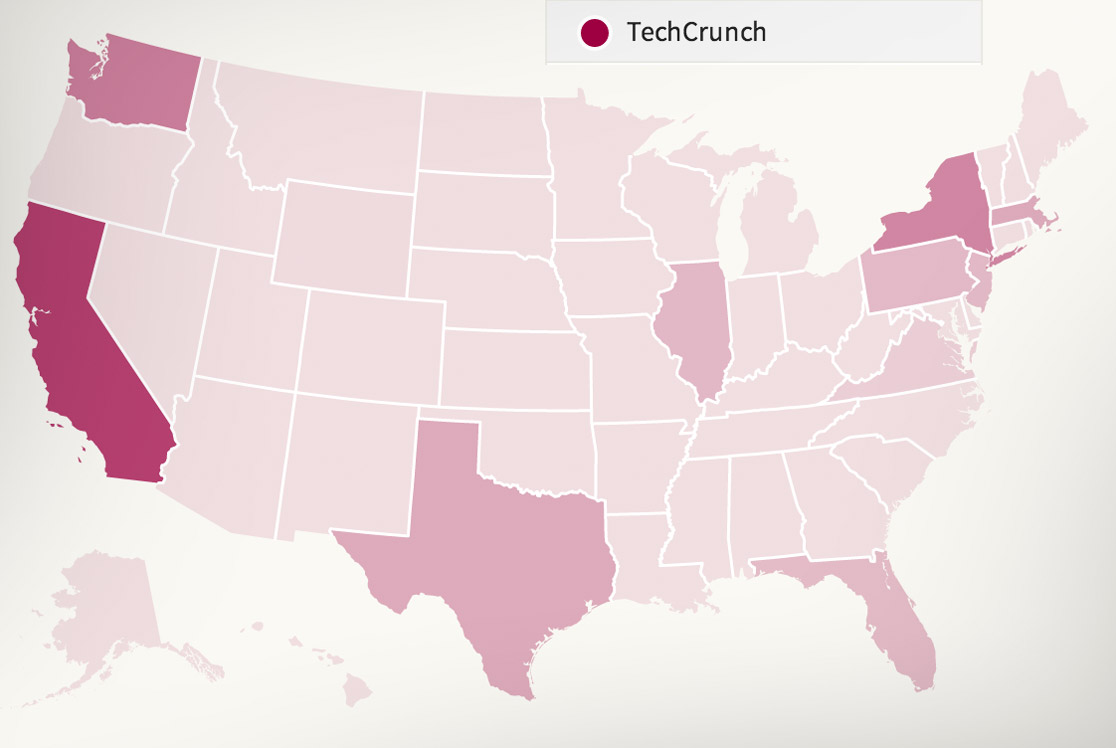 One thing that might surprise you, though, is the Guardian. As we all know, the Guardian has experienced tremendous success in the US, with 11.8 million unique visitors in October in the US alone.

As as a mainstream newspaper you would assume it would follow the patterns of NY Times or Huffington Post, Right? But no. The Guardian follows exactly the same pattern as that of the tech press. 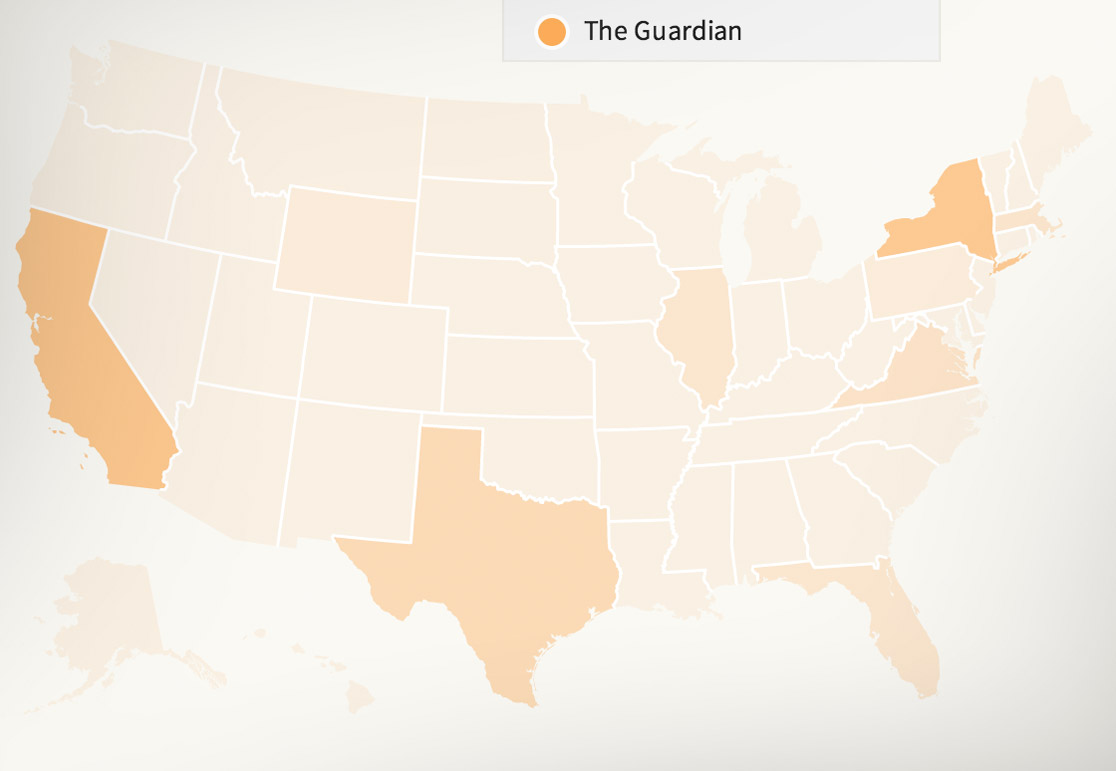 It kind of puts the whole Guardian success story into perspective. As a mass-market newspaper it has a long way to go, but in covering Snowden and NSA (all tech issues) it has attracted a lot of tech attention (of which it is not making any money from).

And the really cool thing about this visualization is that it is updated live. While it used to be a static image, the new media map is built on top of Bit.ly's data stream. So you can check back at any time to see how things change.

It will be very interesting to see, e.g. if the Guardian manages to use its newfound fame to spread outside the tech circles, or if the LA Times will remain confined to the west coast.

Keep in mind though that this map does not take population density into consideration, nor all the normal sharing that is happening directly via Twitter.