Yesterday, the social community was buzzing with about a new study from Brightedge (PDF) who made the rather starling conclusion that "Tweet buttons drive 7x more link mentions to websites."

They even go on to claim, "The unprecedented examination revealed that pages that display Twitter share buttons or links were distributed to followers on average about seven times more often than pages that did not have similar sharing tools. This is a significant difference that could lead to exposure to millions of additional consumers for sites that took the modest step of just installing social sharing buttons."

What a load of crap!

The problem is the age old problem of correlation and causation. As Avinash Kaushik once wrote,

What Brightedge has done is to look at 4 million random tweets, checked for the presence of just one element, and then decided that it was what caused it.

The reason why people share can be attributed to many things. The main reasons are because people want to share what you do. You product is worth sharing. But it is very important for brands to have social mindset, actively engage with their audience, and encourage sharing in many different ways. As a subset of encouraging people to share, you could add a tweet button to your site. 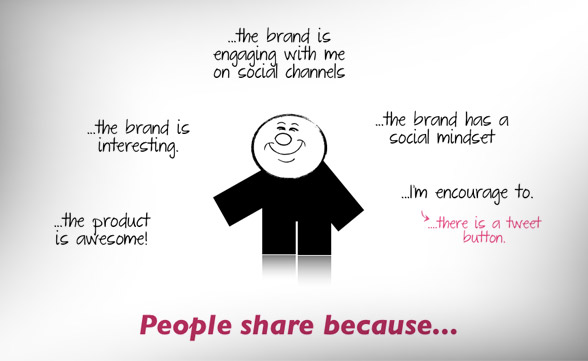 Brightedge looked at the full social effect and then concluded it is all caused by just adding a button. You don't have to be a social media expert to see just how wrong that assumption is.

There is absolutely no way a boring page, from a passive company, with an uninteresting product can get a 700% increase in sharing (reaching millions of additional consumers) just by adding a tweet button.

What this study really found was that brands with a high social engagement, are more likely to have also added a tweet button to their site.

I'm not saying that the tweet button doesn't have any effect. It is very useful. It is encouraging people to act. But in order to get a 700% increase in anything you have to give people a reason.

Note: I wonder if they also included retweets in their study as it would have drastically skewed the results. One tweet from a tweet button, retweeted by 20 friends, would show up as 21 tweets button interactions. I reached out to Brightedge for an answer, but they haven't responded.