Making usable graphs is not as simple as it sounds because usable graphs are highly rich on detail, while showing a general trend. But, adding too much detail will make it hard to read, and you see the wrong trends if you don't.

The trick to creating a usable graph is to make it technically inaccurate in a way so people can understand how things really are.

Let's look at a real world example. I manage several web projects, and I often have to quantify my success or failure based on people - more precisely the amount of unique people who visit a site or web application.

Usually I get a list of numbers of unique people visiting the site every day for - say - the last 6 months. Like this: 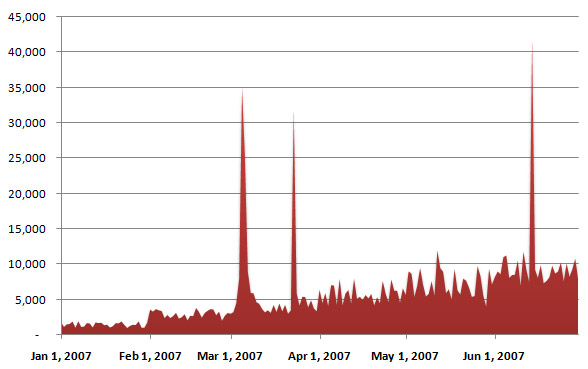 But, this graph has too much detail. You can see an upward trend, but it is hard to figure out what it really is because of the huge fluctuations each day. This is not a good way to present a visitor trend.

When faced with this problem most people and statistical systems turn to a more general view. Instead of looking at people per day, they look at "average people per day for each month". This creates a much better graph. It is highly readable, easy to understand - and very wrong.

It is wrong because of March and June. Both months have "traffic spikes" - single days where a huge amount of people visited the site. Although such occasions are fun, there are also one-time wonders. It is by people who visited the site and never returned. They were not turned into loyal fans or potential clients. They probably do not even remember you anymore.

As a trend they must be removed. They have very little impact on the daily traffic. Technically March was a good month, but in reality April was much better - and June was much worse that it seems.

Never include special occasions in your overall trend.

To get a real idea of how things are going, we need to create an inaccurate graph.

Here is one example: 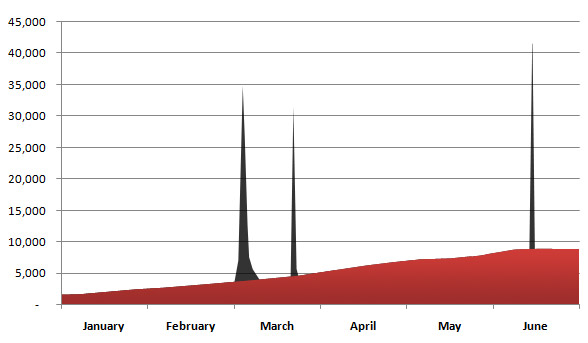 You can easily see that the general traffic has increased over the period - although slightly leveling out in June. And secondary you can see the 3 traffic spikes.

BTW: The spikes are important because it makes people feel good ("look what we did!!!"), but displayed secondary because they are not a part of the general trend.

This graph is usable and provides an accurate picture - although it is technically inaccurate.

It applies to any graph

This was just one example but the concept applies to every graph. To show people how things really are you need to take a hard look at the data. Distinguish between the general trend and the special occasions.