Earlier today, Facebook released per post analytics for all Facebook Pages. Up until now, this has been something that was limited to pages with 10,000+ likes. But what is it, and what does it really mean?

Post impressions is a count of how many times individual posts have been seen throughout Facebook (on your wall or on people's own walls). It gives you a much better picture of the real impact of each individual post. Now you can compare impressions with the number of interactions each post gets. 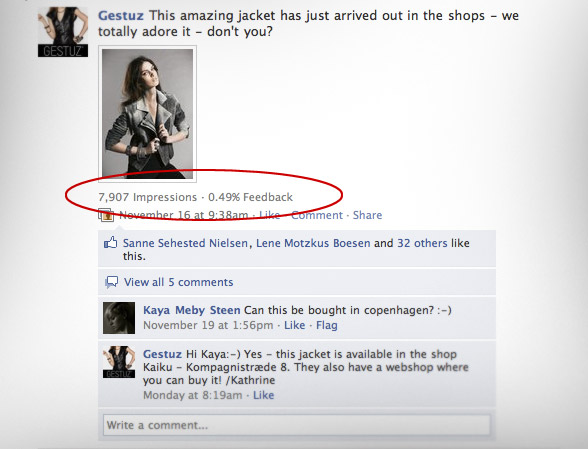 Note: Gestuz is a client, so go ahead and like them. They don't mind :)

The important thing about this is "social analytics". It is a way for you to better understand your customers.

You use these numbers to divide your posts up into groups of what works and what doesn't. You identify what types of post generate many impressions, and which that don't. What types of post get a lot of feedback, which don't. Are there posts with low amount of impression, but very high feedback?

And then, you ask yourself, why does this happen? Compare it to other posts to see whether you can find any similarities. Is there an overall trend?

Below you can see two posts - one very popular, one average. Post analytics tells you a lot about your customers, the popularity of your products, and your market generally.

One example of how you can use this, is if you where to create a Foursquare (or Facebook Places) campaign, then the product on the left would be a better fit for your promotion.

This is also why you should use social as a way to preview your upcoming products. The feedback and reactions can really help you make smarter decisions down the road.

A few facts though:

What we need is to know the number of real people who see each post, and measure that against unique interactions. A 0.2% feedback rate for a post with 9,000 impressions. doesn't really tell you much. You don't know whether it is based on 3,000 people watching a post three times or 4,500 people seeing the post twice.

The other good news, however, is that the "Monthly Active Users" (or MAU) will now include users seeing your post from all parts of Facebook (previously MAU was based on people who actively engaged, not just read a post).

This will again give you a much better picture of your actual traffic on Facebook, although it will also make it harder to tell what the number of unique interactions are (we only have total interactions).

Overall, these changes help you get a better picture of your audience. Facebook still needs to give us real analytics. They need to measure real people as opposed to just views, clicks, and impressions. It doesn't matter how much traffic you got, if you don't know how many real people who are behind the numbers.

I would also recommend that you do what Mari Smith told me she does. Track the activity by hand. I do the same (although not on a daily basis). It does take more time, but you also get a more precise picture of your posts and your audience.

Also, go into Facebook Insight, export your data to Excel (or another spreadsheet program), and work the numbers. Start comparing e.g. increases in likes per day, with total interactions per day. Identify what period of time that made a difference, and go back into your stream to see which posts that was about.

Social analytics aren't perfect, but you can learn a lot about your customers.