Why would you give up everything you believe in for the short term gain of earning a little bit of extra money? Why would you put your business on a path where everyone is doing the same low-quality pageview-optimized link-bait content.

When Google launched 'Google Consumer Surveys for Publishers' I was pretty sure it was some kind of April fools joke. And even it wasn't, publishers would surely not buy into it. So, I ignored it.

But it wasn't a joke. Many publishers are seriously considering Google Surveys, and some are even using it. On top of that, several of my readers have been sending me links to it, and asking me to write an article - so, I couldn't ignore it any longer.

Is Google Surveys a good idea? Are you kidding me? It's crap ...and here is why:

If you don't know what Google Consumer Surveys is, here is the short version. 'Google Consumer Surveys for publisher' earn money from content, by having people answer a question before they can read the article. The questions themselves are asked by brands, who wants to know all kinds of strange things. The brand pays 10 cents per question answered, and the publishers then get a cut, with Google taking an 'administration fee'.

On the surface, it looks interesting. People can read premium content without all the hassle of a paywall, or actually paying the publisher any money. Instead, they 'pay' by answering a question. Brands, eager to do focus groups in a cheaper way, can crowdsource their questions and get a ton of answers in return, for almost no money at all.

Everyone is happy ...except of course, the people, the brands and the publishers.

So what's wrong with it?

Let's start with the 'Culture of Free'. The number one thing that is decimating the publishing industry today is the continual motion to convince people that content is not worth paying for.

We have proven that this 'idea' of free content in exchange for non-monetary actions is not a workable solution. We learned it during the first dot.com bubble. We have learned it with advertising, where print dollars amounts to digital pennies, and we are learning it with every other form of 'free' that is out there.

Free is not a sustainable business model. Just look at the media industry. Free does not work, so stop trying to find new ways to do it. You are not helping, you are making it worse.

The problem with free content is that the only way to make it work, is to lower the value to a level low enough that the article no longer worth reading. How many times do publishers have to shoot themselves in the foot, before they realize this.

See: The Page View Conundrum and The Traffic Whores.

If you try to optimize free content monetized by 3rd party revenue, like advertising or surveys, you are in the business of optimizing page views. This is the only tool available to you, when you are paid based on volume and not quality. Which means that you are on a direct path to becoming another Demand Media type of business.

Why would you do that? Why would you give up everything you believe in for the short term gain of earning a little bit of extra money? Why would you put your business on a path where everyone is doing the same low-quality pageview-optimized link-bait content.

What about the brands using it? Isn't Google Consumer Surveys useful for them? Isn't this valuable?

No. Not even close.

First is the problem of the questions themselves. You can only ask one question but, as we all know, that is not useful in any way. To get a useful answer, you need to ask at least two questions. The first being, "What do you like the most? A or B?". The second being, "Why?"

Here is an example that Google highlights in their description. A brand asks if people would be more willing to buy a product if one of two stickers where applied to it. And the brands will then get a ton of answer back, telling that one of stickers was better than the other. 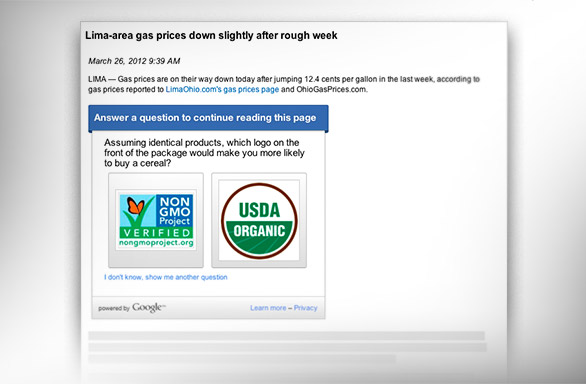 What they lack is 'why'. Why is one sticker better than the other? They have no idea, and as such the brands don't learn anything new. It's doing business blindfolded. If you don't know why something works, how could you possibly succeed in the future? How could you be the brand that people wants to follow?

It's just stupid! You would be far better off doing a real analysis, even though it would also be much more expensive. You need to learn why, otherwise you have a correlation but no causation.

Another thing. What is the absolute number one thing that people hate online? In 1999, it was splash pages. Pages that would get in the way of the actual content that people tried to see. In 2005, it was ads that took over the page, and had to be dismissed before people could read the article. What do you think it will be in 2013? Yes, you guess it. Annoying surveys that constantly get in your way every time you click on a link.

Haven't we learned anything? The worst thing you can do online is to get in people's way by interrupting them with irrelevant distractions.

And what do people do when they are being constantly annoyed online? They find a way around it, with ad-blockers, extensions, etc.

If they cannot find a way around it, people fill it with crap, just to counter the annoyance.

One example of this is what we experience on every single gaming site. When you go to a site about games, you are usually presented with a box asking you to confirm your age.

How many times have you answered this correctly? Sure, you might have entered your correct birth date the first time you ever encountered this question, but the second, third, fourth and fifth time you would just entered some bogus date to get in. Some even go a step further and deliberately enter a wrong date, just to mess up the data.

It will be the same with Google Surveys. The first time you see a question, you might answer it correctly in relation to what you really feel. But then when you are being asked again, and again, and again, people will either answer wrongly on purpose, or just answer randomly without actually reading the question first.

The brands will get a ton of result that they cannot use. Worse, the answer might actually tell them the exact opposite of what they need to know. But as a brand, you have no idea if the answer are what people really feel, the exact opposite of what people feel, or just some random answer by people who don't care - or a mix. You don't know how inaccurate it is, and as such you cannot use it.

Google Surveys is just terrible. It annoys your most important asset (your readers), it misleads your partners (the brands), and it forces you as a publisher to focus on volume over quality, which reduces the overall value and lower how much people trust your content.

The only one who wins is Google, who will earn a ton of money watching clueless publishers and brands shoot themselves in the foot.

I love Google. I think it is one of the most respectable and brilliant companies on the planet. Google+ is my new favorite place to be. But Google Surveys is not a good example of what Google's core values are all about.

If you want to make money from content online, you need to do two things:

The reader must never be in doubt that the content they are reading is worth something, and has to be paid for. If people get the idea that something is free, then you have failed.

People who answer a question don't think of it as payment. They think of it as an annoying obstacle put in front of them by selfish brands who don't care about their time. None of the people who answer these questions will later turn into paying subscribers, because you created the wrong relationship to begin with.

Valuable content is made for the convenience of the reader. It has to be worth paying for, and it has to make life better, simpler, and more convenient when you buy a subscription.

Google Consumer Surveys is not helping...

The market for podcasts is growing, but we still haven't found a good way to do premium podcasts

The difference between advertising and charity ... and supporting the news

taxing advertising will not give publishers more money.

A look at The Correspondent's Crowdfunding Campaign

A deep dive into the data behind The Correspondent's crowdfunding campaign.

The Path to Lifetime Value for Publishers

Getting people to pay for content has very little to do with the price and much more about how you get to the point.

monetization:
Why do Norwegian newspapers perform so much better than the industry average?

monetization:
What will happen to publishers after COVID-19?

monetization:
Read the room. Why publishers' call to advertisers is misguided