The Amazing Google And The Not So Amazing Ads

Google is out with its Q4 financial results, and not surprisingly, they look awesome. In fact, they are so good that Google/Alphabet is now almost as valuable than Apple (it did exceed them for one brief moment in aftermarket trading). Although that's not really that amazing when you think about it. Apple makes a few highly profitable products, but Google has seven product lines with over one billion monthly active users.

These seven are Google Search, Android, YouTube, Google Play, Chrome, Maps, and Gmail. They all have 1 billion+ MAUs.

From that perspective, it's kind of surprising that Google hasn't exceeded Apple's share price. It has long been a far more dominating factor in the market than Apple has ever been. But there is one part of Google's financials that we need to pay special attention to as publishers and brands, and that's how things are going with advertising.

We all know that Google is almost entirely monetized by ads, and overall things are going pretty great. Paid clicks on Google's own sites were up by 40%, which is amazing. However, their network ads (aka AdSense which is used by publishers and bloggers) were only up 2%.

This should not come as a surprise to you, as we have seen this trend for a long time. The reason is likely due to a combination of several things. Google Search ads will always outperform AdSense ads simply because they are all based on a specific intent. There is a huge difference between seeing an ad for something you are looking for, and seeing a random ad when you are just browsing the internet.

But the other reason is also due to the formats. The ads that appear on Google's own site are all designed to fit into the experience of where they are displayed, while AdSense advertising is almost entirely based on poorly performing display advertising.

This trend is not unique to Google. The display advertising format (aka banner ads) is in trouble everywhere.

But Google's own advertising isn't out of the woods either. When we instead look at the value of each ad click (aka how much revenue each individual ad generates), we see another very familiar trend.

Overall, the value per ad is down 16% on Google's own sites and 8% with Adsense (display advertising). That's scary.

For Google this is not really an immediate concern because they are focusing on scale. And as we all know, as long as they can keep scaling and brands keep moving more and more of their budgets to digital, Google will still win.

For instance, compare the transformation from print to digital from 2010 to 2015. Here is what it looked like in 2010: 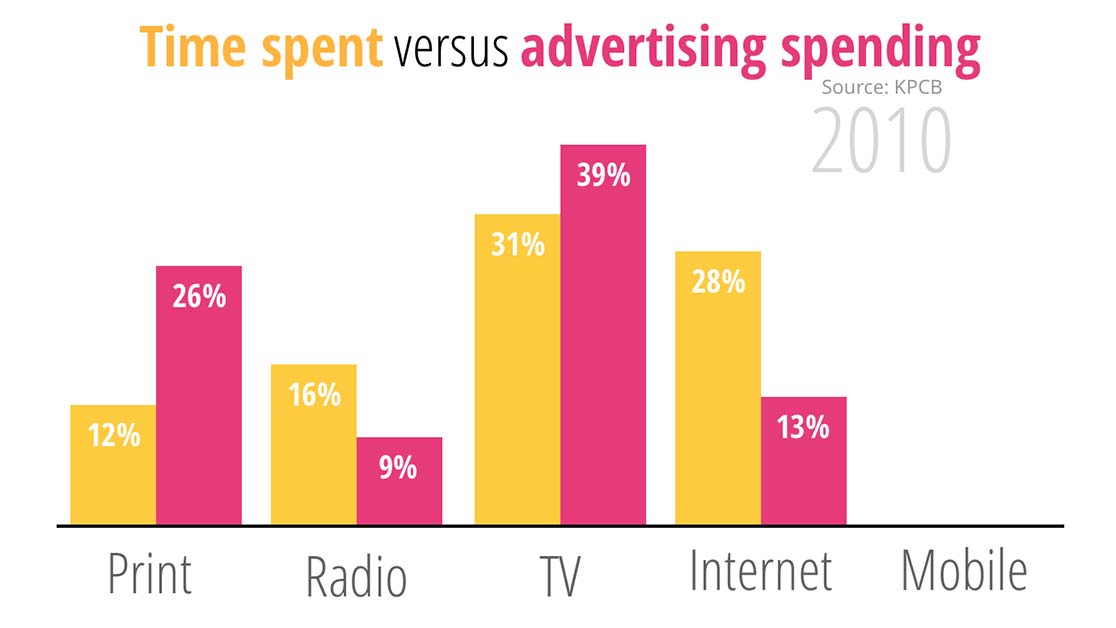 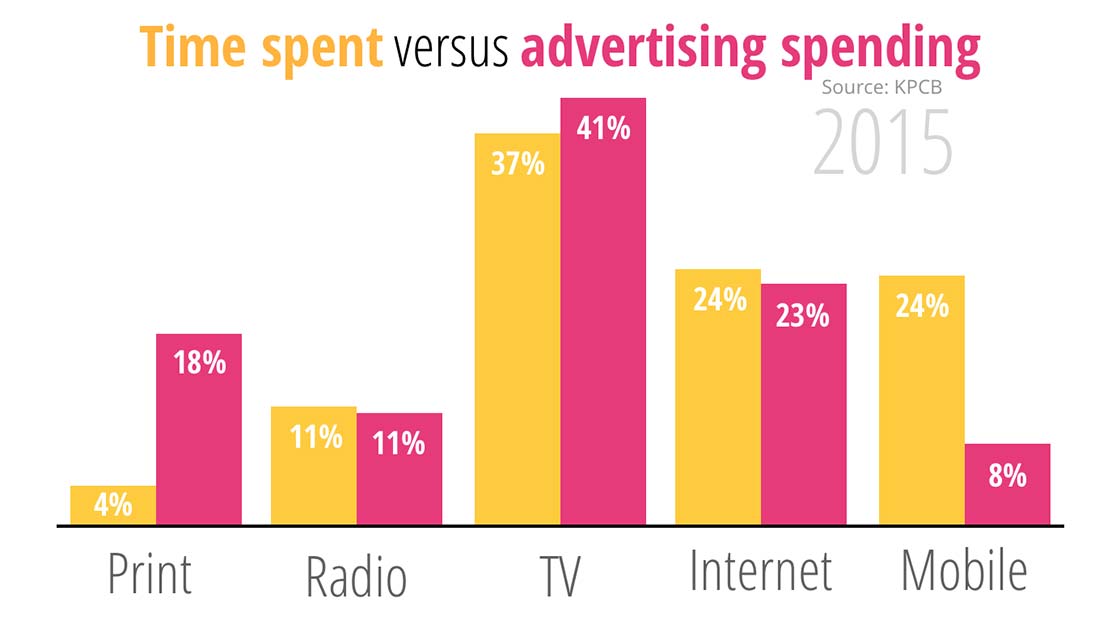 Notice how print is dropping fast, and how digital is growing. Now project this graph 5 more years into the future, and it's pretty clear where things are going.

Google (and Facebook) wins because it is the new default destination for all that new digital advertising revenue, while old media is losing. And while this trend is happening, Google is in a very good position even though the value of each ad is dropping.

The only question is whether Google will be able to transform themselves and create new ad products over the next 10 years, so that when this trend ends in 2025 (when print advertising spending reaches zero), they will still maintain some level of growth.

I'm sure quite a lot of people at Google are working on this.

However, the drop in value per ad click also very clearly illustrates the trouble the advertising market is in overall. The value of each individual ad is dropping and has been dropping for many years. And there is no sign that this will change or recover in the future.

Think about what this means for publishers (and bloggers). The reason why AdSense grew by 2% is likely due to the network getting bigger, as in more sites using it. But that's not a good sign for the individual sites. And with an 8% drop in revenue per ad, things look problematic.

This is great, but doesn't change the trend.

We know that print advertising will move, and is moving, to digital. So publishers naturally earn more from digital. If they didn't, something would be terribly wrong.

But publishers too are seeing declining ad rates per ad view, and we constantly hear about publishers lowering their prices to keep up the volume of sales.

When we look at this from a trend perspective, the outcome is pretty clear. Publishers will see a drop in ad income overall, only offset slightly by some of that revenue shifting from print to digital formats.

But once print dries up (within the next five to ten years), the publishers will be left with less than they have now, and a market that is still declining. And look at how fast it is happening. The value of display advertising from Google Adsense declined 8% per ad in 2015 alone.

Unless you can keep increasing your ad inventory as a faster rate, as Google is doing, you will decline with it. As I said before, there is no trend in the market that this would turn around with the current ad model.

Also think about this from the perspective of brands. As a brand, you don't want to be just one of the million other ads in an ever-expanding ad inventory, because this means that more and more ads are competing for the same people's limited attention.

What you really want is exclusivity or, at least, an exclusive micro-moment where people only focus on you. You can't do that with display advertising, because it's designed for scale rather than intimacy.

The declining value per ad is as bad for the brand doing the advertising as it is for the publishers offering the inventory. This is not a good trend!

So, what is the solution, you ask?

Well... as a concept, it's simple. You need to reinvent the ad model so that you break out of the abundance. This is why we see more and more brands sponsoring people on Instagram, for instance.

When you do that, you are no longer just one of the many ads that people see. Now your brand is specifically promoted, selected and endorsed by a person people care about . Your ad is based on distinction instead of abundance.

As publishers we need to design for this as well. Instead of advertising as just something we add to our publication (which just creates more abundance), we need to think about how we can turn ad products into publishing itself.

To win this future, you need to get out of the rat race of just increasing the inventory, and start rethinking what advertising can be. We need to turn advertising into something that people choose to spend time with, instead of being this annoying 300x250 pixel box with blinking text.

Remember, the future of advertising as a whole isn't the problem here. Brands haven't stopped spending their marketing budgets on ads, nor will they (overall ad budgets are actually growing). The problem is with what is happening on the individual ad level, which is driving down future revenue projections for each individual publisher.

That's the problem you need to solve. 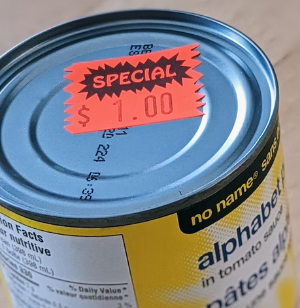 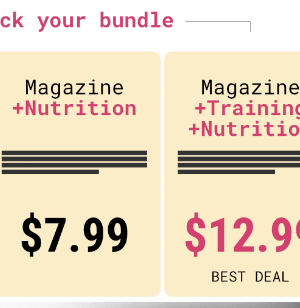