Welcome to another edition of the newsletter. Many interesting things have happened recently, things we need to talk about.

The biggest news last week was from the UK, where the ICO has announced that newspapers also have to live up to the new tougher demands for not tracking children.

This should not come as a surprise to you, because it's all part of the larger trend around privacy, and the short story is this:

Over the past several years, there have been many debates around tracking children online, and different countries have implemented their own set of rules.

In the US, these rules are defined around COPPA (Children's Online Privacy Protection Act), which prohibits companies (any company) from personally tracking kids online.

As you most likely know, YouTube recently got hit hard by this, forcing them to dramatically redefine how they categorize their content, limiting their advertising, and forcing creators to comply.

However, when all of this was happening, several media analysts (including myself) pointed out that these rules don't just apply to YouTube. They apply to any website that kids might visit, including newspapers.

Almost a year ago I wrote this:

This [COPPA] is not unique to YouTube. If someone under 13 visits a newspaper, don't they also show ads, and aren't those ads then also targeted?

You see the problem now?

If we define COPPA as kids should never have their person targeted with advertising, then surely it applies to all of us. So, as a publisher, what have you done to prevent targeting when a kid reads one of your articles?

In other words, if a kid visits a newspaper, what are they doing to prevent ads and targeting from being displayed?

And last week, in the UK, this reality hit home.

And these rules force publishers to either completely stop tracking, or to add age verification to their websites, as the Press Gazette reports. 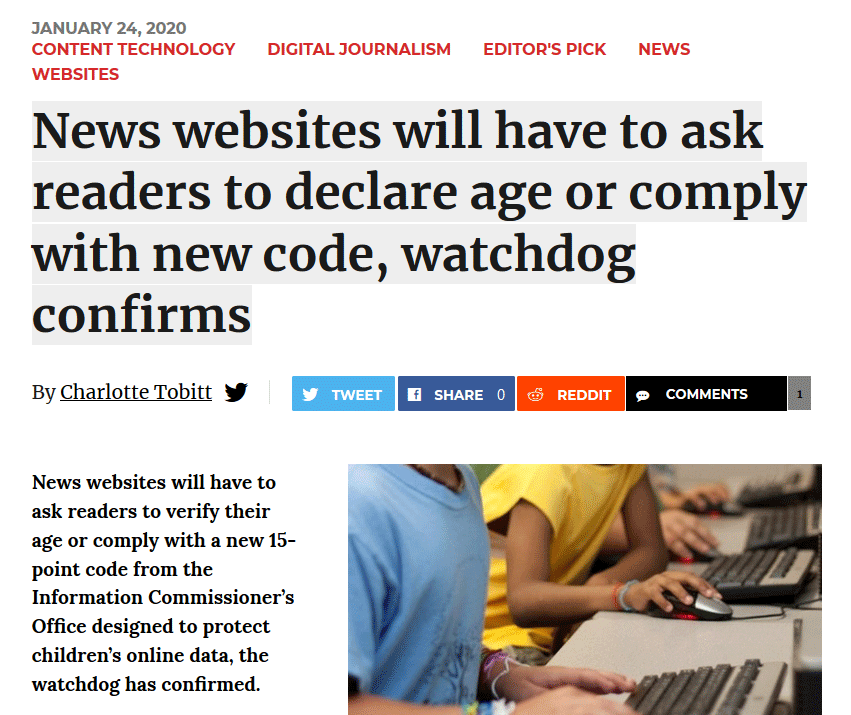 Applying the code as standard will mean websites putting privacy settings to high and turning off default data profiling, which would impact behavioural advertising.

If organisations (including newspapers) do not want to apply the code as standard, however, they will be forced to bring in a form of age verification.

As I said, you shouldn't be surprised by this. We have seen this coming a mile away, and it's part of how the rules around privacy are changing. This is just a natural consequence of GDPR, CCPA, COPPA, and now the new UK regulations.

And from a trend perspective, we are going to see the same thing happening in many other countries.

However, the publishing industry has started to sound like the tobacco industry. We know that tracking children online is bad. Your own journalists write about it, but publishers still argue that we should be allowed to keep doing it anyway.

Ian Murray, from the Society of Editors said this:

A complete exemption from this code for the media would have been more appropriate, especially given that there is a great deal of encouragement for young people, including those under 18, to engage with the news.

This legislation has been created to stop children from being tracked by ad tech companies, and we are now saying that, because we are publishers, we should be exempt from this, and be allowed to send personal tracking data about kids, so that ad tech companies can build up profiles about them.

How can we even say that? This is the kind of lobbyism that the tobacco industry is doing.

More than that, everyone is against us. The public doesn't want us to send tracking data for kids to hundreds of third-party tracking companies. The parents certainly don't want it. The legislators don't want it.

More than that, we in the media industry don't want to do it either. We have spent years complaining about how broken the ad tech industry is. And our own journalists write new stories every week about how bad it is.

Just a few days ago, the Guardian published this article: "Watchdog cracks down on tech firms that fail to protect children" ... talking about this exact legislation and its impact on the tech companies.

In an age when children learn how to use an iPad before they ride a bike, it is right that organisations designing and developing online services do so with the best interests of children in mind. Children's privacy must not be traded in the chase for profit.

This transformative code will force high-risk social networks to finally take online harm seriously and they will suffer tough consequences if they fail to do so.

They published this on January 22.

But then someone looked at this legislation and realized that it applies to all websites (as it should), and suddenly publishers realized that this also applied to them.

And now publishers are saying:

OMG ... this is bad. We might lose money because of this, and we rely on third-party tracking. So we should be exempt from it, and be able to track kids, especially since kids want to read the news!

I'm sorry, what kind of nonsense is that?

But most importantly, look at the trend. Right now, publishers are not just falling behind, we are positioning ourselves as the bad guys.

This is like if we started saying that newspapers should be exempt from climate change regulations. So while everyone else has to reduce their carbon emissions, we as publishers should just be allowed to pollute as much as ever ... because we publish news.

It's the same with privacy. We cannot say that everyone except publishers should protect children online!

As publishers, we have just as much responsibility as anyone to be a part of the solution. More so, in our role as the press, and how we are at the forefront of public perception, we should be the ones leading this change.

We should use our journalism to lead this change, and to show the public how to create a better world.

We should lead by example.

What we need to do is to create a new world of advertising, one where no personal data is shared with any third-party. This, for instance, is what Google is trying to do with its new "no third-party cookie plans", where they want to create a privacy sandbox directly within people's browsers.

This way, advertisers still get the targeting data to define what ads to show, but they get no personal data of any kind, and third-party ad companies can't build up personal profiles about people.

I have many concerns about Google's specific model (which is a topic for another article), but this is the kind of thing publishers should have done themselves.

This change is happening now. This trend is coming no matter how much you complain about it. Be a part of this trend, rather than arguing for exemption.

As you may have heard, Bloomberg has launched a new site focusing entirely on climate change. It's called Bloomberg Green, and I absolutely love it.

One thing that I particularly like is the Data Dash on the front page, giving you a live updated view of where we are right now.

The reason I love it is because it creates a level of focus and a sense of urgency. It centers around a shared goal. Everyone from the readers, the journalists, to their partners will see this ... and instantly they will 'get it'.

This is what we want to change!

I also love it because of how it ties into the world of editorial analytics. I wrote about this all the way back in 2017, in "How Editorial Analytics can Help you Define your Editorial Strategy".

Editorial analytics means that you define your focus around an editorial goal, and then you track that as your metric for whether you are achieving what you set out to do.

This data dash is exactly that. It's an editorial metric, displayed to everyone in real time.

This is the kind of thing I want other publishers to do. Define your editorial focus, define what the problem is, quantify it, measure it, and then track that as a metric for all to see.

This is such an incredible tool to get everyone to instantly feel part of the journalistic focus.

Finally, I just want to give a shout out to my friends over at the Media Voices Podcast. They have produced a wonderful episode about freelance journalism.

It's well worth listening to.