The latest episode of the Baekdal Plus podcast is out, and this time I talk about evergreen content.

Evergreen content is something that stays relevant forever (or at least for a long time), both in the way that it can continue to bring in traffic every day, but also (if you make it right) so that it can be used more than once.

This is nothing new, and if you look at digital natives like YouTubers and bloggers, focusing on producing evergreen content is a key element of their editorial focus.

What is weird is that this doesn't apply to traditional companies. Over the past decade, we have forgotten what evergreen content is. Instead, most traditional newspapers and magazines just produce what is essentially throw away news ... and we are paying a very high cost for that.

It's time to rethink this.

So, take a listen to the latest podcast, or just read it as an article(it's a hybrid article/podcast, so you can decide which format you like the most).

Mother Jones is the latest publication to have revealed their Facebook numbers, and it doesn't look good. From its peak in 2016-2017, they are now down to the same numbers they had in 2014 (as seen in the picture below). 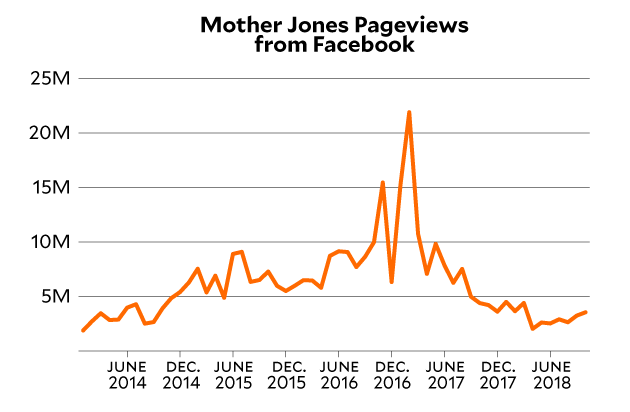 This is not surprising, and we have seen similar numbers from many other publications. However, I do have one thing to add here.

When I look at the graph above, I can't help but think that all this traffic was 'artificial' in the first place. That incredible boost in traffic that many publishers had in 2016-2017 was never really 'earned' to begin with.

For one thing there was the Trump bump, which created a ton of traffic that under any other circumstances wouldn't have happened. If the US Presidential election had instead been between Jeb Bush and Hillary Clinton, people would have been so bored with the daily coverage.

Secondly, Facebook also artificially boosted news content in the newsfeed in the hope of making Facebook more about news (which, of course, didn't work out that well for them). But this also means that so much of the boost that publishers saw in 2016-2017 from Facebook wasn't real traffic. It was boosted traffic that we got 'for free' but hadn't actually earned.

So, when I look at this graph, I see it as a way for the market to adjust itself back to where it should have been all along, and I look at the past five years of Facebook traffic as basically everyone living a lie.

In other words, for a magazine like Mother Jones, getting 4 million visits from Facebook per month is probably the right amount for a magazine of that size and within that market.

Of course, I still don't think Facebook is giving people the right amount of traffic. Facebook newsfeed algorithms are so heavily editing people's streams to only optimize for what Facebook wants (like how they are boosting videos, or low-intent friend posts) that none of the traffic we see from Facebook can be considered 'earned'.

But, as a media analyst, I kind of like what I'm seeing, because the past five years of publishers focus on 'optimizing for Facebook' had very little to do with real traffic and a real audience. It was all about publishers milking Facebook for as many views as they could.

Now that this doesn't work anymore, we can finally get back to the real work of creating real publications and real content.

Facebook will not go away, and, as a marketing channel where you are promoting specific stories for specific reasons, it can be quite useful. But it's not a publishing channel.

Your publishing channel is where you engage with your earned audience.

The closing of Mic is not 'the end of digital'

Over the past several weeks, I have seen many people talk about the closing of the millennial focused publisher Mic as the meltdown of digital media.

Everyone I am talking to has consensus on this: bottom is falling out of consumer digital media, and it is really really bad out there for venture backed (or even indie) online media cos. It seems to be coming apart faster than I've ever seen in my two decades of covering this.

And over at Columbia Journalism Review, they wrote (as part of their podcast):

Where do we even start in a conversation about the digital media meltdown?

I have also seen and heard plenty of examples recently about both good and bad media startups that didn't make it.

So do we have a digital meltdown?

What we are seeing, however, is a meltdown of traditionally focused media pretending to be digital and in venture capital backed media startups.

But that's not digital. That's only a very small part of digital.

Take something like Mic. They were talked about as the new age of media for millennials, but they weren't. They were a very traditionally focused media company, pretending to be digital by optimizing for the low intent traffic of Facebook, by posting content that was basically just optimized for outrage.

I tweeted about this when I wrote:

The traditional media model: Create one mostly unfocused product, for a very large group of random people, and optimize for metrics that reduce the audience to a 'view'.

This is what Mic did and this is what every other traditional company does. Real digital isn't about this.

It's the same with VC backed media startups. The problem here is that all the investors are hoping 'they will turn into the next Facebook', so they start out their businesses with the goal of attracting millions of people at some kind of exponential rate. But that's not how this works. The only way you can achieve that is to basically create the wrong type of media.

So again, the reason these things fail is because they were invested in for the wrong reasons.

But if you look outside of this world, the rest of our media is doing just fine. Every day we see amazing examples of digital natives creating new media companies that are quite successful. The difference is that they don't look like old media companies creating random news for random people (on Facebook), nor are they the next platform for news.

They are just digital natives doing their thing in a way that works.

I plan to write a lot more about this in 2019. I have currently scheduled this to be a topic in the first part of February (In January, I plan to write about 'the trends of 2019 to focus on' and the 'circle of influence'), so stay tuned for that.

But for now, you shouldn't think that Mic represented digital media in any way. The real world of digital is doing just fine.