How Norwegian newspapers can convince 42% of the public to pay, and what is journalism?

We are coming to the end of 2020, and what a crazy year it has been. Here in my country (Denmark), we are ending the year in total lockdown. But, I have secured myself a substantial supply of Christmas cookies.

2021, of course, will be the year where we talk about returning to normal, although for many publishers, this 'normal' will not necessarily look like the old normal. But, I have an article coming in January just about that.

For this final newsletter of 2020 (unless I get bored and write another between Christmas and New Year), I have two very exciting topics to share with you.

The first topic is about how the Norwegian newspapers are able to convince so many people to pay for news. And the second topic is how we think about the role of journalism.

That's a crazy low number considering how much people use the internet for everything else. Take a country like the UK. Here 87% of the public made an online purchase in 2020, and yet, only 7% of the public is paying for online news.

So, it's not like the public doesn't know how to use the internet. They do. But in the news industry, we are just really bad at selling our journalism.

However, there is one country that stands out from the rest. That country is Norway, where a staggering 42% of the public says that they are now paying for online news. 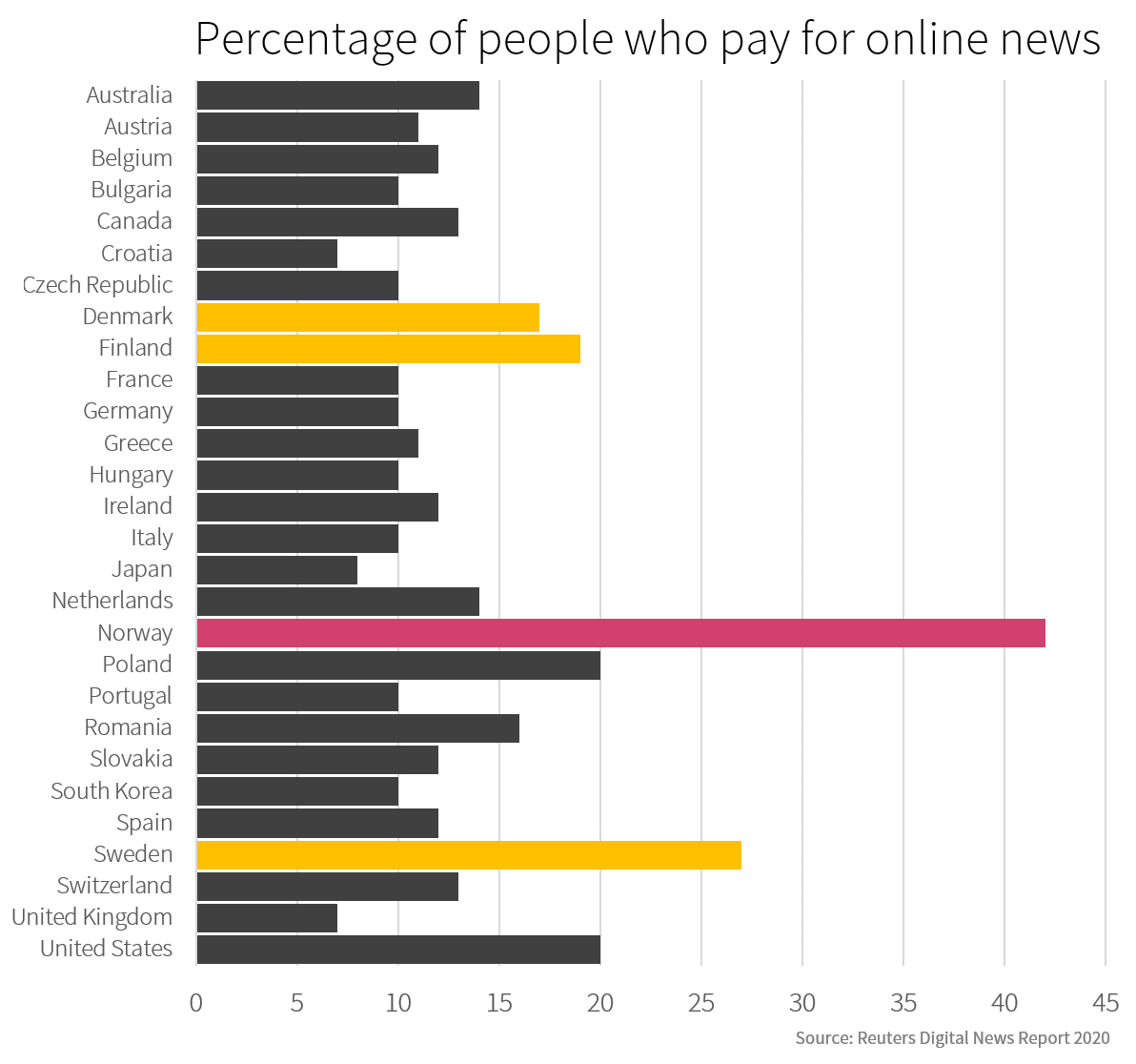 This is astonishing, and over the years, I have very often been asked why this is. The answer is that it's complicated ... or rather, it's a combination of many different factors. Some of them are about Norwegian society and culture, some are about the editorial focus, and their technical implementations.

So, in my latest Plus report, I take you through all these different elements to help you better understand how they are able to do this.

Take a look at: Why do Norwegian newspapers perform so much better than the industry average?

What does journalism actually mean?

In my article looking back at the past 10 years of Baekdal Plus, I talked about what the next big focus will be for the next decade, and I said it's all about how you define journalism.

Obviously, I'm going to write much more in-depth articles about this in the future, but I want to give you a short trend summary of why this is so important.

And let me start by asking you a question. What is journalism? Well, let's think about it in terms of layers.

At the most basic layer, we have reporting.

We send journalists to places where something is happening, like a courtroom, a press conference, a crime scene, a fire, and so forth, and then they observe what is happening, write that down into an article, and publish it in the newspaper.

I personally call this type of media 'postal-service journalism'. I call it this because, as a newspaper, you are simply conveying information from A (the scene of the incident) to B (the public), but you do not change, reflect, fact-check, analyze, or in any other way interfere. You are just neutrally reporting what is happening.

But more importantly, this is something anyone can do. You don't need any real skills to go to a press conference, write down some notes about what people said and what was presented, and then type that up into an article.

However, think about how much the world has changed.

In the early 1900s, newspapers had a special role in society in that they were the only ones capable of distributing news. Creating a newspaper was expensive. You had to print it in a big warehouse full of expensive machines, and then you needed a vast distribution network to make it available to the public.

So think about a story like the loss of the Titanic. Journalistically, it's a very low-end story. Anyone who heard about this could write an article about it. You don't need to be a great journalist to report this, but only the newspapers could distribute this news. 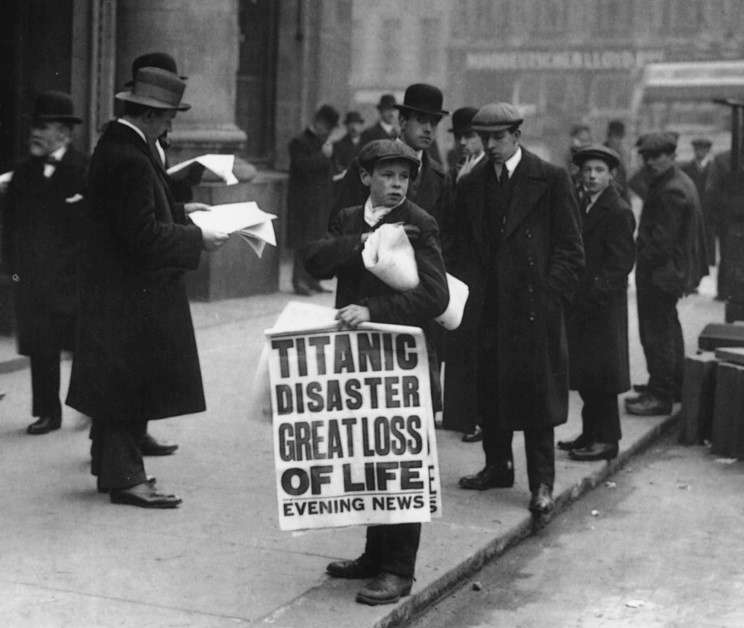 We had 100% value in our distribution!

So, now fast forward to 2020-2030. Today we live in an entirely different world. If something is happening, we instantly hear about it from multiple sources. Think about the Notre-Dame Fire.

In the early days of this fire, we obviously wrote tons of articles about it, and many of them included things like, "Hey look, Obama just tweeted about this": 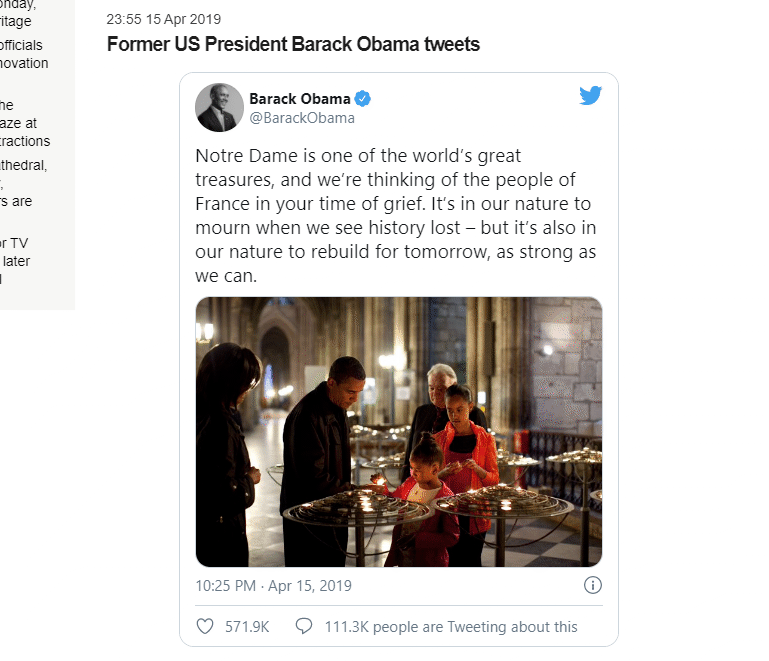 But think about this journalistically. Again, the journalistic value is close to zero because literally anyone could embed a tweet and post that Obama just posted something. There is no journalistic skill required.

Secondly, we are reporting that Obama posted something directly, which 111,300 people have already retweeted. So that means that our role as 'distributors' is also zero.

Just think about this. In 1912, we provided an invaluable service to the public in telling people something they could only hear about via the press. In 2019, we were merely doing what 111,300 other people were also doing.

There is actually an even better example happening in Denmark at the moment. During this pandemic, our Danish Prime Minister has been using Facebook and other social channels to communicate directly with the public. And the Danish media is completely up in arms about this because they want her to exclusively communicate via the press.

I wrote about why this is the wrong way to think about this on Twitter the other day, but think about the value of the press here.

When politicians hold a press conference, they are essentially giving the press exclusive distribution, but when they announce something on Facebook, anyone can write about it.

So, suddenly, even though journalism reports the news exactly the same way (by telling the public what the Prime Minister said), we have no value.

This is the new reality. Our value as the press has dramatically diminished. We have now reached a point where distribution is essentially free and where everyone can, and is, doing it.

The result is that our 'just reporting what someone said' has almost no value anymore.

This dramatically changes the role of the press. We are no longer in the business of 'bringing people the news', instead, we need to find another way to create value.

So what way is that? Well, it's obvious. If the value of distribution is close to zero, we need to dramatically raise the value of our journalism.

And this is where the layers come in. Think about journalism as a number of layers, each one bringing more and more value.

At the lowest end, we have "just reporting", but from there the value goes up. We have

Most newspapers are already doing all of these things to some extent. But, when we look at the press today, so much of the focus is at the lower value journalism, rather than on the higher end.

And this is what will change over the next decade. Newspapers who just spend their time on what happens at press conferences or what politicians wrote on Facebook are not going to be successful in 2030.

Instead, in ten years time, we will see a shift towards a different type of news that isn't about 'bringing the news', but more about 'explaining and creating the news'.

It's going to happen very slowly, but this is a change and a trend that has already started. And more so, this shift will have just as big an impact on publishers as the shift from print to digital.

So think about the next decade and where you want to be in 2030.