Welcome back to the Baekdal Plus newsletter. Today, I have three interesting stories for you, including the potential to create cheaper newspapers, let's talk about the attention imbalance and an update on Revue.

This is just a wonderful question, but it's also a very complicated one. Not only are there so many elements to consider, (what do we put in it? How do we structure it?) but also, there are so many differences between countries, the answer is going to be different depending on where you are in the world.

So, in my latest Plus report, I take a deep dive into this question, and try to talk about all these elements from the perspective of four different countries: Norway, the UK, the US, and the Netherlands.

So take a look at: "How to design a cheaper news product?"

As many of you know, I have been analyzing the problem with news fatigue and its effect on us, the press, and the industry since 2019 (well, the first time I wrote about it was actually 10 years ago), and the more I look at this, the more I see how damaging this is for the media industry.

I have written about these elements several times, most recently I talked about the effect of this in terms of getting people to subscribe, in "Addressing news avoidance will help every other element of publishing", and also how it plays a role in the overall conversion and churn paths, in "A conversion that (never) ends. Mapping publisher funnels".

However, I want to focus more on the news fatigue itself. What causes people to feel like they are just exhausted by the press? What is the main element that drives that?

The answer is something that I'm now going to call the "attention imbalance".

The attention imbalance is when a single individual or a specific topic starts to massively dominate your time and space at a rate that is completely disproportionate to what you need (or want).

Let me give you a simple example of this.

Ever since Elon Musk took over Twitter, he has been absolutely everywhere but I wanted to figure out how bad it was. So, before writing this newsletter, I decided to simply count the number of times I came across something about him in a 24 hour period.

What I mean is that, during the day before writing this newsletter, on 28 separate occasions (so not during a single visit), I saw something Musk had done. This was not just on Twitter, it was also every time I went to a newspaper, in several of the newsletters I subscribe to, when I just wanted to see what my mother had posted on Instagram... It even happened when I was on the phone with a friend, who then started talking about him.

Twenty eight times during a 24 hour period (which is more like a 16 hour period because I also spent some time sleeping).

Think about how insane that is. There is absolutely no reason that I (or anyone else) need to know what a single person has done 28 times in a single day, across all channels possible.

This is the problem we have today. We are filling people's lives with events and personalities that quite simply should not get that level of attention, nor should they be able to fill so much of your awareness. I mean, we shouldn't even have to see what he is doing every day. That would amount to 365 times per year. No person needs that.

But, the problem is that this is not unique to Musk. When I analyze the news, there are a lot of topics and personalities that we push into people's awareness at a massively disproportionate rate.

We also see this clearly in the many studies about news fatigue. Here we see that 43% of those avoiding the news are doing so because they feel there is an attention imbalance. Now, when Reuters Institute did this study, we were still very focused on COVID, but we saw the same with Brexit, with Trump, and indeed with every topic. 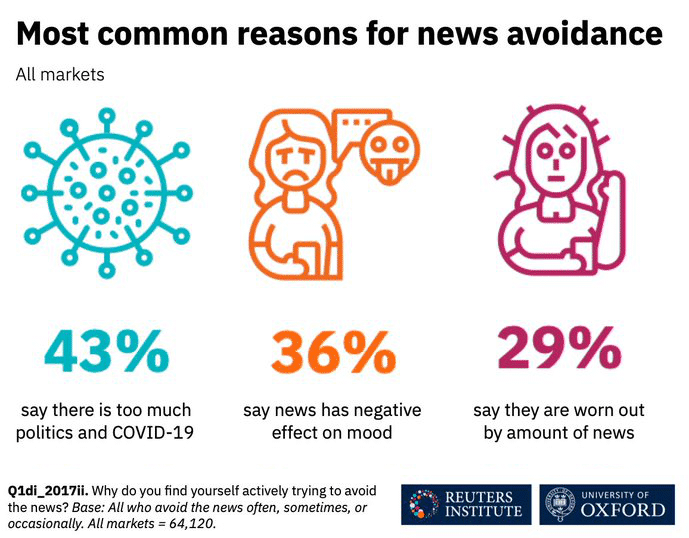 This is a problem. We are undermining our relationship with our audiences simply because we overwhelm them with people and topics at a rate not valuable to them.

Imagine if you had an assistant, and you told him/her that you wanted to be kept up-to-date about something, and then in their eagerness to please, they started sending you updates every 10 minutes.

How long would it take before you had had enough? How long would you endure this before telling them to shut up out of frustration of having this one topic suddenly dominate your day?

This is what news online has become. It's like an assistant who doesn't know how to moderate and organize things.

When I look at the data, the studies, and when I analyze the news, this attention imbalance is one of the key problems we face today. And it's not just about being better at editing and moderating our focus on single topics/individuals, it's also about finding other topics that would be valuable for people to learn about.

Fundamentally, we need this to be a far bigger part of our editorial strategies. How do we balance our coverage so that it keeps the public informed, but is not massively overexposing people to such an extent that news becomes an annoying form of noise?

Again, I talked more about factors like this in my article about subscription conversions. 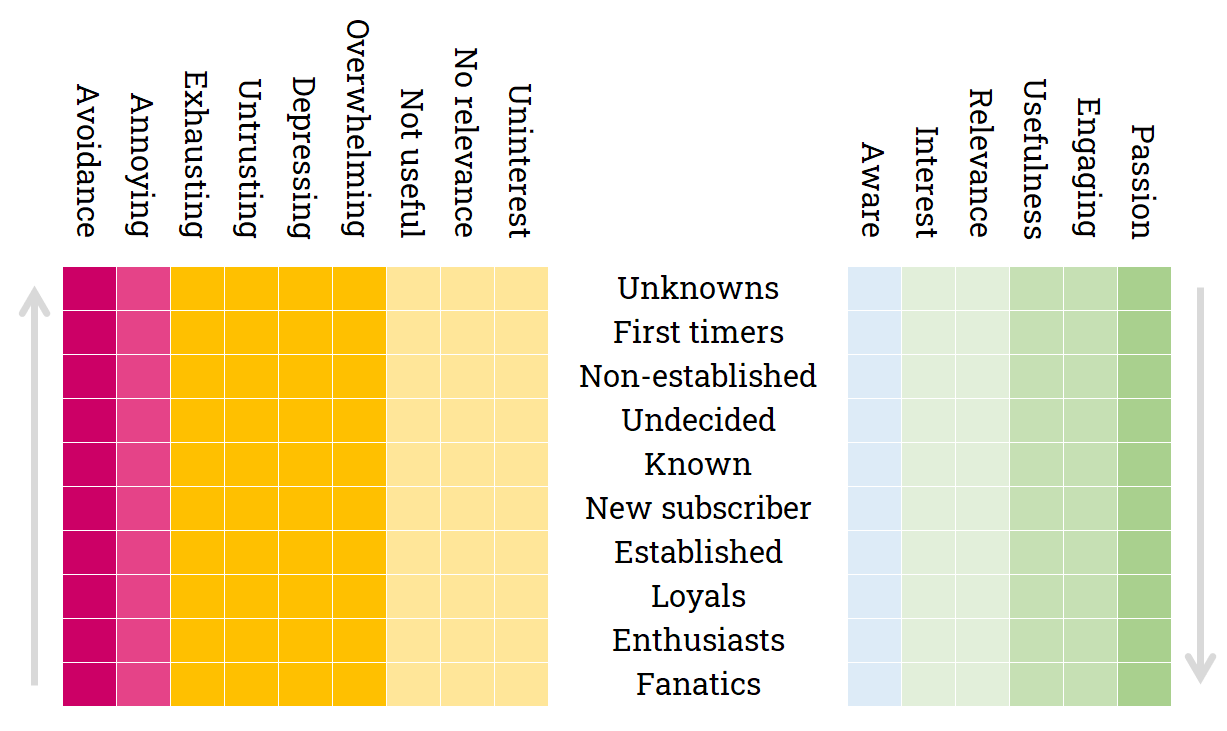 As you may have heard, Twitter has decided to shut down Revue. This is really, really, really bad for all the creators and independent publishers who have been using them as their newsletter platform.

It's even worse for those who have relied on it for a premium paid-for newsletter. Twitter have said that they will auto-cancel everyone by the end of the next billing, basically erasing the revenue for independent publishers.

But wait, you say, couldn't they just move to another platform? Well, yes and no. They can move their lists to another platform, but not the payments. So, all the independent publishers will have to write to everyone, and basically beg them to resubscribe.

The problem, of course, is that we know that most people won't do that. If you force-cancel everyone and then ask people to sign-up again on a new platform, many simply won't. And depending how loyal the audience base is, the churn is likely to be absolutely horrendous (more than 50% revenue just lost).

For publishers like newspapers, the churn for things like this is sometimes even worse. Over the years, I have seen some really catastrophic outcomes when a publisher lost all the payment data.

It's yet another reminder to not rely on the tech platform for any part of your business. As I wrote about in a previous newsletter, we have seen this happen over and over again for more than 20 years.

Never, ever, base your publishing business on someone else's platform.

(Note: I'm fine. Here on Baekdal Plus, I specifically built my own newsletter system so that I would not rely on any tech company for any part of my business. Yes, it was more complicated to do, but it's important.)

Most AIs are not ready ... yet, and won't be for years

Finally, I just want to mention a small thing. Over the past three weeks the entire internet has gone ballistic over the latest AI tools like ChatGPT. I have written about the problems with these tools previously (second story in this newsletter), and how tools that 'make shit up' are very different from tools designed to be accurate.

But now even the CEO of OpenAI (the company behind ChatGPT) is warning people about how to use it. As he wrote:

ChatGPT is incredibly limited, but good enough at some things to create a misleading impression of greatness.

It's a mistake to be relying on it for anything important right now. it's a preview of progress; we have lots of work to do on robustness and truthfulness.

"Fun creative inspiration; great! reliance for factual queries; not such a good idea.

We will work hard to improve!

Now, don't get me wrong. I think there are a lot of exciting things about AI in the future, and there are also other AI tools that are very promising. But right now, the tools that people talk about the most are fundamentally not designed to be accurate. They are only designed to look accurate.

That is a big difference.

If you haven't seen them already, don't miss out on the 'known to work' series, where I talk about the things we know work for publishers.

Also, remember that while this newsletter is free for anyone to read, it's paid for by my subscribers to Baekdal Plus. So if you want to support this type of analysis and advice, subscribe to Baekdal Plus, which will also give you access to all my Plus reports (more than 300), and all the new ones (about 25 reports per year).

Operational security and the dangers of online sharing for journalists

It's tempting to just take a picture of your desk, but be mindful of what it might reveal

newsletter:
Operational security and the dangers of online sharing for journalists