How to measure what articles to cut; Monetizing BuzzFeed News

Welcome back to another edition of the newsletter. Today I have a very exciting Plus report for you. But let's also talk about the monetization (or lack thereof) of BuzzFeed News.

One of the really hot topics of discussion over the past several months has been around publishers cutting their content, and how that has led to a boost in traffic and subscribers.

Yes, you read that right, by reducing the number of articles published, they have gained more traffic and increased their revenue.

Of course, this is not really a new trend. We have seen this pattern repeatedly ever since the financial crisis hit. When publishers were forced to make drastic cuts, traffic levels and revenue levels increased (especially once they also figured out how to focus better when doing paywalls).

But why is this? What is really going on here? And more importantly, how do you measure it yourself?

This is the topic of my latest Plus report. In it, I cover the trends that define this, the changes in behavior that we see, what to measure, and how to measure it for yourself, as well as a discussion about some of the considerations you should make along the way.

So take a look at: "Why producing less news leads to a boost in subscriptions".

Since we are talking about ways that publishers can monetize, let's talk about BuzzFeed News.

A couple of weeks ago, Peter Kafka over at Vox published an article about BuzzFeed's financials and the future for BuzzFeed News (or rather, it was about former Editor in Chief Ben Smith's move to the NYT).

Overall things are going fairly well. BuzzFeed expects to be profitable in 2020, even with news as a loss maker. As they reported:

Peretti said he expected BuzzFeed to turn a profit this year, buoyed by diversified revenue streams and a fast-growing commerce business. But he said BuzzFeed News, with its 200 staffers, would still be operating in the red: "We don't need news to be profitable. Our plan for the year is to lose money from news, and for BuzzFeed as a whole to be profitable.

This, of course, sparked a lot of discussion. What is the role of the news? Is this how news should be? Should news always just be considered a loss-maker and be lifted by other activities and other business ventures?

Some even took it a step further, with Emily Bell saying that if BuzzFeed News can't do it, nobody can.

The New York Times, in one sense, is a spectacular and hopeful success story. But in other ways it reveals the disastrous state of the current media landscape. Connectivity has sorted society into the 1% and the rest. Winners taking it all are a feature, not a bug, of the current technocracy. If Smith, a far-sighted editor deeply invested in his staff and newsroom at BuzzFeed, could not see a sufficiently attractive path forward, then there probably isn't one.

Now, I disagree with all of this.

Not with Peter Kafka or Emily Bell specifically, each of them made several good points in their respective articles, but I disagree with the overall notion that BuzzFeed News has to run at a loss.

I believe that BuzzFeed News could become profitable, and massively so, within a very short period of time. And I also believe every other newspaper has that potential if they really wanted to.

First of all, from a trend perspective, both Peter Kafka and Emily Bell are right that we see the 'winner takes all' effect in the market, and this is even more profound in the US.

The losers are everyone in the middle. All the newspapers and magazines that either don't have enough focus to stand out and to be special to people, or that don't command the market.

This, however, is nothing new. We have seen this happen for years, and ... in fact... it was exactly the same thing back in the print days.

To give you an example. If you lived in Chicago in the 1980s, which newspapers would you buy?

Well, that's easy. The Chicago Tribune or the Chicago Sun-Times. So, even back in the print days, we only had two newspapers that completely dominated the market, with everyone else taking up a much, much, smaller share.

It has always been a winner-takes-all market.

So, the trends that we see today are the same trends we have seen since the dawn of time. Of course, the difference being that the internet has changed the way these markets are put together.

In the past, news markets were defined mostly geographically, leading us to a future of 1000s of newspapers, each commanding their own geographic area.

Today, the market is instead defined by people's interests or needs. We see this with the New York Times, which is suddenly a newspaper people read across the US (and even the world).

But the internet has also atomized people's interests. While in the past, people would mostly focus on mass market publications, today, people turn to the hyper-niche, finding and reading extremely narrow but high value things that apply just to them.

So, there are now thousands of new markets for publishers to dominate. But the problem most traditional publishers have is that they are still clinging on to their old markets.

Before media companies dominated their own little slice of the world. 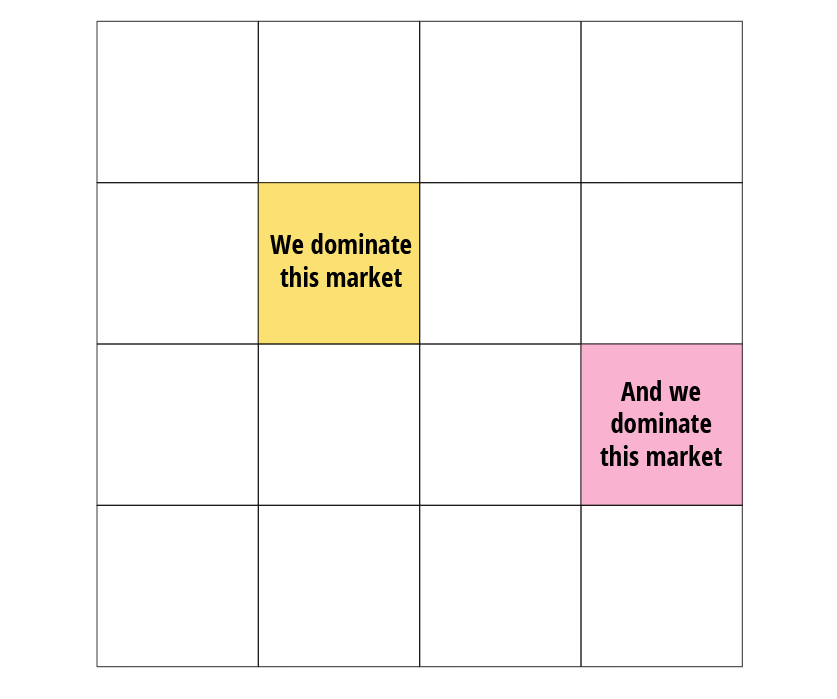 Now the internet comes along and redraws those boundaries, and you look like this: 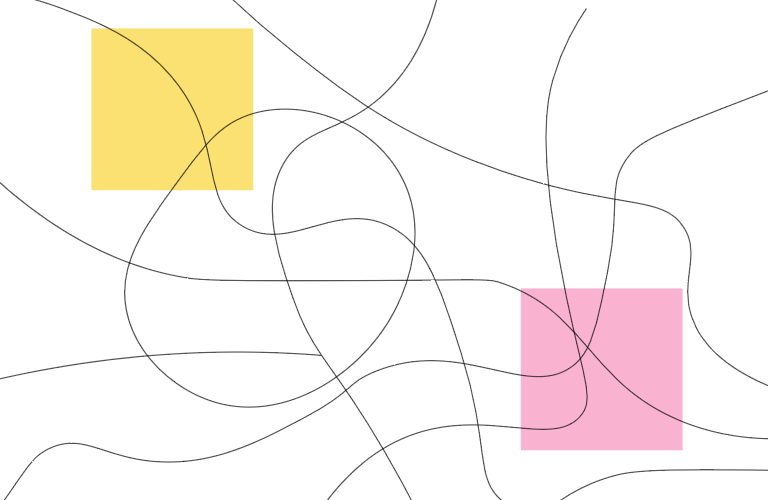 This doesn't work. What you offer to people doesn't fit any of their specific interests.

And the challenge is to find your new market. You identify what it is that you can do, and then you focus on becoming one of the 2-3 publishers who dominate that space (just like always). 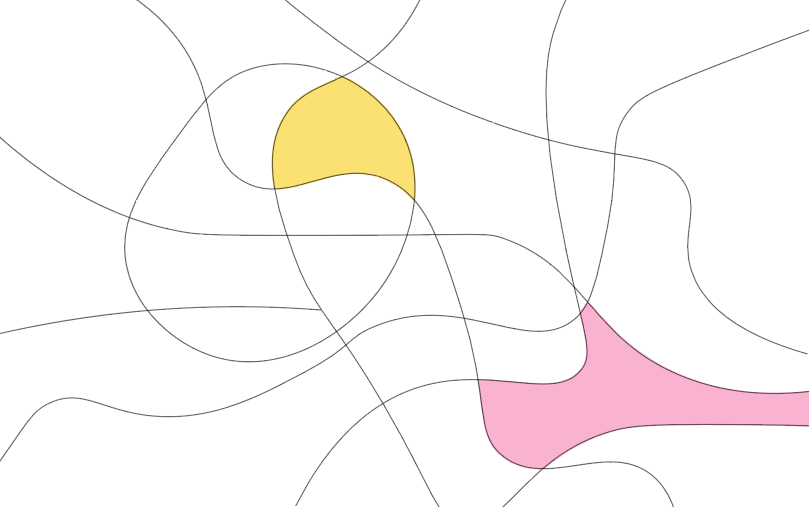 This is the key to profitability.

And so, when I hear people talk about how news can't be profitable, or how the market is a winner-takes-all type of thing, that's the wrong discussion.

But what does all this have to do with BuzzFeed News?

Well, what market is BuzzFeed News in?

It's in the same market as the New York Times and Washington Post. They have positioned themselves as very high quality, hard hitting news, for people across geographic boundaries.

In other words, they have already placed themselves exactly where they need to be. And the only thing left for them to reach profitability is to ask people to pay.

No seriously. They have the position, the quality, and the focus to become one of the top three national news sites in the US.

But, wait a minute, that's not true. BuzzFeed News does ask people to pay. It's on every page, and it works the same way as the Guardian.

Yes, this is true. But it's the wrong model.

A donation model works great when people feel that the company behind the newspaper is focused on journalism. BuzzFeed doesn't have that image.

BuzzFeed is an investor-backed for-profit operation, where its main source of revenue is coming from many things people don't associate with journalism.

As such, asking people to support them is the wrong model.

Instead, they need to implement the same model as the New York Times or the Washington Post, being a subscription model around a metered paywall. They also need to tighten down that paywall so much that everyone is pushed to pay.

And my argument is that if they did this tomorrow, I would predict that they would very quickly become profitable. They have everything they need to make this work. They just have to do it.

And this is true for every publisher. Find your market, focus on being so good that you can dominate it, and ask people to pay.

Anyway, remember to read "Why producing less news leads to a boost in subscriptions".