Making reviews work, raising money, and a look at how many actually pay

The Market for Reviews Has Changed Massively

Every now and then I come across a person expressing surprise or even disgust at brands inviting YouTubers to press events. They think that these YouTubers are mere amateurs, and that they are somehow tainting the much better form of journalism of the traditional press.

It's kind of amusing but also tragic, because the reality is quite the opposite. When we look at the market for reviews today, YouTubers have completely surpassed almost all forms of traditional journalism, and if you really want the best and most detailed reviews, YouTube is the place to go.

But the future market for reviews is more complicated than this. So much has changed over the past couple of years, and the mindset and editorial focus need to be adjusted accordingly.

In this 28-page Plus report, I am going into the nitty-gritty details of it all, and I illustrate exactly what this new market is all about.

As you may have heard, the Dutch news site 'De Correspondent' is moving into the US/International market, and is currently in the process of raising money through a crowdsourcing campaign.

There are many things that I really like about The Correspondent and how they are approaching journalism. In fact, if you want to hear more about their thinking, I suggest you head over to the Media Voices Podcast where they did an interview with co-founder Rob Wijnberg about this launch.

However, I'm currently fascinated by the crowdsourcing campaign itself, so much that I have set up a Python script that tracks their progress every hour.

I plan to write a much more detailed article about this after the campaign is over (regardless of how it turns out), but right now this is where we are at.

Please note: These graphs are for 'per day', but I will have the more detailed graphs for you later.

And if we look at the funds raised so far, we are at about a million dollars.

That's still quite impressive, but not enough.

Keep in mind that we have just passed Thanksgiving, Black Friday, a weekend, and Cyber Monday, so it's not really surprising if the numbers tanked. And it will be interesting to see if things are going to pick up again.

I suspect quite a few people are waiting to see what will happen before they decide to commit or not, and I also have a sneaky suspicion that some big donors are waiting in the background who will step in at the last moment.

But whether that happens or not really depends on the trajectory when we are nearing the end. If people can see that The Correspondent would reach their goal shortly after the deadline because things are still going up, it's kind of a safe bet for investors to step in and secure the campaign at the end. But if things fizzle out and the curve goes flat, it's questionable what the last-minute donors might do.

In any case, it's fascinating to follow, and I do hope that The Correspondent makes it. I want The Correspondent to succeed, not just because what they are doing is interesting, but also as a testament that there is hope for different business models for news in the future.

But, as I said, I will update you with the progress over on Twitter, and then I plan to write a much more detailed article after December 14 when we have the result.

So, stay tuned for that.

I was reminded today by Joshua Benton of a very interesting study (from back in April) called "Digital Subscription Reader Revenue: Benchmarks & Best Practices from 500 Publications Worldwide".

I'm pretty sure I have mentioned it before, but it's just filled with so many nuggets of gold that I thought I would refer to it again.

One great thing is this graph: 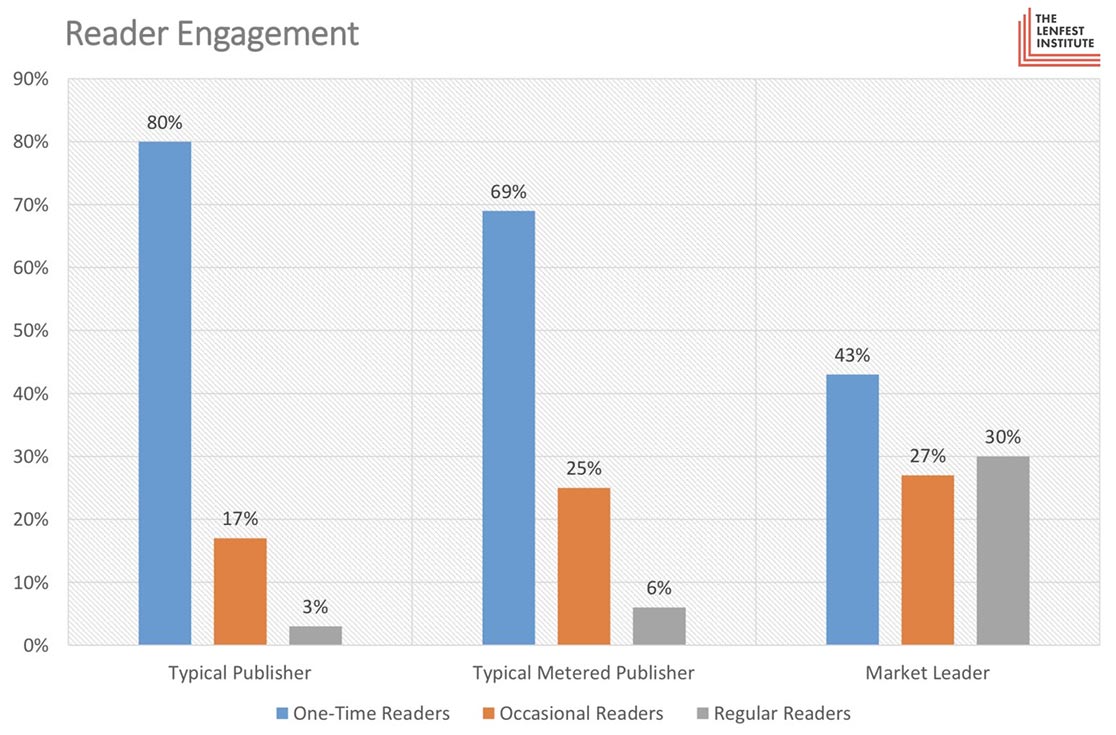 What this illustrates is the share of the audience that are one-time readers, occasional readers, and regular readers. And, as you can see, for the typical publisher only 3% of their monthly uniques are what you would call regular readers.

It puts something into perspective that we all know, but often avoid talking about, which is that only about 1-2% of our visitors choose to subscribe. But if you look at this data, that isn't really that surprising.

In fact, if only 3% of your audience are regular readers, and 1-2% convert, this is astonishingly high.

So, this is just a wonderful reminder of how incredibly crappy the metric of monthly uniques really is. It tells us nothing.

On top of this, there is another problem with the 2% mindset.

So, in the past, your circulation equaled 'your audience'. They were people who only came to you. Today, this model doesn't exist anymore. Think about a newspaper like the New York Times. If you were to look at the New York Times' subscribers, how many of them would also occasionally read news stories from other newspapers?

Quite a lot of them, right?

So, we can't measure 'how many people pay for news' on a per paper basis anymore, because that doesn't make any sense. We have to look at it across the media world as a whole. And when we do that, we see that quite a lot of people pay for some form of news in some way.

In other words, the 2% metric is a lie, and it misleads us into thinking that people act in a way that they don't. The reality is that we no longer live in a mono-news culture.

And I know some of you will now say, "Oh, this is why we need Spotify for News" ... but no, it's not. I have debunked that model more times than I can count :)

But take a look at this study. It's just filled with tons of really interesting information.