Now is the time to start a new magazine, and churn for streaming channels

What a week it has been. Like so many other people in the media industry, I have spent most of the past week following and analyzing the #BlackLivesMatter protests that took place in the US (and the rest of the world).

There are so many things we in the media need to learn from this, and I'm currently in the process of turning my notes into an article. So that will be the topic next week. But this week, I have a few other interesting things for you.

So you want to start a new magazine? Good idea!

The big topic this week is my latest Plus article encouraging you to use this time to start a new magazine. You might think I have gone mad even suggesting this right now. We are in the middle of a crisis, media companies are struggling more than ever, many people have been fired, and many are downsizing.

How can I suggest this? Shouldn't we wait until all of this is over?

But no, now is the best time to start something new. And in my latest Plus article, I explain why this is, and how you should think about building and focusing a new magazine.

So take a look at: So you want to start a new magazine? Good idea!

Rameez Tase, CEO of the analytics platform Antenna, posted an interesting analysis of the churn rate for the big streaming platforms.

As analysts and reporters, we're far too obsessed with topline numbers: how many downloads did Quibi get, how many new subscribers did HBO Max on day one?

Who cares? The truth is that much of that analysis (when done in a vacuum) completely misses the point. We're going deeper: how long do new users stick around, is it because they're paying bargain-basement prices, and what makes them leave?

This is something I very much agree with. It doesn't matter how many subscribers you are getting. What matters is what behavior we see after they subscribe.

For instance, what are people actually doing after they subscribe? Are they just watching that one show but not really engaging with anything else? Are they coming back on a basis that would indicate continuous use? And what about churn?

Rameez then provided two graphs, both looking at churn rates for streaming channels.

The first one looked at churn rates over the first year. And here we see that churn rates are generally getting worse. This is not surprising considering how much more competitive the streaming market is, but it is fascinating to see this effect so clearly. 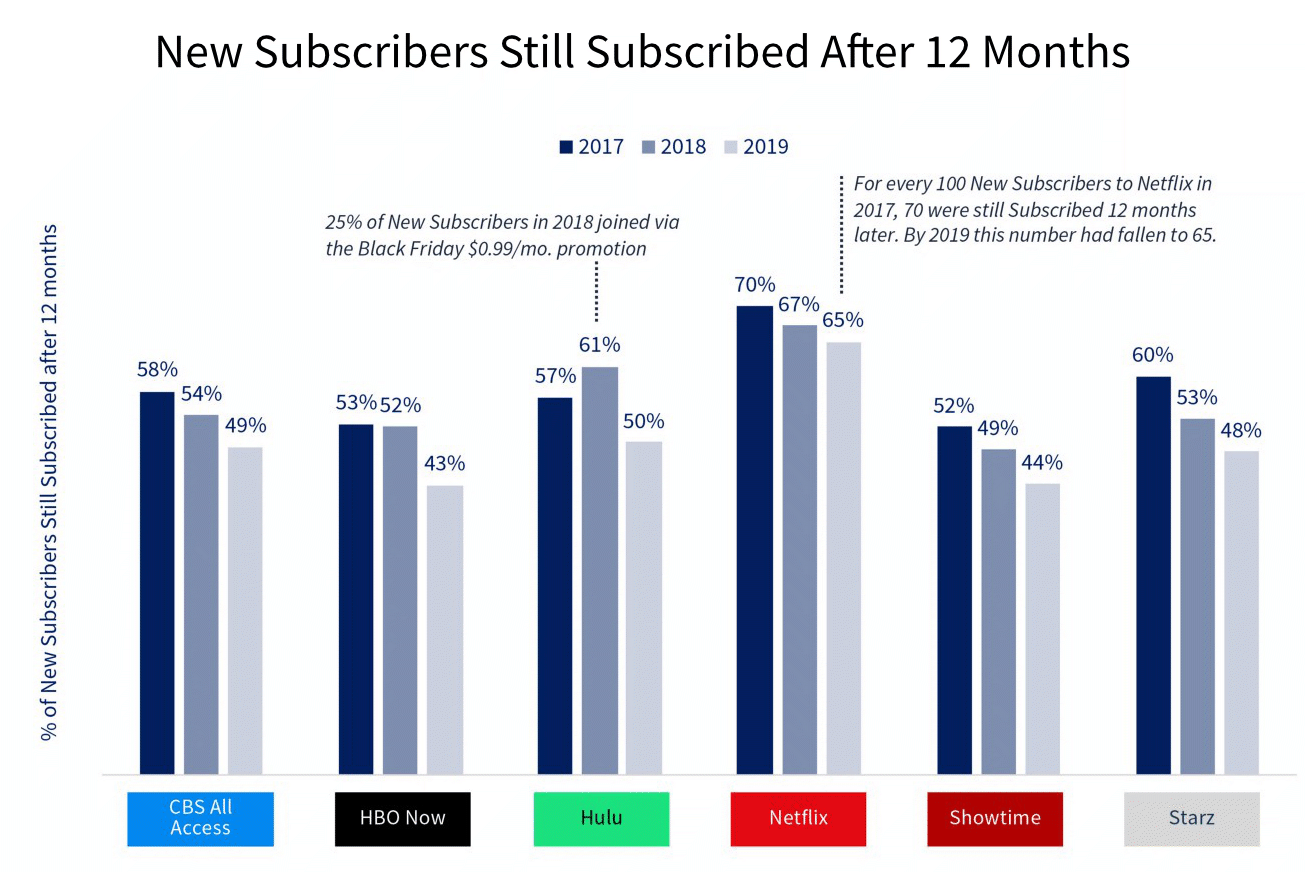 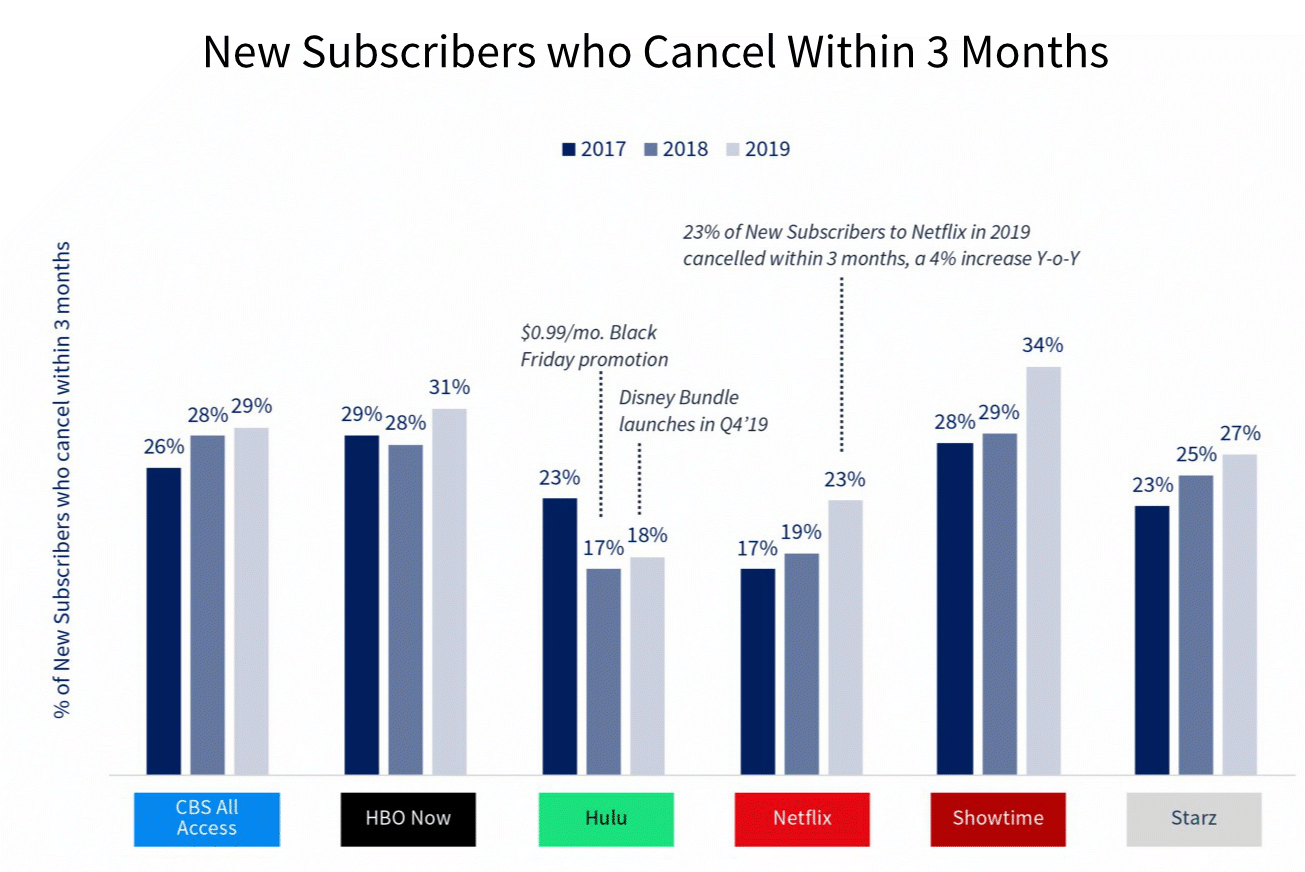 So what should streaming channels do about this? Well, the most obvious suggestion would be to focus more on long-term strategies, and try to build up services that people want to continue to use forever.

And yes, this is certainly a good suggestion.

But there is also another way of thinking about this. We are now living in a world where abundance is the norm, and where it is expected that the public will change what they use on a much more frequent basis.

This is a very different reality than what we had in the past. I have talked about this before, but look at old media. When my father was 20 years old, he subscribed to a national morning newspaper. He is now retired and he is still subscribing to it, and will likely continue to do so until he is no longer here.

In other words, he is a 'subscriber for life'. And this was true for most of the old media.

But if you look at young people, it is completely unreasonable to expect that they will subscribe to something, and then just use that for the rest of their lives.

This is not because young people have less attention span. It's simply because we now have so many more choices, split across far more services.

So a key factor today is to embrace this, and to make it really easy for people to come and go. Don't make it hard for people to cancel their subscription. Instead, make it easy to switch things around.

More than that, give people a good experience, even when they leave. Because if you do that, they might come back the next time you have something specific they really like.

The Telegraph and the Spectator both paid back furlough money

Finally, some good news. In many countries around the world, governments have been stepping in to help businesses through the COVID-19 crisis, and one of these efforts involves paying businesses to furlough workers.

This, of course, also applies to the media, but in the UK, both the Telegraph Media Group and the Spectator managed to remain profitable due to the increase in new subscribers.

As a result, both of these companies have now returned the money they were given by the government.

the publisher revealed on Friday these "prudent" measures and a "very strong subscription performance" have helped it remain profitable.

It is therefore paying back all the money it claimed from HMRC to furlough workers as part of the job retention scheme.

In addition, all staff have now returned to a five-day week and those who worked during May with a reduced salary and working hours will be compensated for lost earnings, TMG said on Friday.

As reported by the Press Gazette, the Telegraph has seen a 200% increase in new subscribers in March alone, helping them reach more than 500,000 subscribers overall.

And this is a story we have been hearing pretty much from every country. Any newspaper which has been investing in a paid-for strategy is doing much better.

And it isn't just because advertising is down and subscriptions are up. It's also that, when you start to focus on a paid-for model, your journalistic focus changes as well.

Just think about how many publishers, a few years ago, were focusing on creating quick snackable articles for Facebook. Even if you tried, people wouldn't pay for that.

But now we are seeing how a shift in focus is really starting to work, and for some newspapers, this has allowed them to come out of this crisis stronger than before.

There is still a lot of work to do, and many publishers are not this fortunate. But this is a very good trend.