Publishers dealing with a market of abundance; Closing print vs online

Welcome back to another edition of the newsletter. Today, I have four exciting things for you.

How the media industry now looks more like the fashion industry

Many people in the media industry have started asking when we will reach the point of 'fatigue', whether that's subscription fatigue, streaming services fatigue, podcast fatigue, etc.

People ask this because we have moved into this new world where there are simply more options available to us than we can manage. So how do you decide whether you should subscribe to Netflix, Hulu, Amazon Prime, Disney+, or the many other streaming services?

But this is the wrong way to think about it. Because what people are doing is thinking about this like old media, where you have to pick one, and then stick with that for life (like your parents did).

The new world of media doesn't work this way. We are not going to see people just subscribe to one premium service and then stick with that for life. Instead, we will see a much more dynamic future, where the way people decide what to interact with in the media is similar to how we decide what clothes to buy. And you never hear people talking about there being fashion shop fatigue.

In my latest Plus article: "Publishers, you need to think like fashion companies", I go much more into the details of what this is all about.

There is a new study out that looks at what happened when music magazine NME closed their print magazine, and went online only ... and not surprisingly, nothing happened.

Here is a graph that illustrates the traffic in terms of time spent before and after they closed print. As you can see, the online traffic didn't change at all. 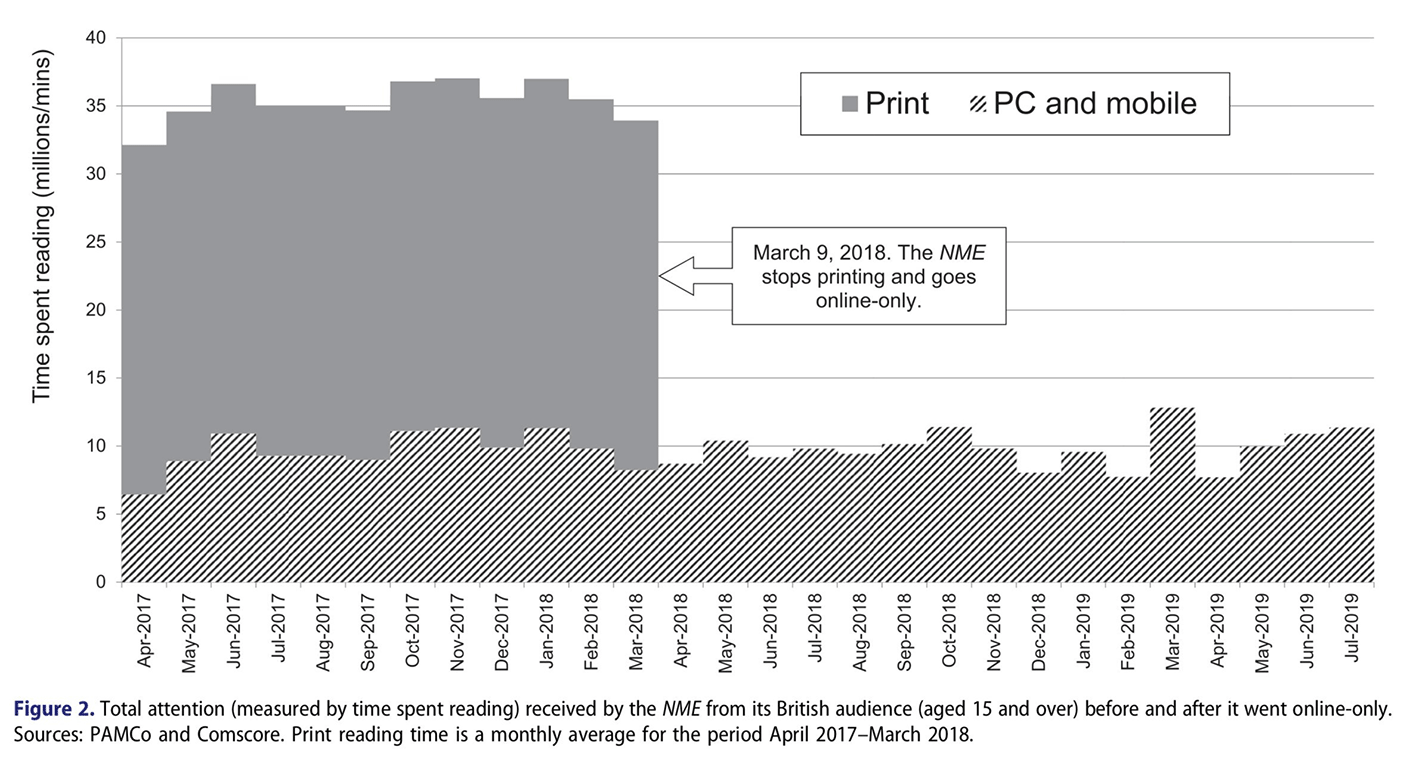 This is very similar to what we have seen many times before. As the report also points out, there was a similar study done about The Independent newspaper, when it too became digital only. 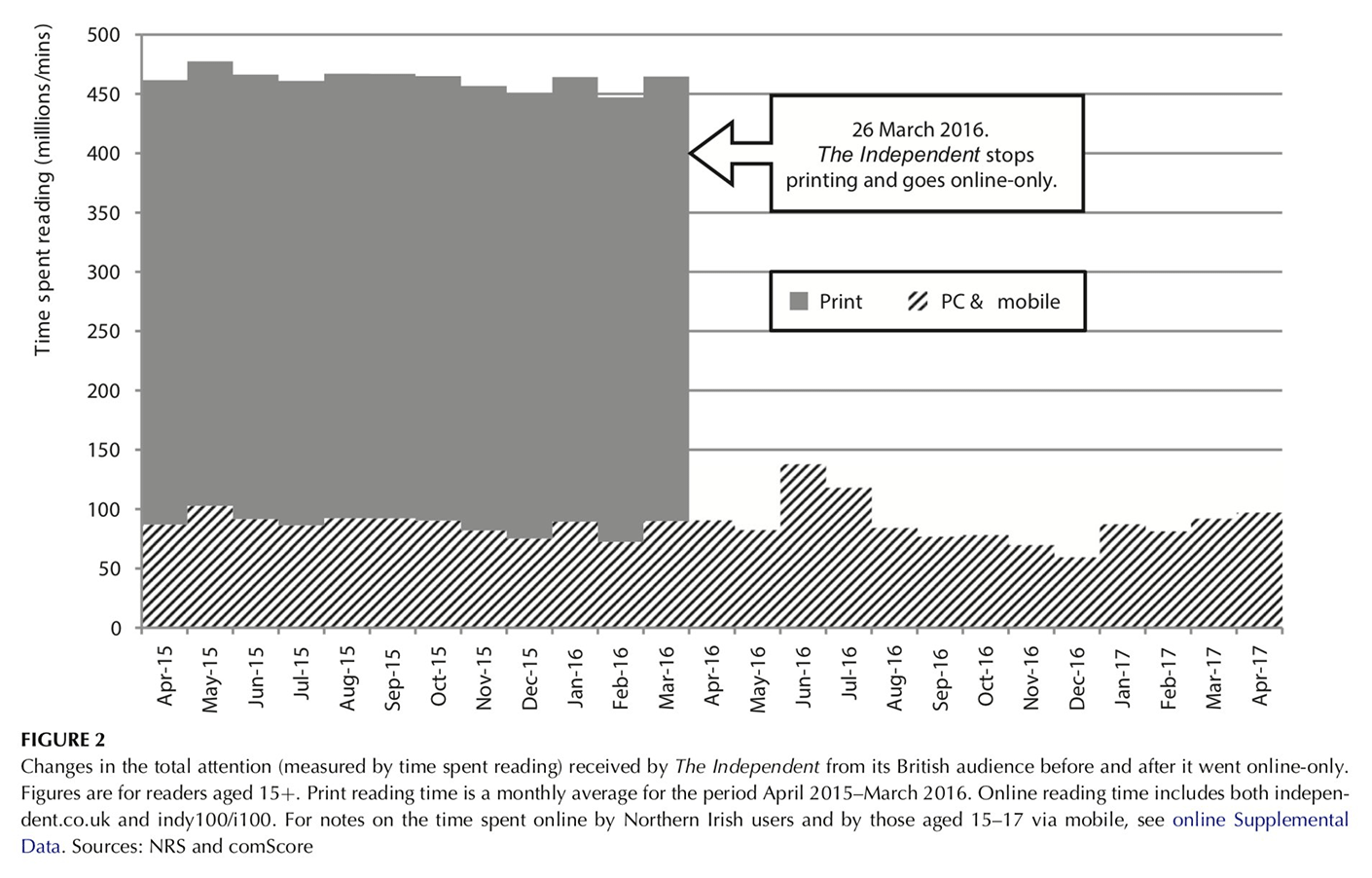 While this might look bad, you should not be surprised by this at all. It's highly unlikely that anything else would have ever happened, and it's all because of how different audiences behave.

I wrote a much longer Plus article about this last year, called: "Why Don't Print Readers Show Up In Digital?", where I go into much more detail about not just this specific case, but the changes in behavior overall.

But to very quickly summarize:

Think about the different types of audiences a newspaper or a magazine has.

This is why this graph doesn't change. None of these groups would cause the traffic patterns to change. And this was also what happened to The Independent.

When it closed its print newspapers, all their old print audience simply moved to other print newspapers. As Chris Duncan, Managing Director of Platform Partnerships at News UK, explained in a tweet at the time:

Note - About half of the print buying audience turned up in other newspapers - they were print loyal rather than Indy loyal. Half disappeared so main point still stands.

And the rest... well, they likely just did this: 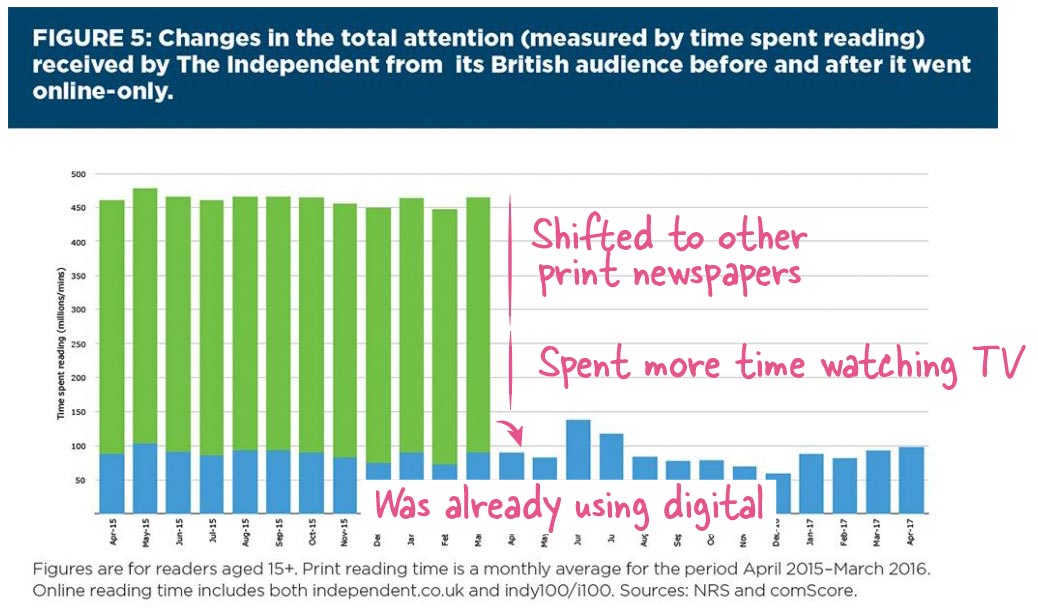 This is simply the reality of things. But it also illustrates that print and digital are completely separate markets. This wasn't always the case, but today there is such a wide gap across many factors between your print audience and your digital audience.

Mind you, the graph above only looks at "total attention time". There are obviously other metrics to look at. Like did it increase the number of subscribers? What about total reach? ... and other factors like that.

And in the study above, they point out that total reach did go up online. However, if total reach goes up, but total attention time does not, this would indicate another problem.

But what we can learn is that publishers need to stop talking about 'transforming from print to digital'. That ship has long sailed. It's not about transforming from one thing to another anymore, because as you can see in these graphs, that is not happening.

You may not have heard this, but there has been an ongoing story on YouTube that has captivated the attention of many YouTube creators, and I would like to briefly talk about it here, because it's actually a big deal.

What happened was that one of the very famous YouTubers, Markiplier, did a live streaming event, where he asked people to use emojis to vote for different things during the show.

His very engaged audience then did this... a lot, which resulted in YouTube's anti-spam system activating and automatically banning people's accounts.

And we are not just talking about banning them from posting any more comments, or just their YouTube accounts. No, people's entire Google accounts were closed down ... permanently.

So Mark posted a video about this, and he was quite furious. And he promised his viewers that he would do everything he could to get this fixed.

You can see the video of him talking about it here.

And today, as I'm writing this newsletter, YouTube have admitted that they "definitely f**ked up" (exact quote), they have reinstated people's accounts and apologized. And Mark, again, posted a video updating everyone about what actually was being done.

So, it has been fixed.

But this story links to so many other stories that we see these days, like the story about Apple Card and how automated systems are giving people very inconsistent credit ratings based on completely unknown and non-transparent factors.

But there is also a problem with just how 'risky' these systems make us.

I was not personally affected by any of this (I don't watch Mark's videos), but a substantial part of my business is using Google services. I use Google Drive for all my files, I use Gmail for all my communication, I wrote this newsletter in Google Docs, which my copy-editor edited, also in Google Docs. I use Google Keep for my notes, I have my own YouTube channel (very tiny), and the list goes on.

So the idea that I could potentially just lose access and have everything deleted simply because an automated system thought I had posted too many emojis one day ... that's scary as hell.

Now, mind you, I'm less at risk than other people, because some of what I do is linked to my Google G-Suite Business account (which I pay for). But the thought of this is a really big problem.

But take a look at Mark's videos. It's a very interesting story and something we need to be much more mindful about.

BTW: Speaking of YouTube, they recently posted a video explaining to creators how to deal with COPPA, the US law regulating what companies can do around children (which also applies to any European companies creating content that can be seen in the US, the same way as GDPR applies to US companies). This is also worth watching.

And, several YouTube creators think this will mean the end for their channels, but there is some confusion around this.

And finally, just a heads up. The European Community News Summit was recently held, and they have uploaded all the talks so that you can see them from wherever (thank you for that!).

You can see them all here: European Community News Summit - Videos