Welcome back to the newsletter. It's December ... and I hope you are getting into a festive mood.

Anyway, today I have three exciting things for you:

Back in 2017, I wrote an article about editorial analytics, and I have received several follow-up questions about this over the years, so let's revisit this very important topic.

Editorial analytics actually looks at many different things, but there are two main reasons why you should use it.

In my latest Plus article, I explained how this works and how we can use this, through a number of examples.

So take a look at: A guide to using editorial analytics to define your newsroom.

Social media where news should be

A while back I wrote a Plus article called: "Publishers need to get news off Facebook". In that article, I talked about a metric that we use to determine whether publishers should distribute their articles on Facebook, and I wanted to explain that part in a bit more detail (which you can read below).

Now, full disclaimer. This article was originally intended to be published by Dagens Media, for which I write a monthly column. But one thing led to another, causing me to write something else for them instead. But because of this, all the examples and comparisons have a strong 'Nordic' look.

But, I still think this will be valuable to you. This metric I talk about below is really something every publisher should think about.

This year there has been a huge debate in the media about newspapers vs. Facebook. We see that, in many countries, more and more people get news from Facebook, while at the same time, Facebook is focusing less and less on the news. So how much should we focus on Facebook?

Well, we can get the answer to that by just looking at the numbers. And, to illustrate this, I'm going to compare Norway, Denmark, and Sweden, to show you who is doing well and who is not and how that relates to Facebook.

We will start with Norway.

Here is what people in Norway define as their most important news channels. 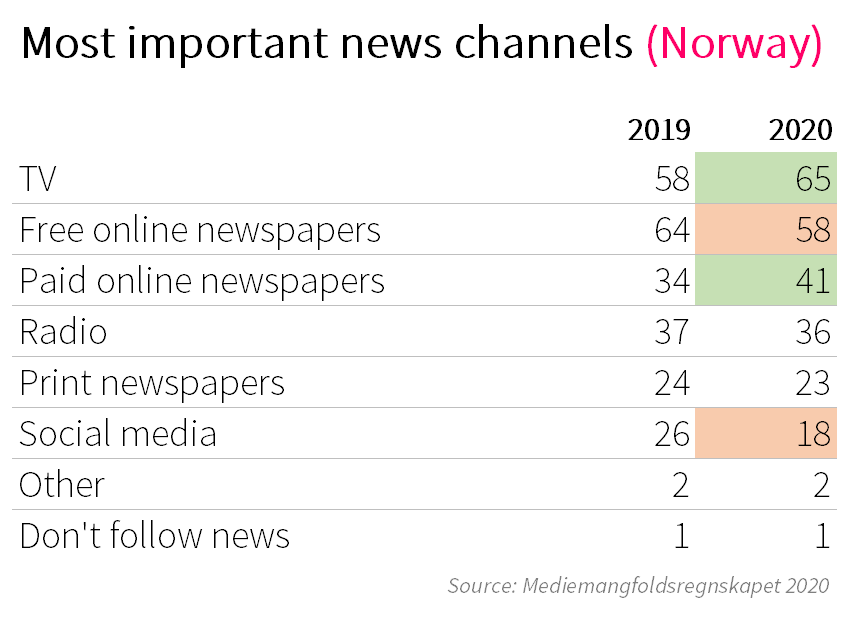 As you can see, TV is dominating (not surprising), but the newspapers are very close to the top. More than that, while the free newspapers are in decline, the paid-for online newspapers are growing. At the same time, social media, like Facebook, is not considered an important news source.

This is amazing because it clearly illustrates that publishers in Norway have found a way to be valuable to the public directly. People are turning to them instead of going somewhere else, and that trend is growing!

This is how it should be. When you ask people where they want to get their news from, everyone should say: "From the news sites".

Now let's look at Denmark. Here we see this result:

First of all, these two studies were done separately by different groups, and the questions were not exactly the same either, so you can't compare Norway and Denmark directly. But what we can look at is the relationship between the data and the trends.

So, in Denmark, again, we see that TV dominates. But, look at social media in comparison to paid-online news. Social media ranks higher than the newspapers, and it's growing, while paid-for online newspapers are used less and are in decline.

This is bad because it indicates that Danish newspapers are struggling to be valuable to the public and that people find them less relevant.

Also, remember that when people say they go to Facebook for news, that's not really what they are doing. Instead, the primary reason why people turn to Facebook is that they just want to see what their friends and family are doing, and then they come across news by accident. So when people say that they get news from Facebook, they actually mean that news is not important to them.

This is not good.

Now, let's look at Sweden. Again, the study here was done slightly differently from the others, so we can't compare the numbers directly, but we can look at the pattern. And in Sweden, we see this:

So here we see that all the metrics increased, but only slightly. TV again is dominating, then morning newspapers, and then Facebook. Also, notice how close Facebook is to the morning newspapers. In Norway, they were very far apart, but in Sweden, it's almost 50/50. In other words, Sweden is kind of in the middle between Denmark and Norway.

So these metrics are really interesting, and they show that the better newspapers are at appealing to the public directly, the fewer people use Facebook for news.

Of course, all of this is academic until we look at revenue. Publications in all three countries have generally increased their revenue, but let's look at it from the public's perspective.

How many people are willing to pay for online news today? Well, the result is this:

This is fascinating because you can clearly see a correlation between direct traffic and willingness to pay.

In Denmark, publishers are very clearly struggling to convince people to pay, and that's not surprising considering the numbers I showed you above.

Norway is doing amazingly. In Norway, direct traffic went up from 34 to 41 percent ... which resulted in people's willingness to pay also going up from 34 to 45 percent.

It can't really get any clearer than this.

And then, of course, we have Sweden where, well, it's growing, but only very slowly. But because Sweden has a higher rate of direct traffic than Denmark, the number of people who want to pay is also higher.

This is such an important metric, and it helps us understand where to focus in the future.

In the past, back when all online newspapers were free, it made sense to put our content on Facebook to get as many pageviews as possible, to increase the ad views. But in this new reality we live in today, where the focus is mainly on paid-for online newspapers, it's very clear that this old strategy no longer works.

Every time people turn to Facebook for news, it lowers people's willingness to pay us directly. So, using Facebook as a news distribution channel is clearly the wrong strategy, and we have to change that.

But the problem is not just the business model. It's also about journalism. When we see a pattern like that in Denmark, it illustrates that there is something wrong with the journalistic focus. People clearly do not find the news relevant, useful, or personally interesting.

The style of journalism, the tone, the approach, and the focus areas don't resonate with the public. We are too disconnected from what the public actually needs from a newspaper.

In Sweden, it's a lot better, but nowhere near as good as in Norway. And so, this is what every publisher needs to focus on.

Remember this the next time you discuss Facebook and newspapers. It's not good when people get news from social media channels. News should be something people get 'directly'.

A couple of months ago, I was invited to give a talk at the Twipe Digital Growth Summit 2021 about "The future role of journalism". Now, if you attended the summit, you will already have seen it, but if not, I have uploaded a recording of my talk, which you can see below.

My talk is about two very important things. How news is becoming a standalone product, and how that ties into solution journalism.

But take a look.

BTW: As a side note. What you see in the video above is my home studio setup and how I am now doing presentations. I have promised several people that I will make a behind the scenes video of this ... and that is still coming (I might do that over Christmas). But here is a quick behind the scenes clip of what it actually looks like.