The fight between Google and Publishers, and Tasty's success as a brand

In this edition of the Baekdal Plus newsletter, I have some exciting things for you.

Plus: What really happened to publishers when Google entered the market?

This week's Plus article is an extremely important one, because it's about this ongoing battle that we see between publishers and Google.

Last week I published my analysis of the News Media Alliance's report that claimed that Google is making $4.7 billion from news content, a number that was easily debunked as pure guesswork, but in that article I also talked about some of the misconceptions that we see in relation to Google.

In this week's article, I go into this much further, because in the media industry we have a very unhealthy notion about how Google has impacted news publishers. Many editors and journalists think that everything would be fine if Google could just be broken up or if they could be forced to pay for linking.

As a media analyst I understand the frustration that many publishers feel, and I too want newspapers to have a much better future. But breaking up Google or getting paid for linking isn't going to change anything.

So in my latest Plus article, I explain what Google really did, and why brands and the public are using it the way they are.

Read more: What really happened to publishers when Google entered the market?

A hashtag for 'journalism business models'

For a long time, Corinne Podger has been pushing for the media to adopt the hashtag #journbiz to identify when we tweet about business models related to journalism.

If you're studying journalism business models, please use the hashtag #journbiz. Folks working in this space have nominated it as a preference in a short poll, and it helps make this essential work more visible.

I think this is a great initiative, and it would definitely be nice if we could just pin this one hashtag in Tweetdeck to get up-to-date with the latest findings.

So I'm happy to promote her efforts in the hope that we could actually make this happen. If you are studying journalism business models, or if you have uncovered data or examples related to this topic, consider adding the #journbiz hashtag to highlight it.

Tasty's success as a brand

Recently at Digiday, we could read how Buzzfeed has been able to turn their Tasty brand into a retail powerhouse, with expected sales of Tasty branded products reaching a staggering $260 million in 2019.

Of this, their Tasty cookbooks alone have sold 800,000 copies, and their kitchenware line (sold at Walmart) has sold 4 million items since launch.

I won't go into all the details, because you should head over to Digiday for that, it's certainly impressive, but I will point out two things.

First, as my long-term readers might remember, I wrote a Plus report about Tasty back in January 2017, where I illustrated why this model was so interesting. Granted, back then I was only talking about their first cookbook (which was personalized) and the content model.

And this model is still working today.

Secondly, the real power of Tasty's success is not the publishing part, but how they became a brand. Sure, it started out as content on BuzzFeed's site, but today, what really drives it is the brand focus.

This is an important thing to remember. If BuzzFeed Tasty had just stuck to posting 'viral' recipes optimized for Facebook, they would be nowhere near the revenue that they have today.

Facebook has been an important marketing channel, where content created awareness, scale, and recognition to drive the other results, but the money is coming from the brand itself, and how (for example) it is sold at Walmart.

It's the same thing with their cookbooks. They are not bad cookbooks, and they follow a very successful ... uh... recipe for generating sales. Their books have the type of good but generalized 'quick' recipes that make them perfect for in-store promotional displays.

It's the kind of cookbooks that a store like Walmart would place next to their kitchen section, or that people would feel safe to give to some young person as a present.

It's the same with their food products, for instance, their ice creams (which are actually made by Nestlé). 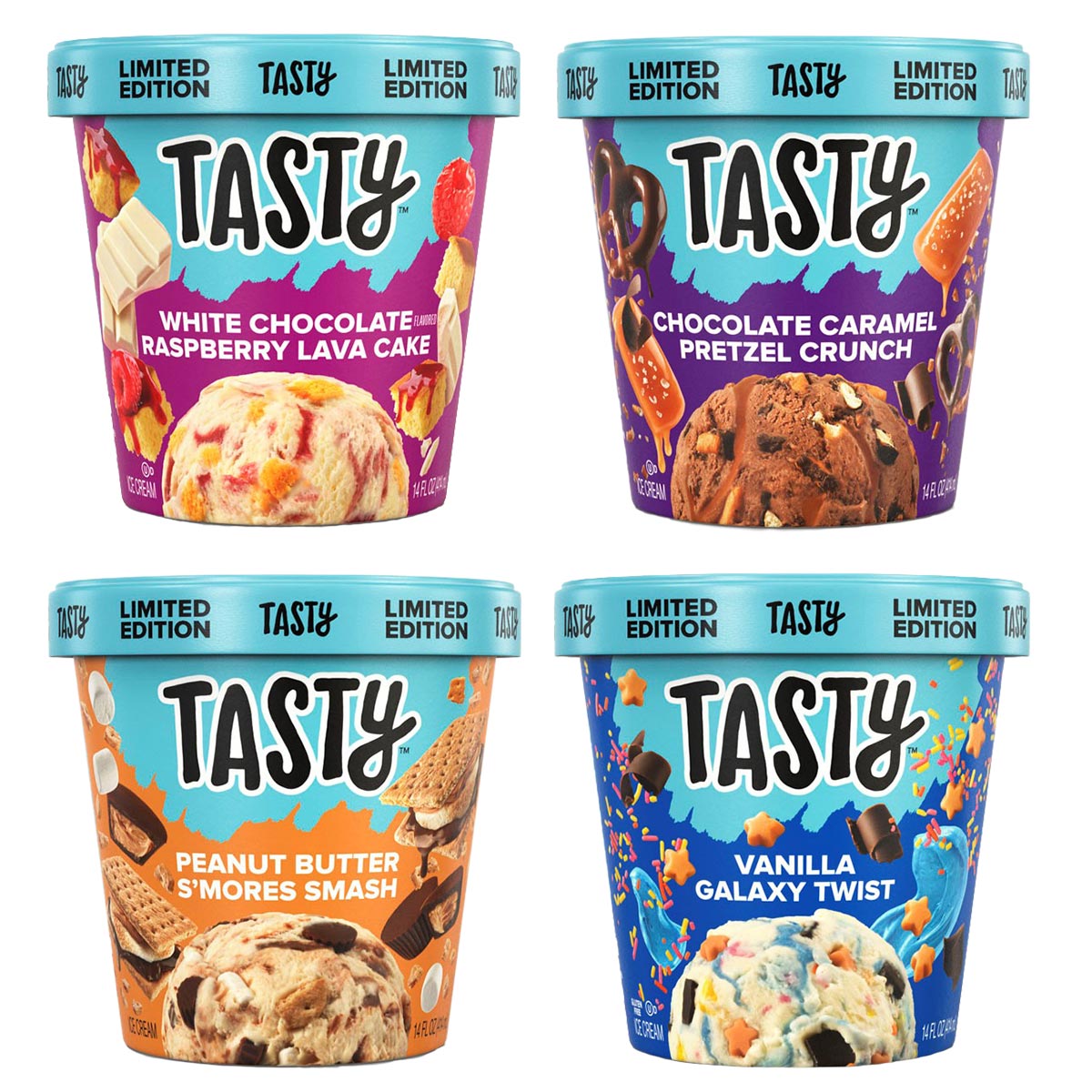 The reason why this sells is obvious. When people walk through Target to buy their groceries, they come across this in the freezer section, they recognize the brand from Buzzfeed or Facebook, it looks really good, and so they buy a few of them.

It's such an easy decision.

But what makes it work is not really the product itself. It's a combination of all these factors. It's how Tasty started out as a publisher by driving massive exposure with content that was simple, but still much better than a lot of other content on Facebook. It's how they have turned this into a brand. It's recognition: the brand partnerships/licensing with trusted distributors and manufacturers, and the placement of their products in massive supermarkets.

And this is such an important lesson for other publishers.

For instance, if Tasty wasn't also a publisher, it wouldn't have as strong a brand. Similarly, if Tasty hadn't focused on becoming a brand and made arrangements with Walmart and Target, it would never have reached this level of sales.

But think about how this could work for other publishers.

First of all, it's important to remember that Tasty is a niche brand. Yes, it might seem like they are doing a very big and mass-market thing, but it's actually very focused.

Tasty is a food brand, focusing mostly on the type of food and cooking that is quick, easy and fun to do. The products they now sell fit into that, with kitchenware, spice kits, ice cream, and cook books.

If Tasty had been far more generalized, focusing on all kinds of different topics, it probably wouldn't have been able to do this. It's the niche that creates the branding effect.

So, as a publisher, you need to think about it the same way. I don't see this ever working for a generalized newspaper, but I do see it working for more specific magazines.