Plus: The future trends that define Disney+

Earlier this month, Disney revealed their strategy for Disney+, ESPN+ and Hulu, and while many see it as just another streaming service, it's actually far more interesting than that.

What Disney understands is that the future streaming markets will be divided. There is the 'individual' market, niche markets, the bundle market, and the brand market. Each of these are very different and have different revenue potentials, and Disney is now trying to dominate three of them.

This is a big deal, not just because of the size of Disney, but more so because of how it fits into the future trends of TV.

In this Plus report, I go into the details of what this trend is about, and what Disney is doing with it.

I came across a very interesting study earlier this week, which is not specifically about the media, but it tells us a lot about how the problem with gender inequality starts. A number of researchers had asked kids to draw a scientist, and in most cases, kids depicted the scientists as men.

There are improvements, though. In the 1960s and 70s, only 1% of the drawings were of a female scientist, but in 2016, the rate had increased to 34%. Still not good enough, but at least it's progress.

What I find really interesting though, is when we look at the graph over time and by age. 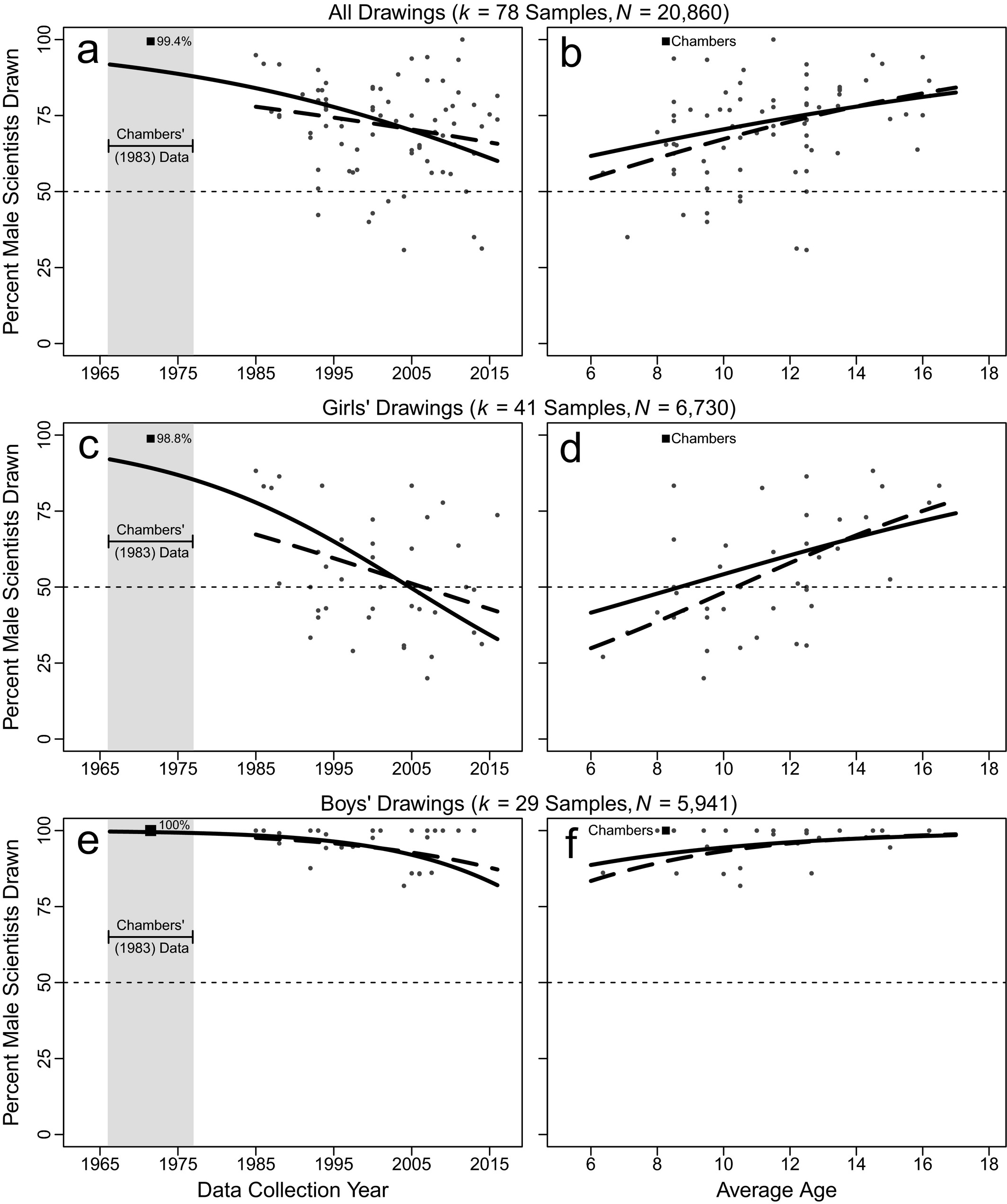 As you can see, in the 1960s, a staggering 98.8% of the girls depicted scientists as men (middle graph), whereas in 2016 we have a much better number. But then look at the age (the second row), notice how 6-year-old girls are far more gender neutral than the 17-year-olds.

But also look at the boys (last graph). They seem to have been locked in already when they are 6-years-old.

And what is even more interesting is that this is very much defined by the profession. As the researchers explained:

One study asked 206 elementary school children to draw a scientist, a veterinarian, and a teacher. Among drawings in which sex could be determined, 66% of scientists were male, compared to 40% of veterinarians and 25% of teachers. In other words, children drew more males than females only for scientists, but not for the two other occupations in which women's workforce representation was higher.

The problem here comes from many things. A part of the problem is with the parents, who from a very early age start to teach their kids things that are detrimental to their development.

For instance, boys are given playsets that are about achieving things (sports, fire trucks, competitive games), whereas girls are given dolls and tea sets. And this problem often starts right after they are born. And BTW: don't forget the grandparents here, they often give kids extremely gender-defined gifts.

But the other problem is with schools and the media. As the study said:

During formal science instruction, children could form gender stereotypes about science and mathematics partly based on teachers' attitudes and beliefs, as some correlational studies have suggested.

As children grow older, their opportunities for learning stereotypes about scientists also expand beyond school. For instance, middle school children have reported basing their drawings of scientists on media sources such as television shows, movies, books, and magazines. These mass media products have usually depicted many more male than female scientists, at least in prior decades. Children may then learn to associate science with men as their exposure to male scientists accumulates during development.

And they are completely right about this. We have long known that there is a problem with gender representation in the media. We know, for instance, that when we cover topics in the news, there is a much higher likelihood that the person being interviewed will be a man.

We all have a role to play here. The real problem is the accumulation of gender bias, and we need to look at it as such.

So, I want you to set up a metric that defines the gender focus of your articles. Measure whether an article is about a man or a woman, and what gender the sources you include are. And if you can, I also want you to define whether that report was positive or negative in relation to these people.

Then in six months, I want you to look at this and evaluate (and please share the result if you do).

You can read the full study here (it's fascinating).

I'm currently working on a number of interesting things.

My next podcast (or maybe an article depending on how it turns out) will be about news-avoidance and news-fatigue. I have done a bit of experimentation with this, and it was quite an eye-opener. But I will have more about this next week.

Finally, I just want to highlight this Twitter thread from Tom Coates. He has interviewed a bunch of people about social media use, and he highlights a number of very important patterns that many people often don't get.

For instance, how Instagram stories is the social channel young people prefer today; the problem with how harassment is forcing women to be silent; and how the older generation really struggle to deal with social media. I love this part:

Younger generations are *far* more savvy about the content on social media and on how to manage their identities and the implications of them than older people.

In fact, some younger people are explicitly worried about the effect of social media on their parents along the lines of the "I lost my uncle to Fox News" meme.

Anyway, it's a great thread.

Oh... and don't forget to scroll back up and read about Disney+ ;)