The low attention span of news readers, and a guide to trust

Welcome back to another edition of the newsletter. Today I have two very exciting things for you.

Plus: A guide for how publishers can truly build trusted journalism

My latest Plus report is all about how to build a truly trustworthy news organization. This is a big report, and I'm approaching this from a different angle than what you might expect.

Most studies around trust look at how people think about the news, and all the external problems that we have. Things like press freedom, politicians attacking the media, fake news, and so forth. And those things are problematic ... but they are kind of missing the point.

So, I'm not looking at any of these things. Instead, I'm looking at all the things that we should do ourselves, internally, in order to make ourselves stand out as a trustworthy place to go.

I'm looking at the many things we do that erode trust, the cultural problems that exist, the problem with how trust is disconnected within media companies, how the way we do journalism makes us untrustworthy, and much more .

My point is that I don't believe that we can ever solve the problems we have around trust by focusing on external factors. Yes, it's bad that there is so much fake news on Facebook, but no amount of fact-checking on Facebook is ever going to make us, as newspapers, more trustworthy. We can only do this by changing ourselves.

So, please read: A guide for how publishers can truly build trusted journalism

One of the most persistent misconceptions that most people have is that, in the digital world, people have a very low attention span. We see this in particular when people talk about news. We will hear editors say that people online only read a news story for a few seconds before moving on, and that we have to make it short in order to make it work.

I have been speaking out against this misconception for years because it's not the public who has a low attention span, instead it's caused by the way we create news.

Let me illustrate this to you.

We are measuring it wrong

The main reason why many think people have a low attention span is because of how we measure it. Most publishers simply look at the total number of pageviews, per article, and then they compare that to the total time spent, which most analytics services will happily calculate for you automatically.

The result of this is often abysmal. On average, people seem to only spend a few seconds on each page. But this is not just true for digital. It's true for all formats of news.

So I went out to buy a print newspaper (well, I tried but I couldn't find one so I turned to the epapers instead), and then I did the exact same analysis.

I looked at one of our national newspapers, on a Wednesday. It came with 3 sections that day, totalling 70 pages.

Within these there were 89 articles, 42 ads, 15 editorials, and 7 other items (like the TV guides, crossword puzzle, culture calendar, etc). Totalling 153 things that people can look at.

With this we can do the exact same calculation that we do in digital. We look at the total number of things that people can look at, and simply divide it by the time people spend reading the newspaper.

So, for instance, if we assume that people spend 20 minutes each day reading it, that's 1,200 seconds, which we then divide by 153. And this gives an average time spent per 'item' in the newspaper of 7.8 seconds.

Yep ... on average, people only spend 7.8 seconds per thing in the newspaper.

So, I did the same analysis, but then used 30 minutes instead of 20, and the result here was of 384 items in the Sunday paper, people only spend an average of 4.6 seconds per item.

Of course, this doesn't just apply to newspapers, we can do exactly the same analysis with magazines. Take Vogue as an example.

Here, I don't have to count the pages myself, because WWD has gracefully done it for me, and they report this for their September issue:

As it has in the past, Vogue came out on top this year with 356 ad pages inside a magazine totaling 596 pages, making the book 59 percent advertising overall. Very respectable numbers that roundly beat the competition, but it's a big drop compared to 2009, when the magazine had 427 pages of ads. That year was when the recession hit the industry and was then one of the worst years it had ever seen. In 1999, Vogue had 562 pages of ads, nearly the size of the entire magazine this year.

Of course, you might argue that I'm defining the time too short. Maybe instead of 20 minutes, they spend a full hour reading Vogue. Well, if that's the case, then it's 6 seconds per page instead of 2.

My point here is three things:

First of all, it illustrates how attention span was just as short in print as it is in digital. Per page, people didn't sit down to read every single article, nor did they spend several minutes with each article.

Instead, people would flip through the newspaper and only stop to read a few of the articles that would get their attention.

It's exactly the same way people behave online. People browse around all day, and they don't really pay much attention to most of the things you give them.

But then, every now and then, something interesting comes by, and then they spend 10 minutes reading it. There is literally no difference between how people behave in print vs digital.

What is different though, is that in the digital world, people have many more options, and with mobiles, we can consume content across a much wider period of time each day.

So, while a printed newspaper was only really consumed in the mornings over breakfast or in the afternoon after work, a digital newspaper is consumed all day, but in much smaller bits ... and people might not limit their attention to just a single newspaper.

But this doesn't mean people have a low attention span. It's just a different allocation of those attention minutes.

Secondly, this illustrates how silly this metric is. You should not measure 'average time per article' this way. It makes no sense.

In print, you don't measure time per article, because the enjoyment of a newspaper is the time with the package itself. So think about this in the same way in digital as well.

With Vogue, people might spend 30 minutes reading a monthly magazine, so how much time do people spend with your digital site over the same month?

This is the way you should compare this. 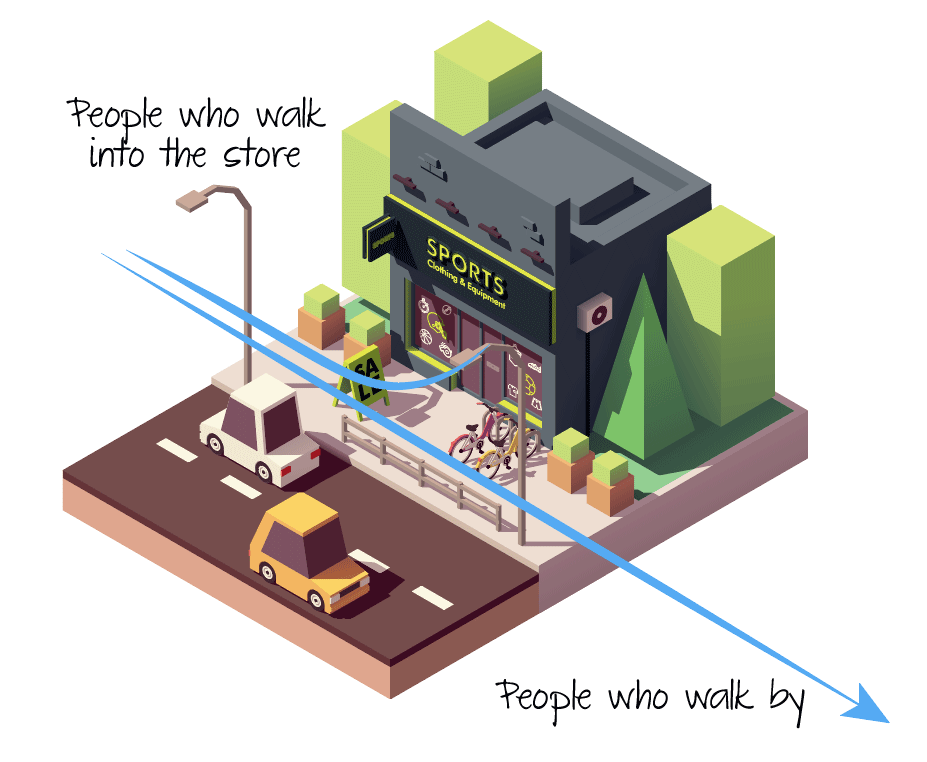 These three groups are not the same, and you should never include all of them in your metrics.

For instance, on Baekdal Plus, I segment this traffic into these three groups.

And so when I measure the attention span of my readers, I would never include that first segment (page init), because those people aren't doing anything. They are just random people who came across one of my articles without really knowing what it was.

They are not real traffic.

But finally, this also illustrates one of the key problems we have with news publishing in general. Newspapers have never produced individual news articles that people would really focus on.

In the past, this wasn't really a problem, because the package of news (aka the newspaper) provided that focus instead. People would sit down and flip through the newspaper, and while people only looked at each page for a very short period of time, it still made up a sustained moment.

Today, however, we don't see this anymore. While the attention time per article hasn't really changed, the sustained moment is now all over the place.

This is a problem, because it changes the way people see news. It becomes a snack, rather than a moment.

So, we need to do something about this. And we see this now with how many news publishers are turning to podcasts. These are all much longer, sustained news moments. We see it with things like the New York Times - The Daily, and with news startups like Zetland, Tortoise, or the Correspondent. And of course, YouTubers are very familiar with this, with most successful YouTubers focusing on 10+ minute videos.

But most traditional publishers still struggle with this, simply because you have never created articles like this before.

So think about this the next time someone talks about attention spans online. The problem is not with the public. They are just doing what they have always done. The problem is with what we give them, and how we give it to them ... but also, how we measure it.

The reality distortion field we put ourselves in, future of event trends, and Apple blocking open rates

Apple is blocking open rates for newsletters, while giving publishers full analytics for their own services.

What if virtual events weren't events at all?

Redefining the way we think about virtual events

How could we define journalism as a service?

What is the value of the press, and how can Facebook be responsible but not the press?

Churn after COVID will make it much harder to compete

First party data is critical to future success, and we need to block Google FLoC

A guide to listening to your audience, and let's talk about Google's no-cookies

Listening to your audience, Google's plans to remove the cookie and let browsers track instead, and media as fashion.

Did newspapers in the past control all advertising, and does that even matter?

Measuring trust is really easy. The hard part is to focus so that you create trust in the first place.

When should the media be paid?

When should content be paid for? Hint: It's not when publishers say.

A lesson in data reporting when reporting about COVID-19

Three examples of data journalism where we tend to get it wrong.

newsletter:
The reality distortion field we put ourselves in, future of event trends, and Apple blocking open rates

newsletter:
What if virtual events weren't events at all?

newsletter:
How could we define journalism as a service?

newsletter:
A guide to listening to your audience, and let's talk about Google's no-cookies