The market strategy for audio, and the problem with TV ratings

Welcome back to the Baekdal Plus newsletter, today we are going to talk about audio and ratings.

Plus: How audio is becoming the third great format for publishers

The market for audio is getting very interesting. Not because of any specific element of audio, but because of how the role of audio is growing.

The best way to describe this is to compare it to how video changed. In the old days, video was a separate format relegated to a separate market, namely TV. So, you would have newspapers as one market, and TV as an entirely different market.

But think about how we use video today. It's no longer a separate market, now it's mixed and matched into ... well ... everything. A newspaper or a magazine will now do video in the same way that they do text and images.

The same thing is happening to audio. In the past, it was also a separate market, namely radio. Then came podcasting, which is just the digital version of radio. But what we are seeing now is that audio is starting to mix into our other formats and becoming a more integrated, natural part of the mix.

This is super-exciting, and in my latest Plus article, I explain this change in much more detail.

Read more: How audio is becoming the third great format for publishers

In Sara Fischer's latest newsletter about media trends, she posted a very interesting graph for the audience figures of the final episode of the most popular TV shows. 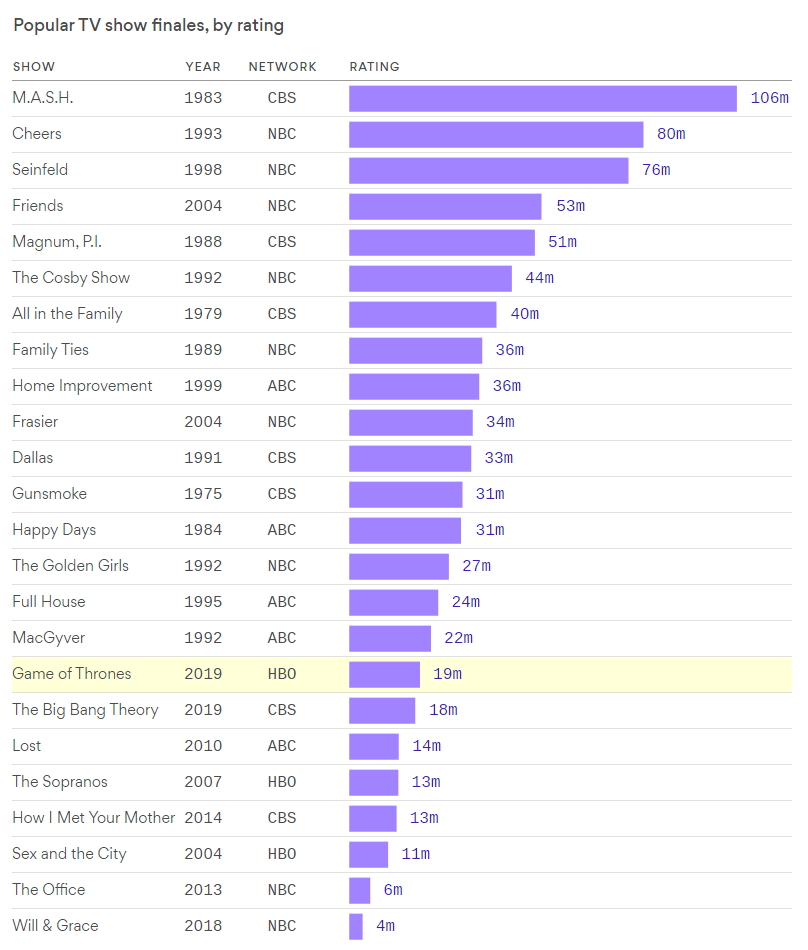 You will notice that Game of Thrones only reached 19 million, which might come as a surprise considering that my Twitter feed makes me believe that every single person on Earth was watching it.

But then look at M*A*S*H, Cheers or Seinfeld. Those numbers are insane! In 1983, when the final episode of M*A*S*H aired, there were only 84 million households in the US.

All of this comes down to some fascinating trends.

Live vs time-shifted: One reason that shows today don't reach the same numbers, is because people aren't necessarily watching the shows live anymore.

In general, each episode of Game of Thrones season 8 has reached about 44.2 million people (and will go up even more). This means that only about 40% of the audience watched it live.

This is a growing trend, and it's important to always keep in mind. Game of Thrones was special in that it became a very popular series, but if you look at less popular shows, the live to time-shifted rate goes up even higher.

Most people don't have HBO: Another big factor is that Game of Thrones was severely limited by the fact it was only available on a streaming channel, whereas shows like M*A*S*H or Seinfeld were on a channel that pretty much every single home had access to via their cable TV package.

Sadly, I don't have accurate numbers for this, but the point is that we need to think about this differently.

This is particularly important when we start talking about how big an impact this will have on HBO now that Game of Thrones is over. Nobody would ever consider cancelling their cable TV package just because M*A*S*H ended, but it might be a different story for HBO (although, please ignore the many articles journalists have written about how people are leaving because they have seen a few tweets about it).

We no longer have a common audience pattern: This is the final trend which has an impact on viewing figures. This is not just true for TV shows, it's true for everything.

In the past, if a brand advertised on TV, they had a pretty good idea of how many people they reached and how they reached them, because in every home, everyone was doing the same thing.

But in the digital world, we no longer have a shared pattern. You can see this in the graph above. The most watched shows are all very old, and part of the reason for that was because back then everyone would watch them, together, at the same time and in the same way.

This is not true anymore. Today our media patterns have become far more complex, and the real impact is not about how many people watched it that one evening, but what happened over time.

In other words, we need to move away from the old concept of TV ratings.