The problem with ad targeting, GDPR compliance, and who is in the streaming war?

Welcome back to the Baekdal Plus newsletter: In this edition, we are going to talk about a number of important things.

The problem with the way Twitter defines your interests

There are many problems with how the ad tech world works. There are problems around privacy, with how publishers often only get a tiny percentage of the revenue, with how the measurements are often fraudulent, but what about the profiling itself?

In the ad tech world, the promise they make is that, if you allow them to track you, you will get better and more personalized results. And, for brands, they promise that when you target your ads to specific keywords, you will reach people with that interest.

Both of these promises rely on the ad tech platforms being able to identify your interests in an accurate way. So, are they accurate? Heh... well, of course not. Every single time we have looked at this, the result is beyond terrible.

I wrote a much longer analysis of this, and why ad interests are often so bad, in my latest Plus article.

Read: "The scam that is ad profiling and targeting"

Only 11.8% of websites are compliant with GDPR

Speaking of things that are terrible, there is a new study out from Cornell University that looked at how websites (including most publishers) are using 'dark patterns' to get GDPR consent.

We scraped the designs of the five most popular CMPs on the top 10,000 websites in the UK. We found that dark patterns and implied consent are ubiquitous; only 11.8% meet the minimal requirements that we set based on European law. Second, we conducted a field experiment with 40 participants to investigate how the eight most common designs affect consent choices. We found that notification style (banner or barrier) has no effect; removing the opt-out button from the first page increases consent by 22-23 percentage points; and providing more granular controls on the first page decreases consent by 8-20 percentage points. This study provides an empirical basis for the necessary regulatory action to enforce the GDPR.

Dark web patterns, of course, are illegal. We all know this. The reason why is because of two very simple rules, as defined in GDPR.

Secondly, it must be just as easy and simple to decline giving consent as it is to give it. Meaning that if it only takes one click to "accept", then it must only take one click to "decline".

Let me give you an example. Here is the GDPR consent dialog for The Times. 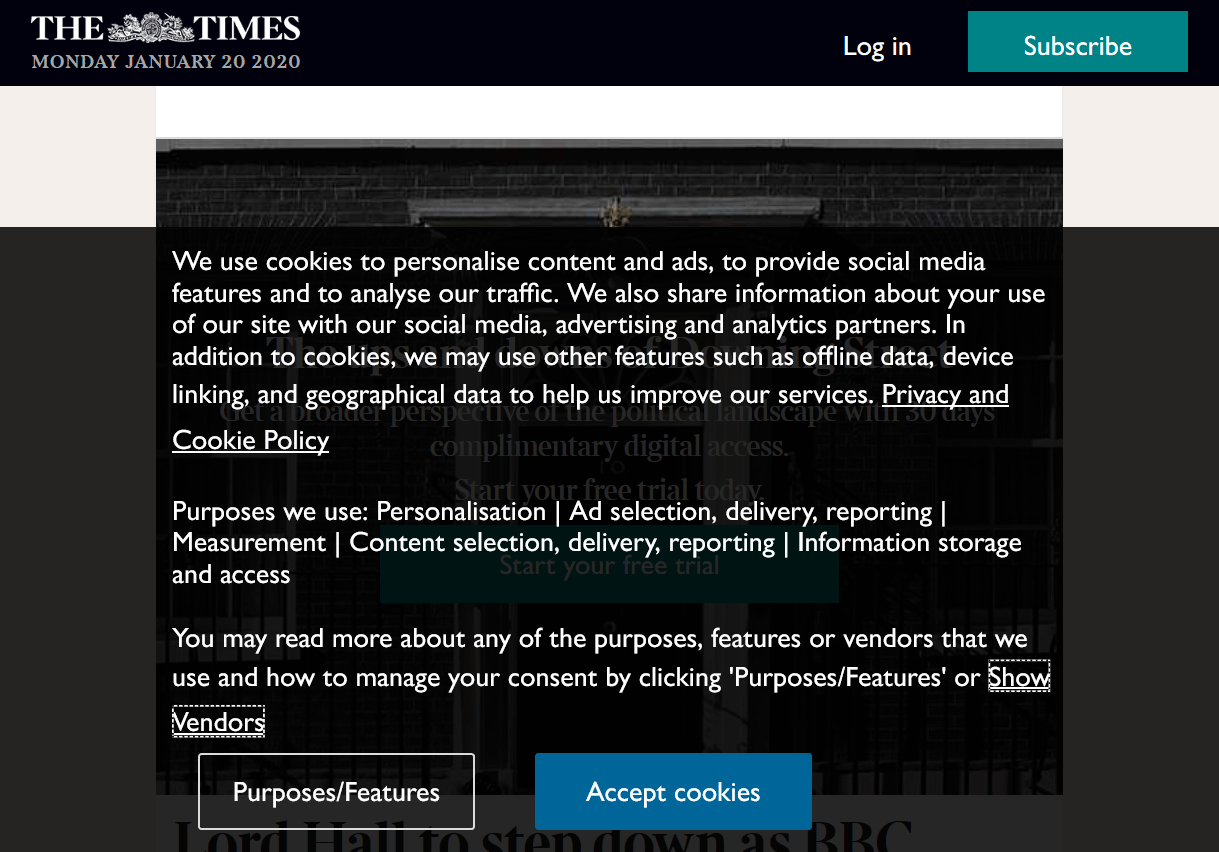 First of all, the way they have implemented this is so that if you do anything on the page, even just to scroll down a bit, the consent dialog 'auto-accepts'.

You can see this if you look at the network traffic. As soon as you scroll just a tiny bit, the consent dialog auto-closes, and a 'consent receipt' is sent to OneTrust indicating that people have now given their active consent.

This, of course, is a total lie, and it's an example of publishers using dark patterns to fake GDPR consent.

But there is also the other problem with not being able to decline. As you can see, they are offering two buttons. One that says "Accept Cookies" and another that says "Purposes/Features".

So in order to decline tracking, you have to click that other button, which brings you to this: 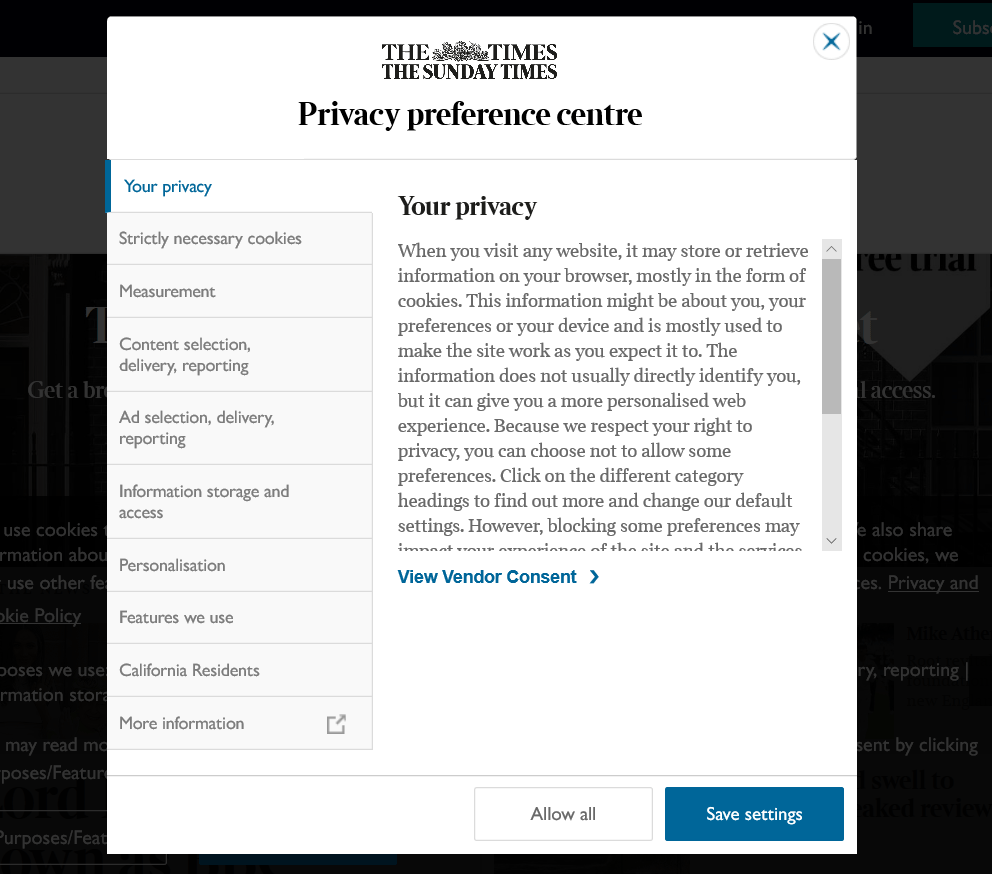 Here you have to figure out what the heck this all means, click through each of the settings to make sure everything is turned off, and then click 'Save settings'.

If you do not wish us or our third party partners to "sell" your personal information for the purposes set out in this Preference Centre, you can change your settings for each purpose by using the toggles provided in each section.

This, of course, is another dark pattern. This dialog is deliberately designed so that it is as difficult as possible to decline consent, requiring multiple clicks, very non-transparent wordings, and overly long information for everything.

This is illegal. It must be just as easy to decline as it is to accept.

But, The Times is nowhere near the worst publisher. Many publishers are engaged in even darker patterns, requiring many more clicks, or hiding the decline buttons by using colors that make them hard to see ... and some set the consent to 'on' even when you have turned it off.

Of course, the ad tech world itself is terrible too. Many ad tech platforms ignore the consent strings, tracking people even when they are not allowed to. This, of course, is also illegal.

But the reason this is even possible is because publishers are giving them the data regardless if they have consent or not.

For many publishers, the ad implementation is the same regardless of consent status. The difference is just that when they don't have consent, the consent string is set to false, telling the ad company to not use all the data that you gave them.

This is like telling a kid not to eat the candy that you just handed to them.

What is happening now?

The result of all this is that there is increasing pressure on governments around Europe to step up their enforcement.

And we hear similar stories from other European countries. In other words, the 'grace period' is coming to an end.

And so my advice to you as a media analyst is to fix this now. Don't wait until you get fined. Don't assume that the regulators will only go after the ad tech companies.

Publishers are currently engaging in the worst type of dark patterns on the web. It's only a matter of time before the regulators will come after you.

Stop engaging in dark web patterns, and don't wait to fix this.

Thinking about the streaming war

Finally, I just want to very quickly repeat something I wrote on Twitter.

Right now, the market for streaming is rapidly changing, and many services are launching. But, in the media industry, there seems to be a blind spot in that journalists are only looking at the more traditional services.

When you are covering the 'streaming wars', don't just look at Netflix, Disney+ etc. That is only a (small) part of the future of streaming. 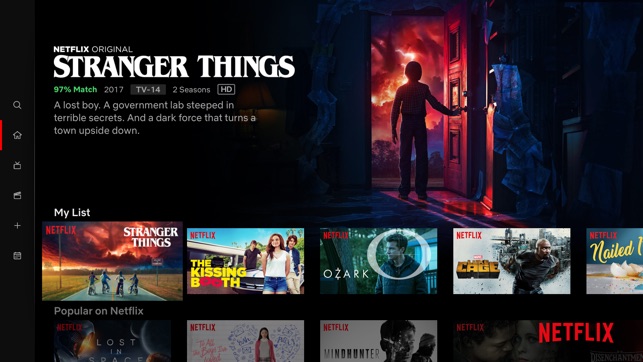 First, we have the TV streaming market, where people turn to streaming for the same reasons they used to watch cable TV. This market is defined by Hulu, Netflix, Amazon Prime, Disney+ ... as well as many regional offerings (depending on the country).

Secondly, we have the streaming moments market. This is where we see YouTube, Twitch, as well as many other 'streaming platforms' (and there are many, but everyone else is very small). This market is, in terms of volume, bigger than Netflix.

Finally, we have the streaming niches. Here we see companies like CuriosityStream, Motorsport TV, MasterClass, and things like Peloton (+ many more). These channels are defined by their niches. They will never compete with Netflix, but combined they make a big impact.

So, when you cover the streaming wars, only talking about the first market is not representative of the trend that we are seeing. Netflix's biggest competitor isn't other traditional streaming channels; it's how streaming itself is changing.

A good comparison is to think about it like newspapers. When newspapers shifted from print to digital, we didn't have a 'newspaper war' as digital newspapers emerged into this new market. The real shift came from all the other forms of publishing on the internet.