The problem with newspaper jobs, and how we get polls wrong

In today's newsletter I have three interesting things for you. I'm going to talk about some of the things that often cause misconceptions in the media.

The problem with newspaper jobs

I recently came across a tweet from Benedict Evans outlining the changes in the number of newspaper jobs in the US. 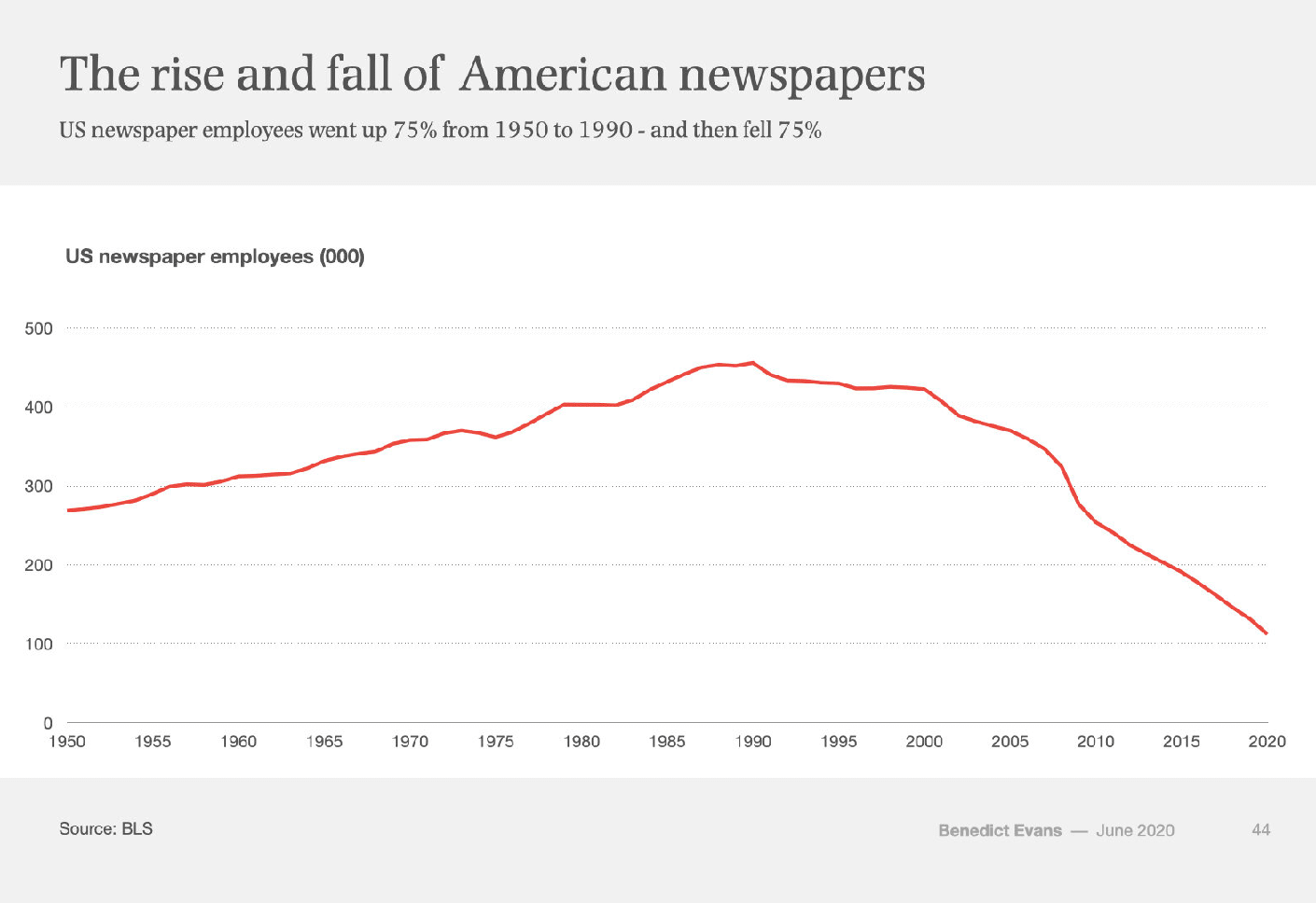 This reminds me of another graph I posted earlier, illustrating when newspaper circulation in the US started to drop. You can read more about this in "The Updated (and scary) Circulation and Revenue Figures for Newspapers(2018)". 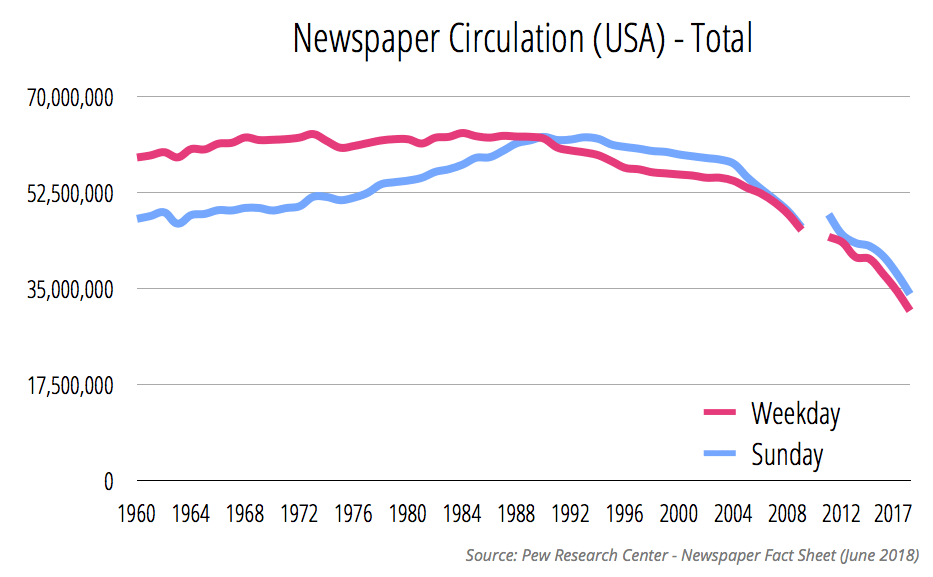 These graphs are interesting for a number of reasons. They tell us about the trajectory of the old newspaper industry, but they also show that this trajectory started much earlier than most people think.

When most people talk about the loss of newspaper jobs today, it usually becomes a question about tech companies. But notice how these graphs clearly illustrate that this started happening much earlier than that.

In fact, as I wrote in my previous article, if you instead measure circulation, as a percentage of households, you see that drop has been almost a straight line all the way back to the 1960s. 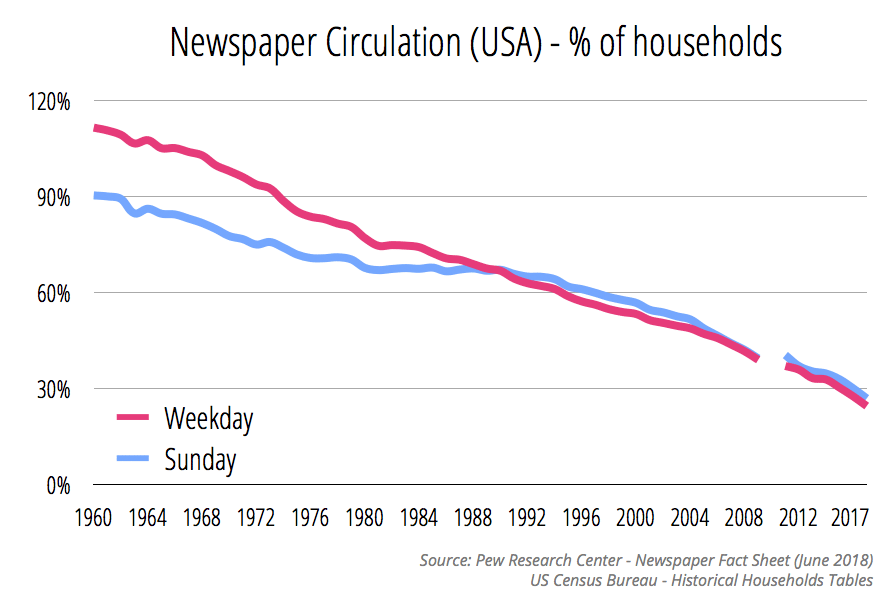 But talking about jobs again, what is also interesting is where these jobs go. Benedict Evans tried to visualize this by measuring the number of New York Times employees as a % of the total newspaper jobs. 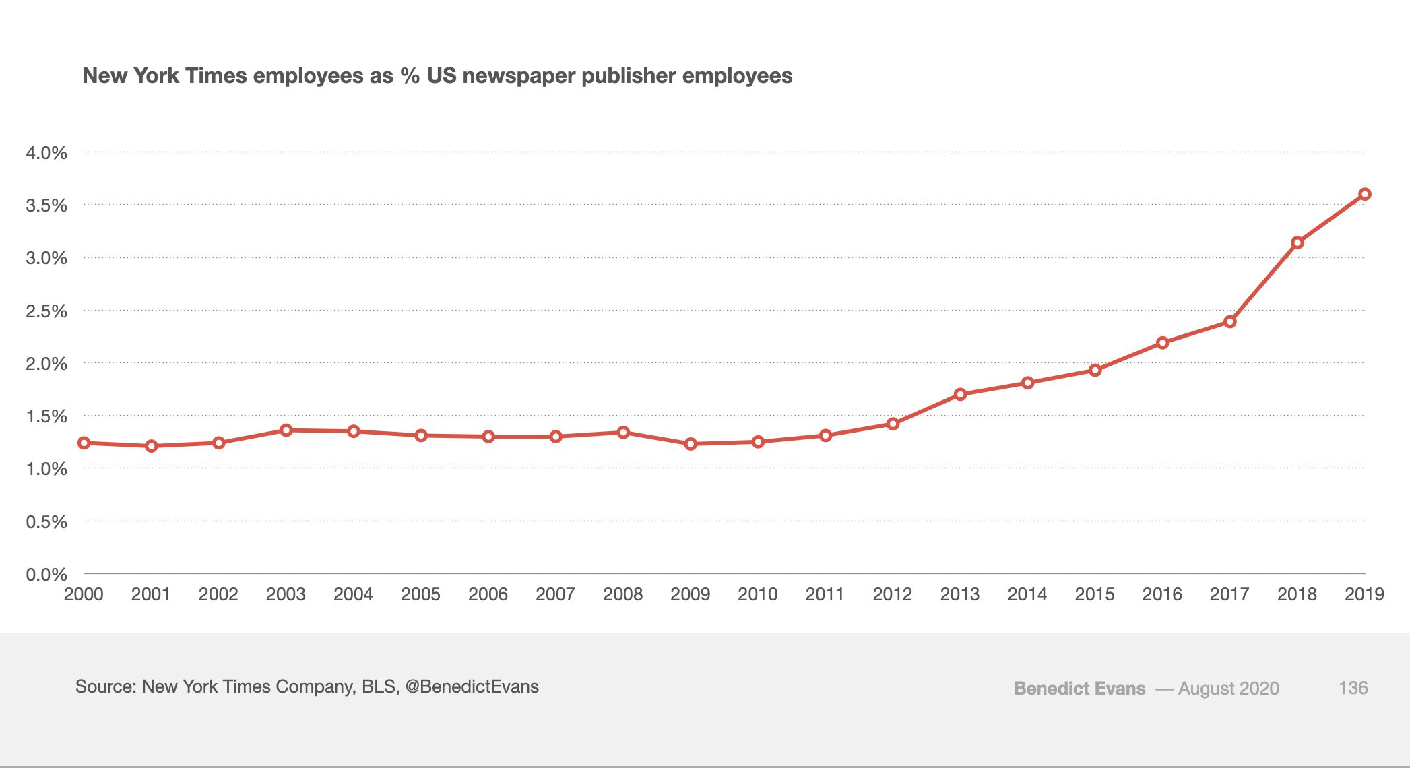 Here we can clearly see the 'winner take all' effect that so many people talk about. There are a few publishers who are doing really well, like the New York Times. But the rest of the industry is really struggling, and particularly so in the US.

However, there is a problem with all these graphs, they are not measuring the true scope of the media industry.

For instance, when Benedict Evans posted the above graph, one sharp-thinking individual asked him what he had actually included in this. He wrote:

The answer to this was "No". The above graph does not include any of the people working for new media companies. It only looks at the companies who traditionally called themselves newspapers (aka the companies who used to or still publish in print).

This makes his graph highly misleading, because they are no longer representing the actual number of people working within journalism. It only looks at the people who work for 'old' companies.

Let me give you an example.

Jellyfish is a sales channel for UK magazines, where you can buy all the latest issues from the old companies. You've got Women's Health, National Geographic, Good Housekeeping, GQ, and many others. And earlier this year, they published a story about how much sales intent had increased in the early months of COVID-19.

One example of this is the tech and gaming magazines, which look like this:

But again, this only tells us something about the old magazines. What about all the other publishers? For instance, take a company like Linus Media Group, home of Linus Tech Tips ($11.7 million subscribers) and many other channels.

It has 30+ employees, and a huge building with several studio spaces in which to produce their tech news. Because they are on YouTube, they are not included in this study.

And we see this so often with so many things. For instance, think about streaming. Most studies will look at Netflix, Hulu and other streaming channels, but not include Twitch.

Or look at TV ratings. It will count how many people watch something on TV (in a linear fashion), but will not include all the people who watch it over the internet, either live or on-demand ... even though many use their TV for that as well.

This is a growing problem. As the new world of media becomes ever more dominant, all these studies only looking at old media no longer represent what our world is like.

And, as a result, we don't know how many people currently work in the media.

We can solve the news deserts

Speaking of media jobs, one thing that many people have talked about over recent years is the increasing problem with news deserts (particularly in the US, but it's also happening elsewhere).

A news desert is what we call local cities or municipalities where there is no longer any local newspaper.

As a media analyst, I have really mixed feelings about this. On one hand, I think it's terrible that so many local newspapers have closed, but on the other hand, I'm also seeing an incredibly exciting trend related to independent journalists starting their own local publications.

Let me give an example of this.

After the shooting in Kenosha, the local newspaper Kenosha News published an article that misrepresented what the Black Lives Matter protests were doing. And of their journalists, Daniel Thompson got so upset about this that he resigned.

Following this, a GoFundMe page appeared, saying this:

Since I resigned from the Kenosha News , many people have asked what I plan on doing next.

That said, I'm asking (and feel like an ass asking) for some assistance during this time to the tune of $5,000. I figure that's what I need to have two months free to develop and launch new projects while being able to cover my bills, pay for medications, etc.

So if you want to invest in me, my journalism skills and you want a better news source in Kenosha, please donate.

I want to continue to serve the community. And this is how I do it best.

As I am writing this newsletter, he has raised $45,000 ... or more than his previous full-year salary. And he could have raised even more but has chosen the end the funding campaign.

And he is not alone. Over the past several years, we have seen so many examples of independent journalists starting something on their own. Either as a full-on newspaper, as a podcast, or as a newsletter (here is a list of just a few).

It shows us that we don't really have a problem with news deserts. Local communities want news, but they want it from journalists who are not just doing things the old way.

They don't want a package of random content designed for the 1980s, they want the journalism itself. And this is what these people are doing.

So, I feel sad about all the companies who have been forced to close. But I'm not worried about news deserts or the role of local news. We are seeing the beginning of a wonderful new future for journalism.

How we are using polls the wrong way

Finally, we need to discuss election polls. This is a topic that comes up every election, and the way we use polls tend to harm people's trust in news.

In my latest Plus report, I talk about this at length, by giving you a media analyst's view on polls and how using polls as part of the news coverage impacts how people think about the value of journalism.

I'm looking at two different elections. The 2016 Brexit Referendum and the 2016 US Presidential Election (+ some for 2020). And I illustrate how much the data fluctuates over time, compared to how we covered it.

So take a look at: How we are using polls the wrong way.

Speaking of covering elections. Last year, I recorded a podcast episode where I talked about how I would cover an election if I was running a newspaper.

It's a hybrid article, so you can choose either to listen to it or just to read it, but it's a good reminder related to the article above about polls.

Listen to it here: Episode 010: Covering the Elections From the Perspective of a Media Analyst