Plus: How Small Publishers Should Think About Advanced Analytics

One of the truly exciting things that is happening right now is how publishers are starting to realize the power of advanced analytics.

For instance, Norwegian publishers Schibsted have been using learning analytics and a mini form of machine learning to improve subscription rates. The Wall Street Journal is now looking at 60 different signals to create a dynamic paywall that adjusts to each person's consumption pattern. The Financial Times has come up with an RFV score (Recency, Frequency, and Volume) that they use to segment their audience.

These are all great examples, but they are also very big publishers with large audiences. What if you are not a big publisher? Do you need 60 signals to do analytics? Do you need to have a complicated scoring system in place?

In short, no. But, you do need to approach your analytics in a different way than what you are used to today. I'll tell you how in this Plus article.

Plus: Completely Rethinking the Advertising Model for the Post GDPR World

The future of advertising is both exciting and extremely problematic. Advertising spending is shifting to non-news interactions.

This is a very important shift for publishers to understand, because it forces us to completely rethink how we approach advertising.

On top of this we also have the problem with GDPR, and publishers don't seem to realize just how much trouble they are in. In this Plus article, we are going to look at both issues.

Facebook has finally tried to do something about advertising transparency, and it's quite interesting... although it doesn't really solve anything, and it's not necessarily a trend.

First of all, as you may already know, you can now go to any Facebook page and see exactly what ads that page is running in any country at that moment.

That's kind of fascinating, and as an analyst this is like getting a bag of candy.

Of course, you can see it for any page. For instance, I tried looking at the fashion company I worked for 15 years ago, and their Facebook ad strategy is merely to promote their Facebook page, without mentioning any products or any new thing they are doing. 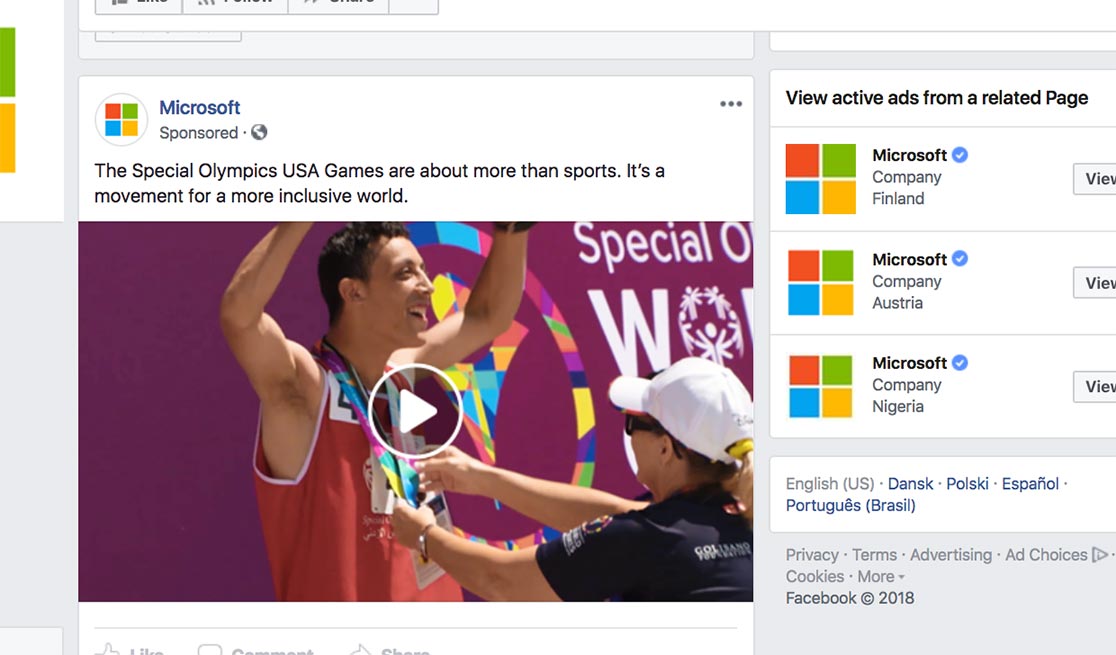 You can also very clearly see some problematic cultures within different companies. Old traditional companies have a tendency to either not advertise at all on Facebook, or just create meaningless ads that aren't really targeted that well, or have any useful call-to-action. More modern companies advertise the same way they are engaging with people in any other social setting.

It's all very fascinating.

However, it's also not without its flaws.

For one thing, brands generally hate it, because it reveals information that used to be confidential. Journalists will immediately start to think about this as a potential scandal, because why would brands try to hide something? And how can an ad be confidential?

But that's not the issue here.

And if you go to a page like Tetley, the ads you find are just ads. 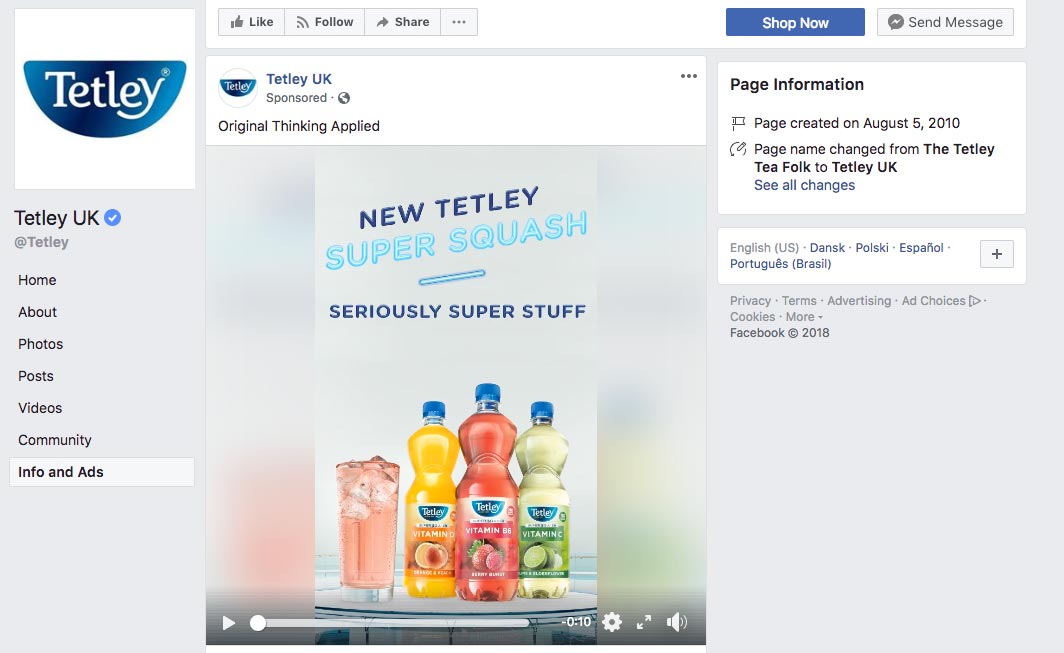 Similarly, the ad itself isn't a secret because... well... it's an ad.

So, brands are not happy about this, and they feel they are being punished by something they had nothing to do with.

The reason Facebook has now created this level of transparency is because of political advertising, where trying to hide what you are really doing is something many political ads do.

So, we have this disconnect.

Another flaw is what Facebook actually reveals, which isn't really anything. It looks fascinating, but Facebook will only show you ads that have been targeted to a specific country and only the ads that are running right now. It doesn't show the much more vital information about who is being targeted, and you can't see any of the ads that have expired.

From a journalistic perspective, this is kind of useless, because what's important to uncover is political ad corruption, which you can only do by comparing advertising over time, and you would have to manually discover and check in on every single page, every day, to be able to build up a bigger picture.

For instance, if you go back to the last election, it took weeks, if not months, before we managed to uncover what was really happening, but if we wait that long, the ads are no longer shown.

In other words, this whole thing is not really giving us the transparency that we need.

This leads me to my final point, which is whether what Facebook is now doing represents a larger trend. Will ad transparency become the new norm? Not just on Facebook, but on every channel?

The answer to this, from my perspective, is that I'm not sure it will.

One thing that is very important to remember is that the problem with political advertising represents such a tiny part of the overall advertising market. Most ads are just brands promoting a product.

So while journalists are very heavily focused on the problem of political advertising to the point where some seem to think there is nothing else on Facebook, the actual advertising market is nothing like this.

And as soon as you move outside the journalistic bubble of politics, you will find that there is no trend or even a call for transparency. In fact, outside the political/media world, the concept of highly targeted advertising is considered to be a good thing.

It means that a company like Adidas can advertise their running shoes to runners and their football shoes to footballers, or that your local knitting store can reach only those interested in knitting.

So, there is a complete disconnect between the way journalists look at advertising because they are so close to the political focus, and the way the rest of the world sees it. Transparency tools like what we now see from Facebook really only apply to the former, whereas it doesn't improve anything for the latter.

And the latter part is, in terms of volume, many times higher. Even in a country like the US where political advertising is just crazy, the total political digital ad spend is only about 1%-2% of the total market... even during an election year.

Mind you, I'm not saying that political advertising transparency isn't important. Of course it is. It's vitally important. I'm just saying that from a trend perspective, it represents such a tiny part of the market that, when you look outside the world of journalism and politics, the actual trends look very different.

So, ad transparency is fascinating. But it's also kind of a niche issue. It will be interesting to see what all the other ad networks do over the next 6 months.