Welcome back to another edition of the Baekdal Plus newsletter.

Today, I have three things for you. The first is just related to magazines, but the last two relate to problems in the media that we need to fix.

Launching a new magazine? What even is a magazine?

Whenever I hear about someone wanting to create a new magazine (regardless of format), I'm struck with the fact that most publishers go into a project like this with a very traditional mindset.

This is true even when publishers want to do something new. They pick an approach that is no different to the old models.

So, in my latest Plus article, I summarize all the big trends and factors that get in the way of people thinking about publishing magazines in a new way. As well as explaining what these are, I show you how you should think about them instead.

So, take a look at: Launching a new magazine? What even is a magazine?

One of the things that we really struggle with at the moment in the media world is all the bad actors in our industry.

Don't get me wrong, we all love the media industry. We all think that journalism is incredibly important, and none of us wants to harm it. But the problem is that every single day, a number of things happen in the industry that just ruin all of the good stuff.

I was reminded of this recently after the latest hate crime/terror attack in Germany. Like so many times before, the attacker had recorded and live-streamed video of himself and uploaded it to the social channels.

The result was that we in the media industry called for the social channels to do more, but while all this was happening, several newspapers decided to include clips or screenshots in their own articles.

In other words, while we were demanding that social channels should do more to take the videos down, we, the media, were putting them up.

This is a really big problem, and we see this duplicity across so many areas. Not only does it make us look like idiots, it also makes us look like we can't live up to our own responsibilities. Worst of all, it causes a tremendous level of damage to the public.

So I wrote more about this, and a potential fix in: "Black hat and white hat publishers". Please take a look at it, because this is a discussion that we need to have!

A few days ago, I came across a video on YouTube talking about Bonzi Buddy, and all the problems with it in the form of spyware.

In case you can't remember this thing, Bonzi Buddy was launched back in 1999, and it quickly became the focus of a scandal because it included spyware.

Spyware in this case meant that, as part of the app, it would also track people and send that data back over the internet, and this and other shady activities caused Bonzi to face a consumer backlash and several lawsuits.

You can see the video here:

But what is amazing about this is that all the things described are now things that have become incredibly common, even to the extent that it's built into our operating systems.

For instance, in both Windows 10 and Apple's IOS, there is a built-in feature, allowing apps access to the OS built-in advertising ID. Granted, you can turn it off, but in the late 1990s, this would have been defined as spyware.

And then, of course, we have the web itself. Look at what every publisher is doing. Every site often has hundreds of outside trackers ... which again would have been defined as spyware in the late-1990s.

Every single website is now doing what Bonzi did... and far more.

But as we all know there is now a fast-growing trend to bring things back under control. All across the world, people have had enough of all this spyware. They don't want every action tracked and exchanged as a form of commodity.

In Europe, we have GDPR, but the same is now happening in the US. Just recently I saw a tweet from Walt Mossberg, a former, very respected tech journalist.

I fully understand the revenue squeeze on news organizations. That's why I subscribe to more than 15, including local ones. But I also use an ad blocker, since online ads are spyware, loaded with trackers. So, when I see a screen like this, from a pub I use rarely, I go away. 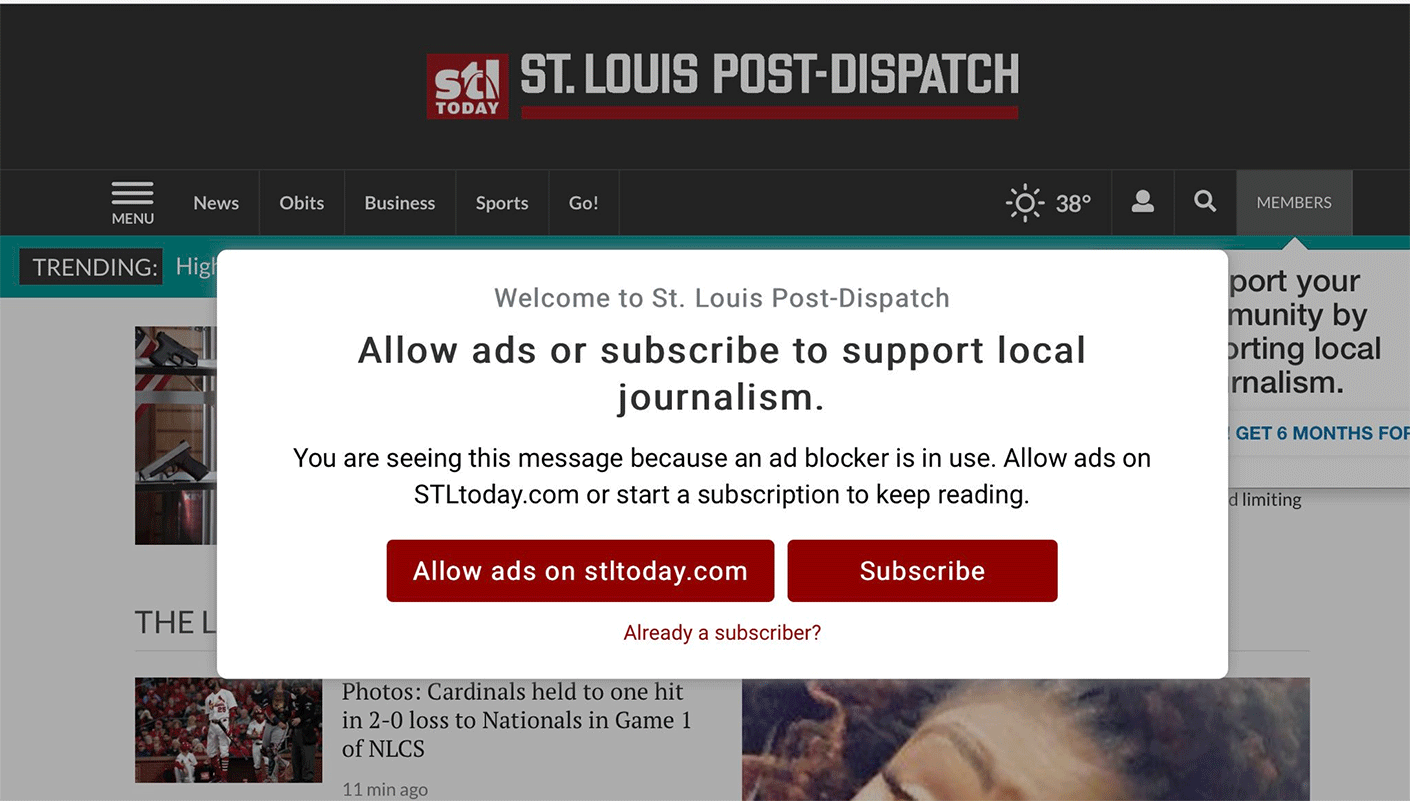 IMO, publishers need to band together somehow to either refuse to allow tracking in the ads they run, or offer a subscription bundle. I know either option will be very hard, maybe impossible. I'd gladly view ads that were just ads. Either that, or offer a few free stories.

Walt is completely right about this. Obviously, most people aren't as generous as Walt by subscribing to 15 newspapers, but the use of an ad blocker is no longer seen as blocking ads, but about blocking trackers.

For instance, when I came across this message on the Washington Post, I responded by saying this: 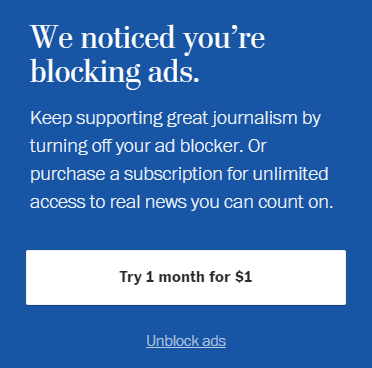 No WaPo, I'm not blocking ads. I'm blocking trackers. I have no problem with you showing me ads, but I will not have US data brokers track and sell the metadata they collect in relation to what political stories I read.

This shift in mentality is particularly important to notice after the Cambridge Analytica scandal. The idea that any ad tech company, anywhere, would have any information about what political stories I read is simply unacceptable.

And since newspapers write mostly political stories, by sending this data to ad trackers, as newspapers you are doing just that. The ad tracking data used by political parties today are most likely using data originally sent to them from newspapers.

It's even worse when it comes to health information. I currently have some problems with food allergies (which is common in my family), and as such I have been looking for information about them.

But, on most health sites, I'm greeted with this: 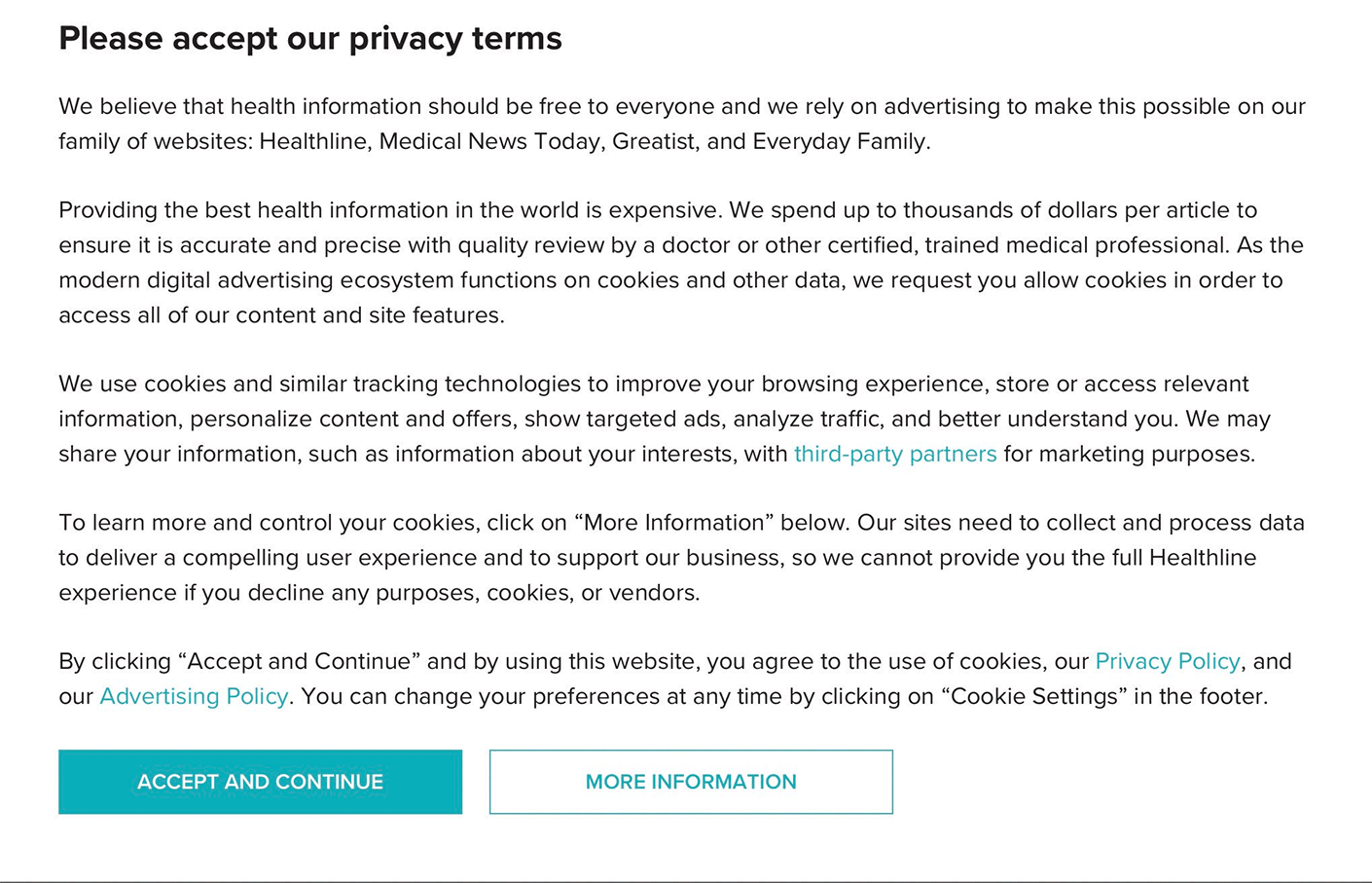 This is just completely unacceptable. This health publisher is saying that, in order to use their site, I must agree to share information about my health interests with third party partners for marketing purposes.

NO! There is absolutely no way I will allow a site focusing on health and medical info to share what I'm looking for with third party data tracking sites.

This is something we need to fix. But, right now, I'm not seeing any publisher moving towards doing that. Instead, I often see the opposite. I see publishers build up their own programmatic networks, using the exact same spyware tactics as the rest of the ad tech industry. I see media executives at conferences, talking about the need to do even more tracking. And I see publishers talk about how they need to introduce no-cookie tracking to circumvent GDPR and be able to track people regardless.

The reason I press on so strongly about this is because of the privacy trends that we now see. The path the publishing industry is on right now is causing a tremendous level of damage to us and our future.

Every single time you tell people to "remove your ad blockers so that we can send data to 3rd parties", you are basically giving your readers the finger. And when a publisher is confronted by this, most just put up their arms saying: "It's not our fault, it's the ad techs' fault".

It's true that this problem was invented by the ad tech industry, but that doesn't mean we can just shy away from our own responsibility. As a publisher, your first and foremost responsibility is to your readers. They are your customers and your audience.

So as Walt said, we need to fix this:

"Publishers need to band together somehow to either refuse to allow tracking in the ads they run, or offer a subscription bundle".

Obviously, there are other options besides the two Walt mentioned here. But the point is that we as publishers need to act now.

We need to invent a new ad model. One that doesn't rely on spyware to work. In fact, as a media analyst, I consider this to be one of the key things currently harming the media industry the most (along with the other problems mentioned in the article above).

The ad tech world is not going to fix this for us. In fact, they are now all trying to come up with new ways to make it worse. Nor will politicians fix it. I mean, they have already tried with GDPR and the new privacy laws we see in some states in the US. But if you have seen how publishers have reacted to that, it's clear that we are the ones who need to change.

So, let's start doing this.