Thinking about the Trust Project and smarter analytics

Welcome to March. In this edition of the Baekdal Plus newsletter, I have two things for you. The first is a look at what happens to your analytics when you switch from an advertising model to a subscription model. And secondly, let's talk about trust and The Trust Project.

In this week's Plus report, we are going to look at a really exciting aspect of analytics, which is how everything changes once you switch from an advertising mindset to subscriptions.

We all know how publishers monetized by advertising measure things. They look at whatever metric can give them the largest number to share with (and sell to) brands. So, they measure views in the form of pageviews, and ad views, using IABs pathetically low standard.

We also know that this is basically fraud. Anyone who claims that they have X amount of pageviews or that X millions of ads were seen is ...well ...lying. But since everyone is doing this, it keeps going.

When publishers change their focus to be monetized by subscriptions, they also dramatically change their analytics focus. Now instead of looking for the largest number, they focus on the most valuable number.

In my Plus report, I go into the details, looking at how big a difference this makes, using the example of a podcast to illustrate it.

One of the really positive trends that we see around media is how publishers are increasingly starting to focus on trust. Obviously, we still have a very long way to go, and every day I see examples of newspapers who just can't stop themselves from doing something untrustworthy in the quest to further their short-term traffic goals.

For instance, on the day I wrote this, one of the largest news sites in my country was running a front page story about how Android TVs were exposing people's private pictures to others. So were they?

No. No private pictures were shown to others. In fact, the people who discovered this problem couldn't even see their own photos. But they could see a list of accounts of anyone else who had used the same default settings to set up their TV.

This is just a simple example, but I see problems like this every single day, and it's a cultural problem within the industry that has a very serious long-term impact on trust.

The second problem I come across is that many people in the media don't feel responsible when they report something that turns out to be misleading. Instead, they will point fingers at others; their sources, other parts of their organization, or even other newspapers that are doing the same.

And, again, this completely destroys the concept of trust, because trust is not just about what we do, it's also about the feeling that people have when they see us assume responsibility for the value we give to our readers.

I also wrote about this recently in relation to my Twitter rant about the state of GDPR consent dialogs. And I ended it with this:

So if you ask me how to make your publication better, I would say: 'Respect your audience' ... I mean, this should be the number one thing. Respect their time, their privacy, and the trust between you. Without this, you have nothing to work with.

The problem that I often see is that many people in the media industry don't feel that this is their job. They just feel that they are 'reporting things', and I even hear journalists say that it's the public's job to respect and trust us.

The public should not have any reason to trust or respect us unless we give them one. And as long as newspapers keep adding misleading headlines (which are also used for their tweets), or turning a scandal into more than it is, we end up getting the trust that we deserve ... none at all.

I keep pushing for this, because we can't do any of the more advanced things about trust until this very basic problem is solved. If people can't trust something as basic as the headlines, how can they trust anything else?

But, as I said, there are also very good things happening around trust. For one thing, publishers are increasingly focusing on explaining their process and just generally becoming more transparent about how a story is made.

I want to give you a very good example of this:

This is brilliant because it combines all the different factors that we must convey to our audiences. They talk about how they research things, how they make sure it's relevant, how it is fact-checked before and after they write the script, how they separate opinion from conclusions, and how they credit and list their sources.

But what really impressed me is also how they are focusing on the responsibility of what they do, and how they will take down videos that don't live up to it.

I want you to take the time to watch this video. It's brilliant!

This is the same thing we now see with projects like The Trust Project - News With Integrity, which I'm sure many of you have already heard about.

The Trust Project aims to help publishers be more trustworthy by implementing a number of trust indicators, a set of standardized disclosures, that can help tell the public and tech platforms about the trustworthiness of the articles.

Eventually, these indicators will span across 37 factors, but for now it's based on just 8. Things like who made it, the expertise behind it, a clear distinction between opinion, analysis, reporting, and advertising, citing of sources, specifying methods used, whether it was locally or directly sourced, as well as concepts like diversity.

All great things. And the idea is, as seen in this mockup, to have a trust mark that readers can click on to learn more, as well as a "behind the stories" footnote at the end of each article.

However, there is one very important catch, which is that we know that the public won't see it. 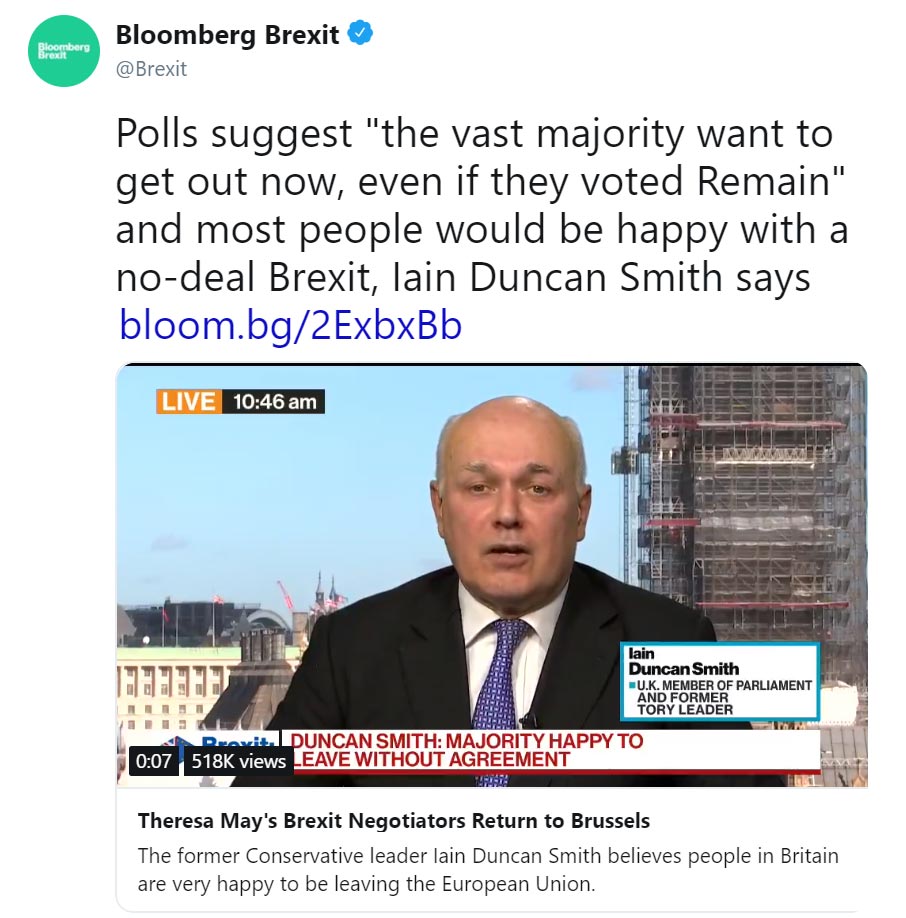 We now know that most people are only going to read this tweet, and that only a very small percentage is ever going to watch the video or click on the link to the article.

We also know that, of all the people who do click on the link, most of them are just going to read the start of the article, with only a much smaller group reading that article all the way to the end.

We can't be transparent about trust at the end. We have to do it from the very start.

And in this case, it's even worse, because the tweet is massively misleading. The polls do not suggest this at all. So, Bloomberg makes two extremely bad mistakes here.

First, they published something in a very untrustworthy way. And secondly, by just reporting what someone else said, they refused to take responsibility for the impact of their tweet.

The outcome of this is that many people ended up being misinformed, and Bloomberg lost a lot of trust that day. But after being called out about it, they did try to correct it.

Five hours after the original tweet, at 5:13 PM, they posted a follow-up that said this: 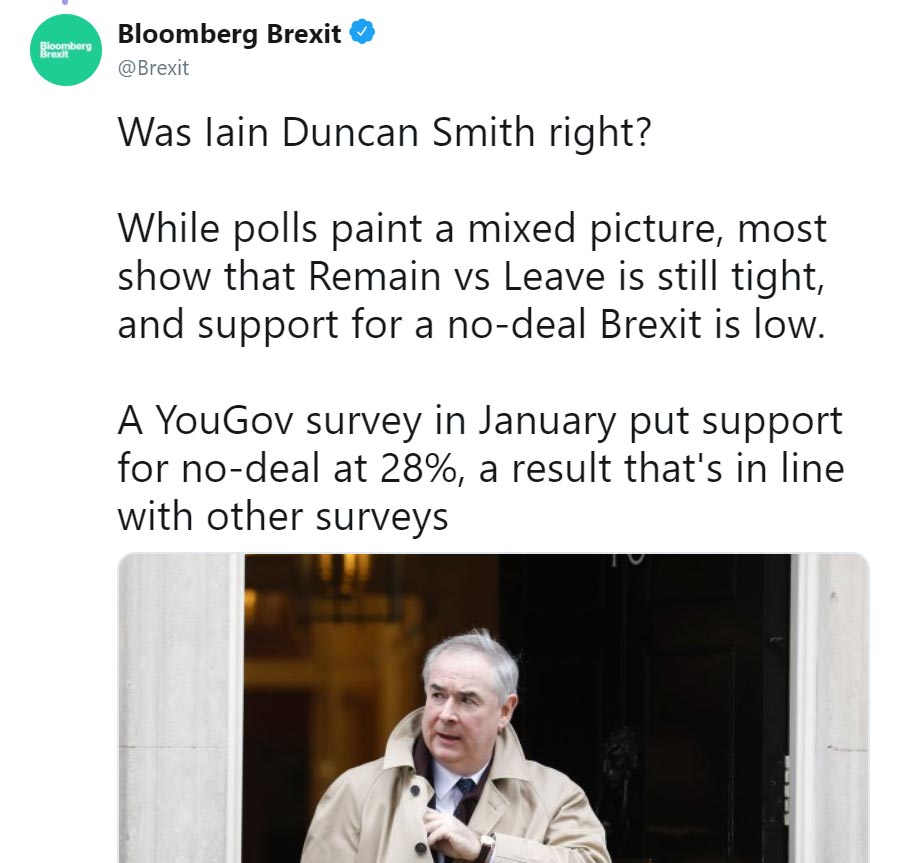 It's great that Bloomberg tried to correct their mistake, but now we have another problem in that most of the people who saw the first tweet are not going to see the second tweet five hours later.

The damage is still done.

So, while I absolutely love concepts like The Trust Project and also the video from Kurzgesagt, none of those things will ever make any difference until we, as publishers, start to think differently about how we publish things.

We have to place the trust upfront. We cannot just report things and then fact-check it later, we cannot put the trust indicators at the end of an article, and we need be trustworthy consistently and in a transparent way with absolutely everything we do.

newsletter:
How do we publish news to young people? And let's talk about abortion privacy