Why just one newspaper; Twitter Trends not trending, and what about change?

For those of you who have been on vacation, welcome back to reality. I took a short break as well, but now we are back and ready for the mad rush that is autumn (at least here in Europe).

In this newsletter, we are going to talk about three very interesting things.

A while back, Reuter's Institute came out with a really good study about news consumption and behavior, and one thing they looked at was how many newspapers people were willing to pay for ... and the answer was overwhelmingly just one.

This has sparked a number of conversations between media people, but there is actually nothing surprising about it. What we see here is what I call the supermarket effect, and in my latest Plus report I go into the details of why this is. Not only that, I also talk at length about what publishers should do to not get stuck with that model.

So, read: "Why people only subscribe to one newspaper".

One of the fundamental problems of the internet is that we don't understand its scale. This has a very unfortunate effect on journalism where we often bring stories about something a journalist found online thinking that it is a really big deal when it's nothing at all.

The problem here is about perception of scale.

BTW: Here is an interesting video from a non-journalistic photographer encountering this in Puerto Rico. 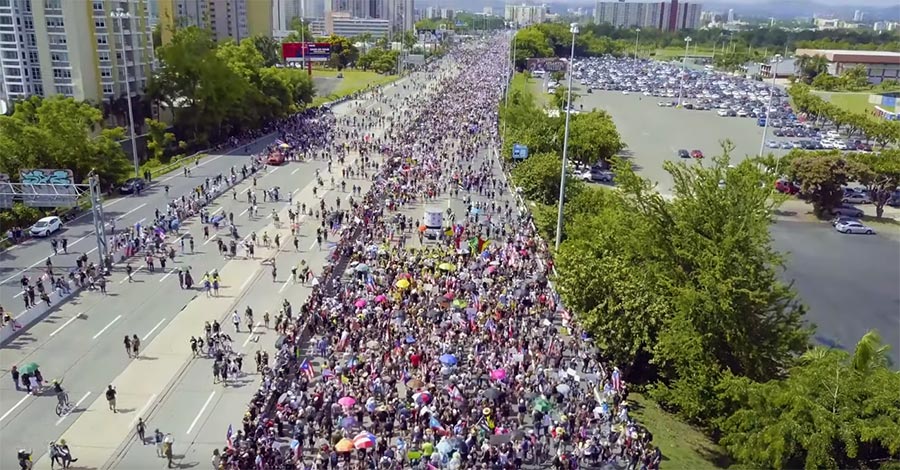 Mind you, this doesn't mean we always do it right. For instance, we have seen countless examples of journalists covering very small right-wing protests, making them out to be far bigger than they really are.

But, fundamentally, in the physical world, we can generally see when something is important or not.

The problem is that this doesn't translate well to the digital world.

Every single week I come across stories by journalists who have found something online, looked at the view numbers, and concluded that this was a massive problem. And when you confront the journalists who write this, they almost always truly believe that this topic is huge because of the numbers they see.

Let me give you an example. Let's look at Twitter Trending Topics.

If you are following me on Twitter, you might have noticed that I tweeted about how Twitter Trending Topics compares to the total. For instance, I tweeted this picture where I added the percentage of users who actually tweeted about this. 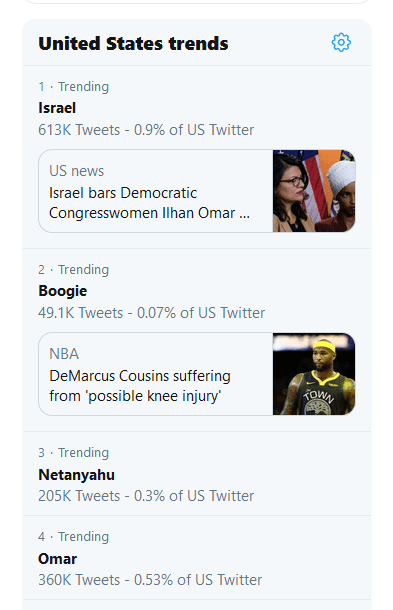 As you can see, on this specific day, Israel had blocked two US congresswomen from entering their country (after Trump asked them to), and it generated 613,000 tweets.

Is that a lot? Well, it certainly was a big story, but when you compare it to the number of Twitter users, it means that only 0.9% of US Twitter was talking about this.

Obviously, there are also many other ways you can measure this. What I did here was to compare it to the number of monthly active users in the US. If we instead compare it to the total number of daily tweets, the result is that only 0.1% of the tweets that day were about this.

We see this problem even more when we look at the 2nd trending topic, which is about an NBA player having a knee injury. It has 49,100 tweets.

So we look at Twitter Trending Topics, and we think these things are big events that capture the public's attention and our shared awareness.

In reality, though, they are nothing. 99.93% of Twitter did not tweet about this that day. What you are seeing here are extremely isolated bubbles of activity that in no way represent anything in the larger sense of things.

Again, it's the same when you see something on every other channel. Scale in the digital world is very different from the physical world. If you see a video on YouTube with 100,000 views, that video will have had zero impact of any kind.

In fact, as soon as we start to report about it, our reporting will immediately have a much bigger impact than anything the video itself ever had. And sometimes this impact is detrimental (even when we highlight bad things).

A simple example of this happened here in Denmark during the last election. One of the extreme right-wing personalities ran for election, and he had used YouTube to drive up his 'fame'.

However, it wasn't until we in the media started writing about him that his fame actually took off.

I can illustrate this with a fancy graph. In Denmark, before you can run for election, you need to gain a number of signatures of support. Here in Denmark, this number is set to 1/175 of the total votes during the last election, which is about 20,000 signatures.

So here is the number of signatures this person gained leading up to the election. 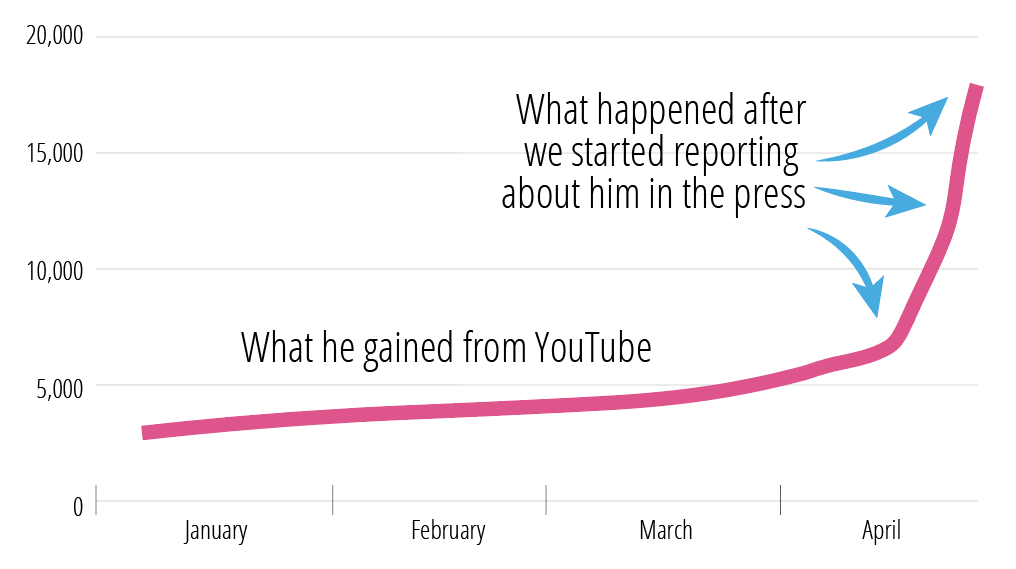 As you can see, something weird happened. At the beginning his only fame came via his YouTube channel, and it was pretty clear that this wasn't really doing anything. So, in April he staged a number of offensive events in the hope of getting the press to talk about him ... and it worked.

As soon as we in the press started covering him (often negatively), his level of support went up at quite an astonishing rate. And he eventually ended up getting all the support he needed (although he wasn't elected - luckily).

But this illustrates two problems.

First of all, many journalists attributed his 'success' to his YouTube channel. They wrote that it was because of the radicalization on YouTube that he was getting so famous.

But look at the data. YouTube did not do this at all. In fact, in terms of getting enough support, his YouTube channel was a failure. He was only able to convince a tiny group of people.

And this illustrates the problem with 'views' on digital channels. As journalists we look at this, and we see that someone has 100,000 views, and we think this means something really big.

In reality, it means nothing. In fact, anyone who has ever run an ad campaign online will tell you that 100,000 views means quite literally nothing.

In this case, it was our exposure, our critical reporting, our fact-checking that actually helped him reach his 20,000 signatures. If we hadn't done that, nothing would have happened ... because he wasn't famous at all.

This is what we need to understand in the press.

When you hear about something online, when you see a trending topic on Twitter, or a video on YouTube with a ton of views... in almost every case, they are not actually big at all. But by reporting about it (even negatively), you make it big.

This is a problem.

So how many views do you need to influence someone online? Well, there is no real answer to this. The problem is that we are looking at the wrong metric.

People watching Fox News are getting a far more persistent message about immigrants than people randomly stumbling upon a post on Facebook. So Fox News has a much bigger influence, even if the view numbers per post are higher on Facebook.

Or to take the example from Denmark. I counted the number of articles that just one of the largest newspapers had written where they mentioned this right-wing person by name leading up to the election.

That number was 161 articles over a one and a half month period.

That's insane! ... but also, that's persistence in the extreme.

And this is why the graph above looks the way it does. It's not about the views. It's about how we in the media bombarded the public with mentions of this person every single day.

It was the persistence that caused this to happen.

Mind you, again, this is nothing new. We know this from the ad world. If you are a brand and you want to sell a product via advertising, putting up a single ad that gets a million views will not help you sell anything.

To actually sell something, you need to influence people with multiple ads, persistently, over time.

And this is the problem we have when we try to understand exposure online. All we see are the views (the exposure), but we have no idea about the persistence behind it.

So, as a journalist, look for persistence, rather than views. And be very careful about the type of persistence that you create yourself.

The challenge of getting people to change

To end this newsletter, I wanted to mention a very quick thing I came across recently which perfectly explains how to change people.

I came across a post from Seth Godin, where he simply wrote this:

Humans are unique in their ability to willingly change. We can change our attitude, our appearance and our skillset.

But only when we want to.

The hard part, then, isn't the changing it.

It's the wanting it.

If we want to make any difference, this is where we need to start. We need to make people want to change first.

Anyway, remember to check out: "Why people only subscribe to one newspaper"

Advertising during a war ... it's complicated

In today's hyper-connected world, the role of the press is to verify more than it is to report.

We are very far away from the subscription limit

Many people say that we have reached a subscription limit, but that's not true.

The problem with 'just-live-with-it' journalism, and what's transactional publishing?

What happens if we start to report that people should just live with things getting worse?