Can Your Readers Trust You With Their Time?

Trust has always been important for the media (even though most publishers don't seem to focus on it), but the way we define it has changed a lot over the years. And, today, trust is increasingly centered around time.

We now live in this incredibly stressful world with so much noise and so many distractions, you will notice how people often comment "this was a waste of time" or "this is well worth the time".

So, offering people value for their time is now a key element.

This is particularly true when it comes to subscription-based media. If you want to convince people to pay, a critical element to promote is what you offer people in terms of their time. This is far more important than to talk about other features, or how much content you have.

Get full access to thousands of stories about hundreds of topics.

But in today's world, this doesn't sell very well.

The reason is obvious. Today we have access to so much information from so many places that just giving people more content instantly makes you think about information overload rather than something of value.

A much better thing to say is how your content can fit into people's time. For instance, Highbrow, the high-intent micro-moment learning site I wrote about in a previous article, is offering you ways to learn in terms of time.

Specifically, they have created a platform for 10-day courses that each take place over five minute emails.

In other words, it's something you can read every morning over breakfast or during your daily commute.

But it's not really that it's short that makes this a better selling point, it's the focus.

At the other end of the scale, we see sites like FStoppers, which I have also mentioned in some of my other articles. They are offering people very high-end photography tutorials, with each series being between 5 and 20 hours long. 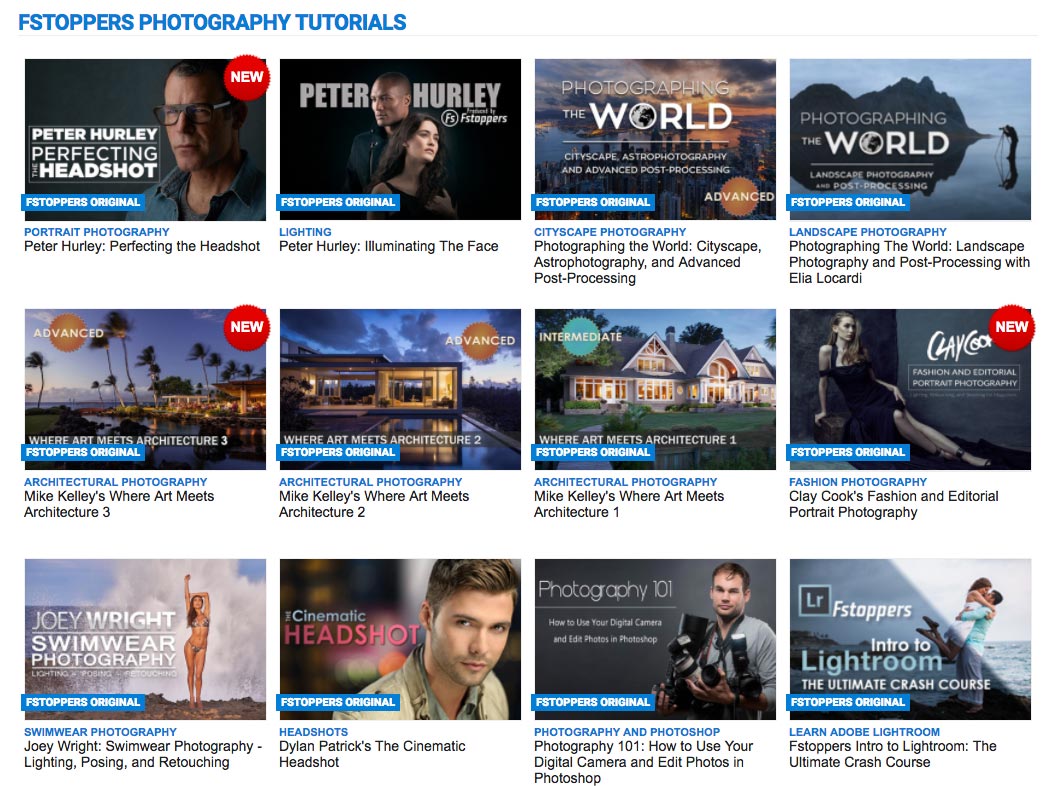 They too are talking about time, specifically how this is time worth spending.

Fstoppers.com has once again teamed up with Elia Locardi to produce a second travel tutorial titled Photographing The World: Cityscape, Astrophotography, and Advanced Post-Processing. When compared with Elia's first Fstoppers tutorial on Landscape photography, everything in this tutorial is bigger, longer, and more advanced. With more than 15 hours of video content, this tutorial will take you around the world to 5 different countries and 7 unique cities spanning from ancient architecture all the way to some of the world's most modern cities.

Here is another example from another photographer. And again, we see how this entire presentation is designed to explain why buying his tutorial is worth your time.

Compare this to what most traditional publishers are doing. For instance, if you head over to the LA Times, this is their subscription page. 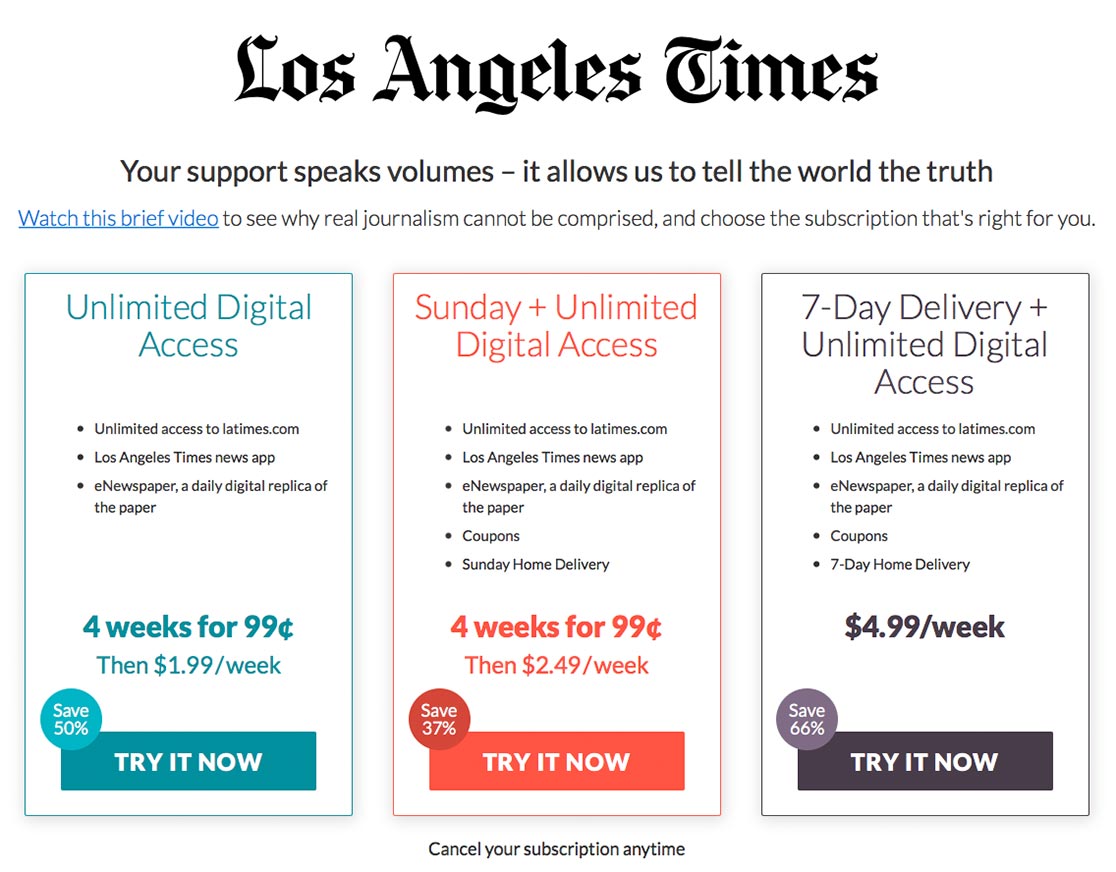 Notice how, at no point, do they explain to you why they are worth your time. Instead, their selling points are based on features like 'unlimited access, a news app, coupons, etc.'

However, there is also a link to a video presentation at the top of the page, "Watch this brief video to see why real journalism cannot be compromised."

But when you click on that link, what you get is this: 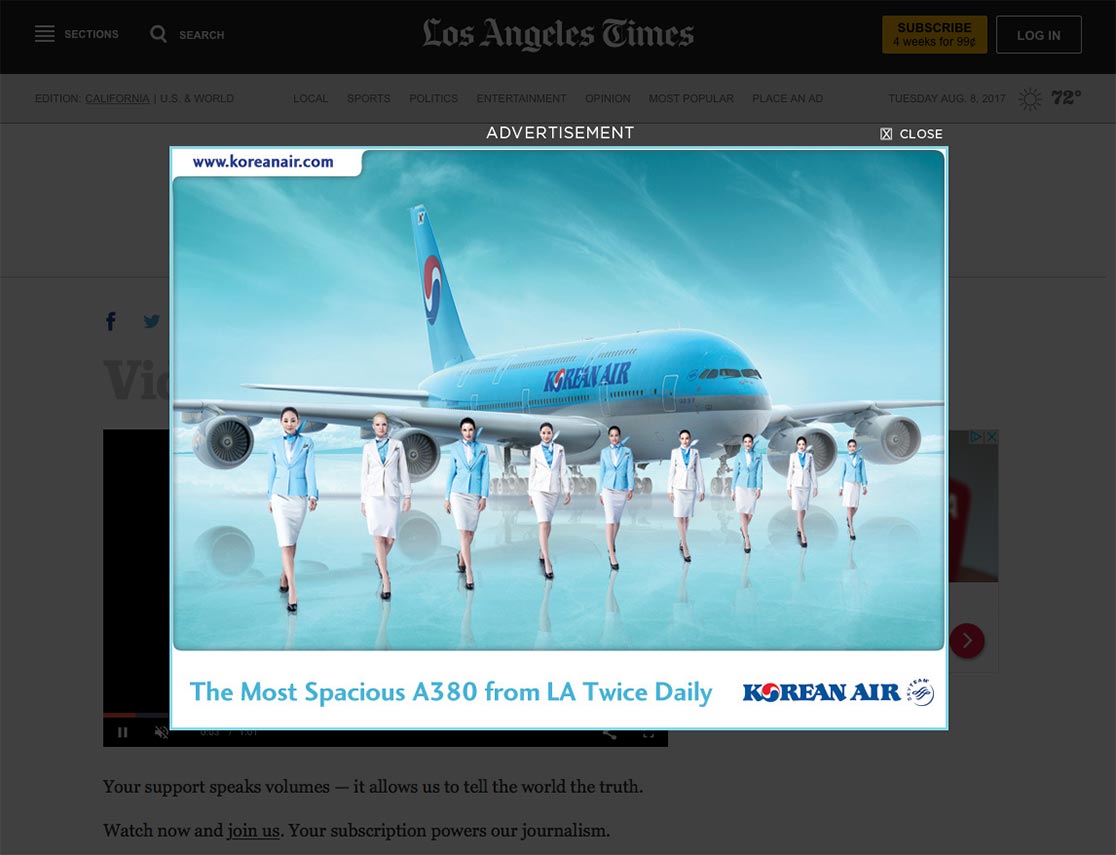 I'm not kidding. This is the actual page where LA Times presents why you should subscribe to them. It has a freaking ad for an airline blocking the entire screen!

I can only imagine how many potential subscribers they have lost because of this.

Not only do they fail to prove that they are worth my time, they are literally demonstrating that they are wasting my time. What's even worse is that when you click to remove the ad, the video starts playing with the sound off.

And when you turn the sound back on, you then have to rewind the video because now it's no longer playing from the start. Then you see this:

From a purely journalistic perspective, it's not a bad video, but as a sales video it's no good.

Notice how the 'call-to-action' at the end is "Do your part to protect the truth." In other words, the LA Times define its readers as people who are there for them, rather than the LA Times offering something for the readers.

Because of the political mess that currently exists in the US, some readers might actually support them. But in general terms, if you want to sell something, you have to demonstrate why you are worth your readers' time, not why your readers are worth your time.

We have a similar problem with many magazines, which also generally fail to demonstrate why they are worth spending time with.

Lots of magazines have a subscription strategy based on giving people a gift, and often that gift isn't even related to the content in the magazine.

Think again what that message sounds like to people. These magazines are basically telling people that they couldn't even be bothered to create a real product... so, "here is a random gift instead".

This kind of worked in the past, but today it's just a massive failure. And for most publishers, it leads to people subscribing as a form of bargain hunting, rather than as loyal readers. This makes your churn rate really high.

Publishers need to completely rethink this. You need to redefine your subscription strategy around time, by finding ways to make that time valuable to people.

This is the single most important subscription strategy that you can have.

It's worth remembering, however, that the focus on time isn't just about when you are trying to get people to subscribe, it's also about how publishers interact with people every day.

Every time a publisher interacts with its readers, they should feel that this was time well spent. But sadly, many publishers choose to waste people's time.

We see this every single day, across pretty much every newspaper, because publishers are still just thinking about their publications as a package. The concept of 'time well spent' on a per article basis, is something many editors don't think about.

They have trained their readers into thinking that each article isn't really worth thinking about, because it's all throw-away news anyway.

This is not a good trend, which we can clearly see when we look at things like reputation and loyalty, and I'm seeing more and more people react against it.

So, rethink your editorial strategy around time. How would you make every moment, both the big and the small ones, worth your reader's time?