Comparing The Active Past With The Passive Future

One big problem in any industry is when people use studies to further their goals. That itself is a contradiction in terms. A study is supposed to tell the truth, but the reality is that most studies are made to prove a point.

A short time ago, a new study came out about newspaper advertising for the automotive industry from Newspaperworks, the Belgian newspaper publishers' marketing platform. That alone should get your analytic ninja sensors tingling. It's not exactly what you would call a neutral bias.

There are some good things in it, like finding that 44% plan to buy a new car within three years. But the study is also full of problems, and the media are making them even worse.

One example is how INMA (an otherwise great organization) chose to report it, which was where I found it). They wrote the article: "Newspapers are a valuable source of information for potential car buyers". Not only was that article heavily biased in itself, but they also chose to report only the graphs that painted the best picture for newspapers. 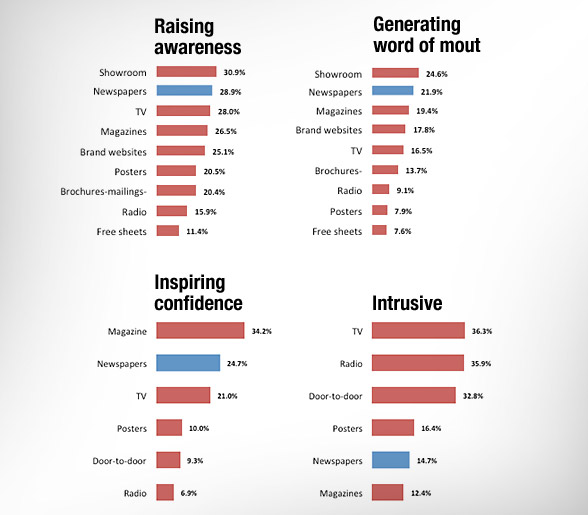 Can you spot the problems here?

Whenever I see a study where only one channel is highlightet that's when you know it's actually a form of lobbying.

Notice how all the graphs paints the newspapers in a positive light? They seem to be good for everything, and they are not annoying. I'm not saying this is wrong, but real-life marketing usually doesn't work this way.

Newspapers are good for something, but not for everything. So something is missing here.

Notice that the contents of each graph is different. The second set of graphs are missing most of the direct channels, like mailings and brand websites. Why did they design the study to exclude those channels when it came to the question of confidence?

This alone makes me highly skeptical.

Note: If you want to know why, read: "Analyze The Data You Don't Have".

Then we have the problem of passive versus active. They are comparing active advertising platforms, where the ads are pushed into people's face (newspapers, magazines, TV, radio, posters etc), with passive platforms that people have to go to, like brand websites and showrooms.

That is not a useful comparison. It's two completely different things. Why didn't they compare newspaper advertising with ... you know ... digital advertising or social advertising?

This whole study seems to be based on how the world was back in 1997, back when brands didn't advertise digitally, and only a few had their own website.

Again, I'm not saying the study is wrong. But they are not measuring anything useful in relation to the multi-funnel advertising world of 2013.

How should they have done this? Well, one way would be to illustrate what each channel is good for. Like this:

Note: There are several ways to illustrate this. What I have done here is to normalize the data around the midpoint for each topic.

We see that if your goal is...

This gives you a completely different picture. From an overly optimistic focus on newspapers, we now see the much more familiar multi-funnel world of advertising.

And remember, they left out social and digital advertising channels. And they also didn't look at the all important mixed world of media. Back in March, I wrote about the positive impact of mixing TV and digital, in "TV Commercials versus Digital Advertising".

Be careful about hidden agendas and mistakes by journalists

Another thing caught my attention when comparing the study with the article posted by INMA. In the article, you can see the graph below, illustrating that, apart from showrooms, newspapers are the best platform for generating word of mouth. 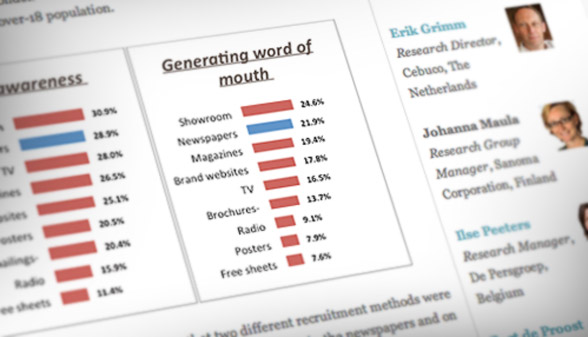 But the problem is that the study doesn't say that. Instead, the study says this: 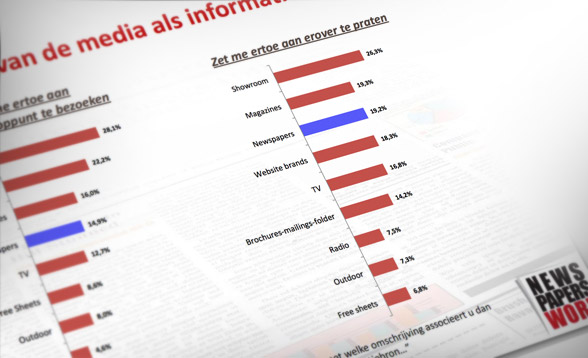 Granted, the numbers are not that far from each other, but what the heck? In INMA's graph, newspapers perform 24% better than brand websites. In the actual study, the difference is only 4%.

It's the same story when we compare the other graphs. None of the numbers reported in the INMA articles seems to correlate with any of the graphs in the actual study. Granted, the numbers are kind of close, but they are not the same.

What is going on here? Did they update the study?

We started out with what we thought was a known-known. We knew what the study was about, and what the numbers were. Then, when we analyzed the result, we see that are critical elements missing, which caused the study to become a known-unknown.

Then we see that the numbers themselves are reported as being different from the ones in the actual study, which leaves the question of which are the correct ones? This then turns the study into a unknown-unknown.

So here we have a heavily biased study, which ignores all the disruptive digital and social channels that have emerged over the past 10 years. It hides data for direct channels when it comes to sentiment, and it's being reported more favorable towards newspapers than the study indicates.

So if we were to learn something from this mess, it would be this graph.

What I have done here is to map out all the questions for each channel.

As you can see, newspapers and magazines (greenish), do perform well across the board, but not in a spectacular way. The direct channels (blueish), being brand websites and brochures, seem to perform pretty much the same way.

And keep in mind that they are not looking at digital or social advertising. This is the traditional web.

TV only stands out when it comes to reputation building, but again, we miss the insights into the new digital forms of TV.

So if you are a car manufacturer, when it comes to traditional channels, the answer is very much in the mix. No single channel seems to stand out in any significant way.

Personally, I would focus more of my attention on channels that persuade people to come to my store, and back that up with channels that create awareness and encourage long-term connection.

For instance, brand websites are almost twice as likely (according to the study) than newspapers to prompt people to visit your store. But since brand websites are something people have to go to, you have to mix that with awareness to make it work.

In the short term that means creating awareness via digital and social advertising channels, along with traditional channels like newspapers and magazines.

In the long term, it's more relevant to focus on building up your reputation (via TV, magazine and your shop), mixed with connecting with people socially and via influencers.

In other words: Be awesome!