Competing with Flipboard? Come on!

The first article I read this morning was the interview with Condé Nast's Scott Dadich on "reinventing magazines for the iPad and why partnering with Apple matters". It is really scary article. He talks about digital publishing, but every single word he says is firmly based on a print mentality - one in which packaging and broadcasting are the only factors.

He starts out by talking about the cover.

To have a dedicated container on a tablet device, the iPad, where covers are the primary means of purchase and browsing is something we've been looking for a long time.

Covers as the primary means of purchase? He must be mad! Or maybe he has just never heard about people linking and sharing content to spread the word. Or about making something go viral because people want tell their friends about it?

Could you imagine, say, that a site like Techcrunch where to stop posting new articles as a stream? Instead, they would put them all into daily packages with a cover on the front. And limit it to a digital newsstand where people have to browse and download each issue?

It would kill them.

The only people who can possible think that packages and covers are a good idea are those based in a disconnected world. A world in which exposure through vendor controlled newsstands is the only way to sell.

He then goes on to praise Apple's app store or more specifically the upcoming newsstand. And for a company like Conde Nast, I am not surprised. Apple's newsstand fits neatly into their world. A 30% cut it is a much cheaper distribution channel than what they are used to.

The real issue, however, is the value of the exposure. We all know that being featured in the app store has a tremendous impact. Just look at small games like Tiny Wings.

But there is one critical question that I cannot get publishers to answer (I have tried many times) - which is: What is the difference between being featured in the app store, and just being there.

We all know that Rupert Murdoch's "The Daily" initial growth was largely caused by all the help they got from Apple. But what happens when a magazine creates an iPad app and isn't "discovered and featured" by Apple. There are now 100,000 iPad apps in the App store. How would people find you if you are not featured?

I launched the iPhone app for Baekdal.com back in 2010. It wasn't featured by Apple in any way. It was just added to the app store, and you have to search for it to find it (like almost all other apps).

Note: The iPhone app has been discontinued because I am not giving Apple 30% of Baekdal Plus.

Since the app is using RSS to pull in content, I can track active daily usage (which is a much more meaningful number than the number of downloads). And at its peak, I had 23 people using the app.

I have never experienced an adoption rate that bad. App store exposure my ass! I can get more traffic just by posting a single tweet.

Big publishers like the New York times, Conde Nast, The Daily etc. are enjoying extra exposure because Apple wants to use them to control the iPad publishing market. As such, Apple is promoting them, and that is worth a lot of "free" exposure.

But what happens in a year, when Apple no longer need to use them to advertise the iPad? When you just become yet another magazine in the app store? What is the exposure worth then?

Finally he talks about how apps like Flipboard is a competitor.

Apps like Flipboard and Zite, the feed-based apps, allow users to shape the news and reading they do. But I feel like, and numbers confirm, there is a place for editors still.

A place for editors? That makes absolutely no sense. Flipboard doesn't remove the editors. It allows people to choose what editors they want to follow. It is not just random content.

Flipboard is not even a magazine. It is a browser, just like Chrome or Internet Explorer. In it you can browse the sites and sources you care about. And it is a newsstand - just like Apple's newsstand. 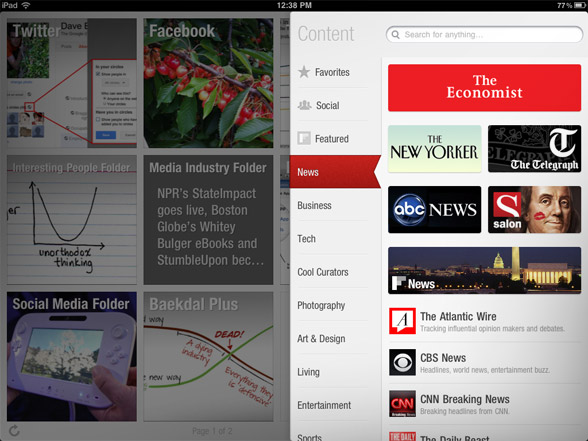 Flipboard is not a competitor. It is a sales channel.

In fact, did you know that there actually is an iPad app for Baekdal.com? Yup, it is in the App store. It has been featured several times by Apple - and downloaded more than a million times.

It is gorgeous. In it you can read all my articles - including all the Plus articles if you are a subscriber. You can favorite those articles you like the most. It has a lot of sharing features built right in. You can share them on Google reader. It is directly integrated with both Twitter and Facebook. You can mark any article as "read later", and you can email them - it is entirely up to you.

It is not limited to just my articles. You can also read all my tweets, see the pictures I post, and you can find all the links that I share with you every day.

If you are into design, you can read 42Concepts as well - and see amazing designs like this metal dinosaur. No need to download and start two different apps just because you want to read two different magazines. It is all easily available in one convenient place.

Best of all, you can bring in your own content too. It is not a siloed app. You can mix and match content from any source, not just from Baekdal.com.

Here is what it looks like. Isn't this beautiful? Simple, elegant, easy to read, always up-to-date, no lengthy download and fully sharable. 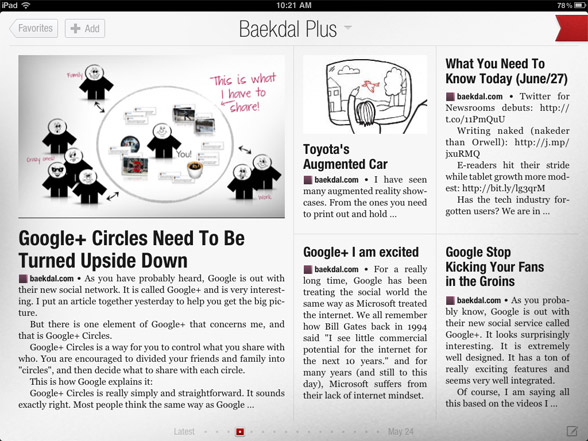 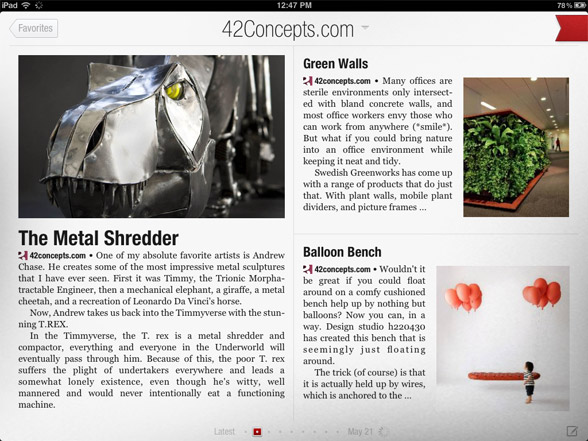 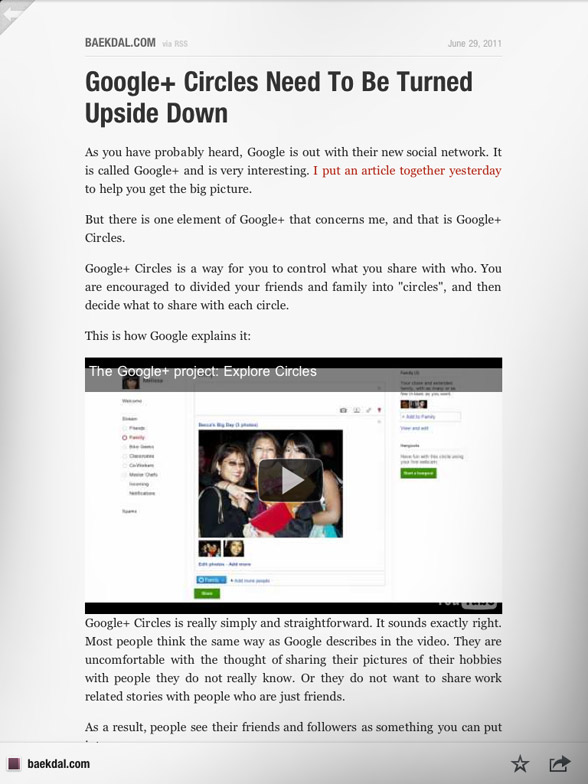 Yes, you guessed it. This is Flipboard. If you want to read Baekdal.com on your iPad, just add any of my Twitter feeds, RSS feeds, or your own unlimited RSS feed for Baekdal Plus subscribers.

What possible reason could I have for creating my own app? I can give people so much more by being where people are.