Defining a Market in The Connected World. You Are Not in Kansas Anymore!

Instead of looking at the real shift that is happening in our world studies put each mobile device into a silo, leave out a big part of the overall market, and measure each as if they are not connected.

I recently came across this graph showing what percentage of people who keep up with news on different devices. The graph itself is very interesting, but Poynter (and several other media companies) then concluded "The chart that shows why iPad apps are so appealing to news organizations."

Wrong! That's not what this graph is telling you. 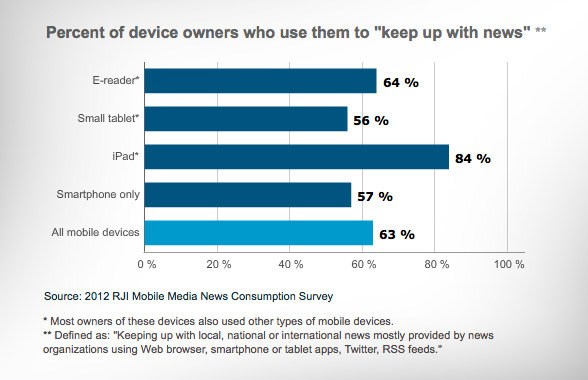 Let me explain the problem by illustrating how our market 'thinking' has changed over the past 10 years.

Back when I was in business school, I learned to look at markets by doing surveys for each one and then conclude that the biggest one is also the one to embrace. For instance, if you are a Scandinavian company and you want to expand into a new market, you would do a survey to see what the likely success rate would be for each country.

For instance in the graph below, UK looks to be the best market to test out your expansion plans.

The reason why this worked is because, in the traditional world, people are not connected with each other. Each market was truly unique. People living in the UK did not know what people did in France - and vice versa.

Most businesses still operate this way. For instance, Pixar's Brave is coming out this weekend in the US, but here in my country I have to wait until the end of August. In the past this didn't matter, because I wasn't connected with people in the US, and I would have no idea what they could see 'over there'.

The problem is that in the connected world, people communicate with each other across the old traditional boundaries. I know that Pixar's Brave is coming out this weekend, because I follow Pixar on Facebook and on YouTube.

Pixar has spend months trying to get me to be excited about it only to not deliver on their promise. When people in the other markets cannot engage with your product, they get upset.

This is the worst customer experience you can create. First you spend months building up excitement and momentum, which is further enhanced by the viral effect of people communicating and connecting with each other. Then, when you reach the point where people are so excited about your product that they want to buy it, you slam the door in their face - and you make people feel like some kind of secondary citizen.

You take the best moment in time, the moment when people want to buy from you, and you turn it into the worst possible experience any customer can have. The experience of feeling rejected while all your friends are allowed in.

Why would a brand do this to their customers? The answer, of course, is that they are defining their market as if we still live in a disconnected world. A world that no longer exists.

No longer can you define your market as a region. The connected world has caused us to have a new definition of how we define a market.

If you have a physical product, limited by production and distribution time, you might need to limit who can buy it. But while you, in the past, could limit it to a region, in the connected world you can only limit it to an audience. 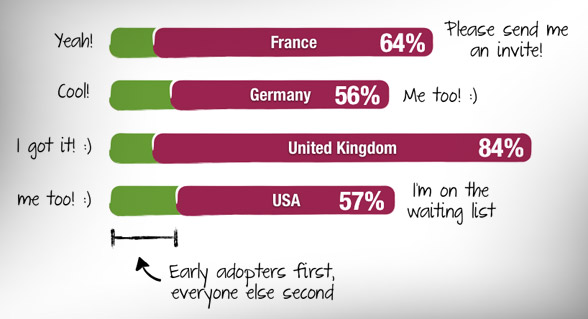 One example is that you could limit it to only your early adopters, existing customers, or social followers first. People accept that because it embraces the connection.

Pixar, for instance, could create a 3 stage release plan like this:

The result of that would be phenomenal, not only because it rewards people for connected with them, but also by using your followers to drive reach to everyone else.

And look at how dramatically it changes how people feel. With a traditional market thinking, brands are alienating their customers and making them angry. Now, even though most people still cannot see it, their expectations and excitement are even higher.

The difference is that the traditional market thinking punishes people when they connect with each other. While the connected approach rewards it.

The real shift, however, is that the traditional market has not just evolved into the connected market. It has actually split into two. The other one is the mobile market.

Mobile is not a thing, and it's not a device. It's you and me. We, as people, have become mobile, meaning that we no longer put ourself into a consumption mode.

Just as we are now global by default (not restricted to a single country), we are now mobile by default as well. We are no longer just using one device; we use whatever device that happens to be near us at that moment.

If you only decide to focus on the iPad, you are pissing off people who have both.

People who only own an iPad are happy, because you are delivering an excellent experience. That's great.

At the same time, people who don't own an iPad are angry, because they constantly hear about your products in their social streams but cannot use it (the connected market). That's bad.

But the biggest market is the people who use both an iPad and another device. This is your new primary market. And for them, by only focusing on the iPad, you are forcing them into a consumption mode where they have to think and plan for a single device first, before they can use your product.

Another factor is that there is one device that is even more powerful than the iPad or the smartphone. We call it...the laptop. News consumption on laptops is 25% higher than on the iPad and 37% higher than for smartphones. 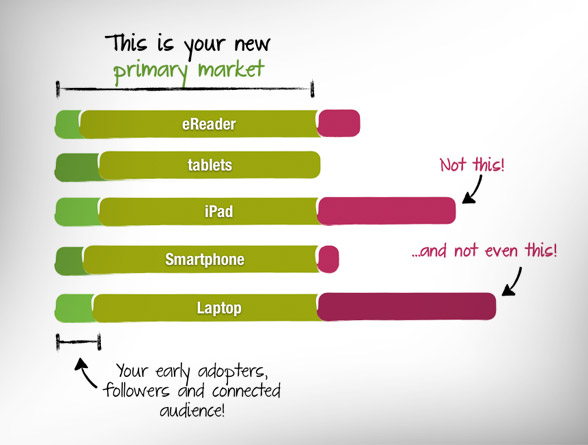 The above study is the result of the blind fascination the media industry has for the iPad. Instead of looking at the real shift that is happening in our world they put each device into a silo, leave out a big part of the overall market, and measure each as if they are not connected.

The study itself is interesting, despite the glaring omission not to measure laptop use. However, the conclusion that the iPad is bigger is totally wrong. It's a product of wishful thinking, trying to make the new world conform to a traditional market approach.

Some devices will have a higher use than others for certain things, but that is only a plus that you get by embracing the connected world. It's not a market.

Mobile is not a thing; It's you! Your market is not a region; it's a connection.