As you know, Baekdal Plus (this site) is a premium content site, in which my subscribers pay $9/month for articles and reports covering strategic advice for people in the media and marketing industries.

How important is this shared traffic to my growth, you ask? In short, it's critical. You can see just how critical in the graph below. This is a breakdown of one of my latest Plus reports. 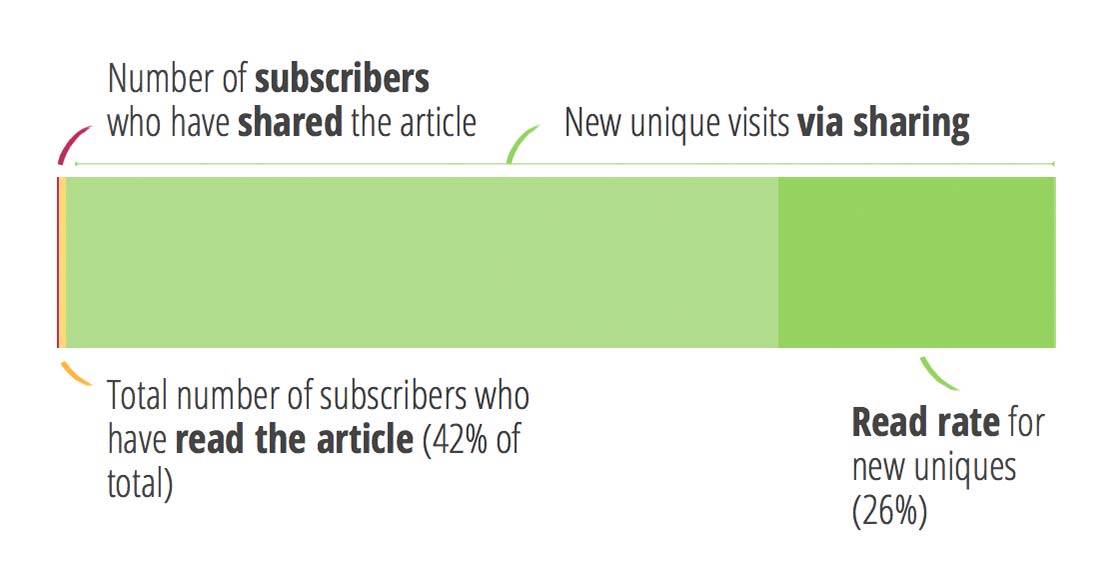 As you can see, 42% of my subscribers decided to read this article, which I consider to be quite good. Of those, 19% decided to also share it (8% of the total subscriber base).

And because of this very small group of people sharing the article, people outside my subscriber base had a chance to read it as well, of which many decided to reshare it.

The result is quite staggering. The article reached 1700% more people than those few subscribers who shared it. Without sharing, none of this would have happened. This in turn caused a free-trial rate that was 380% higher than the initial shares themselves, and this will hopefully lead to several real-conversions in a month or so (it takes a long time to build up momentum and convert people into readers).

While this might look fantastic, there is a downside to it as well.

First of all, like with a paywall, a paygate kills your free traffic. Before I launched Baekdal Plus, I had more than one million visitors coming to this site. Three years later, my traffic is down by 95%. Granted, most of this (85%) is because social crap sites can no longer index it (like Stumbleupon).

But while that might sound bad, remember that even with only 5% of the traffic, I make almost 10x as much money than what I used to earn from advertising. But a paygate is not your friend if you want traffic. Instead, it filters out the accidental traffic, and it leaves you with the (more valuable and stable) core. That's a good thing if you run a site like mine, but it's not necessarily a good thing for a newspaper.

While the above graph looks amazing in terms of sharing, and while some of these might convert into real subscribers, this form of growth is painfully slow. It works brilliantly once you have the right scale, but you need something else to get things off the ground.

One of the biggest problems I have on this site is that Baekdal Plus is an ultra-narrow niche publication for media professionals. Each of my reports are 20-30 pages long, and, as such, I only publish about 35 reports per year. Even with all this sharing, it just doesn't happen often enough.

The result is a very slow growth.

Don't get me wrong. This site is continually growing and sharing is absolutely critical. It's responsible for what I have today. But as a magazine or a newspaper, it's not enough. Especially not in the startup phase.

The special thing about the content industry is that your sale is the result of a longer commitment. It's not like Old Spice where you can just boost your subscriptions through some fancy viral campaign.

You can do single-copy sale as the result of a viral effect or marketing campaign. But subscribers are always the result of building up momentum and influence over a very long time. Some of my subscribers have been coming back to this site for more than a year before they decided to join.

Also, when your business is based on subscriptions, you can't employ social or content tactics to grow. List articles, quizzes, "31 ways to love New York", "...you wouldn't believe what happened next", and infographics might help sites like Buzzfeed in building free traffic... but it will also turn away potential subscribers.

I see this very clearly on this site. When I first launched the site, I thought the best strategy would be a freemium model. I would write free articles to get traffic to come to my site, leading them to my premium content for more.

I was completely wrong about this. My free traffic didn't drive premium reach. Instead, it often distracted it from it. Instead, it's my premium traffic that drives reach, and the free traffic works more like an extra.

Here is what is happening on Baekdal Plus: 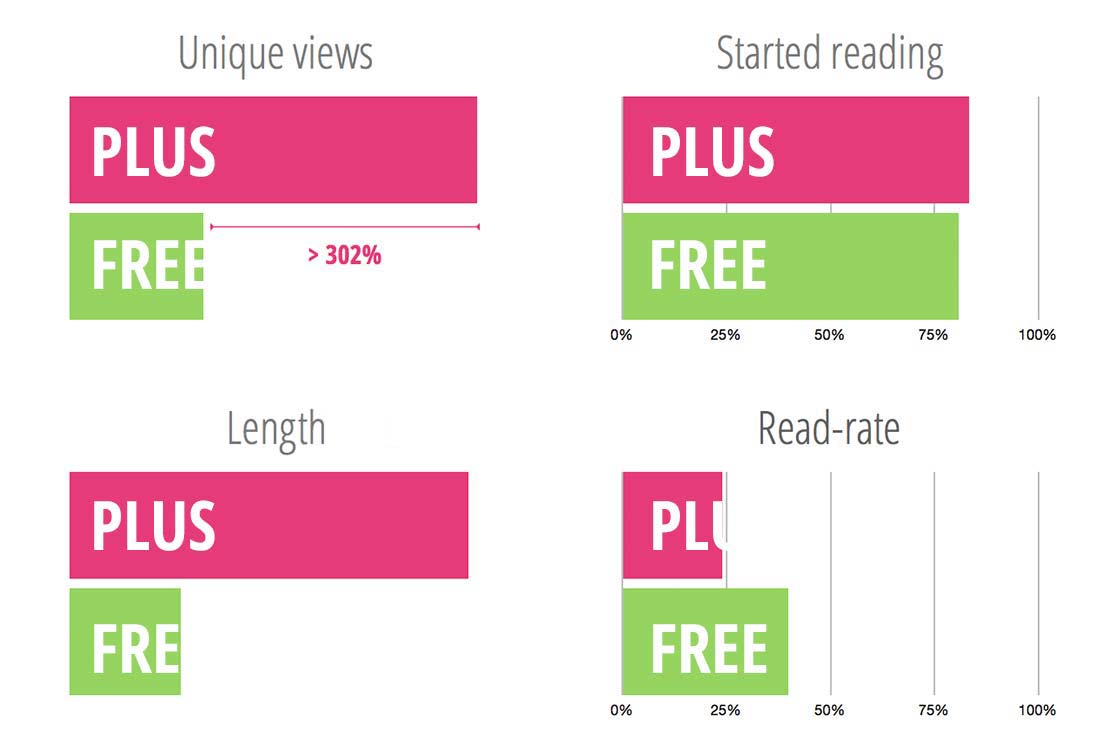 As you can see, the much lengthier premium 'PLUS' content is gaining 300%+ more traffic than the free content. And while people generally read the free content at a slightly higher rate (because of the length), its effectiveness is no match for 'Plus' in terms of reach.

Of course, these are median numbers. There are always outliers that perform dramatically different than the norm. For instance, when I wrote a free article about the problems with in-app purchases, it attracted 710,000 pageviews. No premium content can match that.

The most popular premium article is one from 2012 called "What Comes After Facebook? The Future of Social Media", with 99,126 pageviews.

Let's bring this back to my original point. All the things you see above is the result of sharing. It's sharing that is creating growth and reach, and it's because of sharing that my premium content is outperforming my free content.

But remember, this is how it works for Baekdal Plus, which is a business model tied into creating long-form strategic advice about 35 times per year, for a very narrowly defined target market.

Also remember what I wrote about growth. While sharing is wonderful once you reach the right level, it makes for a painfully slow growth. I would have done many things differently if I were to start a new publication today. I would have started with more people, and I would have invested a lot more getting things off the ground. You need that initial boost.

And if you are a newspaper editor thinking: "This is great. We can use our existing readers to give us that boost", well not exactly. The main problem you have is that your existing customers don't have a sharing culture. Getting a boost from your existing market without it leading to sharing, isn't helping. The magic is in the combination.

But no matter how you look at it, sharing is absolutely critical. Not just for me and my business model, but to any model. The dynamics of each model might vary, but without sharing you are getting nowhere.