How Should We Define News?

We have seen a lot of surveys and reports on the consumption of news online. One of the biggest reports, in recent days, is Pew Research Center's "State of the Media." It found that online news news 17%, while offline media dropped 5%-8.9% 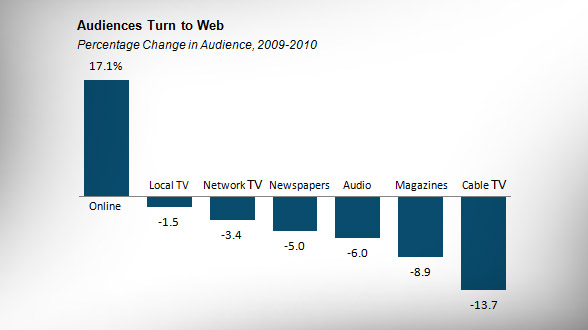 There is, however, one very big question that all these surveys fail to take into consideration. The very definition of news is changing at an exponential rate.

Most surveys either look at very specific media companies (like traditional newspapers and magazines), which will only tell you how the "old guard" is doing. Or they only look at specific types of content.

Even worse are the surveys done by questionnaire. A research company will ask people generic questions like "Do you read news online?" Most newspapers think that when people answer, "Yes, I read news online," that they mean they visit sites like the nytimes.com.

But that is no longer the case, especially not for the younger demographics.

The answer to all of these is yes. It is stories provided by newspapers traditional news companies. Of course it is news.

A couple of people in the print business would probably say no, but to everyone else it is most definitely news.

But what about when you read David Pogue's blog on the NY Times?

A lot of newspaper people would probably say that it isn't, because it is a blog. But to all Pogue's readers, of course it is news.

What if we move away from businesses run by journalists. Is Mashable news? What about Techcrunch, GigaOm, VentureBeat, PaidContent, Inside Facebook, Tuaw, etc.?

What about IO9, Jalopnik, or LifeHacker? What about SwissMiss, NotCot or Apartment Therapy?

Well, this is where many in the newspaper industry really start to disagree. Those sites are not news. It is about lifestyle topics, and not what goes on Libya or Afghanistan.

But this is not about what newspapers think is news, this is what normal people consider being news. And the stories those sites bring is most definitely news to them. It is actually a lot more relevant that any story you might find on the front page of a traditional newspaper.

What about social channels? Is following a company, and influential person, or a brand on Twitter news?

What about this one?

This is another area where many studies go wrong. They measure links to "news sites" - but social media is not about what we link to. It is about what we talk about in any context.

What if you are simply subscribing to Robert Scoble's YouTube channel? That is also news.

Let's move on to the more personal types of sites. Is Jeff Jarvis posting news on his personal blog? Is it news to read what Fred Wilson has to say? ...or what about this site?

Well... that is tricky, isn't it? It is more opinion and advice than news.

What about personal news? My sister lives 5,000 miles from me and has a blog where she is sharing what is going on in her life. To me, her blog is hyper-local news. To anyone else it is just a blog.

News is anything you want to know, but didn't know already. It comes from everywhere, and the very width and depth of news is expanding at an exponential rate.

This is the real challenge for publishers. They used to define news in a very narrow form. It was about politics, crime, foreign affairs, sport etc. And it was only the type of news that appealed to a generalized mass-marked audience.

But those times are long gone. This is the new news market. News can be anything. It can come from anywhere, via any format. It doesn't matter who makes it, or how it is published.

The type of news in traditional newspapers, used to be everything. Now it has turned into just one of the many news niches. News about Afghanistan or Libya is a niche. A very small part of what people define as news today. One that is rapidly decreasing in importance.