Making Journalists and Editors Relevant to a Digital Audience

Back in the early years when journalism was first invented, we made two mistakes that have haunted us ever since.

The first mistake was that we assumed the role of merely being the bringers of information. Obviously, this was not a bad idea back when we had no other way of getting information, but, as we have clearly seen, it's a model that only works in a world of scarcity.

As soon as more publishers enter the market, the public is given other ways to get information and the role of 'bringers of news' rapidly diminishes.

In the 1950s, the media started losing its control of the market. Every time a new form of media entered the market, the old publishers lost out.

Here, for instance, is a graph for the circulation of newspapers in the UK over the past 70 years. 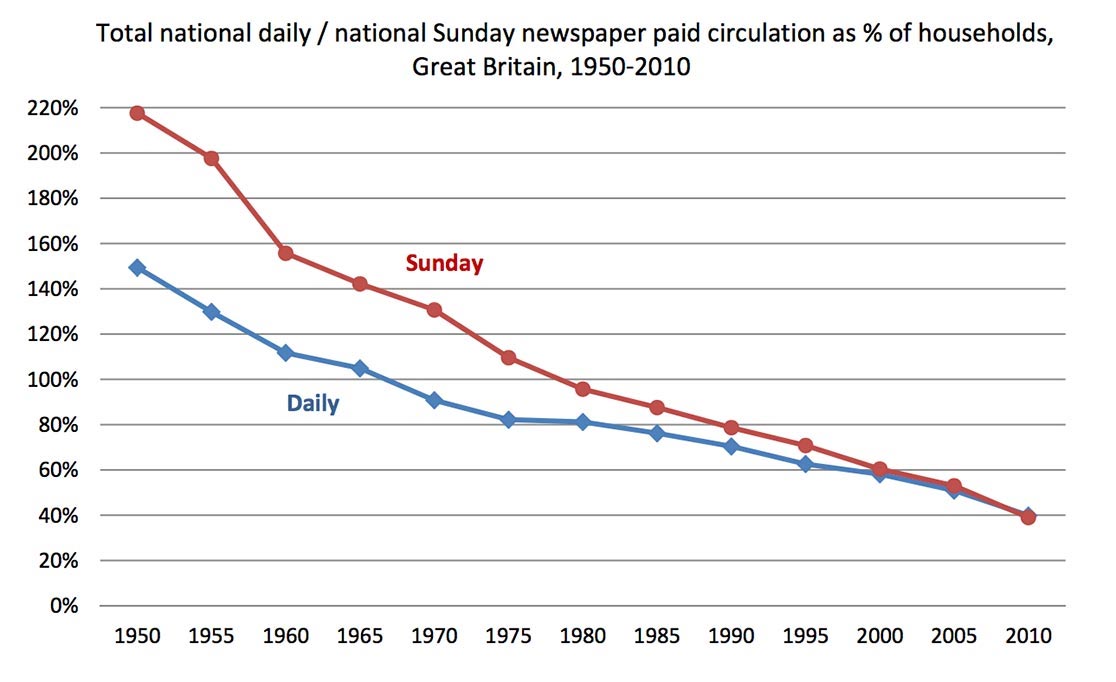 So, being the bringers of news fundamentally doesn't work. The more competition that exists in the market, the worse off you are because your role doesn't allow you to be distinctive.

Every other form of media has long realized this and has since shifted towards a more focused role.

The second big mistake we made was to define journalists as this hidden entity, separated from the stories.

There can be good reasons for doing this. For instance, getting a journalist involved in a story can imply bias or a conflict of interest, and for some types of news, this can be a problem.

But in general, separating the person creating something, from the product being created, is a really bad idea. And in the digital world where we have an endless amount of media to choose from, you need every edge you can get.

The combination of these two mistakes is killing traditional media. When you assume the role of just pushing out stories without really focusing on each one, and your journalists are invisible, you pretty much have the recipe for the worst performing product possible.

It's hard to imagine a worse way of doing something.

Imagine if you were a brand, but you didn't pay that much attention to the need or the focus of the individual products, and your product designers were just seen as a random resource doing random things.

What kind of products would you end up with?

Crappy ones. Ones that don't appeal to anyone, that would only be used when people don't care what they use.

It's a systemic problem that goes back to the very core of journalism, because back in the early days this was considered the right way to do things. But it isn't. It's a terrible way of doing things.

So how can we fix this?

Well, let's approach it in stages.

The much needed mindshift

The first and biggest shift that needs to happen is at the very top of every media organization. Not just with the editor in chief, but even above that, with the publisher.

Traditional media companies behave in a fixed way. They get stuck doing things the old-fashioned way from the get-go.

Let me give you a very simple example:

If you look at a company like New York Times, they recently announced that their food site NYT Cooking would go premium, for the price of $5 every four weeks.

This 34 page report is exclusive for subscribers. (login)