What You Should Plan, Do, and Support

Almost all my articles are about two things. How to understand the change that is happened all around us, and where I think you should focus your energy. But, every time I write an article, a number of people always comment that the old world is still important, that the world doesn't change that fast, or that you should probably do both.

Obviously, the world isn't black or white. Nor can we change something from one day to another. What is more important, people are generally not at 'the same stage.' We have early adopters, early followers, late followers, and the impossible laggards.

Despite that I write articles where I try to persuade you to not focus on search engines, your website, or even email. And I mean every word of it.

I either do, plan to do, or try to do everything I write about myself. I do not always succeed. I often have to change my plans due to lack of resources. And, I spend much time advocating and lobbying my views, because you cannot do anything if the people around you don't share your vision.

The question is what should you do? Not theoretical speaking, but in a real world situation.

The Real World Strategy - in 4 layers

In the real world, there are generally four things you need to do to be successful. Plan and prepare for the future, work in the present, support what you did yesterday, and ignore out-of-date ideas. But, to explain how that work, we need to take a step back and first discuss how this is about people and where the real value is.

The graph below is Geoffrey A. Moore's idea diffusion curve (as many of you are undoubtedly already familiar with). It illustrates how a product (physical or virtual) goes through a population. The x-axis is how it populates over time, and the y-axis is the amount of people at each stage.

The world isn't that simple though, because you cannot design a product from one day to another. It takes time to invent something new, and it takes time to get people on board. On top of that we now have so much choice, that we no longer care for products that tries to reach the general masses of people (mediocrity).

You need to show your audience that you are a leader. That you can help them move forward. That your product is "the" choice to make, because you understand the market.

If you want to create a product, then you need to focus your energy on the early adopters. They will help you reach the majority of your market, mostly via social channels.

The value curve also illustrates where you should focus your energy and resources. If you want to be successful, then most of your time must be spent on 'the next thing,' and the rest should be maintained and automated to the best of your abilities.

Please note: The people element is very important. "the next thing" is not just about creating new products, it is more so about what you want people to do next and what is their next reaction. Case in point: Most people think of customer support as something that follows your product. But, customer support should be looked at proactively, and help form "the next thing."

We can now use this to form a business plan in four different layers. What you should plan, do, support and ignore - as illustrated in the graph below. 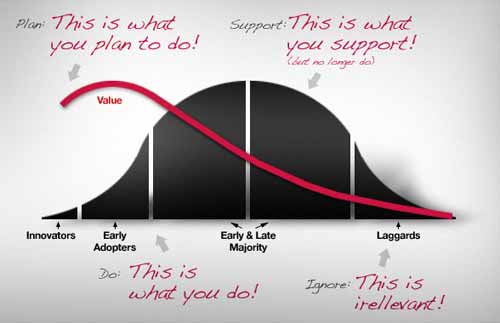 You should actively try to realize your future plans, test out new ideas, and create something for your early adopters to play around with. While doing that you should spend even more time making sure that your early adopters and early majority are having a great time with your new products.

You should also support the products you did 'yesterday,' even if they are no longer an active part of your strategy. Answer people's questions, provide tips and gently push them towards your new ideas.

Finally, you need to free up your resources, by saying no to things that no longer makes sense to use. This is extremely important, and one thing that most companies fail at. You also need to say no to old ideas far earlier than what you might think. There is no value in laggards, so you need to say no to them before you reach that point.

Case in point: Apple destroys old product lines when they are peaking (and introduces new products to replace them). They spend no time supporting laggards, instead they focus all their time on where the real value is.

One example is the car industry, and companies like General Motors. If they had embraced this plan 5-10 years ago, then they would not have gone bankrupt. 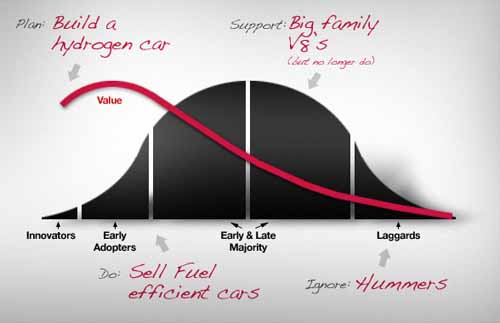 Of course, there are always special cases, where you are creating niche products that go against the norm. But, they too have to change with the times. Even Ferrari is looking into creating more fuel-efficient cars. And cars like the 2010 Fisker Karma are showing the way. 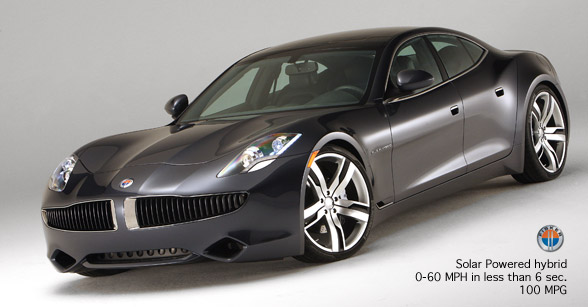 "Web design" (which we need another word for) 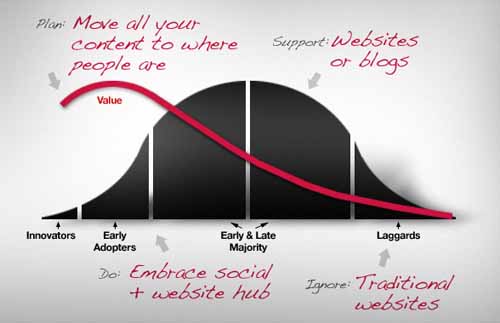 The same goes for web design. Instead of a traditional website, your plan should now be to move your content to where people are. While doing that, you should embrace the social world and use your website as a hub (do this now, not tomorrow).

You should also still support the 'old world' of websites and blogs. But, you should no longer spend any more time creating traditional websites.

BTW: This is an identical copy of my current business plan. This is what I am doing with baekdal.com, and trying to do with a number of other sites.

It is the same with marketing and PR. Plan for social news. Do social networks, support TV & magazines, and ignore print catalogs? 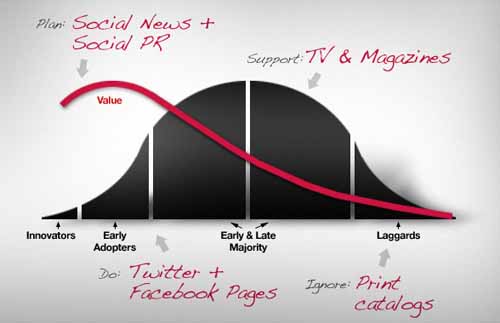 This is your real world strategy.