Print vs. iPad vs. Web

Earlier this week, I tweeted a link to an excellent analysis of the graphic design in Wired's iPad app. If you are into that kind of thing, it is definitely worth reading.

The Wired iPad app does look very pretty, but it is actually not very easy to read. I was very impressed by the style of the first magazine, but by the time I bought the second one, I was already annoyed by it.

The graphics aren't helping the content. It is boxing it in, limiting it, and generally overloading your brain so you forget what the article and story is about.

Granted it is much better than the Popular Science iPad app, which has so much design fanciness that your brain overloads even before you read the first sentence.

Too many iPad developers mistake rich media for rich graphics, but that is not what it means. It means that the content is "rich" in its delivery. You make richer content; it's not about making pretty frames.

However, All this talk about the graphics is insignificant compared to the real problem that the iPad magazines have. The real problem is that they haven't changed. They are still print magazines.

Take a look at the two illustrations below.

First, if we compared Wired's printed magazine with Wired for iPad, the iPad is astonishing. You don't have to go out to your local newsstand to buy it, you can simply download directly. You can watch video clips and click on pictures to swap them. You can zoom out and see the entire magazine. You can even click on the headline on the front page, and it will take you directly to the article.

Compared to print, Wired for the iPad It's wicked awesome! 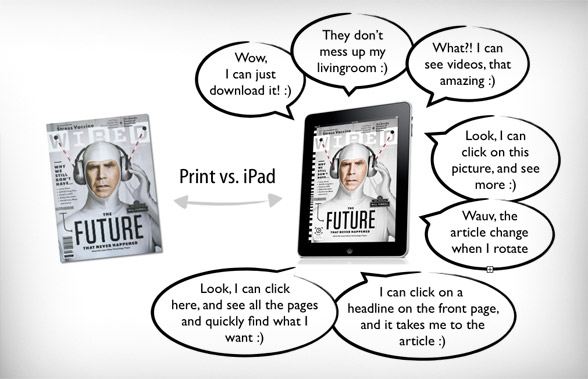 But, if you compared the iPad magainze to the web, you get a very different sensation.

What? I have to download it? Haven't you heard about the web? When I visit wired.com, I don't have to first download the entire site to my desktop computer, before I can read any of the articles. It's just there, LIVE, in the cloud.

Only updated once per month? Why? No sharing, locked to one device, interactivity like in 1997, no links, no comments? Are you kidding me? This is 2010! 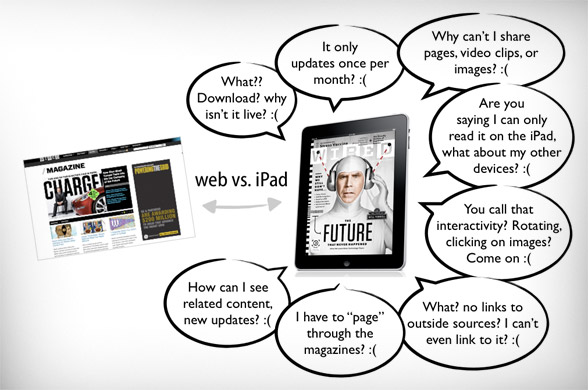 What we see here are the old print media companies looking at this new iPad, thinking "wauv! ...that looks good, and it almost shaped like a magazine." Then they have brainstorming session, where put their printed magazine on one side, and the iPad on the other and start to come up with ideas.

The problem here is that they started out wrong. The iPad is not the next "print". It is a mobile device that allows you to make content even more convenient and valuable.

The iPad is the next web. It's the web without the limitations of the desktop computer. Forget about print formats, it's over. The internet was the next print.

1: The iPad is not the limiting factor. There is nothing preventing you from making a amazing magazine on the iPad. Just look at Flipboard, Cool Hunting, or even just the Reuters iPad app.

The iPad has the power to take your website, combine it with the power of an app, and create a truly rich-media internet magazine. One that is LIVE, socially connected, always up-to-date, and absolutely stunning in every way.

2: Apple isn't your friend. Apple wants you to remain in the old world where people subscribe/buy monthly editions, and where each edition is downloaded via the App Store.

Every single app Apple makes is locked into their little non-connected world. Their iAds network is designed to be fully immersed with no outside connections. Even their new so-called social network "Ping" is locked inside the iTunes store, with no connections at all. You cannot even share a link!

I love Apple's products and I buy almost everything they make, but they do not understand the internet.

The change that print media are facing is not that paper has turned into screens, but that disconnected is now connected.