Social media is a post-conversion activity, and it won't work until you have a social list of followers to reach. You have to start your social adventure by building up a list. Only then can you use it to grow your business.

You cannot start something with social. You continue it.

Traditional media is a pre-conversion activity. It what you do *before* a sale (a conversion). It's an activity designed to create awareness through exposure to people who don't know that you exist.

The aim, of course, is to get people to a point of sale. To get them to convert into customers.

As the volume of media channels increase, the effectiveness of traditional marketing plummets. The graphic below illustrates how many advertisements there are in a single issue of Vogue. That's 165 ads out of 324 pages (49%).

Note: from Dissecting a Print Magazine.

Worse is the shallowness of the relationship. Traditional marketing stops once you have convinced people to buy a product. We then hope that the experience will some day cause people to come back, but brands don't do anything to make that happen. Traditional marketing is one-way only, and it ends with a sale. The next day it stats up again, from scratch.

Traditional marketing is not very efficient.

A better solution is to shift focus from pre-conversion to post-conversion. It started in the simplest way. Grocery stores would give people a card that would provide 'membership' discounts. Other brands followed by creating VIP clubs for their existing customers. The idea was to continue the relationship and get people to come back. In industry terms we call this 'list building'.

The result is amazing:

With traditional marketing, you have to spend 99% of your time creating awareness, but with list building, you are reaching people who are already aware that you exist. Meaning that you can focus most of your attention on building up long-term value. Give people something that would cause them to continue the relationship, instead of restarting it.

The result is a dramatically higher conversion rate per person. Coca Cola explained this in a very simple way with the following slide. 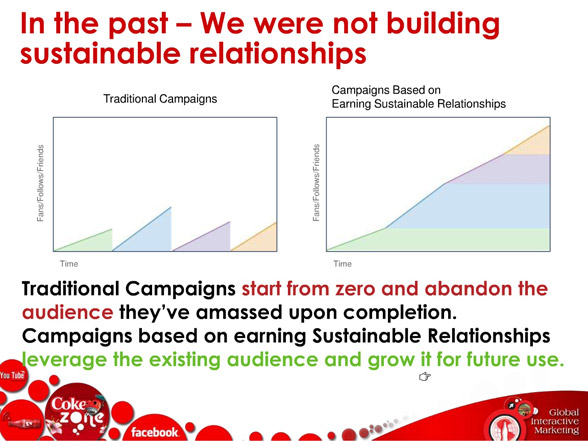 This is the difference between traditional marketing and list building.

The catch is that until you have build up a sizable list of people to reach, your list building efforts will not have enough volume to make a difference in sale.

Unlike traditional marketing, where you can just buy exposure for one million people, with list building you have to earn it first. You have to do something that is so good, that it persuades people to join your list. Which means that the most important element to list building is not selling a product, but how you treat people during the initial phase of your relationship.

List building is a long term strategy, and it takes a long time to get started. But once you get it going, the result is spectacular.

There is also another catch to traditional list building. It cannot grow by itself. Having people sign-up for a newsletter only works for the people who are on it. There is not growth or influx of new subscribers. It is a closed loop that doesn't expand your audience. To grow you still need to turn to expensive traditional marketing.

This is where social media comes into play. Social media is a public list that grows through sharing. Social is not marketing; it's relationship building.

Compared to the old list building methods, social media is about a billion times more exciting, and it changes the game quite dramatically.

First of all, the actual conversion rate of social engagement is often much lower than with traditional list building. The reason is simply that social is much easier to do, and thus attract a far more diverse group of people. The traditional lists only include people who really, really like you. But on social channels, hitting a like button is easy.

This is why you see so many people argue that email is still the most important channel. If you only look at the conversion rate, email works far better than social.

An exciting factor of social is that it isn't limited to your list either - aka the number of fans or followers you have. People can like a product without being customers, and they can like it without being a fan. And since sharing creates exposure through personal recommendations, the resulting pre-conversion rate is much higher than with traditional exposure.

What we have is potentially a perpetual engine. Once you get it started, the outcome is higher than what you put into it. 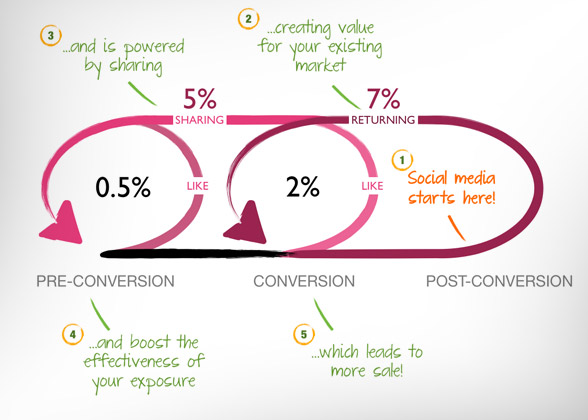 You start it by building a 'list' of people who wants to follow, like, fan, or circle you as a brand. You then use this list to create value, instead of exposure. It's like email lists, you are wasting your time if you just give show people advertisements. People already know who you are, that's why they decided to follow you.

Unlike traditional lists that cannot grow without the support of traditional marketing. Social media encourages growth by default.

You cannot start anything with social

There is, of course, a catch to all this social bonanza. While social media can happen on every level, the social media you do as a brand, starts with you building up a group of followers.

If you are starting from nothing, having a 7% return rate or a 5% sharing rate is still nothing. Social media works the same way traditional lists building. Without a list if followers for you to reach, you will have zero effect.

This is the main problem that I see when brands and startups do something new. They think they can just create a social campaign, and the viral effect will take over and shower them with gold. Same with advertising agencies who just encourage brands to do social gimmicks.

You first have to build up a social list!

Here is an example. Jamie Oliver recently announced something new on YouTube:

So did Felicia Day with her new podcast network Geek and Sundry:

Note: For some reason YouTube's embed code only works in some browser for Felicia's video. But here is a direct link.

So why can Jamie and Felicia start something using only social media, when I just said that you cannot start anything with social?

The answer, of course, is that they didn't. Both Jamie and Felicia has a social list of about 3 million followers on several social channels. So while they are launching something completely new, they are using their existing social lists to get the word out.

And, notice how both Jamie and Felicia started creating awareness about their new projects a long time before they launched. They know that even with 3 million fans, you need months of preparation to get enough people to start following their new projects. They are using their old lists, to build their new lists so that when you reach the day of the launch, both lists will have enough momentum in them to create a spectacular launch.

Social media is a post-conversion activity, and it won't work until you have a social list of followers to reach. You have to start your social adventure by building up a list. Only then can you use it to grow your business.