Tapping Into Your Gut Feelings, Your Source of Intuition

A pro player matches what he sees with a pattern that he knows, from experience, that leads to success. An amateur, trying to do the same, is just guessing.

Several years ago, I was watching a documentary about the human brain. I'm sorry I cannot recall what the documentary was called, but it was fascinating because it illustrated the difference between an expert and an amateur.

One example was when they analyzed the difference in brain activity between normal chess players and grandmasters. You and I think of chess as an exercise in analysis. To win, you just need to be able to figure out what possible moves your opponent can make. The more moves ahead of time you can identify, the more likely it is for you to win.

And it turned out that this was exactly what amateur chess players do. When playing a game a chess, they use the analytic part of their brain to analyze what the best move is, how the opponent will react, and so fort.

But then, when they measured the brain activity in the Grandmasters, they found an astonishing difference. Grandmasters do not use their analytic brain at all, instead they use the part of their brain that is normally used for pattern recognition. The same part that allows you to identify someone's face or finish a puzzle.

I experienced this first hand a couple of years ago. One Grandmaster visited my city, and as an event he would play a game of chess against anyone who dared to challenge him. Even though the poor saps tried really hard, the Grandmaster would just walk up to their table and instantly moved a piece. The amateurs would then look at the chess board, with a frustrated expression, and try to 'analyze' what the best move would be next. They all lost. 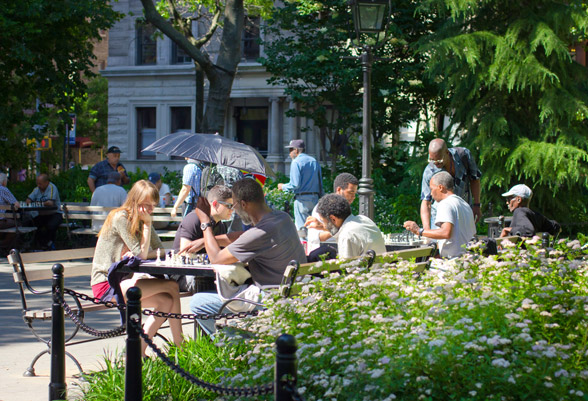 I didn't realize it at the time, but the Grandmaster didn't play chess at all. He was just walking from table to table and used pattern recognition to match whatever he saw in front of him with what his brain knew would be a successful action.

He was playing chess the same way as we are identifying a friend's face in a crowd. He never analyzed the chess boards.

I find this to be absolutely fascinating. What makes you a 'pro' player, is simply a change in how you use your brain. And, of course, this doesn't just apply to chess. It applies to everyone, in every field.

You might remember Malcolm Gladwell's famous 10,000 hours rule. It states that, in order for you to a be a world-class expert, you need to put in 10,000 hours of practice (about five years of full time work). The reason is that you need that much practice to become truly experienced and masterful of your own abilities.

But it isn't the hours that trickers the change. It's your ability to become experienced. And experience manifest itself in your brain by forming patterns that you have associated with a specific outcome.

It's not the 10,000 hour rule at all. It's the pattern recognition rule. Sure, for most people, spending 10,000 hours on something will probably lead to forming the right patterns, but it's not the hours that cause it.

The trick is to be good at forming patterns. The better you are at asking why, finding the answer, and identifying what led to it, the quicker you can become an expert.

I have had coworkers (back when I worked for a big enterprise), who had spent more than 10,000 hours working in a specific field, and they still had no clue as to why their industry worked the way it did. They never asked why. They never tried to understand what the patterns were, and they never associated a specific action with a result.

Even after 10,000 hours of work, they still were not experts at anything. They were just as clueless as when they started. They never formed a pattern, so they were stuck in manual analysis mode.

Of course, you still need a helluva lot of experience. But the quicker you can form patterns, the faster you become a 'master' in your field.

This leads us to another fascinating thing about how our brain works. Most people don't realize what makes you successful. For instance, we often hear successful business leaders point to their gut instinct as the source of their success.

And interviewer asks them: "So why did you make that decision?", and the business leader say: "it just felt like the right thing to do!"

We call this 'using our gut instincts'.

But again, it has nothing to do with your gut at all, nor your instincts. What's happening is that because of the experience of the past, these business leaders have formed patterns in their brains - some leading to failure and others leading to success.

When they are presented with new business opportunities, their pattern recognition brains create a match, which evokes a positive emotion towards one specific solution.

The business leader think they just use their gut instinct, but in reality, they use their pattern recognition brains to match the available options with favorable patterns of the past - on a subconsciously level. And the reason they can do this successfully, is because they have built up enough experience for those patterns to be formed.

This is why the advice "just do what you feel is right" is so wrong. Only people with enough experience can do that successfully. They are the only ones who have the patterns to support it.

If you are young startup, you don't have any patterns to work with. Using your gut instincts, is like playing the russian roulette.

A Grandmaster can devastate 20 amateur chess players all at the same time, just by using pattern recognition (his gut instincts). But as an amateur, you can't because if you use your gut instinct, you would lose much faster. The pro player matches what he sees with a pattern that he knows, from experience, that leads to success. The amateur, trying to do the same, is just guessing.

You need experience to form patterns before you can use your gut instincts for anything.

When the patterns work against you

These patterns can also work against you, and we see this every day in the world of media. Thirty years ago, in the world of print, every one had the experience that a mass-market, packaged, format based output was the best thing to do.

Every single person in print knows this, and the patterns they have formed in their brains are all based on this concept.

But then came digital. And digital is not about a change in format (which would be easy). Instead it's a change that completely alters the very foundation of what media is about.

This introduces a huge problem for the old print people. They all have patterns in their brains that tell them that a mass-market approach is the best option, and that individual solutions would likely fail. So when you present them with a digital+connected solution, their brains tell them that it would be a failure, because that's what matches with their old patterns. Their gut instinct is telling the print people that this new digital approach wouldn't work.

This is why the old print companies are all focusing on monthly iPad editions via Apple's Newsstand.

Apple was smart. They created a platform that confirmed the old print people's brain patterns. The newsstand is a mass-market, packaged, format based platform for old people to continue doing what they have always done ...and it looks new. It's digital and it's mobile.

If you have print patterns in your brain, and you hear that digital is the future, Apple's version of it is what your 'gut feeling' will tell you to be the right match. They are suckering the print industry into their platform by giving them an excuse for not changing, while at the same time appearing to be the right choice because it fits the old patterns ...the ones who used to lead to success.

But for the digital natives (who also all have much more than 10,000 hours of experience), Apple's newsstand looks like a train wreck about to happen. The old print people have not changed anything. They are using the same old patterns in a new format (which is also an old pattern).

The new world is an individual stream of stories, not a mass-market formatted package in Apple's Newsstand.

The patterns that used to lead to success is now working against them. They have to unlearn what they had learned. They have to form new patterns.

In fact, with our world shifting faster than ever. The new pattern you must form is not a point, but a motion. If you really want to succeed, you need to be good at turning future trends into patterns before you need them.

You need to be able to identify what future trends that are not going to work because they don't fit into the patterns of how we change.

Ask why, find the cause, associate it with a result ...and repeat!