The Direct Connection of Tomorrow

Unlike ebooks, in which that condition for success was a tablet, for newspapers that missing condition is something else.

In the article "You Have to Be The Creator", I illustrated how the value of one story was gradually removed as it moved through the media industry. The point of the story was to illustrate that if you want to create value in connected world, you have to be the creator. The old business model of newspapers, to be the bringers of news, is rapidly deteriorating.

This is not just true for newspapers or magazines. It's a true aspect of every form of media. The bringers of news are now all the different platforms that we use, whether it is social channels or aggregators. With a business model based on providing access, rather than editing and republishing.

A simple way to illustrate just how massive this shift is, we only have to look at TV. Many TV stations around the world are based on 15% original programming and 85% "bringers of shows", in which they syndicate and rebroadcast shows made by other TV stations.

Here in Denmark, for instance, we have a TV station called TV3. It consists of three channels. TV3, TV3+, and TV3 Plus. And the following illustration shows one entire day of programming based on who 'created' the show originally. 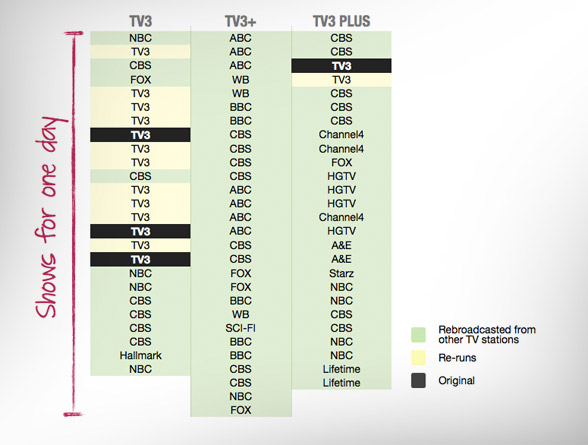 As you can see, TV3 is largely a TV station based on the business model of being the 'bringers of shows'. Similar to how newspapers are based on being the 'bringer of news'. Out of 81 shows, only 4 was original for that day. The rest was either re-runs, or more so, rebroadcasted shows from other TV networks.

This model made perfect sense back in 1995. Back then, people in Denmark would have no way to access, for instance, the American TV station ABC. So just like newspapers needed to bring you stories from around the world, the role of local TV stations was to connect you to shows that you wouldn't otherwise see.

This is what you do if you live in a world where people can't connect to each other. You move content from one place to another.

In 2013, however, everything is different. Now, ABC has their own apps, which can connect and stream directly to your TV. So why would you subscribe to TV3 when you as a viewer can just pick and choose between all the shows on the planet? 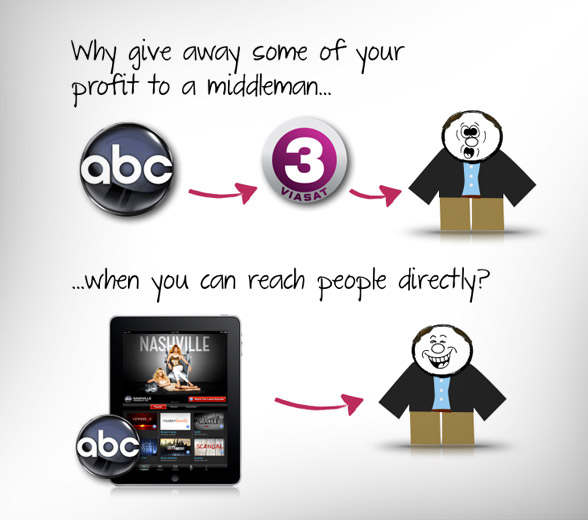 Why would ABC base their business model on syndicating their shows to middlemen (like TV3), when they can connect with you directly and keep all the profit for themselves?

In the past, we needed bringers of shows. Now, we just need a platform. That platform can either be a device, or a service like Hulu, Netflix, iTunes, XBOX or Google Play.

Companies like the ABC will do fine. In fact, their future is looking to be even better than today because they can now connect directly with people on a global scale. But we have to ask, what about a company like TV3. What will happen to them?

Well, this will happen: 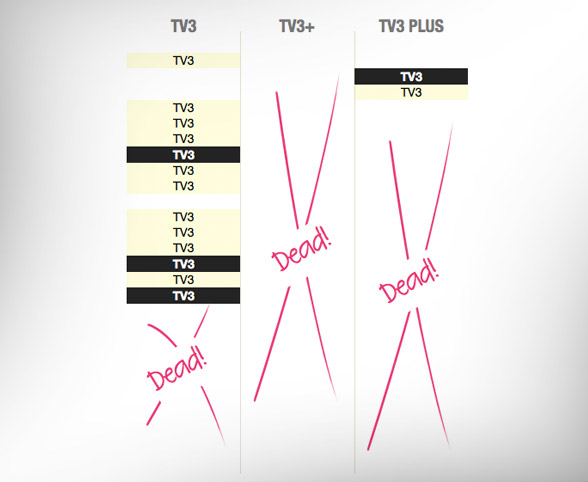 TV3 will no longer have a business model. They don't even have enough shows to sustain their main channel.

From being one of the most successful TV channels in this country, they will turn into a rather small TV production company. One whose future is questionable at best because without their main channels, they probably can't attract enough viewers to keep them going at the same scale.

Instead they are suddenly faced with a future where they will have to compete with small scale shows like Felicia Day's Geek&Sundry. And since everything that TV3 is doing today is based on reaching a wide range of random people (mass market approach), having to compete with highly specialized niche shows who can produce shows at a tiny fraction of the price, means that the resulting ROI is 'problematic'.

ABC will do fine. Same with Discovery Channel, Disney Channel, most of BBC, and many other TV stations. The ones who are in trouble are the 'bringers of news/shows'. The media companies whose main business it is to bring content from one point to another.

This is true for TV3, but it's exactly the same problem that the newspaper industry is faced with today. The difference is that the concept of a newspaper is a lot more complex than a TV station. There are very few newspapers who only 'create' news. Instead, almost all newspapers mix original reporting with republished copied or paraphrased content.

We all know what will happen in the future. The concept of 'creators' versus 'bringers' is clear to anyone. The problem is just that, today, people can't tell the difference between those who just bring people news and those who create.

With TV stations it's simple. But with news, where every article looks the same, it's not immediately clear what newspaper is better than any other. Just look at the tens of thousands of articles about the shooting in the US that the media has been publishing for the past week.

Do you see the problem? People can't tell the difference between the creators and the bringers because it all looks the same. And since many newspapers are scared shitless about the connected world, they are reluctant to pursue their future role of being a creator. True, being a creator might cause you to lose traffic in the short term. It might even cause you to disappear completely unless they can prove that their stories are truly better than all the other stories about exactly the same thing.

No one is claiming that the shift is easy (it's not).

For instance, when I go to the App store to download their app (which I would love to do), I'm being presented with this:

So even though the world has already changed and the transformation is already happened, they are forcibly keeping TV stations like TV3 in business by creating artificial boundaries.

But it's simply going to be a matter of time before ABC has to catch up. Why would people continue to be limited to a TV station that doesn't give them any choice over when or what they can see, if they can watch whatever they want online?

ABC will have to embrace the global world. It's not a question of if they will do it. It's only question of when. And when that happens, TV stations like TV3 will go down fairly quickly.

It's the same with news. The trend is painfully obvious to anyone. You have to be the creator of news, and you have to position yourself as one.

But right now it isn't immediately clear who will make it and who won't, because of the media's effort to keep the status quo. The mess of everyone doing the same thing is obscuring the trend and preventing it from happening. But it will happen! And when it does, most newspapers will find that they have a lot more in common with TV3 than with ABC.

The question is just if it will happen in 2013, 2015... or 2018? The trend has already shifted. The demand in the market for relevant, unique and created news is already here. In fact, people are screaming for it.

It's like looking at the ebook industry. In 2002 everything was ready for it and the trend was obvious to anyone (except the big publishers). But the mess and general lack of simplicity in the market kept it from happening. Then in 2009, Amazon launched the Kindle and Apple the iPad... and then within just two and a half years, ebooks went from an obscure format to the market leader.

The same will happen to the newspaper industry. What we have today doesn't really work, and people want something better. But the conditions are not exactly right, yet. We are missing an important condition that snaps the new world into action.

But I think the true trigger is the editorial purpose. The main problem is that all the truly unique original stories, produced by the big newspapers, are all about topics that people can't relate to (and thus never gain any traction), while the stories that people truly care about are all optimized for optimal snacking and page views (and thus not worth anything).

I think the trigger point is when a newspaper finds a way to flip the two.