I have written about the generational divide before, but I just want to revisit this again since it's such an important factor - especially for us in the media world. It's one of the key reasons why it's so hard for media companies to change.

But the same is also true for brands. A friend of mine who worked for a fashion company selling womenswear for 55+ year old, once called me to ask what their marketing strategy should be for the next two years.

My advice, since we are only talking about two years into the future, was to keep the majority of the focus on print and retail. Their target market isn't digital native.

If you have been reading my other articles this might come as a surprise to you since I'm always talking about digital, but for these brands (there were four of them) this was the best advice.

Of course, I also advised them to think more about merchandising and partnering with the big sales channels, like Asos and Ellos. Doing that would generate far more sales than trying to do something fancy on Facebook.

And I advised them to consolidate their brands into a single web shop. Because when you sell average products for average people, it's practically impossible to achieve any usable conversion rates for each brand on their own, but combined you can create scale.

Note: The opposite of this, of course, is to be a niche channel from the start, during which you use your uniqueness to make people feel special, which in turn allows you to connect and leverage your market. But you can't do this with without cool products.

Obviously, if you have a digital native market, things are different. We have a much bigger problem with abundance and how people connect and interact with each other.

But both models are heavily influenced by this generational divide that functions as a dividing barrier to how we do things.

So how big is the generational divide you ask?

Last week, a study came out looking at the digital media trends for people in Denmark. It's made by DR, which the Danish equivalent to the British BBC.

While it only covers one country, it very clearly illustrate the generational divide and I'm seeing the same in studies from all over the world.

Here is what they found: 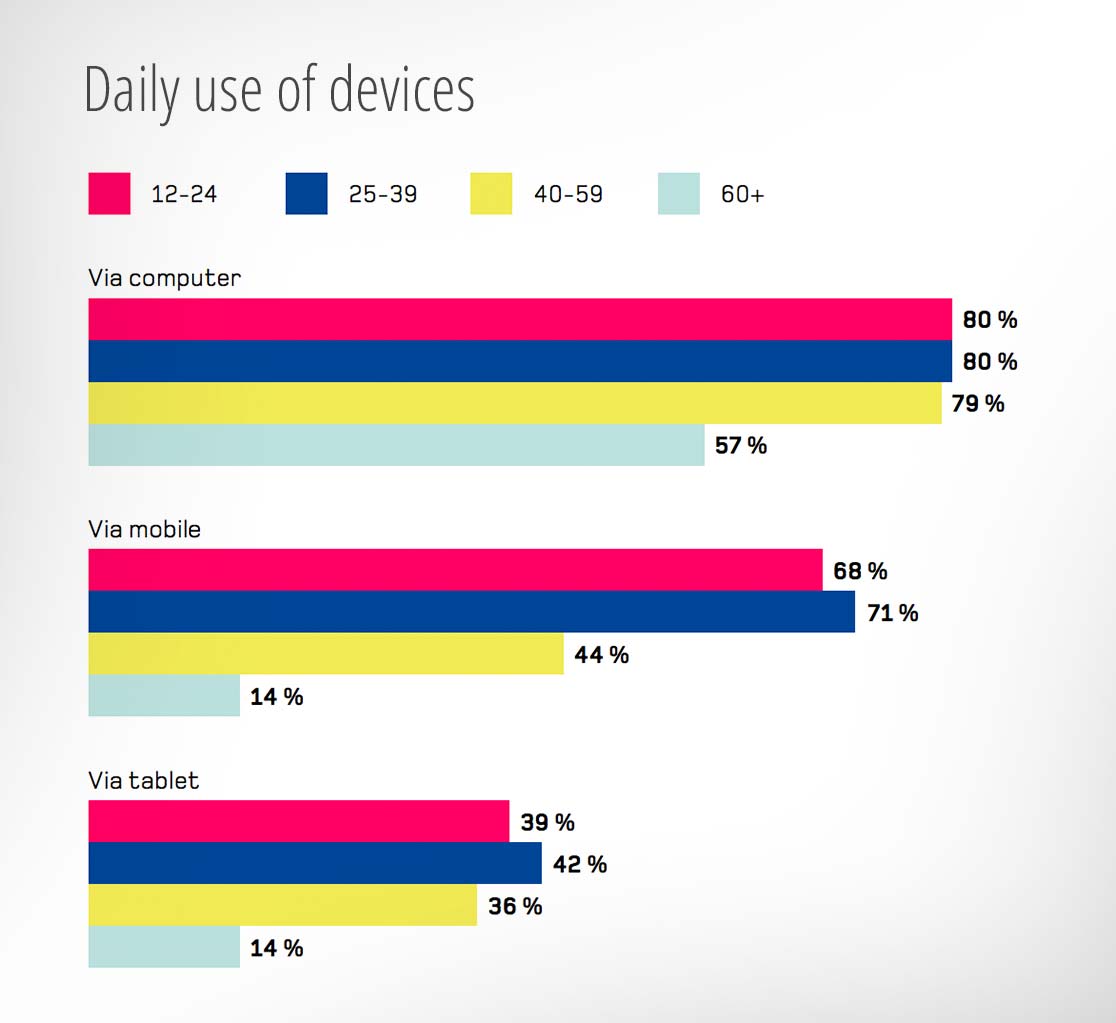 Note: Keep in mind that the Scandinavian countries have some of the highest digital adoption rates. For most other countries these numbers will be lower, but the trends are the same.

When we look at people using the internet via their computers (laptop/desktop), we see that we have reached parity for anyone between 12 and 59 years old. That's pretty astonishing, and it's probably due to just how much we use computers at work.

But when we then look at the people who are retired, we see a huge drop. Now only about half use the internet every day.

Now look at mobile phones, and we see yet another generational divide. And it's kind of the same with tablets, although it's harder to determine as tablets are still in a market with a lot of room to grow.

The cause of this is a very simple difference between digital and non-digital consumers. It all comes down how they perceive their digital devices. Is it merely a tool, or is it also a companion?

If you are from the generation that sees the computer or mobile as a tool, then you don't have the necessary habits to truly embrace the new digital world.

I wrote much more about this in "Tablets and Smartphones: Forget About Age and Time".

Think of it like this: If you have placed your computer in a separate room, it means that you will only use it whenever you have a specific need for it. And during those times, you will walk to it, wait for it to boot up, check or do whatever you set out to do, and then you will return to your living room to watch some TV.

But this also means that you will never use your computer on impulse while you wait for other things, or just as a companion that you can relax with.

This is the behavior that we see with the older generations. And it's the same story with phones. For the younger generations, the smartphone is a companion that is always within reach regardless of where they are. But for the older generations, it's a just 'phone' and it often has a specific place or time. In that sense, it's not use much different than the old landlines.

Think of the implications of this both in terms of daily use, but also in regards to future projections.

If you are a media company with an average reader age of 60, the future might be about mobile, but it's going to be very hard to get your current audience to actually use it.

This is one of my biggest dilemmas I have when advising newspapers. The future is not that difficult to predict, but, if your readers are mostly of the older generations, it's unlikely that they will embrace it by choice.

So your challenge is not really to be mobile, go digital or other such concepts. Those are easy. Your real challenge is that your future is a completely different market and a new generation. And the fundamental difference is that the next generation sees the internet as a companion, while the old sees it as a tool.

Now, you have probably already seen/heard of 'Her', a movie about digital being the ultimate companion.

This is of course an extreme example, but the same is true today. The newspaper (the package) is a tool. Sure, you might enjoy it in a nice comfy chair, but it's something you do. It's an action that you decide to use before you use it. You don't bring the newspaper with you unless you have decided to read it first. And even as an app, most newspapers are designed to be something you tap on, then you open the daily issue, and then you read it.

There is not much difference between that (from a behavioral perspective) than having a computer in a separate room.

News in the future is nothing like this. It's a companion. It's an extension of your daily life, and it's always contextually ready to support you whenever and wherever.

The younger generations don't read the newspaper. To them, news is something that is continually flowing and, whenever something truly important happens, the stream thickens towards that topic.

You can't design it as a 'newspaper' because a 'package of news' is not a companion.

Note: But insights, perspectives and reflections will still be mainly something you decide to sit down with.