One of the biggest mistake companies can make is when their obsessions with factory style efficiency translates into the office.

Let me tell you a story: Many years ago, when I was starting out in life, I went to fashion design school to become a fashion designer. One class was about how our clothes should be manufactured. So I got this idea that, if I could just change the way people worked, I could seriously increase worker efficiency.

My plan was to make the workers sit in an open plan office, arranged in a circle so that each task could be moved from left to right until the product was done (basically like a factory line), and the supervisors would sit in the middle monitoring everything.

It was a great plan. I loved it, my fellow students loved it, and my teachers gave me the highest grade possible.

It wasn't until later that I realized what an appalling blunder I had made. What I had created would certainly be efficient in theory, but it would also mean that no a single person could take a break, or be unique in any way. And people would always feel guilty if they just spent a moments notice on anything not directly work related. Not to mention the anxiety induced stress it would create by having that much pressure put on your shoulders while being constantly monitored by the supervisors in the middle.

In fact, this wonderful video from RSA Animated, discusses just how awful my work plan would have been. I had turned people into supervised robots.

So why am I telling you this? Well, because, this seems to be the new trend in the world of news.

In print, we always had until the next morning, but now we have to get the articles out in seconds. And this has but enormous pressure on newsrooms to increase their efficiency.

I hear about more and more newsrooms who think that rearranging their office space is the right way to embrace the digital world.

First we have the completely ridicules Fox Newsroom, which is not only insane in terms of how it works, but imagine having to work like this every day:

And today we can read over at Monday Note about Die Welt's new newsroom, which is strikingly similar to my old concept. 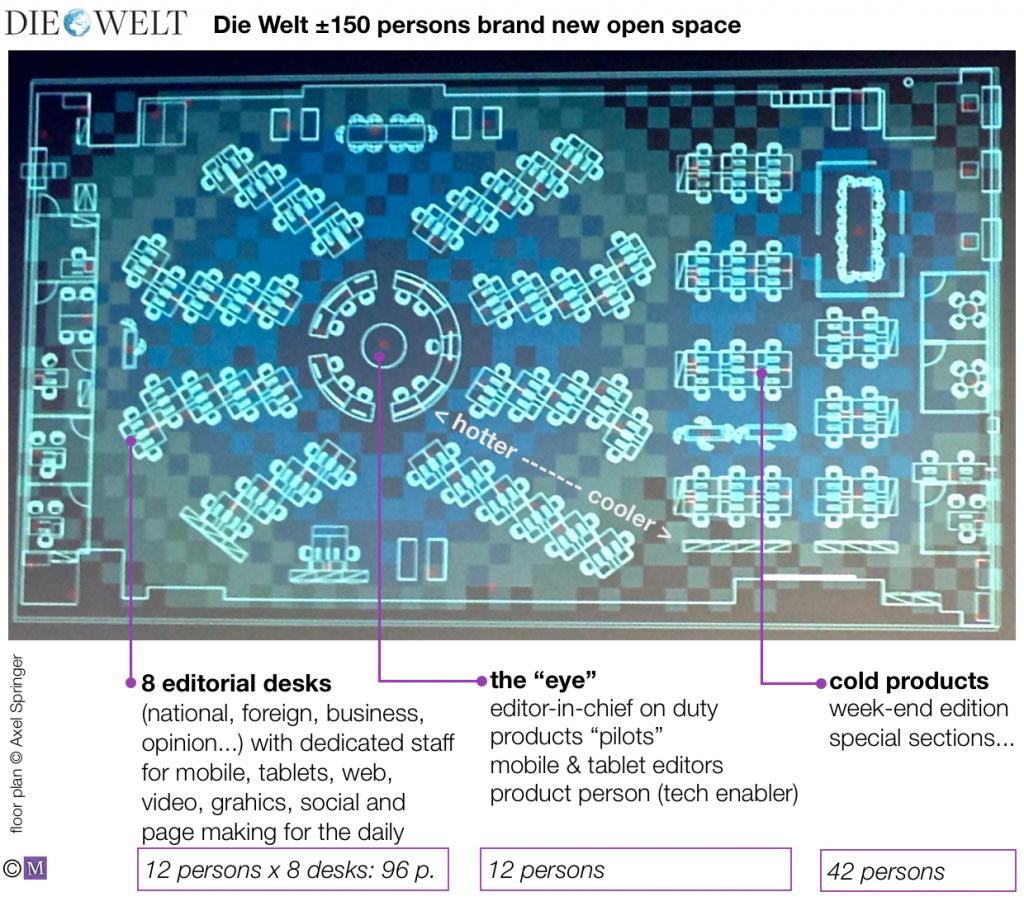 All the sheep (sorry, journalists) are arranged in a circle, and constantly being monitored by the lions (sorry, editors) in the middle. Not only that, but the step layout of the desks means that the person next to you can see everything on your screen right over your shoulder.

Yes, it looks efficient, but it's actually the most problematic workplace setup you can create. It is stress and anxiety inducing by design because you don't give people a chance to breathe. Every moment, people will feel pressured to perform 100% at all times.

And it has been proven again and again that layouts like this makes people "less productive, more error prone, less happy, and more likely to get sick" ... not just from viruses, but very much in terms of stress induced illnesses. In fact, a study from Denmark (sorry, couldn't find the link) found that an office increase from 1 to 8 people causes a 100% increase in sick days.

Worse of all though is that a layout like this is designed to stop people from thinking. Everything about this setup forces people to act on their first impressions. Learning back for a moment, just trying to get a perspective of things, will make people feel guilty because it would seem like they are not working.

Coca Cola has the happiness factory. These newsrooms have stress factories. And sadly, it's a growing trend.

My prediction is that the already extremely high stress problems that exist in newsrooms today are going to get a lot worse. And because people don't get stress all at the same time, a form of social pressure will emerge when someone starts to underperform in relation to others who don't.

This in turn amplifies the problem. It creates a polarized work culture that is absolutely damaging to your company. Instead of getting people to work together (which enhances productivity), you actually make people compete against each other (which reduces productivity).

This is not an office. This is a factory style sweatshop. And it doesn't make your more productive. It makes you less productive, less happy, more error prone, and more likely to get sick.

I will end this with just one simple question: Isn't it strange that when news companies try to embrace the digital world, they focus on creating disconnected factory styled office layouts?

Take Die Welt's newsroom. This newsroom is not designed for digital at all. It's designed for efficiency in a disconnected world where speed is solely a product on physical proximity.

They are trying to embrace the speed of the digital world, by creating an office space optimized for the disconnected world.

People are not robots. We have found again and again that people don't work well in open-office factory type efficiencies. To be productive we need not only inspiring collaborative environments (as opposed to competitive ones), but also personal space and and the feeling of control.