We need to have a serious talk about newspaper associations and their surveys.

Obviously there are bad news associations and there are good ones.

The bad ones are usually the local associations, who are so obsessed with keeping the status quo that it's like they are not even living in the real world anymore. The things they talk about are so out of touch with the rest of society (and their declining readership levels) that you wonder why they even exist.

The good ones are usually the bigger associations, who aren't hampered by the local need to save a few specific newspapers, but can focus on the long term future of the industry as a whole.

One good association is INMA, the International News Media Association. Most of the time they make a lot of sense. But not always.

My recent concern is their latest survey into whether people trust and value newspapers. It's incredibly skewed from everything else that we see, but I will get back to that.

As a media analyst I have access to studies/surveys from three types of sources.

Insight from outside the industry

My first source is the studies done by research groups outside the newspaper industry, such as those from Gallup, PEW, and many other companies like that, as well as studies focusing on issues that aren't directly related to newspapers and magazines (like studies that look at ad-spending, studies that look at what people do with their free time, and so forth).

These studies are wonderful because, instead of having a sample size that is limited to only old newspaper readers, they are based on a sample size from society itself, and thus provide a far more nuanced picture.

And these trends are crystal clear. To give you a few examples:

Gallup found that 'confidence in newspapers' is at an all-time low, and the decline has accelerated over the past 10 years. 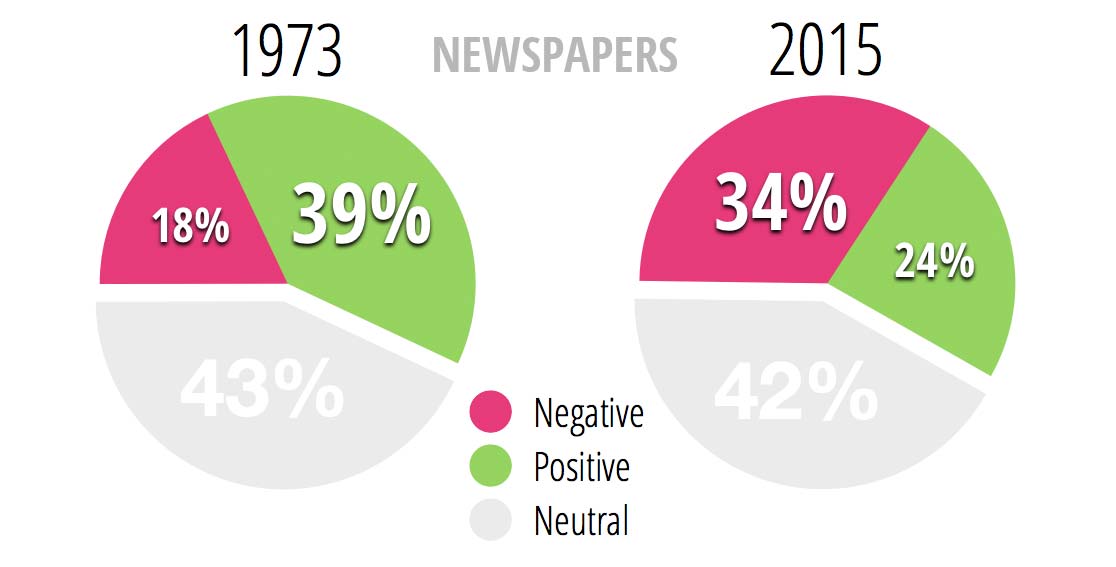 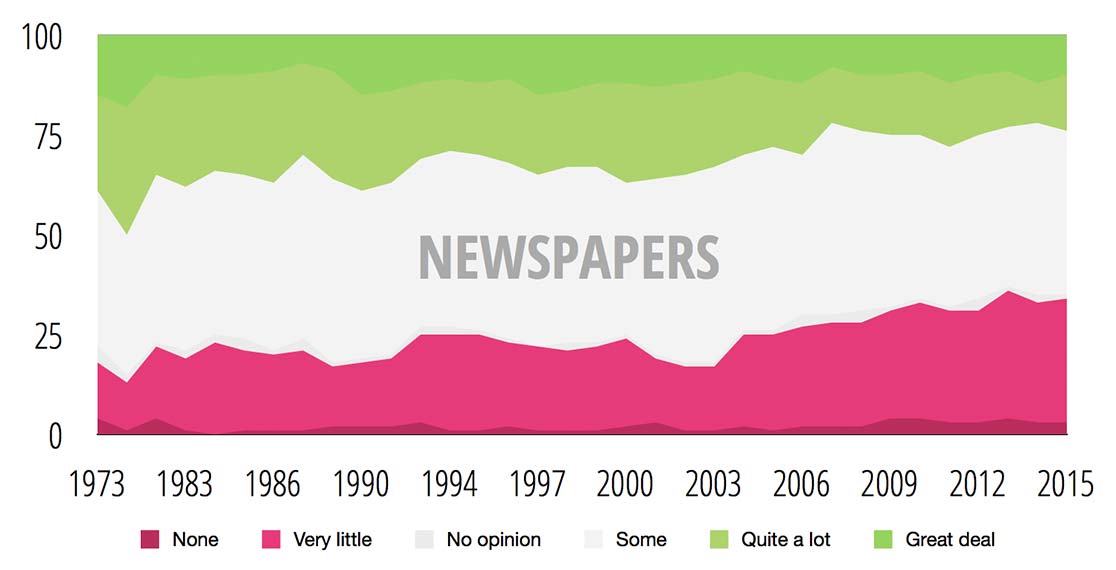 Similarly, in a study looking at where confidence is dropping the most, we see that confidence in print has now dropped to the already low level of news online (which is really bad news for print). 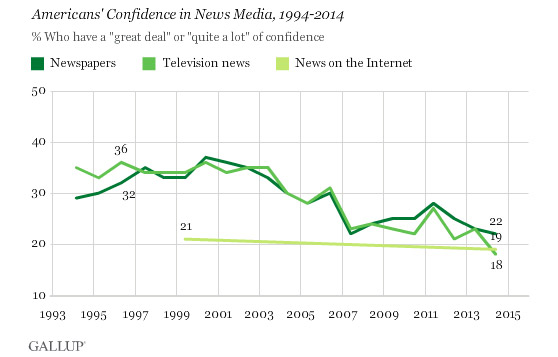 Ofcom, who is tracking consumer behavior, found that the younger you are, the less important newspapers and magazines are to you. In fact, it ranks so low for the 25-34 year old group that it doesn't even reach 1% of what they would 'miss the most'. And this trend is getting worse every year. 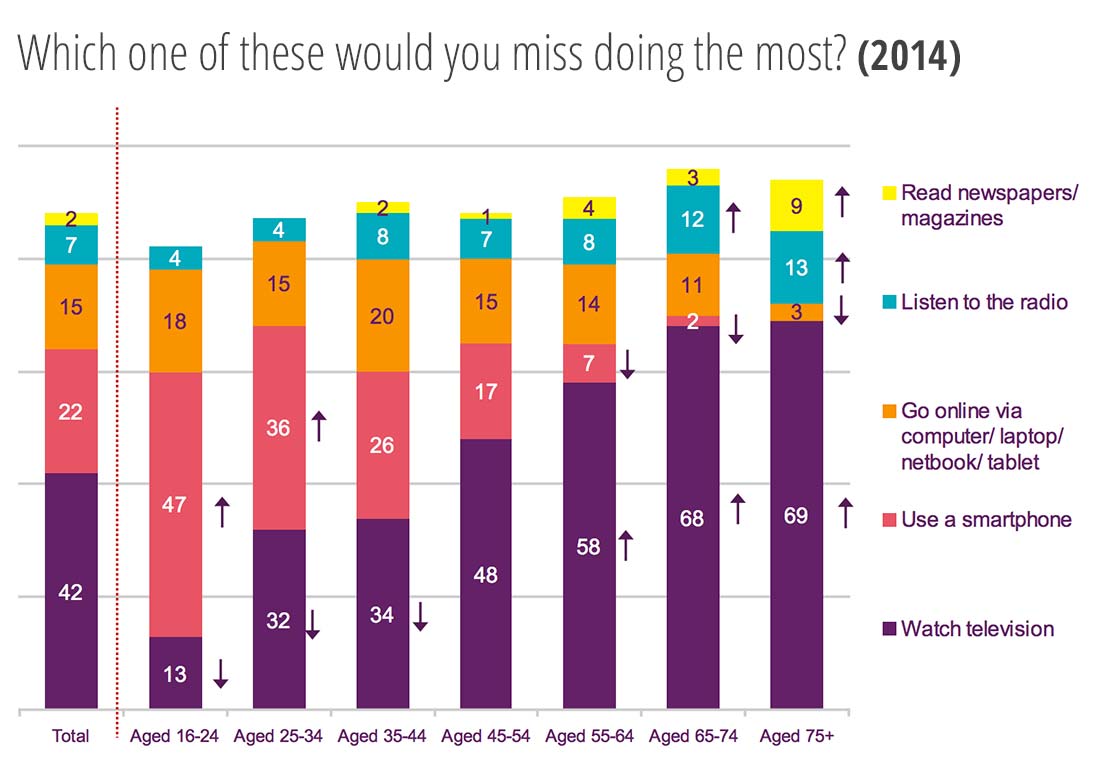 And these are just a few examples. We are seeing tons and tons of studies all pointing towards the same trends.

My second source of studies is those that are shared privately with me via my work as a media consultant. I obviously can't reveal any details from them, but these are extremely interesting in that they are created for the purpose of understanding the market.

Unlike so many other studies that have an inherent bias because they are trying to look at a specific thing, internal media studies often start from a blank slate and thus provide a more accurate picture. The problem, however, with these internal studies is often that the data sample is very limited (or even missing in key areas). So you have to look at them with a 'known-unknown' mindset.

But overall, the pattern that I see is that print is in decline and struggling, advertising is problematic, loyalty is slipping, people feel the articles are less relevant to them personally, and there is a problem with maintaining trust. None of which should come as a surprise if we look at the larger trends.

Just the simple fact that we have so many sources to choose from dramatically raises the bar for what people consider relevant. The more choices we have, the less loyal we feel towards any specific source unless it truly stands out from the rest of the market.

Think about Apple versus Android. Apple stands out thus commands incredible loyalty levels, but for Android phones it's different. People might be loyal to Android as a system, but people often switch between Samsung, LG, Moto X and all the others.

So if you look like all the other magazines and newspapers, loyalty is going to take a big hit.

My third source of studies is all the studies and data we get from the newspaper and press associations. They are actually two different things. Firstly, we have the studies that are based on real-world data, which help us understand exactly how the market is performing.

For instance, we learned from the Newspaper Association of America that print advertising has basically collapsed. 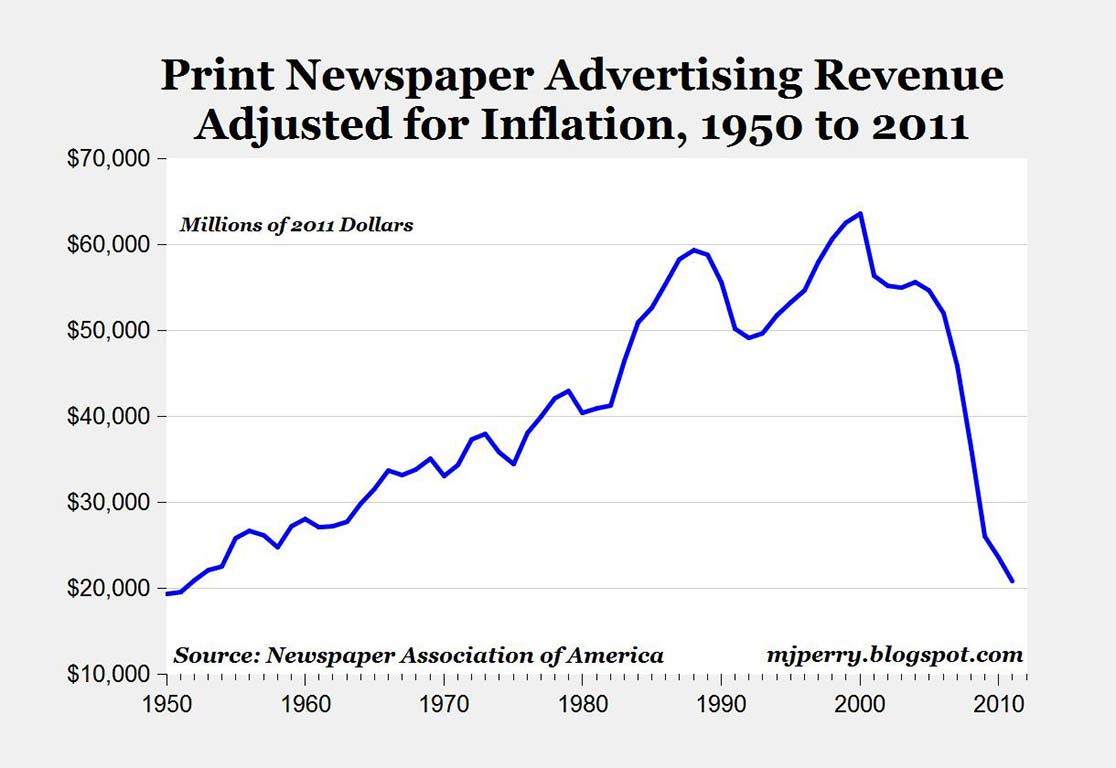 Or we can learn from the newspaper associations in Canada that paid circulation is tumbling down the hill. 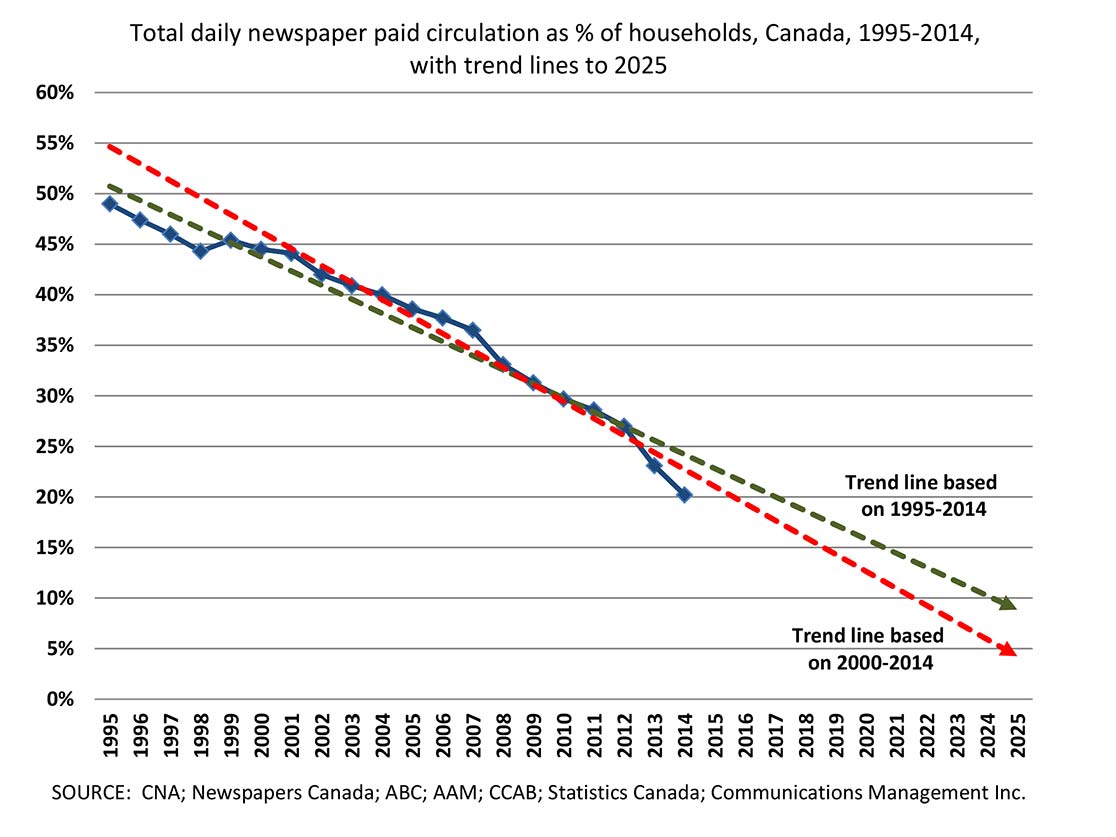 We see the same thing when we look at data from the UK, Europe, and Australia.

It's not all bad, but the trend for the future of print is as crystal clear as any trend can possibly be, as well as the trends for the declining importance and role of traditional media. Their mass-market models prevent them from making the difference they need in a connected world.

So, with all these studies, you would think the picture is clear.

Well, this is where we come across the second type of studies published by News Associations; specifically, the ones based on surveys.

INMA recently published their annual 'INMA Trust & Value Survey 2015', conducted by RAM. Considering all the things I mentioned above, what do you think this study shows? Do you think it is aligned with what we see elsewhere, both from within and outside the media industry?

Nope... the INMA study instead painted a completely surreal picture of a world where print is doing fabulously and there is no need to change.

For instance, it says that 'print is trusted by 86%', which will come as a surprise to anyone at Gallup, PEW, Ofcom, and even those who have done internal studies at newspapers.

It also found that more than 80% engage with print newspapers on a daily basis, but only 12% for Facebook. This will come as a complete surprise to anyone who has looked at the trends for 'time spent' over the past 10 years.

They also found that people like the old ways, and almost nobody is churning.

And based on this, their takeaways are that:

How can INMA say that print is crucial when print circulation is crashing and advertising has dropped to less than 30% of what it was 15 years ago?

So why are INMA's numbers (and similar data from other news associations) so dramatically different to the numbers we see anywhere else? Well, the answer is obvious. They only looked at the exact type of audience that likes print.

In fact, RAM points this out in the study, which INMA conveniently 'left out' of their blog post (but they did include in the press release I received earlier).

RAM executives stress that the sample was predominantly newspaper print readers, which likely paints a different picture of their engagement with social media etc. versus frequent online audiences.

This, of course, is not the first time we have seen this. We see this all the time from all the news associations. INMA isn't even one of the worst.

In the graph below I have taken the data from PEW's State of News Media and the general trends in overall advertising spending by brands. I have then compared those two by fixing the rate to what it was in 2003.

As you can see, in 2007, when the print advertising market crashed, print suffered an incredible blow, while only gaining marginally new income from digital advertising. But look at the green bars. This is how much digital advertising that, proportional to what brands are spending, now goes to digital channels other than newspapers.

And to this INMA is saying: "Digital is increasing, though not to the detriment of print."

What kind of silly Mickey Mouse universe do they live in? Digital is absolutely increasing to the detriment of print. In fact, it is currently decimating it. And, at the same time, traditional newspapers are completely and utterly losing their digital advertising future to other channels.

But I can already hear journalists and editors say, "INMA found that print is still important and that 86% trust in it, so let's just keep doing what we have always done."

The problem here is that the old newspaper reader is increasingly misrepresenting the market as a whole. What's happening to the industry is this: 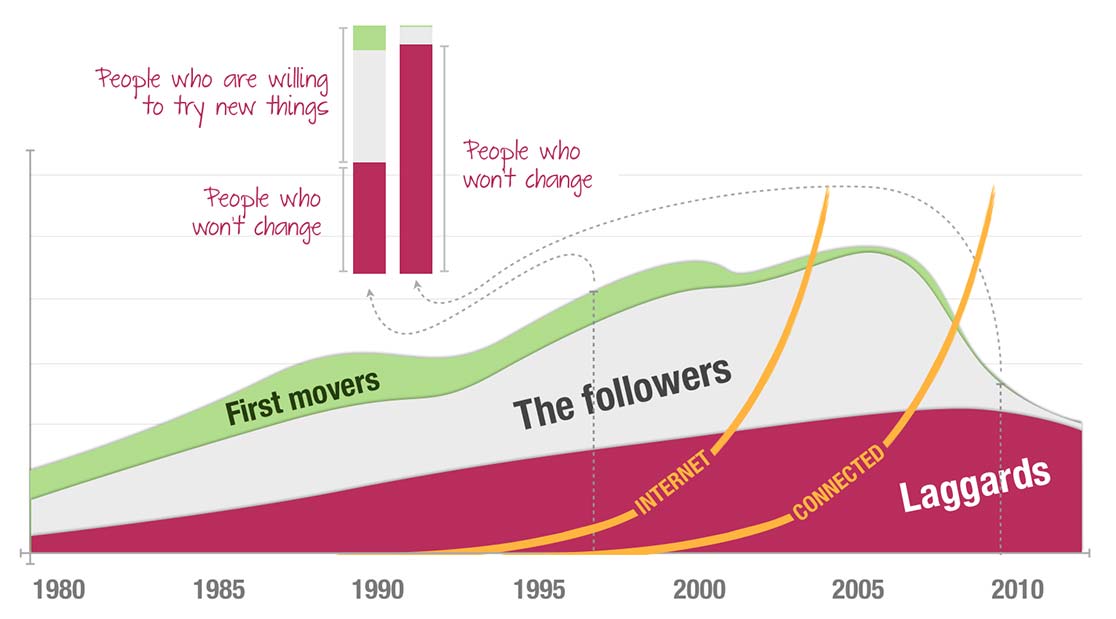 When INMA found that so large a percentage love print, that is not a positive result. Instead, it shows just how bad a situation it is. If every other trend shows that people are abandoning print, but your audience has a large print share, it doesn't mean people love print. It means your audience is dominated by old people who are increasingly behind the curve.

This is not a good thing. In fact, this is the reason why newspapers are in so much trouble. And the newspaper associations aren't helping the situation by publishing studies that try to tell people that print is crucial.

We need to think smarter about this. And we need to stop publishing studies that so completely misrepresent what is actually happening in the market.

If print were crucial and if 86% engaged with print daily, the media market wouldn't be in the situation it is today. You wouldn't need to cut costs as aggressively as you have. And you wouldn't have needed to refocus on digital.

But we all know that isn't the case.