The Value of Momentum And Reputation

In several of my Plus reports, like "Building Customer Momentum and Lifetime Value", I have advocated that brands and publishers should focus much more on building up momentum, rather than focusing on campaigns. And let me show you just one of hundreds of reasons why this works.

The answer is obvious. You get the most awesome market condition that anyone could dream about.

Case in point. Yesterday, the creator of The Oatmeal, which we all know and love for its wonderful cartoons, Elan Lee and Shane Small, decided to create a simple but creative card game called "Exploding Kittens".

And in order to sell this game, they put it up on Kickstarter, hoping to raise a very conservative $10,000.

Here is the intro video:

It's not like the game is cheap either. There are two versions of the game. One is a child-friendly version at $20, the other is a more graphically enhanced version (more horrible/incredible) costing $35. And the more expensive version is the top seller by far. About 5,000 people have bought the $20 version, while ten times that amount (50,000 people) have paid $35.

That's a lot more money that what people usually want to pay for a game.

The only reason why this happened, and why it happened so fast, is because of their momentum. These guys have already proven their awesomeness and their value, so most of their customers didn't even think about it. They just converted by default.

In the marketing world, we usually define the path to conversions as: Awareness, deliberation/consideration, followed by the conversion. But most of the people backing this probably didn't even read the whole Kickstarter page.

In other words, when you have built up momentum, your customers will skip the deliberation/consideration phase. And for a brand, it means you will get an incredible result, almost instantly.

This is the value you gain from building up momentum and building up your reputation. And it's absolutely worth the effort.

It takes a long time, though. The Oatmeal has spent five years getting to the point where they are now. But again, it was time very well spent.

There is one other key element at play here, however.

It is to deliver persistent and recognizable value with everything you do. I cannot stress this enough. One major problem I see with brands, is that your value fluctuate all over the place. You have some products that are really good, but others that are just total crap. This is especially true with how many brands do marketing. It's often just a total mess because you have no purpose behind it. One day you do something amazing, the next day you cheapen the relationship with shallow tactics that people don't care about.

You must have a purpose, and you must stay true to it at all times.

This card game worked not only because it looks good, but mostly because it matches exactly with the purpose of The Oatmeal. It fits with what they have already done before, but in a new and exciting way.

If they had instead done a Kickstarter campaign for, say, a outdoor bird feeder. They probably would have failed. Why would you back that? It has no relation to them?

Every single time you stray away from your purpose, you lose your momentum. Every time your value fluctuates, you lose your reputation. And when that happens, you get stuck in a world where you have to fight for the attention of every single customer, using the most expensive (and ineffective) forms of marketing possible.

Defining your purpose, staying true to it, and then focusing on building up momentum is worth every single second of your time. It can be tough to do (especially in the early phases), and it will usually take a long time (forget about the 3 month campaign goals). But, wouldn't you want to be able to say this? 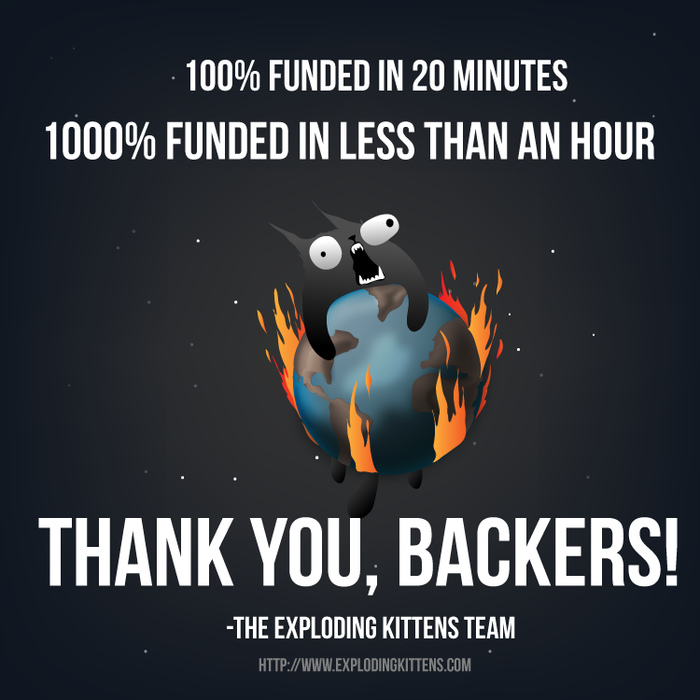 If you are working for a brand where every sale is a struggle, ask yourself: "Where is our momentum?"