There is a whole generation of people who need to change how they communicate with the world. Just this week, Michelin hired TBWA to create a Facebook campaign around their slogan "The right rite changes everything," in an attempt to rebrand the Michelin Man.

Companies like Michelin just don't get it. That kind of thinking will get you nowhere on the social web. The world doesn't work that way anymore. We don't want to connect with a slogan. We don't follow a logo. We don't care about your message.

To illustrate just how drastically the world has changed; I created this short story (which you can also download as a PowerPoint or Keynote presentation below.)

Twenty years ago, marketing was a one way street. A company created something that they thought they could sell, and then spent an enormous amount of money on ads in newspapers, magazine, billboards, and on TV.

Because this was the only way to get mass information, it kind of worked. We were impressed by fancy full page ads with cute images, or huge billboards. 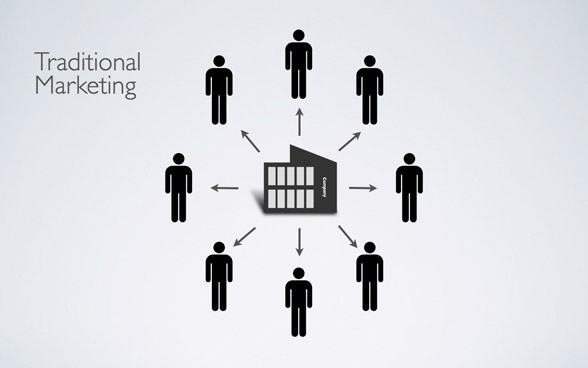 But, the problem was that there was no communication. You could see the ads, but you could not respond to them. You couldn't provide feedback. It was like watching a (often) really boring art show.

Then came the internet. And it brought with it the ability to interact with people. You could create a campaign that people could respond to. Create surveys or interactive experiences.

It was every marketers dream. To be able to fully immerse people in your campaign were like having a virtual amusement park at your finger tips. Can we all say interactive bonanza? Weeeeeee! 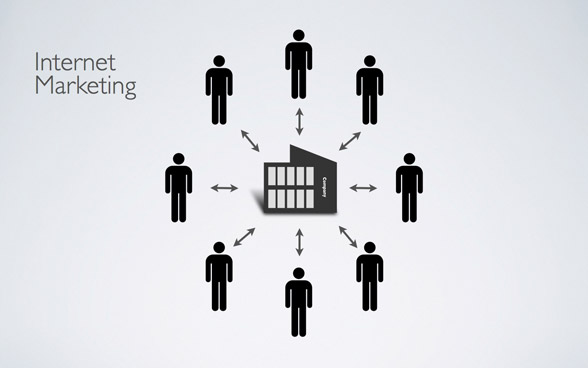 Companies suddenly faced the power of the crowd. In the past, all the difficult questions could be handled without anyone knowing it. And the marketers could focus on what people should see and how they should see it.

Now they had to handle it in public, and that was incredibly scary. So they created moderated forums, where people could ask questions, and you could delete the bad press. They added comments to their website, but only showed the ones that they approved of.

The Start of the Revolution

Of course, this wasn't what the crowd was thinking, so they decided to take it to the next step. There was no point in interacting with a company, who made it hard to have a real conversation, when you could interact with other people instead.

Instead of asking a company what their products was like, they would ask their friends. They would read blogs made by other people, write comments on other blogs. 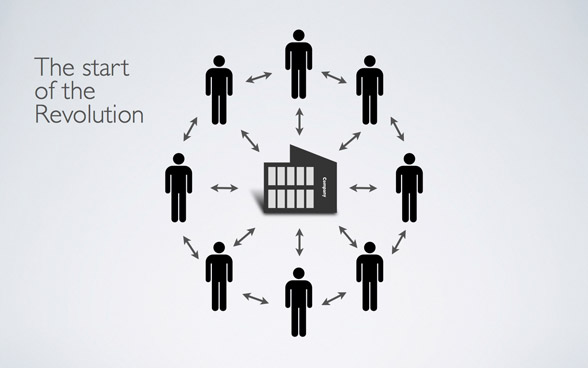 This was the first of two major turning points. In the past companies could decide what to tell, and when to tell it. And when people had a question, the marketers were the one who answered it.

Life was easy. Life was safe!

The internet changed that. Because when people realized that they could use it to connect with other people, then the companies suddenly had to be just as good as their ads. If your product weren't as fast, or as solid, or as impressive as you made it out to be, then everyone would know about it.

Mediocrity wrapped in a shiny package, was no longer an impressive product. It was simply a boring thing, that you tried to look better than it really was.

On the internet, your biggest competitor is not other companies. But, the quality of your own products, and the authenticity of your message. Ads are no longer the way to sell more products. Making better products, and changing who you are as a person, is!

It's not about how you market your products; it's about why you created it.

Stage 2 of the revolution-The Social Web

The shift in marketing, caused by the internet, is only the very first step of the social revolution. The second step is happening right now all around us.

Shortly after people realized that they could use the internet to discuss topics with other people, they also realize that they didn't really need the companies at all.

Here, we have the most impressive communication tool of all time, the internet. So why not use it to do things that really matters to us? Like being with friends, connecting with people that we admire, sharing what we like, being part of something, use it to tell the world who I am, what I can do, what I think, and get instant feedback.

Maybe even do something together, no matter where or when.

The internet changed how people experienced communication. In the past it was one way, or controlled via external points (like a company websites.) The social web is about multi-faceted communication. Where you follow people, and people follow you. And you sit in the middle of this incredible network of people and ideas that matters to you. 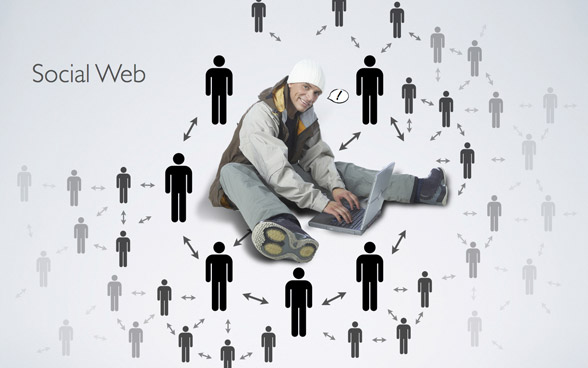 The reason people went online in the past was so that they could see things, experience things, and search for things. The reason people go online today is to be a part of other people's communication. To be connected, to be there, to be available, and to be in it.

This is an incredibly shift in mass communication. In the past it was about the message, the format, and the product. Now it's not about that at all. Who cares?

Marketing is no longer about things. It's about people, and how it brings people together. People have taken over completely. Companies, and their products, don't have a place in it. We went from companies being in control of the message, to not even be a part of the message itself. 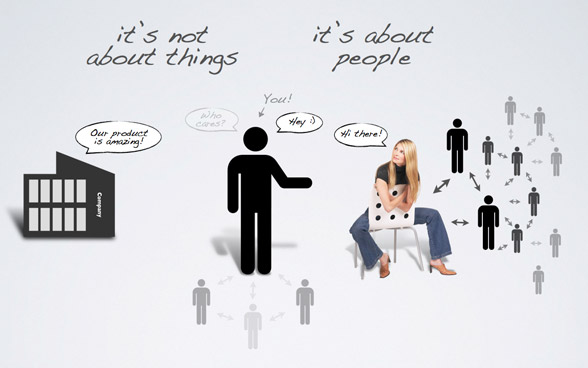 This second shift, is so disruptive to traditional marketing that the entire industry is in a panic. Every marketing departments and advertising agencies in a wild frenzy to come up with ideas of how to get the regain the power to impress people.

And almost all of them don't get it. It's not coming back. Going on Facebook isn't solving the problem. Creating a Twitter account isn't the way to make your products look prettier. Putting your ads on YouTube won't change things.

Just look at Michelin. They hired an exceptionally expensive advertising bureau, and uploaded this ad to YouTube. After 10 days it has an insignificant 6,780 views, which for a company this size is pathetic (they have 177,500 employees.)

That is not all, because there is no way that people will go back to not being in control. 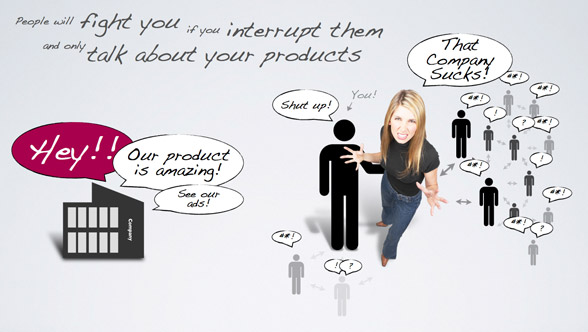 ...and that's not a good thing. Definitely not a good marketing strategy.

How to become a part of the social world?

While traditional marketing is a disaster in the social world, the social web itself is actually the best thing that has ever happened. If you forget about traditional and do it right, then it becomes the most powerful and influential tool you ever had.

The social web is cheaper, faster, much bigger, more powerful, direct, up-close, and far quicker than anything in the past. The social web is filled with people talking about companies and products. 20% of all discussions are brand related.

The big question is then, how do you do it right? How do you become a part of people stream. How do you connect?

And the answer is very simple ...You get invited!

You are not a company that sells a product, but a group of talented individuals. Who are creating something remarkable! Because the world need something better, more stylish, and more affordable.

Something that makes you happy, and gives you that really good feeling inside your stomach.

You do not market your products ...You share them!

And you share what people are doing with them. You make your fans remarkable!

You help them do things better, provide tips and ideas. You tell them about what inspired you, and continues to inspire you!

You ask your fans what they need. So that you, with their help, can continue to be remarkable.

This way, people want to follow you, because you are worth following.

If you do it really well, then people will return the favor and turn into fans. And instead of a guest, you become a friend. Someone that they will tell their other friends about. 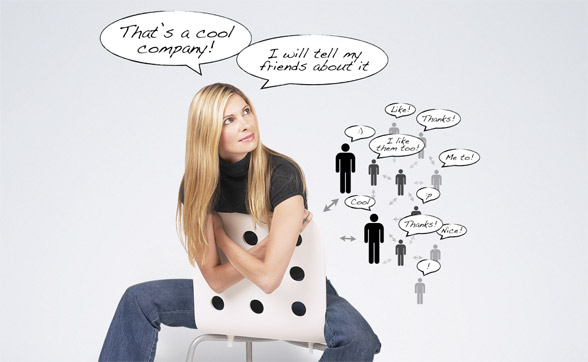 See this presentation over at Slideshare